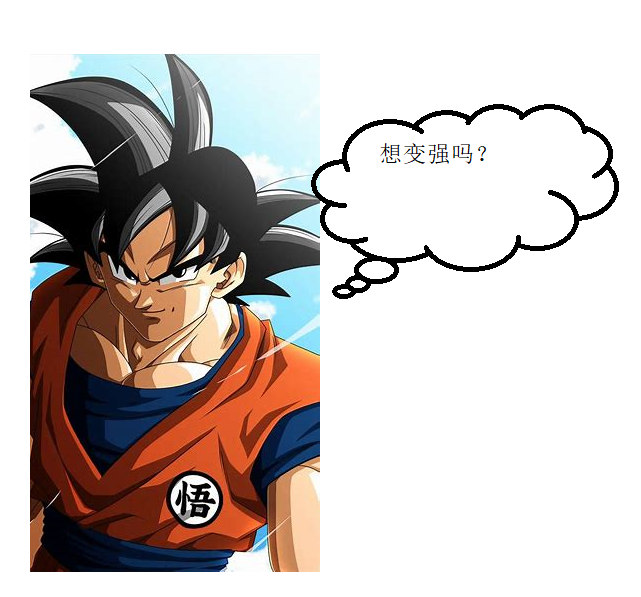 1. Concept and application of sorting

Sorting is the operation of arranging a series of records according to the small, increasing or decreasing of one or some keywords.

It is assumed that there are multiple records with the same keyword in the record sequence to be sorted. If they are sorted, the relative order of these records remains unchanged, that is, in the original sequence, r[i]=r[j], and r[i] is before r[j], while in the sorted sequence, r[i] is still before r[j], then the sorting algorithm is said to be stable; Otherwise, it is called unstable.

Sorting of all data elements in memory.

There are too many data elements to be placed in memory at the same time. According to the requirements of sorting process, the sorting of data cannot be moved between internal and external memory 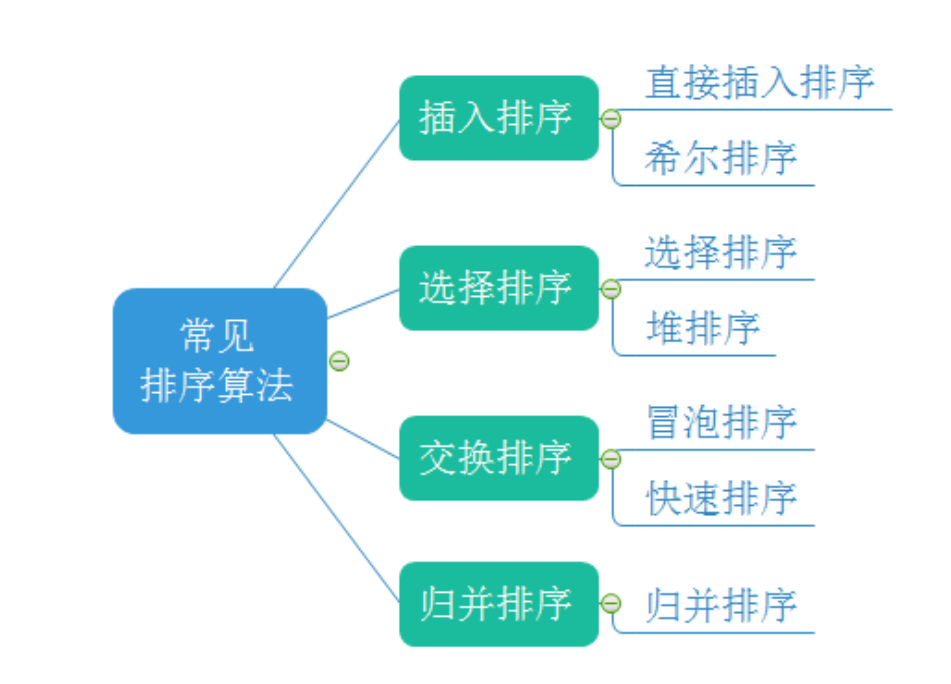 1. The phenomenon observed from the figure is that if the latter number is not smaller than the previous number, there is no need to insert. The action of not inserting is to break out of the loop
2. If the previous numbers are larger than the pos value, move the first n numbers back until they are smaller than or equal to the pos value. You can use loop control. Here, you need to judge again to prevent crossing the boundary

The basic idea of insertion sort is: 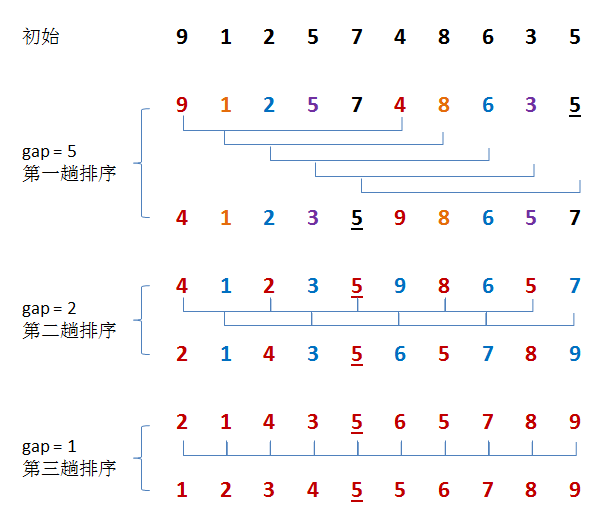 Time complexity analysis:
In the worst case, in reverse order, when the gap is very large - O(N). When the gap is very small, it should be O(N * N), but after the previous pre sorting, the array is very close to order, so the insertion sorting with gap interval can be understood as very close to O(N). Look at the statements that the outer loop affects the number of cycles, gap = (gap / 3 + 1);,
When gap / 3 / 3 / 3... = = 1, the expansion is followed by 3 ^ x = gap, so the number of times the outer while loop is executed is x times,
Then the overall time complexity of the algorithm is O(log 3 (N) * N),
log 3 (N), the logarithm of N based on 3

Basic idea of selection sorting:
In the process of traversing the array each time, select two subscripts in a loop to find the maximum and minimum values, and exchange the large one to the right and the small one to the left 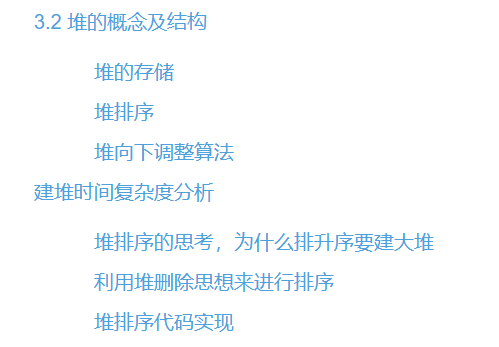 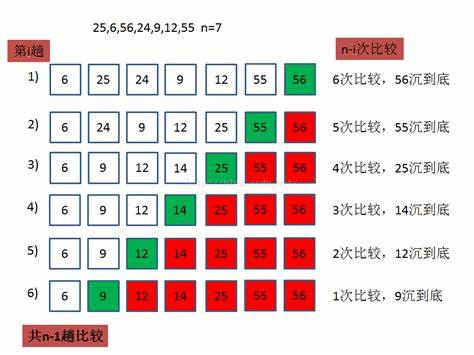 Compare the small ones to the front and the large ones to the back. You only need to compare n - 1 times to sort n elements. Each bubbling trip is less than one element

Process:
1. The key is selected by single pass sorting. Generally, the position of the key is selected at the position with the subscript of 0 in the array, both the leftmost and rightmost
2. Exchange small values to the left and large values to the right. Finally, put the key in the correct position to ensure that the value on the left is smaller than the key and the value on the right is larger than the key 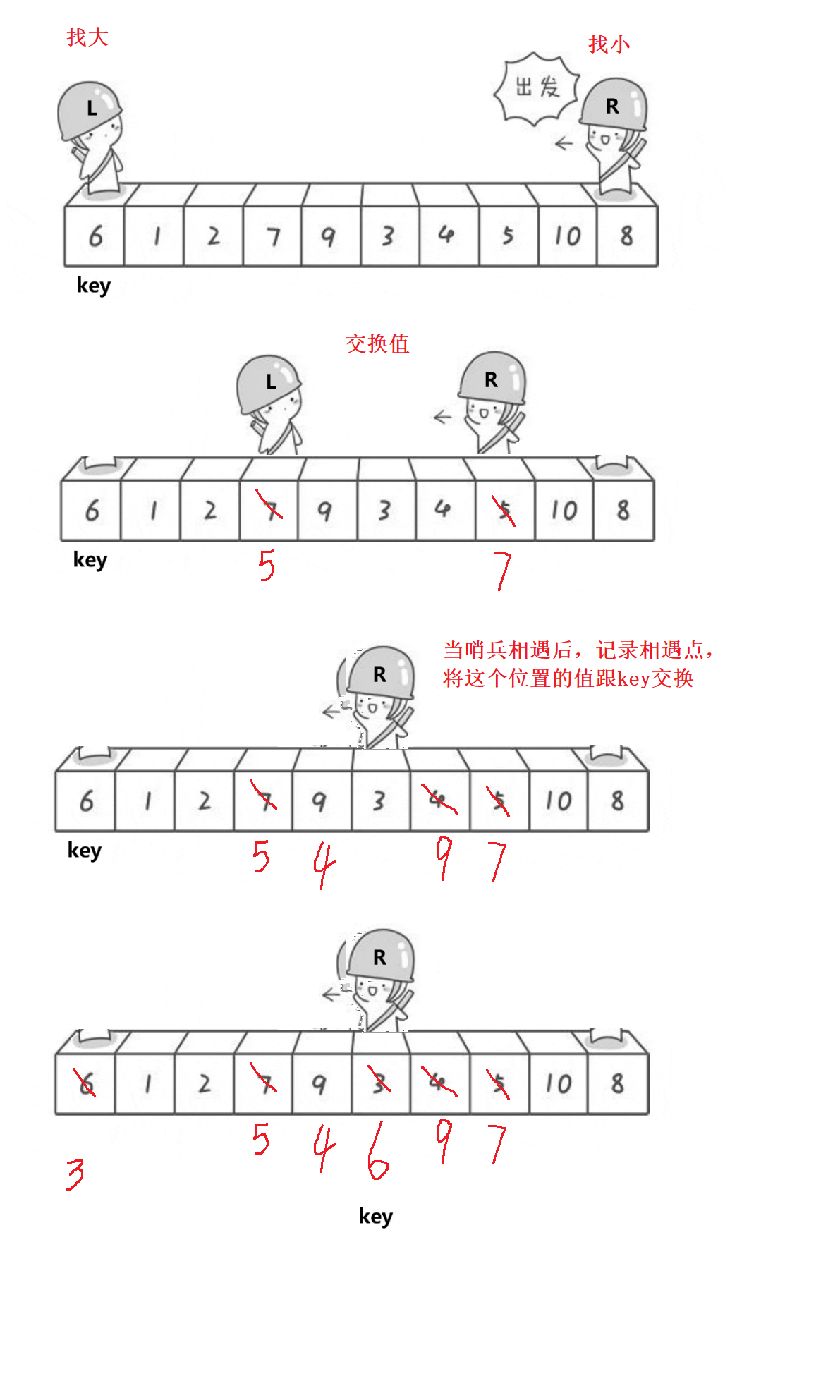 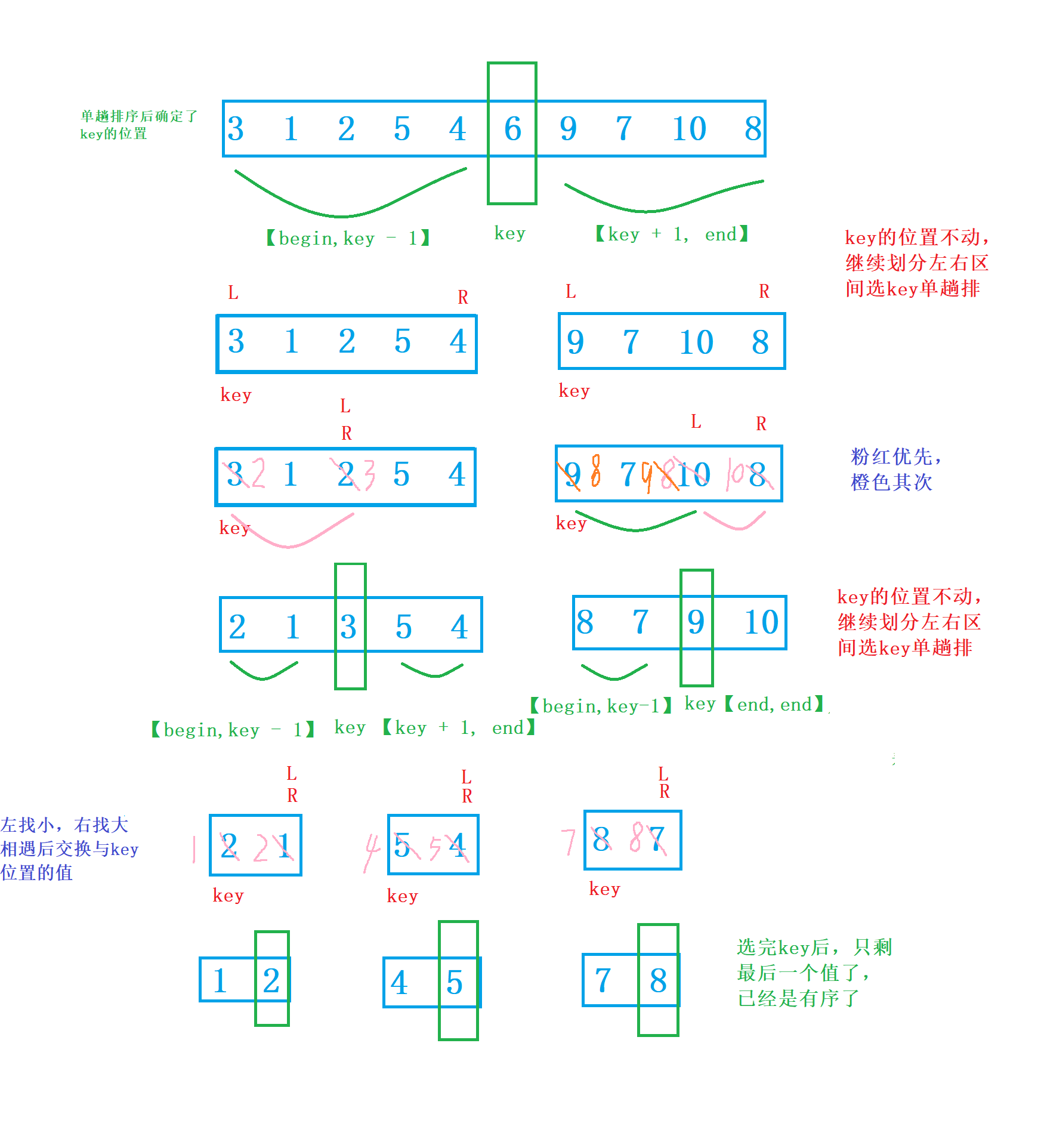 Basic idea:
Select the first position as the key, so as to form a natural pit. Look for a value smaller than the key on the right. After finding it, fill the value into the pit. You become a new pit. Look for a large value on the left. After finding it, put the value into the pit on the right. You become a new pit. Repeat until you meet. The meeting point is also a pit. Put the value of the key into the pit, In this way, the position of the key value has been determined in a single row 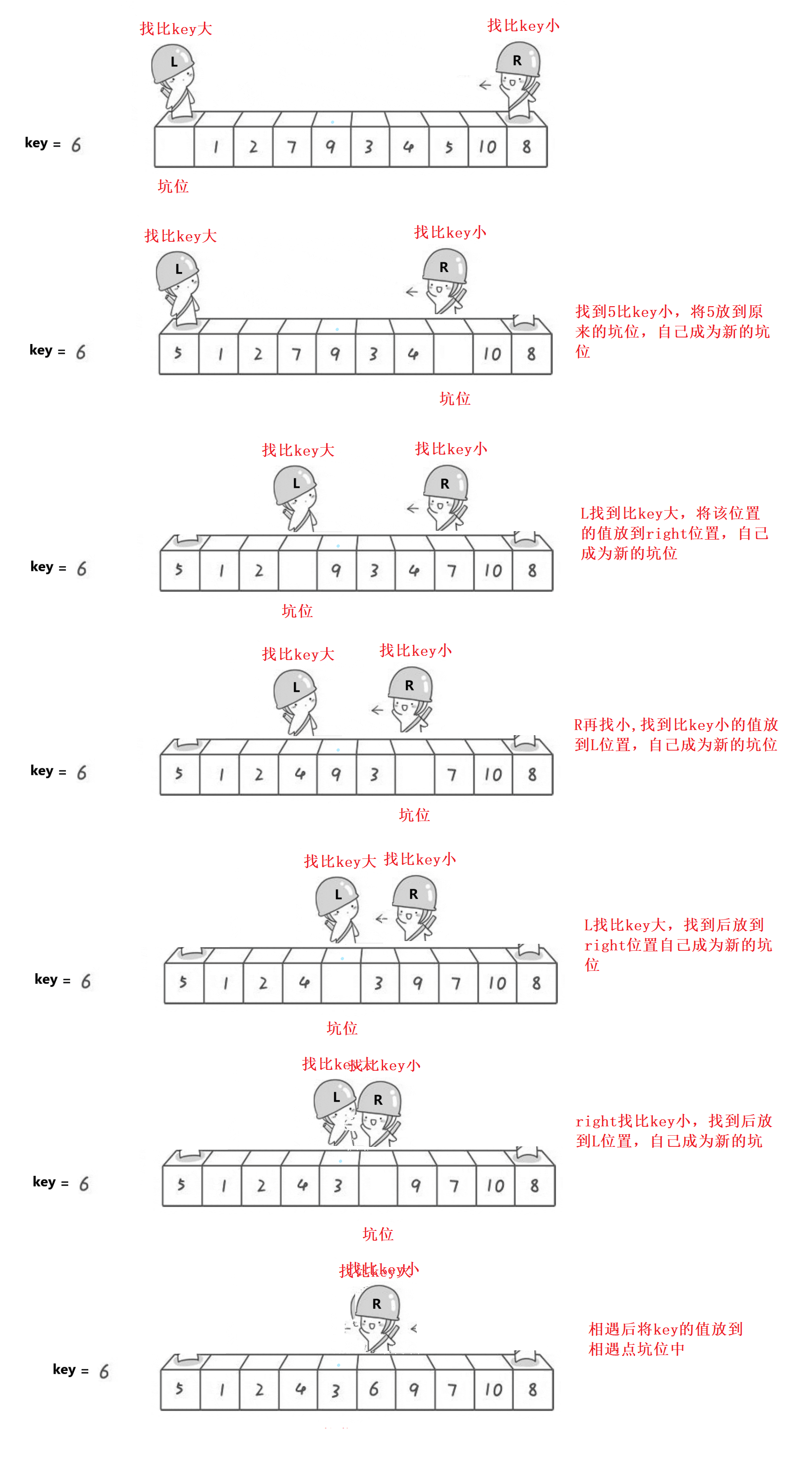 The preliminary single row has been determined, and the key has been placed in its correct position. The left side of the key is smaller than him, and the right side is larger than him

Front and back pointer method

Basic idea:
Double pointers. After defining prev and cur, cur looks for a value smaller than the key. After finding + + prev, exchange cur and prev until the array is traversed. Finally, exchange the value of key position and prev position, so as to determine the position of key value 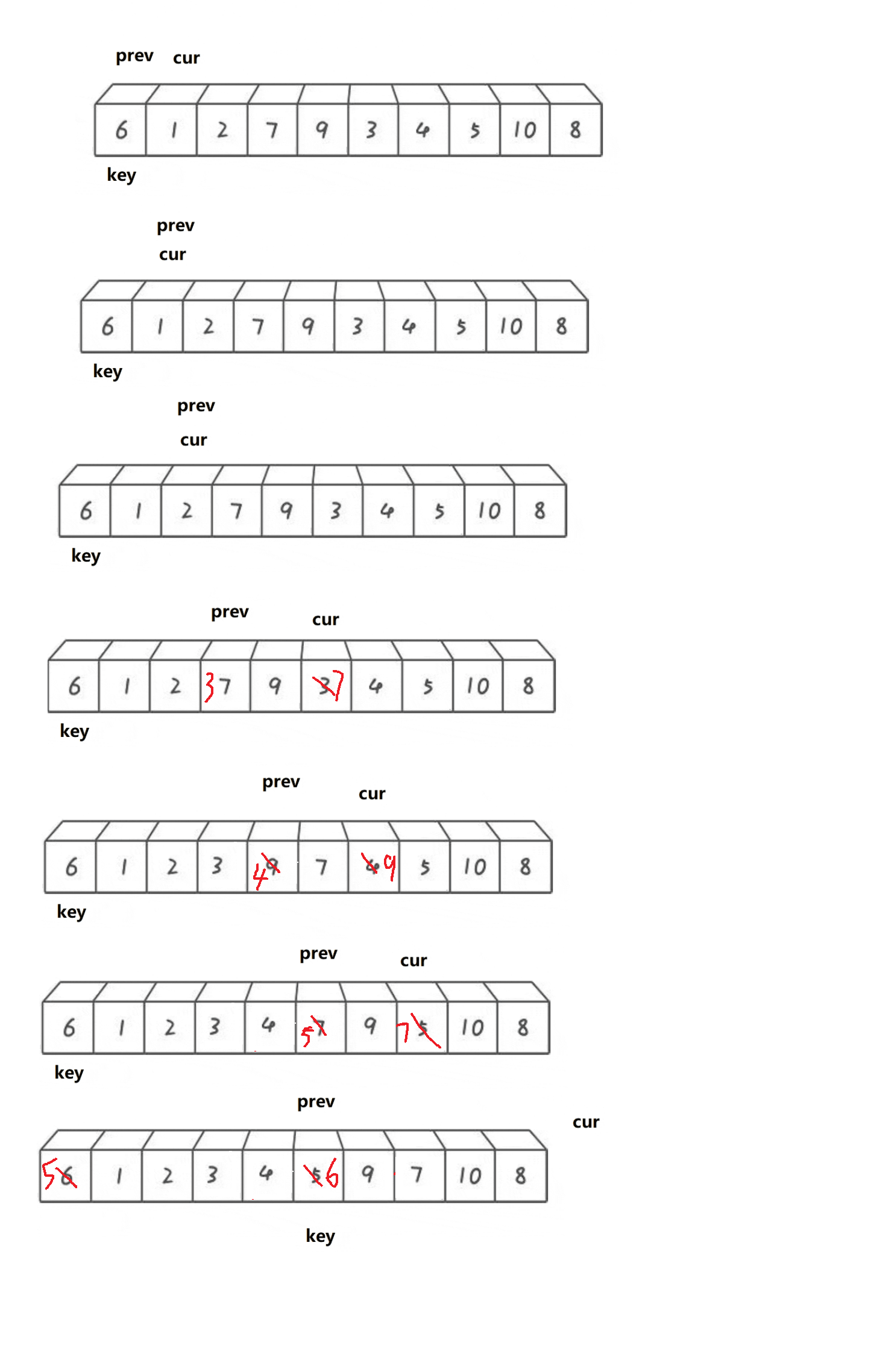 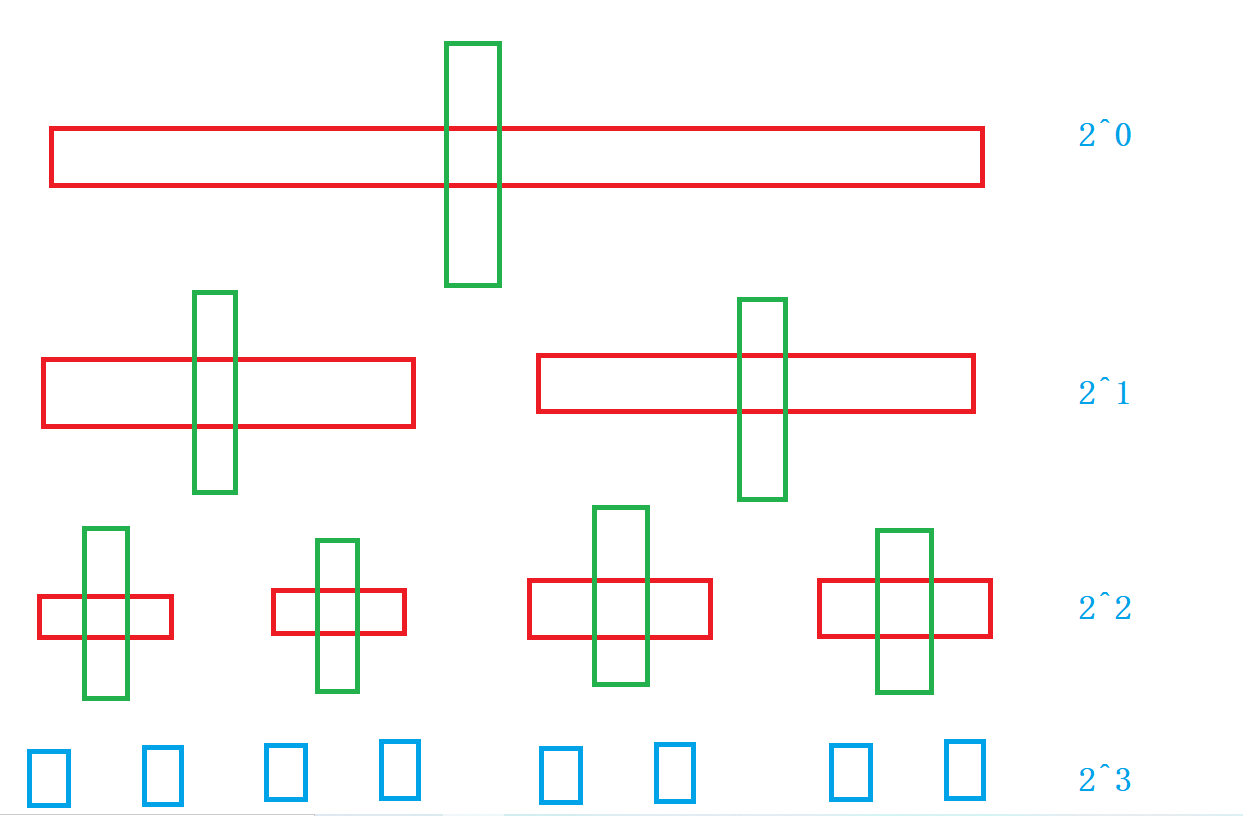 From the figure, we can see that a single row of fast rows, whether right meets left or left meets right, can only take the array length N times in total. Each time a key value is selected to divide the left and right intervals, the single row determines the position of the key value and recursively divides the left and right intervals. The depth of recursion increases by 2^N, so its time complexity is O(N * log N)

Consider the worst case scenario:
If the array is already ordered, whether right meets left or left meets right, you have to take n-1 steps every time to select the position of the key. Then its execution times is an equal difference sequence, so the time complexity is O(N^2). How to optimize it? 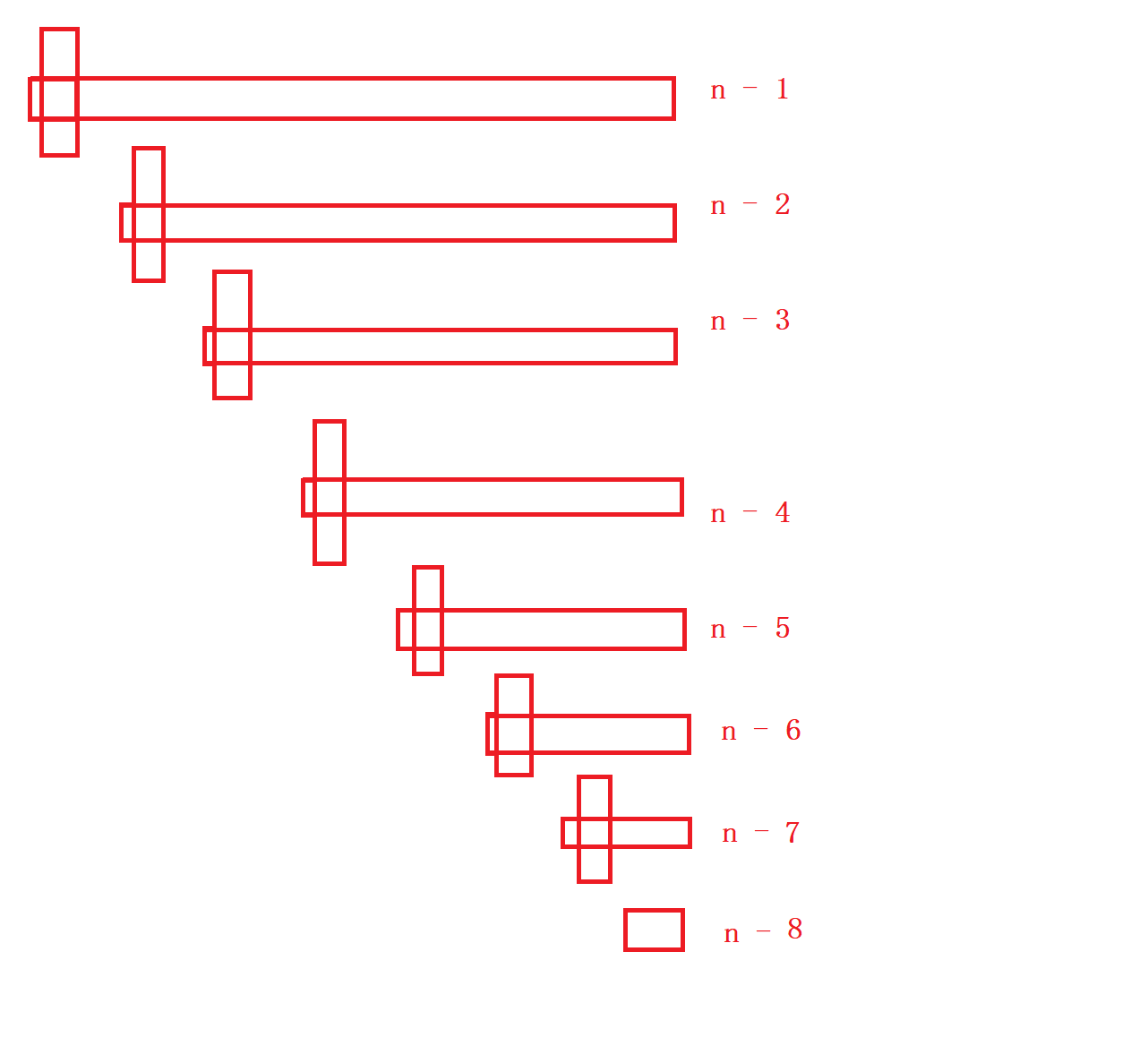 Optimized for fast scheduling:
Thinking: the key that has the greatest impact on fast platoon is the selected key. If the key is closer to the median, the closer it is to two points, the higher the efficiency

Find out the median in this interval so that each key is selected as the median, so there is no need to consider the bad situation of order

Why is there a non recursive version? There are some problems that can not be solved by recursion in some scenes, so non recursion is needed
Non recursive implementation idea: since the C language library does not have a stack, you need to implement a stack yourself. If you need relevant code, you can click this link: Stack implementation It is not difficult to realize non recursion. You only need to understand the recursion principle of fast scheduling. The recursion idea of fast scheduling is to select the key for a single interval and determine the position of the key. Then, the left interval of the key and the right interval of the key are recursively divided to determine the position of the key. There is only one value left. In this way, the array will be orderly, Have you found that the two steps described in the description are nothing more than selecting keys and sorting a section of interval in a single pass until only one value remains, so you can be orderly. Therefore, you only need to simulate the recursive process with a stack, save a section of interval in a stack, take the interval out of a single pass, select the position of keys, and constantly divide the left and right sections, and finally only one value remains, Arrays are ordered

Basic idea:
Merge sort is an effective sort algorithm based on merge operation. It is a very typical application of divide and conquer. The ordered subsequences are combined to obtain a completely ordered sequence; That is, each subsequence is ordered first, and then the subsequence segments are ordered. If two ordered tables are merged into one, it is called two-way merging. Core steps of merging and sorting: 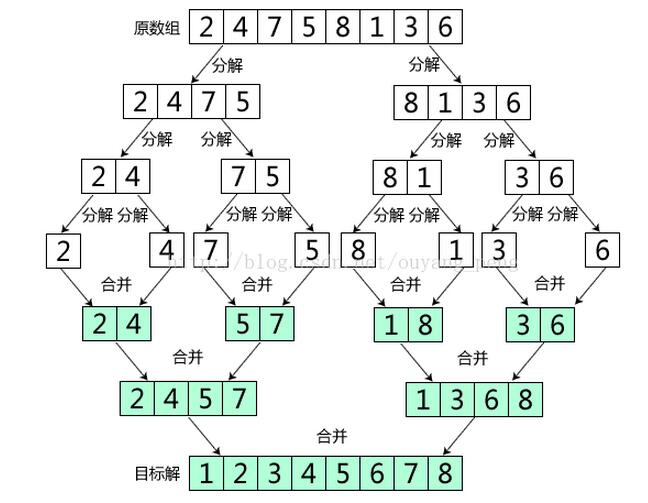 Select the middle position and recurse the left and right intervals. When there is only one value left, there is no need to recurse. Copy the smaller values in the left and right intervals to the temporary array, and then copy the values of the temporary array to the original array. In this way, the intervals are orderly.
To put it simply, if you want the whole interval to be orderly, you must constantly dismantle the molecular interval, make the sub interval orderly first, and then merge the sub interval to make the whole interval orderly. The following figure identifies each section with different colors. When cells are merged, they will be replaced with another new color

It can be seen from the figure that N elements will be decomposed N times, and there are N elements in each layer. The depth of recursion increases in logN, so the time complexity of merging is O(N * log N), but the only regret of merging is that its space complexity is O(N), because it needs to open up an additional temporary array.

When using recursion again, because it is the idea of post order traversal, it is necessary to decompose the left and right intervals into one value before starting to retreat and merge. Now, if you change the loop, you don't need to consider whether there is only one value left in this interval. You can control the sorting process by adjusting gap. Gap represents the number of elements in the interval. Of course, the drawing here is full, There are still some other situations that will be explained one by one later 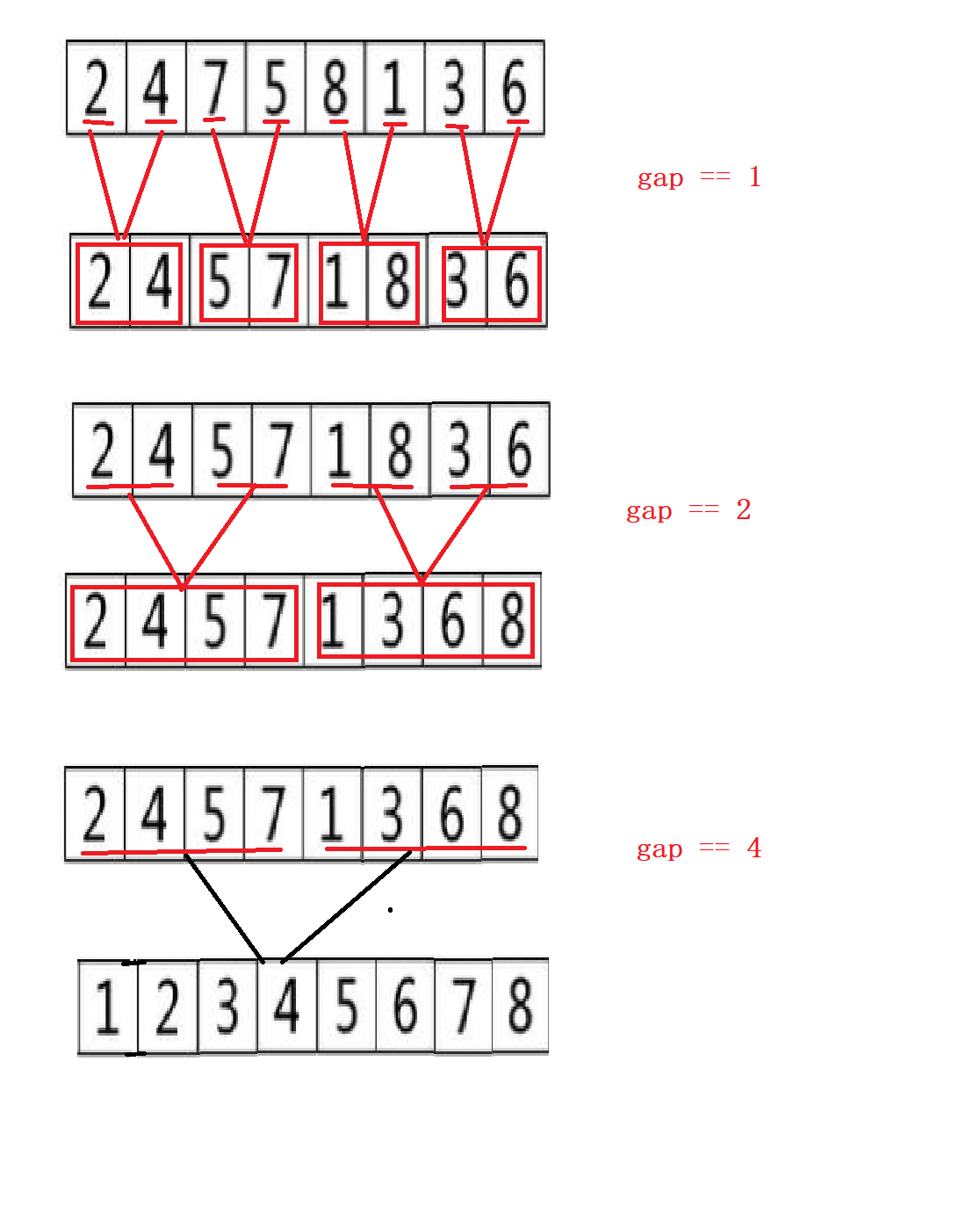 Consider adverse conditions
1. The second interval does not exist
When gap == 1, but if there is no right interval, it will not return directly and jump out of the loop to prevent access from crossing the boundary 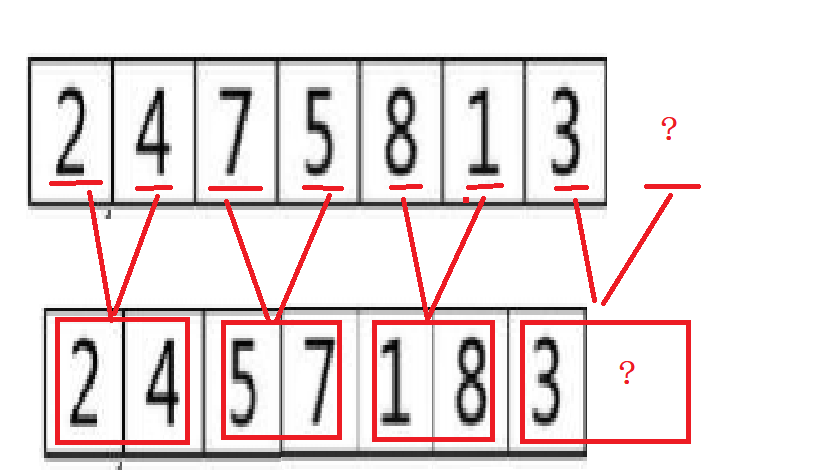 If the right interval does not exist 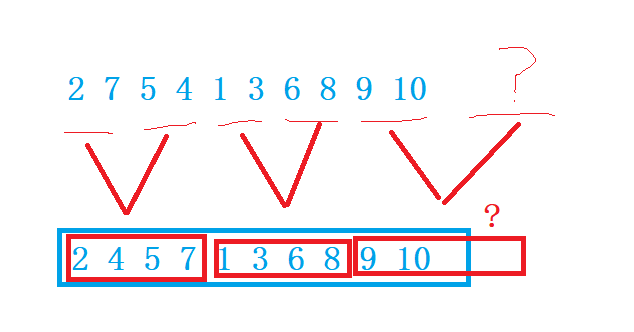 There are not enough gap s in the right section, and the end position may be out of bounds, which needs to be corrected

Left interval is not enough gap

Special summary of merging and sorting:

Observed phenomena:
1. Count the occurrence times of the same element, time complexity O (N)
2. According to the statistical results, the sequence is recovered into the original sequence
3. Need to open up a temporary array to store data, space complexity O (N)

Of course, if the amount of data is large, the temporary array that needs to be opened may be larger. These are consumed. How to solve them?
Let's first understand two concepts

Absolute mapping: count the number of occurrences of each number. The value of A[i] corresponds to the value of the count array position++ 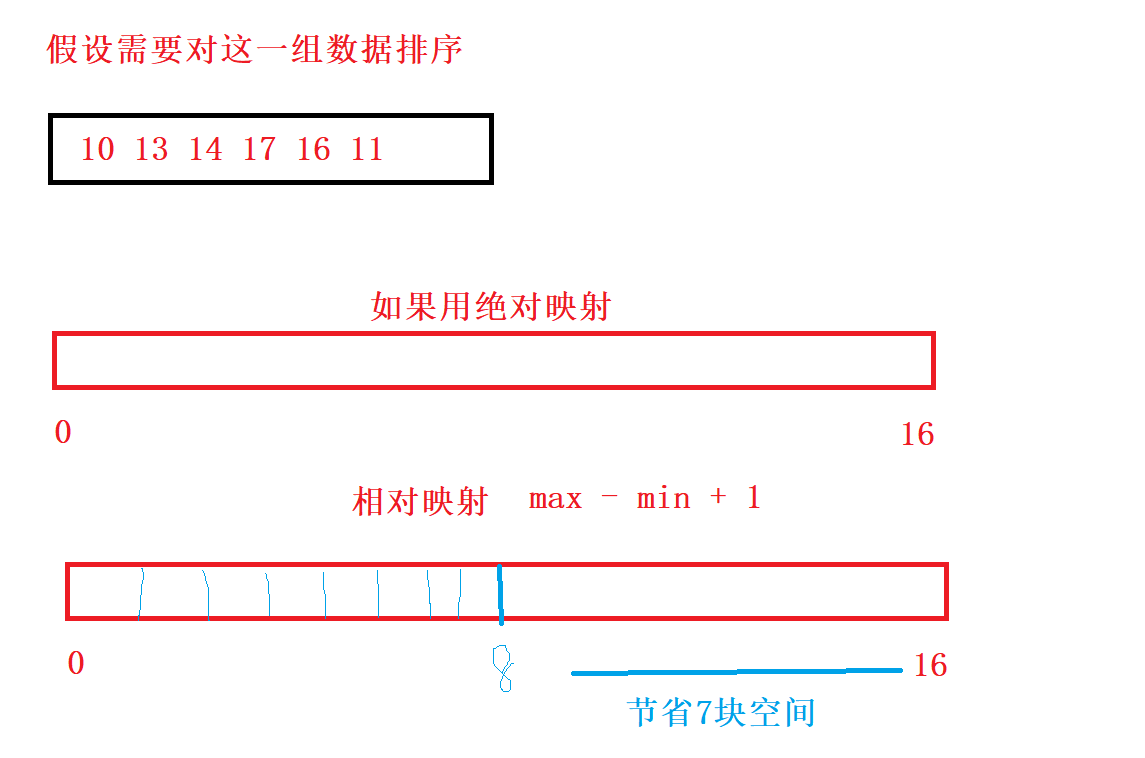 Summary:
Count sorting can be done by either relative mapping or absolute mapping, but there will be some waste by using absolute mapping, and relative mapping will not
1. Time complexity O(N + range)
2. Spatial complexity O(range)
3. Counting sorting is only suitable for a group of data. The range of data is relatively centralized. If the range is centralized, the efficiency is very high, but the limitations are also here, and it is only suitable for integers 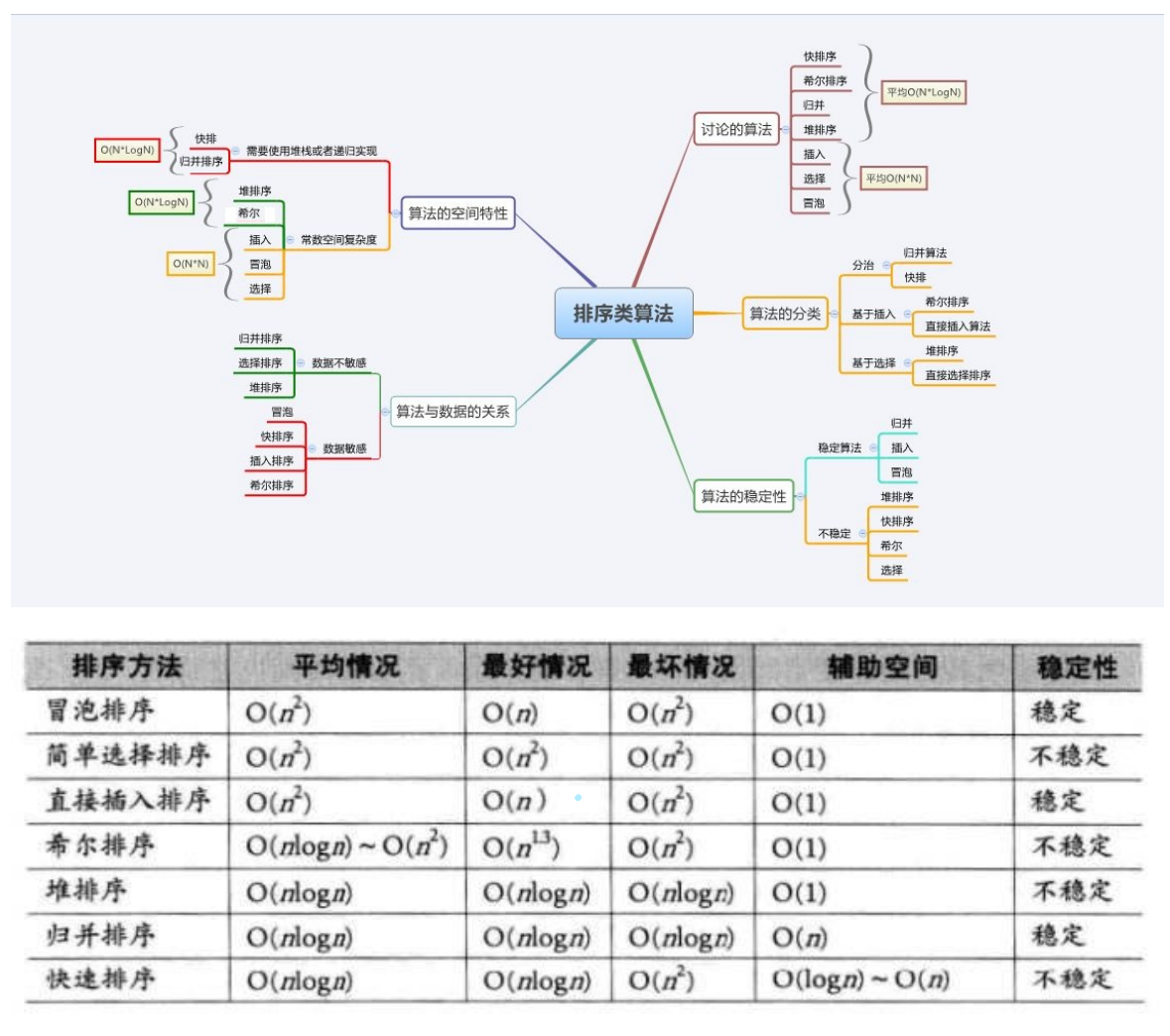 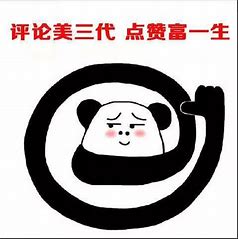