I What is the pointer

I What is the pointer 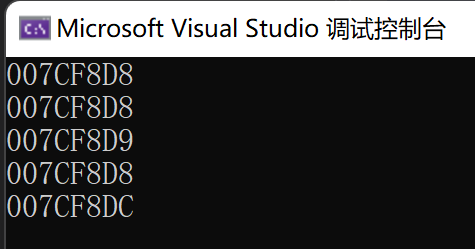 The running results of the program are shown in the figure above:
We found that the printed address of pc+1 is 1 more than that of pc, that is, 1 more byte, that is, one more char type. Compared with pi, pi+1 has 4 more bytes, that is, an int type. The extra part is the same size as their pointer type, so it can be concluded that the pointer type determines how far the pointer can go, that is, the step length

The memory changes are shown in the figure above. We obviously observed that when * pc=0, only one byte of memory is 0, while * pi=0 actually makes four bytes of memory 0.
So it is concluded that the pointer type determines the permission of pointer dereference.
For an integer array, use the integer pointer for the operation of one element per element. If you want the operation of one byte per byte, use the char pointer

Concept: Wild pointer means that the position pointed by the pointer is unknowable (random, incorrect and unrestricted), just like a wild dog

How to avoid wild pointer

1. Initialize pointer
2. Be careful that the pointer is out of range
3. Place NULL in time after the pointer points to the space
4. Check the validity of the pointer before use
5. Avoid returning the address of local variables

The addition and subtraction of pointer variables is to add and subtract the stored address.

1. Pointer - the pointer gets the number of elements between two pointers
2. The premise of pointer subtraction is that two pointers point to the same space

We rewrite the code:

Prove that p+i produces the address with subscript i

As like as two peas, the address of &arr[i] and p+i is identical, so it can be determined that the address generated by p+i is the address of the array with subscript i, that is, p+i=arr[i].

Shaping array: store shaping
Character array: store characters
Pointer array – an array of pointers
For example: int * Parr [5]// Int * indicates that the type of this array is an array of integer pointers

End of this chapter. If you want to have a deeper understanding of pointers, you can see the later advanced pointers