Feature engineering transforms raw data into more representative data prediction model The process of features of potential problems can be realized by selecting the most relevant features, extracting features and creating features. Among them, feature creation is often realized by dimension reduction algorithm.

The first step of Feature Engineering: understanding the business

Filtering methods are usually used as preprocessing steps, and feature selection is completely independent of any machine learning algorithm. It selects features according to the scores in various statistical tests and various indicators of correlation.

This is to filter the class of features through the variance of the feature itself. For example, if the variance of a feature itself is very small, it means that the samples have basically no difference in this feature. Maybe most of the values in the feature are the same, or even the values of the whole feature are the same, then this feature has no effect on sample differentiation.

No matter what the next feature engineering needs to do, the feature with variance of 0 should be eliminated first. 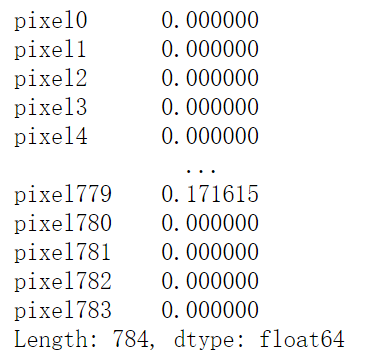 It can be seen that we have deleted the feature with variance of 0, but there are still more than 708 features left. It is obvious that further feature selection is needed. However, if we know how many features we need, variance can also help us make feature selection in one step. For example, if we want to leave half of the features, we can set a variance threshold to halve the total number of features. As long as we find the median of the feature variance and enter this median as the value of the parameter threshold:

When the feature is a binary classification, the value of the feature is Bernoulli random variable, and the variance of these variables can be calculated as:

Where X is the feature matrix and p is the probability of a class of binary classification features in this feature.

1.1.2 influence of variance filtering on the model

KNN is a classification algorithm in K-nearest neighbor algorithm. Its principle is very simple. It uses the distance between each sample and other sample points to judge the similarity of each sample point, and then classifies the samples. KNN must traverse each feature and each sample, so the more features, the slower the calculation of KNN.

It can be seen that for KNN, the effect of filtering is very obvious: the accuracy is slightly improved, but the average running time is reduced by 10 minutes, and the efficiency of the algorithm after feature selection is increased by 1 / 3.

>Nearest neighbor algorithm KNN, single decision tree, support vector machine, SVM, neural network and regression algorithm all need to traverse features or raise dimensions for operation, so they have a large amount of operation and take a long time. Therefore, feature selection such as variance filtering is particularly important for them.
>For algorithms that do not need to traverse features, such as random forest, it randomly selects features for branching, and the operation itself is very fast, so the effect of feature selection is mediocre for it.

For the affected algorithms, the impact of variance filtering can be summarized as follows:

The random forest can also be adjusted n_estimators parameters to improve the accuracy of the model, random forest is a very powerful model

How do we know whether the noise filtered by variance is an effective feature? Will the filtered model get better or worse?

Each data set is different, so you can only try it yourself.
You can draw a learning curve to find the best point of the model. But in reality, we often don't do this, because it will take a lot of time.
Usually, we only use variance filtering with a threshold of 0 or a small threshold to eliminate some features that are obviously unavailable, and then we will choose a better feature selection method to continue to reduce the number of features