Log, hog and dog differential operators are effective in detecting near circular spots

Although using LoG can better detect the feature points in the image, it has too much computation. Usually, DoG (difference of Gaussian) can be used to approximate the LoG

The full name of sift is Scale Invariant Feature Transform (people can recognize how an object rotates). SIFT feature is a very stable local feature, which maintains invariance to rotation, scale scaling, brightness change and so on.

There are four main steps 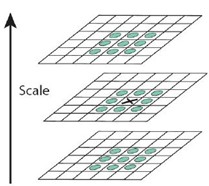 Each key point has three information: location, scale and direction. Thus, a SIFT feature region can be determined.

Gaussian function is the only feasible scale space kernel

Although using LoG can better detect the feature points in the image, it has too much computation. Usually, DoG (difference of Gaussian) can be used to approximate the LoG.

LOG can be regarded as an approximation of LOG, but it is more efficient than LOG. Let k be the scale factor of two adjacent Gaussian scale spaces, then the definition of DoG:

L(x,y, σ) Is the Gaussian scale space of the image The response image of DoG is obtained by subtracting the images of two adjacent Gaussian spaces

< font color = Red > Harris corner detection is a first derivative matrix detection method based on image gray. The main idea of the detector is local self similarity / autocorrelation, that is, the similarity between the image block in a local window and the image block in the window after small movement in all directions</ font>

1. The corner can be the corner of two edges;