In the previous blog, we have a certain understanding of the use of Flink batch streaming API. Interested students can refer to the following:

In the previous tutorial, we have learned the Time in Flink's four cornerstones. As shown in the figure below, this article explains the State: 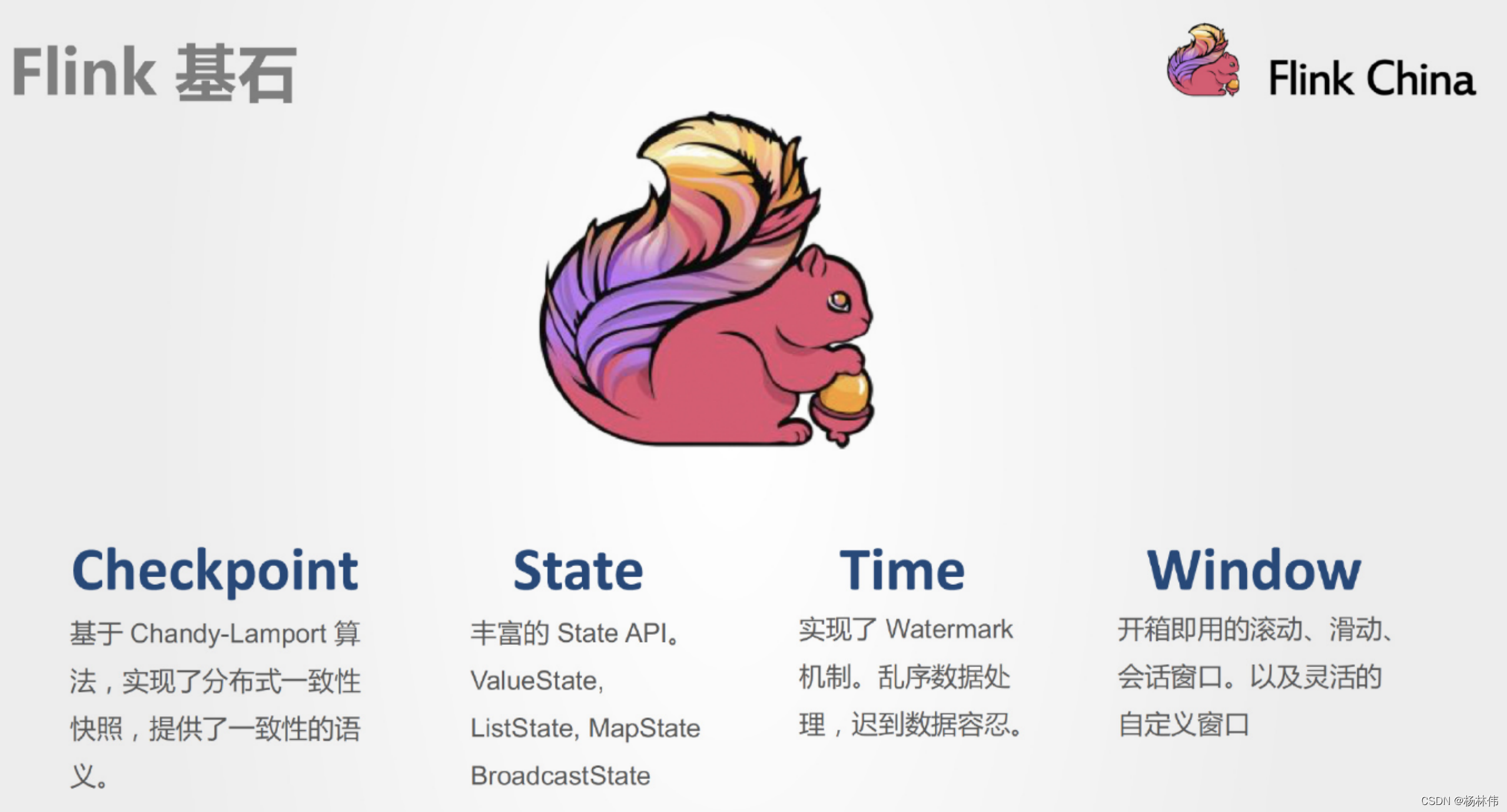 The API for stateful computing has been encapsulated in Flink, and the underlying state has been maintained!

Execute netcat, and then enter hello world at the terminal. What will the execution program output?

So the question is, if you input hello world on the terminal again, what will the program input?

How to count how many pieces of data each consumer lags behind in real time, as shown in the figure, an example of input and output is given. We can know that the input time point has a timestamp, the producer writes the message to the location of a certain time point, and what location each consumer reads at the same time point. Just now, it was mentioned that the producer wrote 15 entries and the consumer read 10, 7 and 12 entries respectively. So the question is, how to convert the progress of producers and consumers into the schematic information on the right?

consumer 0 lags behind by 5, consumer 1 lags behind by 8, and consumer 2 lags behind by 3. According to the principle of Flink, map operation is required here. Map first reads in the messages and then subtracts them respectively to know how many items each consumer is behind. If you send the map all the way down, you will get the final result.

The difference is that the incoming data of the two / api/a Nginx logs are the same, but the output results may be different. The first output count=1 and the second output count=2, indicating that the same input may get different outputs.

The output result depends on how many times the API address of the current request has been accessed before. The cumulative number of visits from the first one is 0, and count = 1. The second one has been accessed once, so the cumulative number of visits from / api/a is count=2. In fact, a single piece of data only contains the information of the current visit, not all the information.

To get this result, you also need to rely on the cumulative access volume of the API, that is, the status.

This calculation mode is to input data into the operator for various complex calculations and output data. In this process, the operator will access the state previously stored in it. On the other hand, it will also update the impact of the current data on the state in real time. If 200 pieces of data are input, the final output is 200 results.

From the perspective of whether Flink takes over or not, it can be divided into:

The differences between the two are as follows:

In actual production, only ManagedState is recommended. 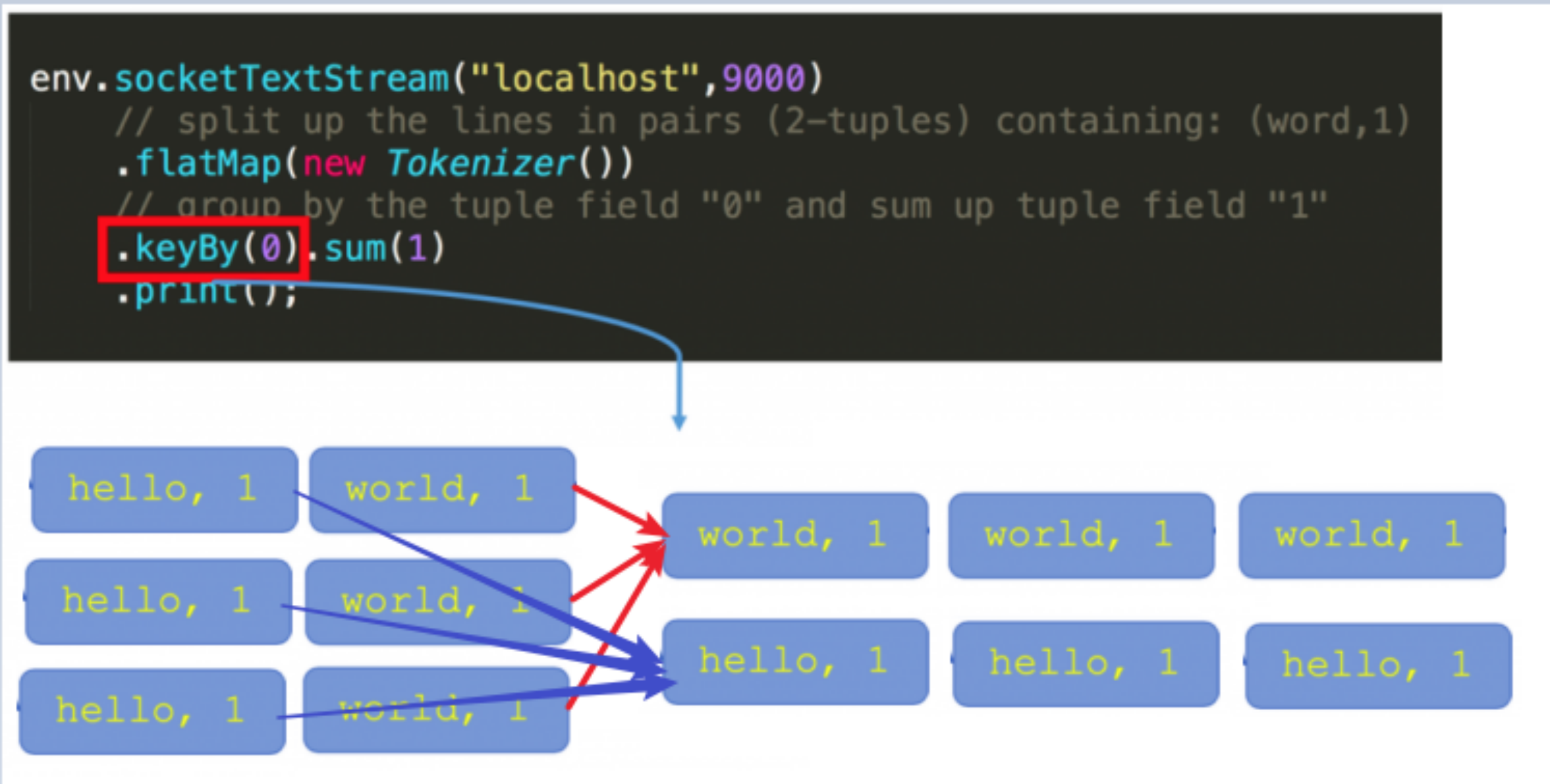 In Flink Stream model, Datastream can be changed into KeyedStream after keyBy operation.

Keyed State is based on the state on KeyedStream. This state is bound to a specific key. Each key on the KeyedStream stream corresponds to a state, such as stream keyBy(…)

The State after KeyBy can be understood as a partitioned State. Each key of each instance of each parallel keyed Operator has a Keyed State, that is, < parallel operator instance, key > is a unique State. Since each key belongs to a parallel instance of a keyed Operator, we simply understand it as < operator, key >.

fromElements here will call the class of FromElementsFunction, in which operator state of type list state is used

Operator State can be used for all operators, but it is generally used for Source.

As mentioned earlier, stateful computing actually needs to consider historical data, and historical data needs to be stored in a place. Flink provides the following API / data structure to store states in order to facilitate the storage and management of different categories of State s!

The Keyed State is accessed through the RuntimeContext, which requires the Operator to be a rich function.

Save the data structure of Keyed state:

For example, the FlinkKafkaConsumer in Flink uses operator state, which saves all (partition, offset) mappings of the consumed topic in each connector instance. 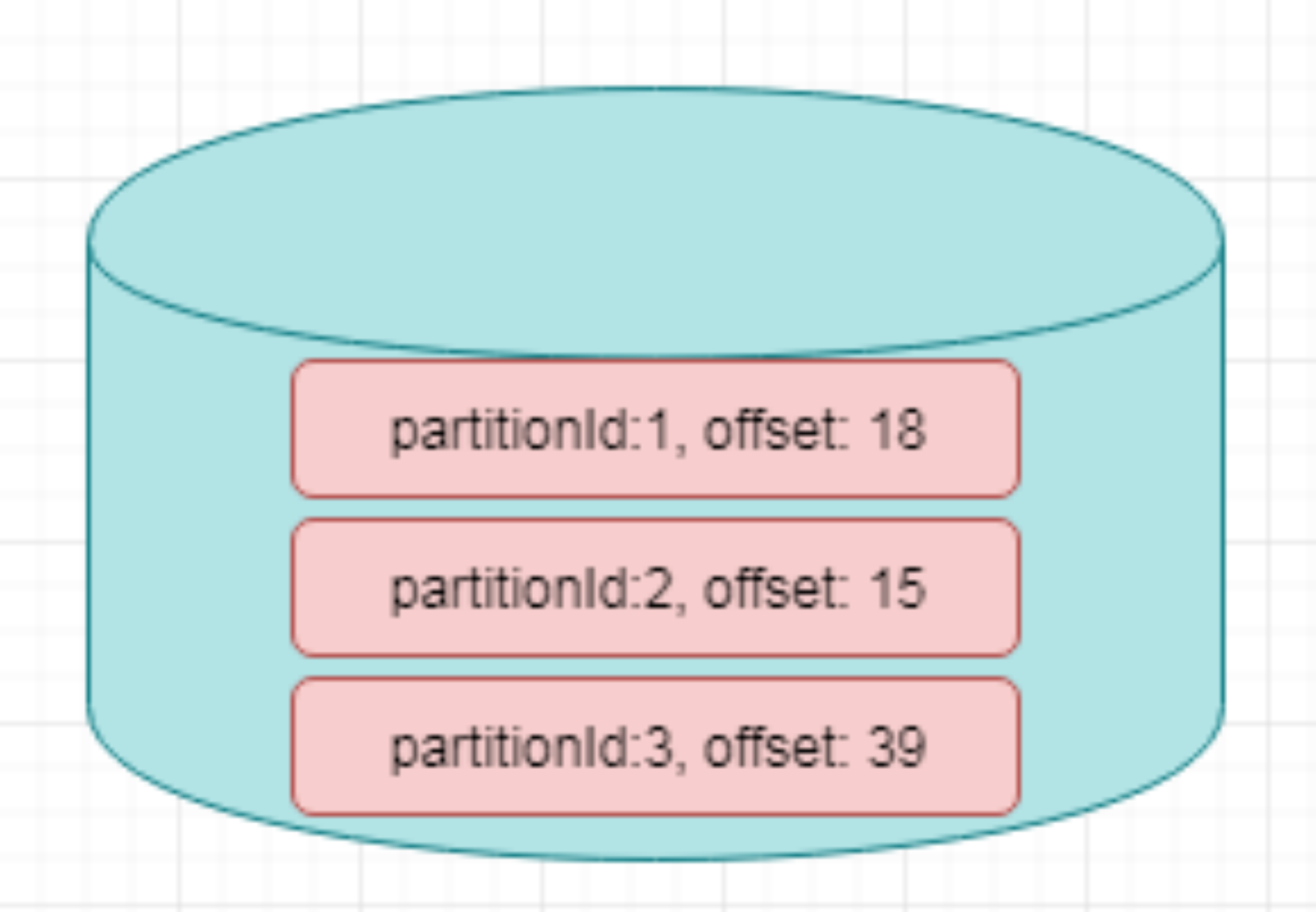 The following figure illustrates how to use keyed state in the code by taking the StreamGroupedReduce class used by sum of word count as an example: 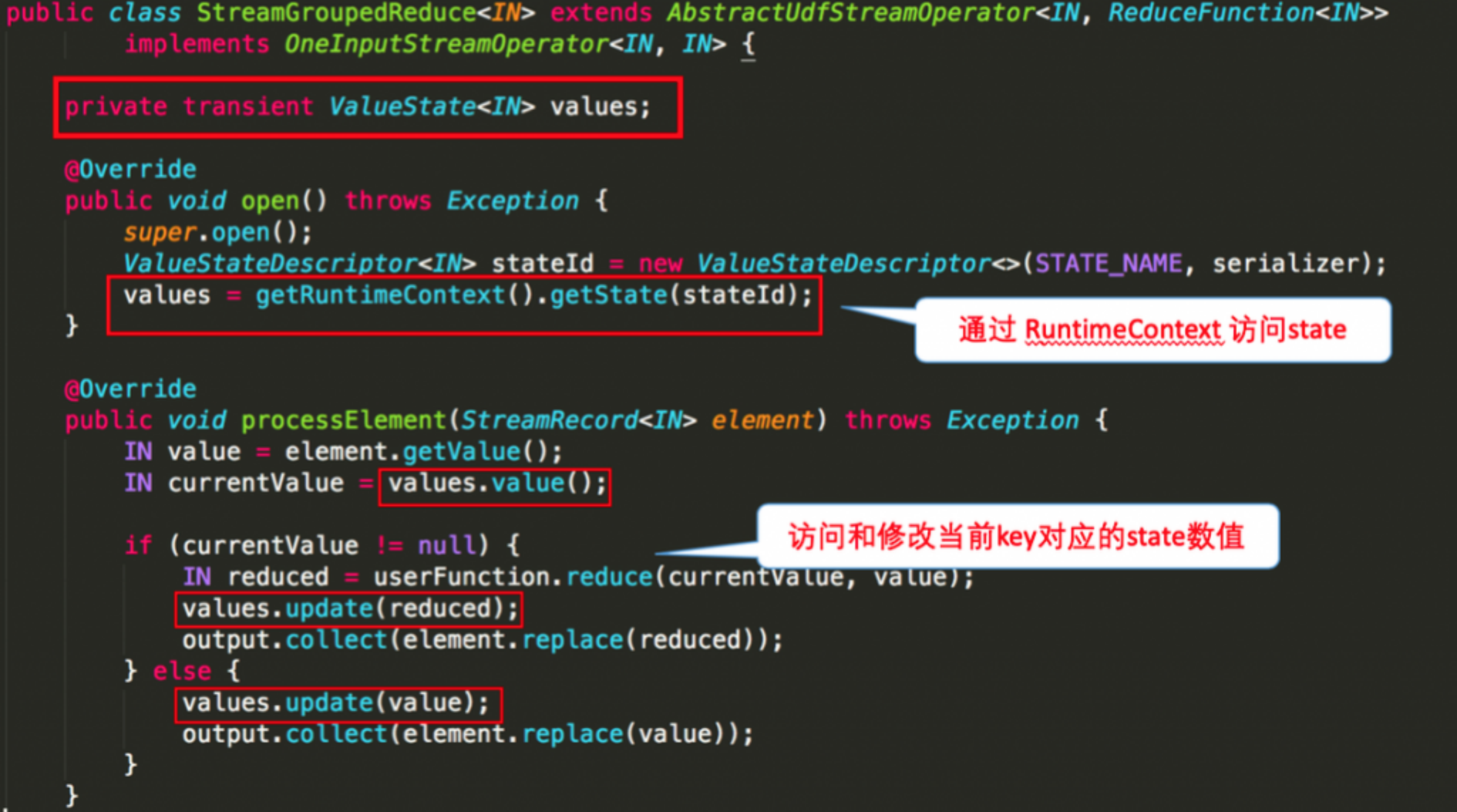 Requirement: use the ValueState in the KeyState to obtain the maximum value in the data (in practice, you can directly use maxBy)

The following figure explains the FromElementsFunction class in the word count example in detail and shares how to use operator state in the code: 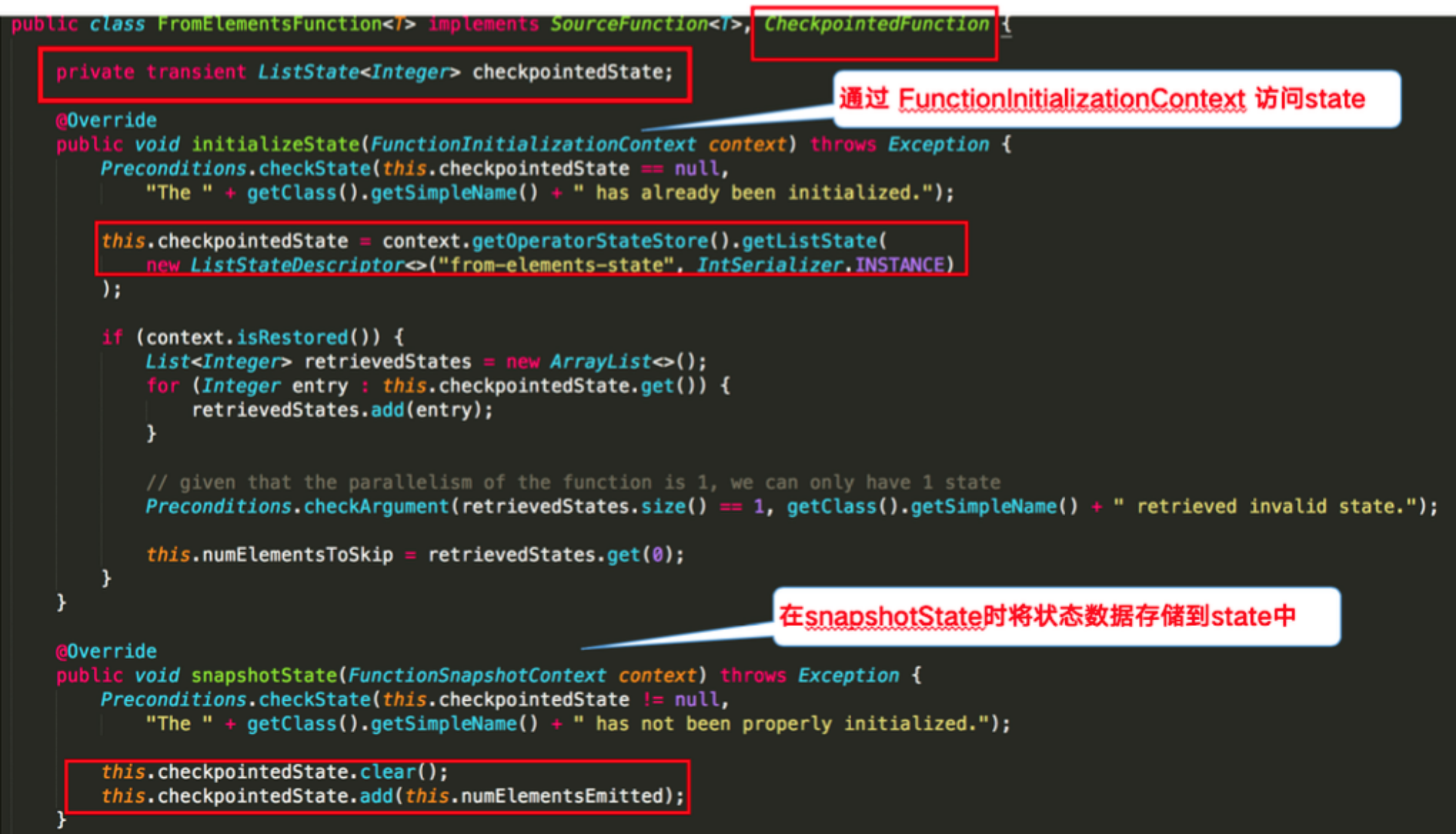 This article mainly explains the state management in Flink advanced API. Thank you for reading. The end of this article!