--The oneline tag compresses each commit into one line. By default, a commit ID and the first line of the commit description are displayed. The output is as follows:

Many times, it is very useful to know which branch or tag the commit is associated with. The -- modify tag will make git log display the reference of each commit (such as branch, tag, etc.)

It can be used in combination with other config options. For example, GIT log -- oneline -- modify output is as follows:

git log has many options to show the differences of each commit. The two most commonly used are -- stat and - p

--stat displays the number of added lines and deleted lines of each file in each commit. This is very useful for us to understand the general changes of a commit. The following commit hello.py adds 67 lines and deletes 38 lines:

If you want to see what specific changes have been made to each commit, you can use git log -p, and the results are as follows:

git shortlog is a special version of git log. Its purpose is to create a published notification. Commit is grouped according to the author and the first line description of each commit is displayed. Through it, you can easily see who has done what

For example, two developers have contributed five commitments to a project. The output of GIT shortlog is as follows:

By default, git shortlog is sorted by author's name. You can use - n to sort by the number of commit s of each author

--The graph tag will draw an ASCII diagram to show the branch structure of the commit history. It is usually used in combination with -- oneline --decorate:

The asterisk tells you which branch the commit is in. The above output tells us that 23ad9ad and 16b36c6 are in one subject branch and the others are in the master branch

The output is as follows:

You can use - n to limit the number of outputs. The following example shows only the last three commit s

You can use -- after or -- before to filter by date. The following example only shows the commit after July 1, 2014 (including July 1)

You can also use a relative time, such as "1 week ago" and "yesterday"“

Note that -- since --until and -- after --before mean the same thing

Show the commit ment of John's contribution. The author name doesn't need to match exactly -- just include it

You can also use regular expressions. The following command searches for the commit ment contributed by Mary and John

Note that this -- author contains not only the name but also email, so you can use this to search email

For example, if your team adds the relevant issue number to each commit description, you can use the following command to find the commit related to an issue:

You can also pass - i to ignore case

Here -- is to tell Git that the following parameters are the file path rather than the name of the branch. If the following file path will not be confused with a branch, you can omit --

Sometimes you want to search for a commit related to adding or deleting a line of code. You can use - s "< string >". The following example assumes that you want to know when Hello, World! Was added to the project, you can use the following command:

If you want to use regular expressions instead of strings, you can use - G instead of - S

This is a very useful debug tool. With it, you can locate all commit s related to a line of code. You can even see when a line is copied and moved to another file

You can view the commit of a range:

This command is very useful. When you use branch as the range parameter, it can easily display the differences between the two branches. Take a look at the following command: 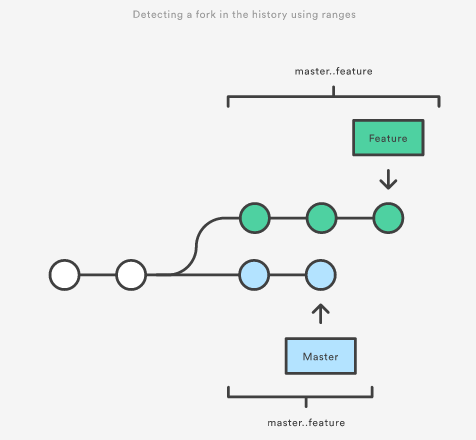 feature..master contains all commit s that the master has but the feature does not

By default, git log will output merge commit   You can filter out the merge commit through the -- no merges tag:

If you are only interested in merge commit, you can use -- merges: