Serial GC is the most classic and oldest garbage collector, opened with -XX:+UseSerialGC. Its Java heap conforms to the Weak Generational Hypothesis. The implication of the weak generation hypothesis is that most objects die young, and it has been validated in a variety of programming paradigms or programming languages. In contrast, the strong generation hypothesis implies that older objects are less likely to die, but there is little evidence to support it. It has been noted that most objects have very short life cycles, which is cognizant because allocating local variables is almost the most common operation in a method, and many of these objects are discarded afterwards.

Memory sets imply that the GC has the ability to discover each write object operation. Whenever an object write operation occurs, the GC checks whether the written object is in a different generation and decides whether to put it in the memory set. The components that give the GC the ability to "discover all write object operations" are the GC barriers, specifically in the context. Writing objects is part of the code execution system and is accomplished by the GC barrier in conjunction with the JIT compiler and template interpreter.

Card Table is a coarse-grained memory set that can store cross-generation references. Instead of accurately recording objects and references pointing to the new generation in the older generation, it divides the older generation into two power-sized memory pages, recording the pages in which they are located. Mapping these pages using a card table reduces the memory overhead of the memory set itself, while avoiding the traversal of the entire older generation. A standard card table implementation is usually a bitmap with one memory page for each bit. As shown in Figure 10-2. 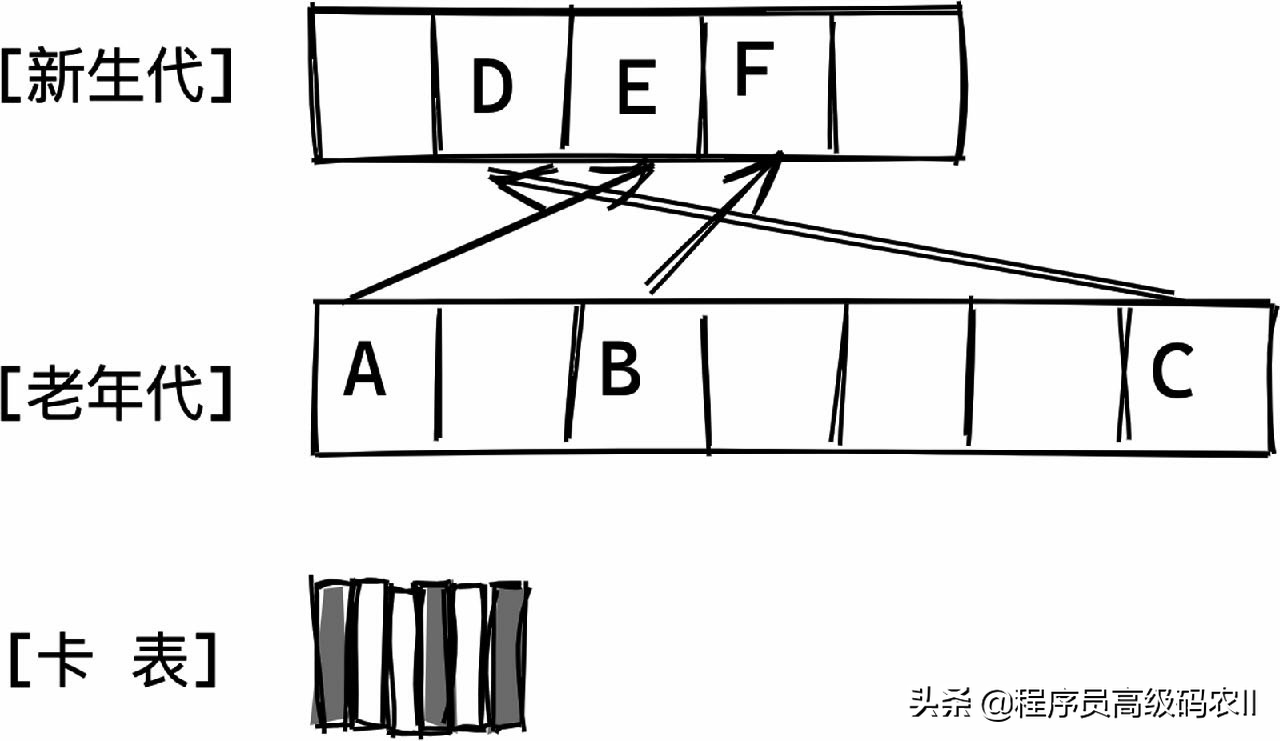 When the Mutator thread performs a class member variable assignment operation, the virtual opportunity checks whether an older generation object or reference is assigned to a new generation member, and if so, marks the bits in the card table corresponding to the memory page in which the member variable resides. Subsequently, only the memory pages corresponding to the bits marked in the card table need to be traversed, instead of the entire older generation.

However, bitmaps can be quite slow, because when one of the bit tags in a bitmap is read, updated, and written back, several instructions are required to perform a bit operation on the RISC processor. An effective performance improvement is to use byte arrays instead of bitmaps, which use eight times as much memory as bitmaps, but still account for less than 1% of the heap. The card table for HotSpot VM is implemented by CardTable, which uses a byte array instead of a bitmap, CardTable::byte_ The for function is responsible for mapping the memory address to the card table byte array, as shown in code lists 10-7:

Where card_shift is 9. It is not difficult to see from the implementation that the virtual machine defines a memory page as 512 bytes, which is byte_whenever there is a cross-generation reference to a memory page Map_ The item corresponding to the base array is marked dirty.

YGC uses a replication algorithm to clean up new generation space. A common scenario for YGC is that small objects are initially allocated in Eden space, when YGC occurs when Eden space is insufficient, the living objects in Eden space and From space are marked, and then the virtual machine transfers the living objects in both spaces to ToSpace, or to older generations if ToSpace cannot accommodate objects. If the To space can accommodate objects, the Eden and From spaces are empty, the From space and the To space exchange roles, then there is an empty Eden space, the From space of some surviving objects, and the empty To space. Repeat these steps the next time YGC occurs.

When some objects are still alive after many YGCs, it can be thought that they have a long life cycle and do not belong to the objects that are dying or dying. Therefore, the GC will promote the objects from the new generation to the old generation. In addition to the general situations mentioned above, there are special circumstances to consider, such as the inability of Eden space to accommodate large objects at first, and the inability of older generations to accommodate promoted objects. The implementation of the full YGC logic is shown in code lists 10-8, which also includes special emptying:

Before YGC is made, check that the garbage collection is safe (collection_attempt_is_safe). The so-called safety is to determine whether the older generation can safely accommodate the new generation in the worst case when it is all the living objects that need promotion. If you can continue to do YGC.

young_process_roots() scans all types of GC Root s and scans the card table memory set To find references from older generations To newer generations, then copies them To the ToSpace using a fast scan closure. FastScanClosure, a fast scan closure, abstracts an operation on an object (threads, objects, klass, and so on) into a closure operation, which is then passed To the logical code that handles continuous objects. Since the C++ 98 language standard used by HotSpot VM does not have a lambda expression, only classes can be used To simulate closures [1]. The FastScanClosure closure is shown in code listings 10-9:

Starting with GC Root and the old age, all objects that can be reached are living objects, and FastScanClosure is applied to each living object. If you encounter an object that already has a forwarding pointer set, that is, it has been copied, return the copied object directly, otherwise use copy_as shown in code lists 10-10 To_ Survivor_ Space for replication:

copy_to_survivor_space() Copies an object to To space or promotes it to an older generation, as appropriate, and then sets a new object address for the old object to forward the pointer (Forwarding Pointer). The meaning of setting forward pointer is that there may be two slots pointing to the same object in GC Root. If you simply move the object and change the slot to a new object address, the second GC Root slot will access the wrong old object address. After setting forward pointer, subsequent access to the old object will be forwarded to the correct new object.

The above process touches the GC Root and older directly reachable objects and moves them To the ToSpace (or promotes the older generation), which may contain reference fields and may indirectly reach other objects. Serial GC maintains a save_mark pointer and top pointer of allocated space, bottom of To space To save_ Objects in the mark's area represent objects that have been scanned by themselves and their fields, save_ Objects in the area marking To the top of the space represent objects whose scans are complete but whose fields are incomplete.

The task of FastEvacuateFollowersClosure is to scan save_mark objects to the top of space, traverse their fields, and move those reachable objects to the bottom of space to save_mark's region, then move forward save_mark until save_mark equals the top of the space, and the scan is complete.

The tag collation algorithm used by FGC is based on the Lisp2 algorithm proposed by Donald E. Knuth: Mark the surviving objects first, then move all the surviving objects to one end of space. FGC starts with TenuredGeneration::collect, which records logs before and after GC and can be output using -Xlog:gc*, as shown in code listing 10-11:

The log shows that the FGC process is divided into four phases, as shown in Fig. 10-5.

The first phase of the virtual machine traverses all types of GC Roots and then uses XX::oops_do(root_closure) marks all living objects from this GC Root. XX denotes the GC Root type, root_ A closure represents a closure that marks a living object. Root_ The closure, MarkSweep::FollowRootClosure closure, gives it an object to mark the object, members of the iteratively marked object, and all objects and their members of the stack on which the marked object resides, as shown in code lists 10-12:

As mentioned in section 10.1.2, World Stop (STW) is the phenomenon where all Mutator threads pause. Both YGC and FGC of Serial GC use single threads, so all Mutator threads must be paused while GC is working. The larger the Java heap, the more obvious the STW is. Long STWs are not acceptable for GUI programs or other programs that require pseudo-real-time, fast response. So STW is one of the most criticized places in garbage collection technology: on the one hand, it takes time for all Mutator threads to reach a safe point, on the other hand, it also takes a lot of time for garbage collection itself after STW. So can we use modern processor multicores to parallelize some of the work in garbage collection after STW? Parallel GC gives a satisfactory answer to this question.