Select a suitable place and create an empty directory

You can see that a hidden folder will be created in the current directory git
It's easy not to touch any files in it, because this directory is used by Git to track and manage the version library. If you break it, the Git warehouse will be destroyed.

The. Git directory is the Git version library

There are many things stored in Git's version library, the most important of which is the temporary storage area called stage (or index), the first branch that git automatically creates for us, master (usually called the main branch), and a pointer to the master called HEAD.

Relationship between the three
The original file is in the workspace 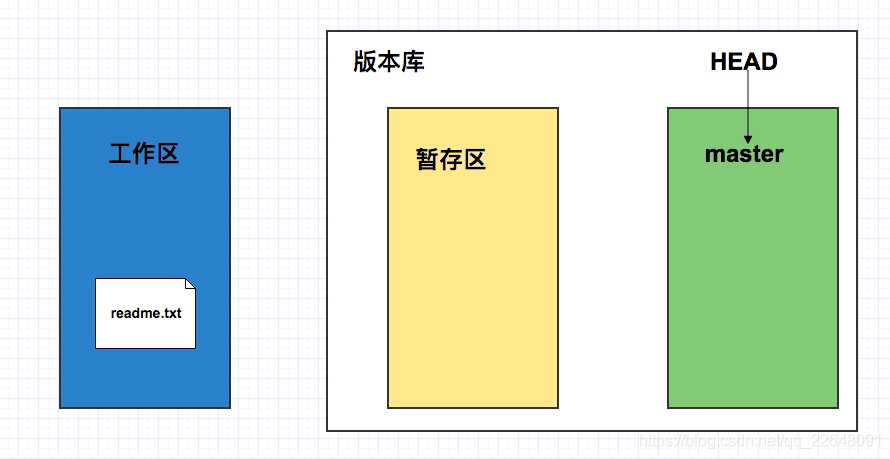 After git commit -m "new file readme.txt", all files and directories in the staging area will be submitted (moved) to the branch master.

You can add multiple times and submit once.

The version to which HEAD refers is the current version; When you switch versions back and forth, Git just points the HEAD to the version you want to switch, and updates the files in the workspace, as shown in the figure below:

The pointer after the latest submission points to:

The pointer after version fallback points to

In version fallback, you already know that Git strings them into a timeline for each submission, which is a branch. So far, there is only one timeline. In Git, this branch is called the main branch, that is, the master branch. Strictly speaking, HEAD does not point to submission, but to master, which points to submission. Therefore, HEAD points to the current branch.

When we create a new branch, such as bac, Git will create a new pointer called bac, pointing to the same submission point of the master, and then point the HEAD to bac, indicating that the current branch is on bac:

Git creates a branch very quickly, because at this time, just add a bac pointer and change the direction of HEAD. There is no change in the files in the workspace!
From now on, the modification and submission of the workspace is for the bac branch. For example, after a new submission, the bac pointer moves forward one step, while the master pointer remains unchanged, and the HEAD pointer remains the same:

If our work on bac is completed, we can merge bac into master. How does Git merge? Very simply, first switch to the master branch, where the HEAD pointer will point to the master pointer, and then directly point the master to the current submission point of bac to complete the merger:

In actual development, we should carry out branch management according to several basic principles:

First, the master branch should be very stable, that is, it is only used to release new versions and cannot work on it at ordinary times;

Although Git's label is a snapshot of the version library, it is actually a pointer to a commit (much like a branch, right? But the branch can move, but the label cannot move). Therefore, the creation and deletion of labels are completed in an instant.

Note: labels are not listed in chronological order, but in alphabetical order