Hello, I'm jiandarui. This article mainly analyzes Vue3 diff algorithm. Through this article, you can know:

If you don't particularly understand the patch process of Vnode and renderer, it is recommended to read the following two articles first:

Marked as unlocked in processing_ Fragment.

The omitted code is pasted here.

Because whether it is to directly patch the public part or the newly added node, mountChildren (actually traversing child nodes and performing patch operations) is actually a recursive patch, which will affect the performance.

When diff has a key subsequence, it will be subdivided. It will be judged by one of the following situations:

At the beginning, Mr. Hui made three corrections, namely: 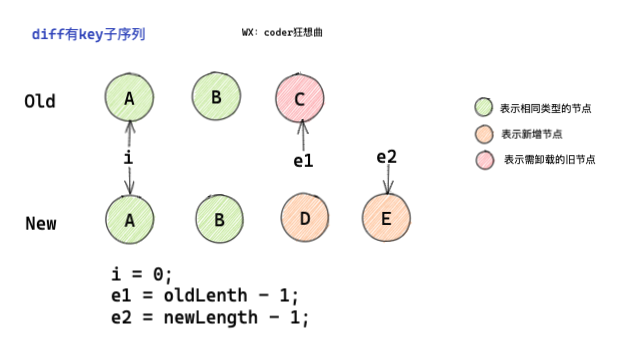 2.1 the starting position node type is the same

Part of the code is omitted above, but it does not affect the main logic.

It can be seen from the code that during traversal, the three pointers previously declared in the global context of the function are used for traversal judgment.

Once you encounter nodes of different types, you will jump out of diff traversal.

2.2 the end position node type is the same

The start position is the same, and the end of diff will be followed by traversing diff from the end of the sequence.

At this time, the tail pointers e1 and e2 need to be decremented.

It can be seen from the code that diff logic is basically the same as the first one, and the same type is used for patch processing.

Different types of break, jump out of loop traversal.

And decrement the tail pointer.

2.3 after traversing the same part, there are new nodes in the new sequence for mounting

After the processing of the above two cases, the nodes with the same part at the beginning and end have been patched. The next step is to patch the new nodes in the new sequence.

In this case, it means that there are new nodes in the new child node sequence.

The new node will be patch ed.

As can be seen from the above code, the first parameter is not passed during patch, and the mount logic will eventually be used.

During the process of patch, the i pointer is incremented.

And get the anchor point through nextPos.

2.4 after traversing the same part, unload the new sequence with fewer nodes

If I > E2 & & I < = E1 occurs after processing the same ending nodes, it means that there are old nodes that need to be unloaded.

You can know from the code that in this case, the i pointer will be incremented to unload the old node.

In this case, it is more complicated, but the core logic of diff is to build a maximum increasing subsequence through the position change of old and new nodes. The maximum subsequence can ensure the reuse of nodes through the minimum movement or patch.

Let's take a look at how to implement it.

Combined with the above figure and code, you can know:

2.5.2 traverse the old subsequence from left to right, patch the matching nodes of the same type, and remove the nonexistent nodes

After the previous processing, the keyToNewIndexMap has been created.

Before starting the left to right traversal, you need to know the meaning of several variables:

After knowing the meaning of these variables, we can start traversing the subsequence from left to right.

When traversing, you need to traverse the old subsequence first, starting from s1 and ending at e1.

patched will be accumulated during traversal.

If patched > = tobepatched, the number of child nodes in the new subsequence is less than that in the old subsequence.

The old child node needs to be unloaded.

If prevChild The key exists, and the subscript newIndex of prevChild in the new subsequence will be obtained through the keyToNewIndexMap we built earlier.

Taking the figure as an example, it can be seen that in the traversal process, nodes c, d and e are reusable nodes, corresponding to the positions of 2, 3 and 4 in the new sub sequence respectively.

Therefore, the values newIndex can get are 4, 3 and 2.

What if the old node does not have a key?

If the node does not have a key, it will also take the new sub sequence, traverse and find two sub nodes with the same old and new types without a key, and take the subscript of this node as the newIndex.

Newindextooldindexmap [J - S2] = = 0 indicates that the node does not have a key.

If newIndex has not been obtained, it indicates that there is no child node in the new subsequence that is the same as prevChild, and prevChild needs to be unloaded.

Otherwise, start to build a keyToNewIndexMap according to the newIndex to specify the subscript position corresponding to the old and new nodes.

Keep in mind that newIndex is obtained from the old node and its subscript in the new subsequence.

While building the newIndexToOldIndexMap, it will determine whether the node moves by judging the relationship between newIndex and maxNewIndexSoFa.

The last traversal end of newIndexToOldIndexMap should be [5, 4, 3, 0]. 0 indicates that there is no corresponding node in the old sequence and the node may be a new node.

If the relative position of the old and new nodes in the sequence remains unchanged, maxNewIndexSoFar will increase with the increase of newIndex.

This means that the nodes do not cross. There is no need to move reusable nodes.

At the end of traversal, the old and new nodes will be patched, and the patched will be accumulated to record how many nodes have been processed.

After the above processing, the old nodes have been unloaded and the child nodes whose relative positions remain unchanged have been patch reused.

The next step is to move the reusable nodes and mount the new nodes in the new subsequence.

This involves a core piece of code, which is also the key to improving Vue3 diff efficiency.

The subscript mapping before and after the change of new and old child nodes is recorded through newIndexToOldIndexMap.

Here, we will get a maximum increasing subsequence through the getSequence method. Used to record the subscript of the child node whose relative position has not changed.

According to this incremental sub sequence, when moving reusable nodes, only the sub nodes whose relative position changes before and after can be moved.

What is the largest increasing subsequence?

Taking the above figure as an example, among the unprocessed out of order nodes, there are new nodes N and I, node G to be unloaded, and reusable nodes C, D, E and F.

Next, let's look at the code:

You can know from the above code:

So far, we have completed the learning analysis of Vue3 diff algorithm.

Here is an example for you to practice in combination with the analysis process of this article:

You can only look at the first picture for analysis. After the analysis, you can compare it with the second and third pictures. 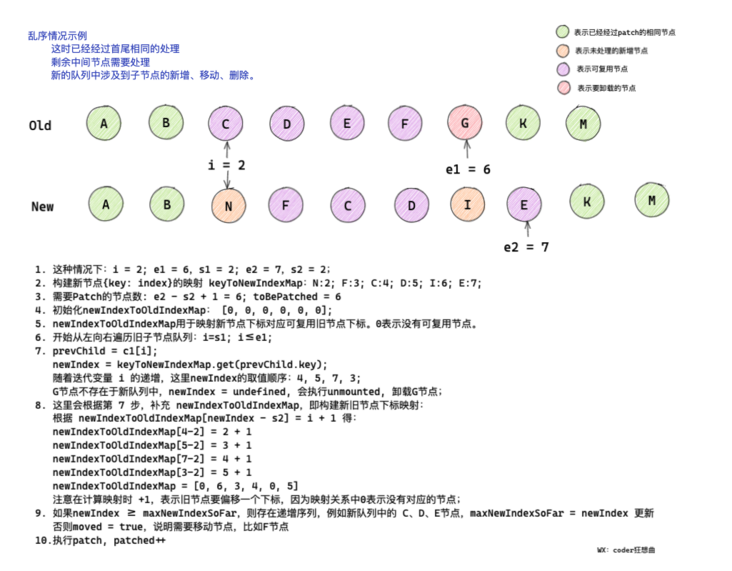 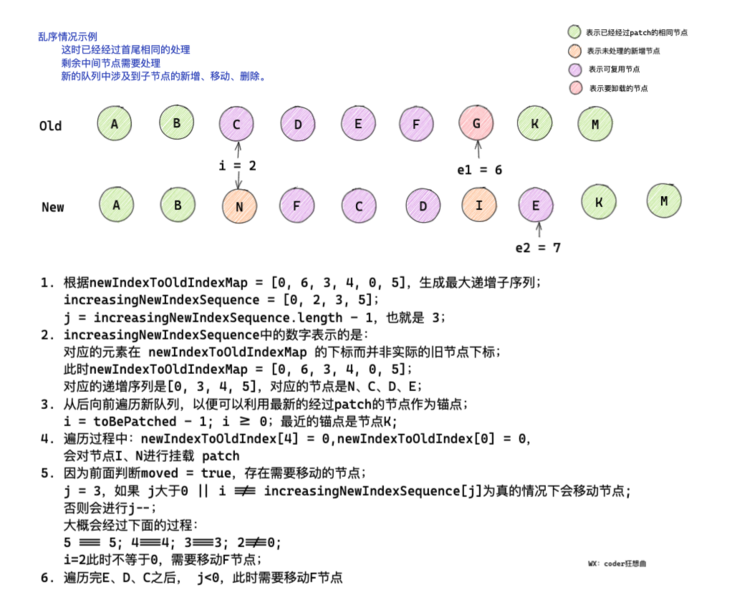 Through the above learning analysis, we can know that Vue3's diff algorithm will first finish the patch processing of the same node. After that, it will mount the new node and unload the old node.