An important internal interface is used in the above program: Map.Entry. Each Map.Entry is actually a key value pair. As can be seen from the above program, when the system decides to store the key value pair in HashMap, it does not consider the value in the entry at all, but only calculates and determines the storage location of each entry according to the key. This also explains the previous conclusion: we can take the value in the Map set as an attachment to the key. After the system determines the storage location of the key, the value can be saved there. After my transformation of the HashMap program, I deliberately constructed the hash conflict phenomenon, because the initial size of the HashMap is 16, but I put more than 16 elements in the HashMap, And I blocked its resize() method. Don't let it expand. At this time, the underlying array entry [] of HashMap     The table structure is as follows:

When there is no hash conflict in the hashmap and a single linked list is not formed, the hashmap searches for elements quickly and the get() method can directly locate the elements. However, after the single linked list appears, an Entry chain is stored in a single bucket instead of an Entry. The system can only traverse each Entry in order, Until the Entry to be searched is found - if the Entry to be searched is located at the end of the Entry chain (the Entry is first placed in the bucket), the system must cycle to the end to find the element.

When creating a HashMap, there is a default load factor, with a default value of 0.75, which is a compromise between time and space costs: increasing the load factor can reduce the memory space occupied by the Hash table (that is, the Entry array), but it will increase the time cost of querying data, and queries are the most frequent operations (get() and put() of HashMap) Methods all use query); Reducing the load factor will improve the performance of data query, but it will increase the memory space occupied by Hash table.

HashMap is based on hash table   Map   Interface implementation. This implementation provides all optional mapping operations and allows the use of   null   Value sum   null   Key. (except out of sync and allowed)   null   In addition, HashMap   Class and   Hashtable   Roughly the same.) this class does not guarantee the order of mapping, especially it does not guarantee that the order is constant.

The bottom layer of HashMap is mainly based on arrays and linked lists. The reason why it has a very fast query speed is that it determines the storage location by calculating the hash code. HashMap mainly calculates the hash value through the hashCode of the key. As long as the hashcodes are the same, the calculated hash value is the same. If there are many stored objects, the hash values calculated by different objects may be the same, which leads to the so-called hash conflict. Students who have studied data structures know that there are many ways to solve hash conflicts. The bottom layer of HashMap solves hash conflicts through linked lists. 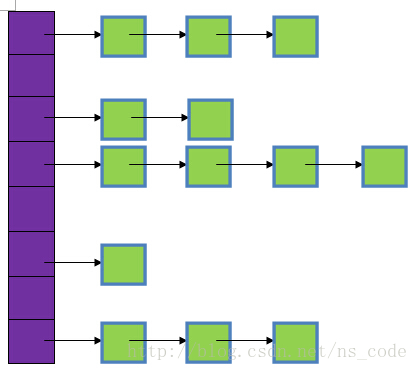 Let's look at the code of the Entry class in HashMap:

HashMap is actually an Entry array. The Entry object contains keys and values. next is also an Entry object, which is used to handle hash conflicts and form a linked list.

Let's take a look at some key attributes in the HashMap class:

If: the larger the loading factor is, the more elements will be filled. The advantage is that the space utilization is high, but the chance of conflict is increased. The length of the linked list will be longer and longer, and the search efficiency will be reduced.

On the contrary, the smaller the loading factor is, the fewer elements will be filled. The advantage is that the chance of conflict is reduced, but the space is wasted. The data in the table will be too sparse (many spaces begin to expand before they are used)

The greater the chance of conflict, the higher the cost of finding

Here are some construction methods of HashMap:

The above program uses an important internal interface: map. Entry, each   Map.Entry   It's actually a   key-value   yes. As can be seen from the above program, when the system decides to store   HashMap   Medium   key-value   Right time, no consideration at all   Entry   Medium   Value, just based on   key   To calculate and determine each   Entry   Storage location for. This also shows the previous conclusion: we can put   Map   In the collection   value   regard as   key   When the system decides   key   After the storage location of, value   Then save it there.

Let's analyze this function slowly. Lines 2 and 3 are used to handle the case where the key value is null. Let's look at the putForNullKey(value) method:

Note: if the key is null, the hash value is 0, and the object is stored at the position with index 0 in the array. table[0]

Let's go back to line 4 of the put method. It calculates the hash code through the hashCode value of the key. The following is the function for calculating the hash code:

After the hash code is obtained, the index that should be stored in the array will be calculated through the hash code. The function of calculating the index is as follows:

Let's focus on this. Generally, we naturally think of using hash value to modulo length (i.e. division hash method) for hash table hashing. This method is also implemented in Hashtable. This method can basically ensure that the hash of elements in the hash table is relatively uniform, but the modulo will use division operation, which is very inefficient. In HashMap, h& (length-1) method is used to replace modulo, Uniform hashing is also realized, but the efficiency is much higher. This is also an improvement of Hashtable by HashMap.

Next, we analyze why the capacity of the hash table must be an integer power of 2. First, if the length is an integer power of 2, h& (length-1) is equivalent to taking the module of length, which ensures the uniformity of hash and improves the efficiency; Secondly, if length is an integer power of 2, it is an even number, so that length-1 is an odd number and the last bit of the odd number is 1, which ensures that the last bit of H & (length-1) may be 0 or 1 (depending on the value of H), that is, the result after and may be even or odd, so as to ensure the uniformity of hash. If length is an odd number, Obviously, length-1 is an even number, and its last bit is 0. In this way, the last bit of h& (length-1) must be 0, that is, it can only be an even number. In this way, any hash value will only be hashed to the even subscript position of the array, which wastes nearly half of the space. Therefore, length takes an integer power of 2 to reduce the probability of collision between different hash values, This allows elements to be hashed evenly in the hash table.

This seems very simple, but actually it has a mystery. Let's take an example to illustrate:

Assuming that the array lengths are 15 and 16 respectively, and the optimized hash codes are 8 and 9 respectively, the results of & operation are as follows:

Therefore, when the array length is the nth power of 2, the probability that different key s calculate the same index is small, so the data is evenly distributed on the array, that is, the probability of collision is small. In contrast, you don't have to traverse the linked list at a certain location during query, so the query efficiency is higher.

According to the source code of the put method above, when the program tries to put a key value pair into the HashMap, the program first determines the storage location of the Entry according to the hashCode() return value of the key: if the hashCode() return values of the keys of the two entries are the same, their storage locations are the same. If the keys of these two entries return true through equals comparison, the value of the newly added Entry will overwrite the value of the original Entry in the collection, but the key will not overwrite it. If the keys of these two entries return false through the equals comparison, the newly added Entry will form an Entry chain with the original Entry in the collection, and the newly added Entry is located at the head of the Entry chain. For details, please continue to see the description of the addEntry() method.

The resize() method is as follows:

Resize the HashMap. newCapacity is the adjusted unit

A new underlying array of HashMap is created. Line 10 in the above code calls the transfer method to add all the elements of the HashMap to the new HashMap, and recalculate the index position of the elements in the new array

When there are more and more elements in the HashMap, the probability of hash conflict is higher and higher, because the length of the array is fixed. Therefore, in order to improve the efficiency of query, the HashMap array must be expanded. The operation of array expansion will also appear in ArrayList, which is a common operation. After the HashMap array is expanded, the most performance consuming point appears: the data in the original array must be recalculated in the new array and put in, which is resize.

With the hash algorithm stored above as the basis, it is easy to understand this code. As can be seen from the above source code: when get ting elements from HashMap, first calculate the hashCode of the key to find an element at the corresponding position in the array, and then find the required element in the linked list at the corresponding position through the equals method of the key.

HashMap(): build a HashMap with an initial capacity of 16 and a load factor of 0.75.

initialCapacity: the maximum capacity of the HashMap, that is, the length of the underlying array.

In the implementation of HashMap, the maximum capacity of HashMap is determined through the threshold field:

According to the definition formula of load factor, threshold is the maximum number of elements allowed under the corresponding loadFactor and capacity. If it exceeds this number, resize again to reduce the actual load factor. The default load factor of 0.75 is a balanced choice for space and time efficiency. When the capacity exceeds this maximum capacity, the HashMap capacity after resizing is twice the capacity