Git is essentially a content addressable file system, which locates the file according to the SHA-1 hash value of the file content. The core of Git is a simple key value data store. Inserting any type of content into git database will return a key value. The inserted content can be retrieved again at any time through the returned key value. Any data can be saved to the through the underlying command hash object Git directory and return the corresponding key value.

When git init is used to create a warehouse, GIT will create one Git directory, whose directory structure is as follows: 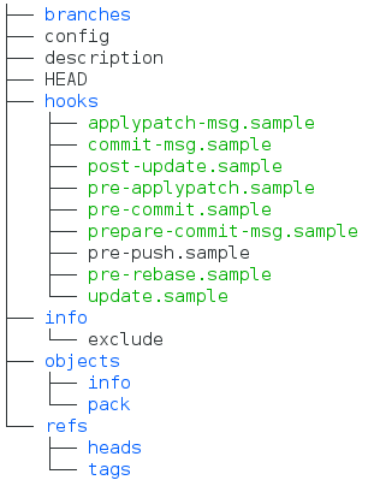 A. the description file is only used by GitWeb program.

C. The info directory contains a global exclude file, which is used to place files that you do not want to be recorded in Ignored patterns in gitignore file.

D. The hooks directory contains hook scripts on the client or server side.

E. The objects directory stores all data contents, including info and pack subdirectories.

F. The refs directory stores a pointer to the submission object of the data (Branch).

G. The HEAD file indicates which branch is currently checked out.

H. The index (to be created) file holds the staging area information.

objects, refs, HEAD and index are the four core parts of Git warehouse.

The SHA-1 hash value of Git object is calculated as follows:

When calculating the object hash, Git will first add a header to the object header. The header consists of three parts: the first part represents the type of object, which can take blob, tree and commit to represent data object, tree object and submission object respectively; The second part is the byte length of data; The third part is an empty byte, which is used to separate header and content. After adding the header to the content header, use the sha1 algorithm to calculate a 40 bit hash value.

When manually calculating the hash of Git objects, you should pay attention to:
A. The second part of the header is about the calculation of data length, which must be the length of bytes rather than the length of strings;
B. The operation of header + content is not string level splicing, but binary level splicing.

Git cat file can be used to read all git objects, including data objects, tree objects and submission objects.

You can view the contents of existing object objects

You can view existing object types

Data objects are usually used to store the contents of files, but do not include file names, permissions and other information. It has nothing to do with the path of the data object and its corresponding file and whether the file name is changed or not.

Use the - N option after echo to prevent the automatic addition of line breaks at the end of the string, otherwise the actual hash object passed to git will be hello,git\n

The content format of the data object is as follows:

Git initializes the objects directory and creates the pack and info directories, but both are empty.

Save text to Git database

-The w option instructs the hash object command to store data objects; If this option is not specified, the above command returns only the corresponding key value.

--stdin option indicates that the above command reads the content from the standard input. If this option is not specified, the path of the file to be stored must be given at the end of the command.

The command outputs a checksum with a length of 40 characters, which is a SHA-1 hash value and a checksum obtained by performing SHA-1 checksum operation with the data to be stored plus a header.

You can see a file in the objects directory. Git stores content in such a way that a file corresponds to a piece of content, and names the file with the SHA-1 checksum of the content plus the specific header information. The first two characters of the checksum are used to name subdirectories, and the remaining 38 characters are used as file names.

Through simple version control of a file, this paper reveals the principle of Git version control. First, create a new file and store its contents in the Git database.

Restore the test file to the first version:

Read the contents of test file

Restore the test file to the second version:

Read the contents of test file

In the above version control of the file, it is unrealistic to remember the SHA-1 value corresponding to each version of the file, and the file name is not saved.

Using the cat file - t command, you can view any object type stored inside Git, as long as the SHA-1 value of the given object.

Through the hash value of each data object, you can access any data object in the Git file system, but it is obviously unrealistic to remember the SHA-1 hash value of the data object. Data object only solves the problem of file content storage, while the storage of file name needs to be realized through tree object.

Tree objects contain multiple pointers to data objects or other tree objects, which are used to represent the directory hierarchical relationship between contents.

The latest tree object currently corresponding to an item can be viewed using the following commands:

The master^{tree} syntax indicates the tree object pointed to by the latest Submission on the master branch. The directory (the corresponding tree object record) is not a data object, but a pointer to another tree object.

Git LS files -- the stage command can view the contents of the staging area.

The content format of the tree object is as follows:

Git creates and records a corresponding tree object according to the state represented by the temporary storage area (i.e. index file) at a certain time. In this way, a series of tree objects (within a certain time period) can be recorded successively. Therefore, to create a tree object, you first need to create a staging area by staging some files. Create a staging area for the first version of a single file (test.txt file) through update index. Using the update index command, you can add the first version of the test file to a new temporary storage area.

--Add means to add a new file name. If you add a file name for the first time, you must use this option-- Cacheinfo < mode > < Object > < Path > is the mode, hash value and path of the data object to be added, < Path > means that not only a simple file name but also a path can be specified for the data object. In addition, it should be noted that after adding files using Git update index, you must use Git write tree to write to the Git file system, otherwise it will only exist in the temporary storage area.

The specified file mode is 100644, indicating that it is an ordinary file. Other options include: 100755, representing an executable file; 120000 represents a symbolic link.

git tree objects are generated in the process of commit, and their generation will be based on The contents of the index file in the git directory. The operation of git add is to save the information of the file into the index file, and generate a tree object according to the content of the index when committing.

Use Git update index to specify the name and schema for the data object, and then use Git write tree to write the tree object to the Git file system.

Create a new tree object, including test Txt file and a new file. 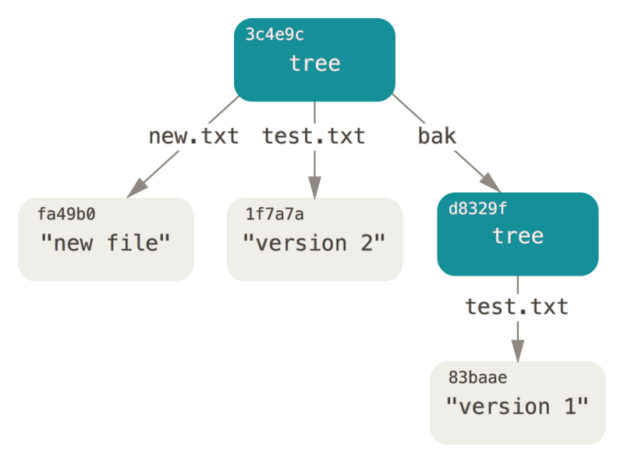 The submitted objects are as follows:

Git cat file can be used to view the submitted object.

For non first submission, you need to specify - p to specify the parent submission object, so that the code version can become a timeline.

Git cat file check the new submission object and see that there is more parent than the first submission. 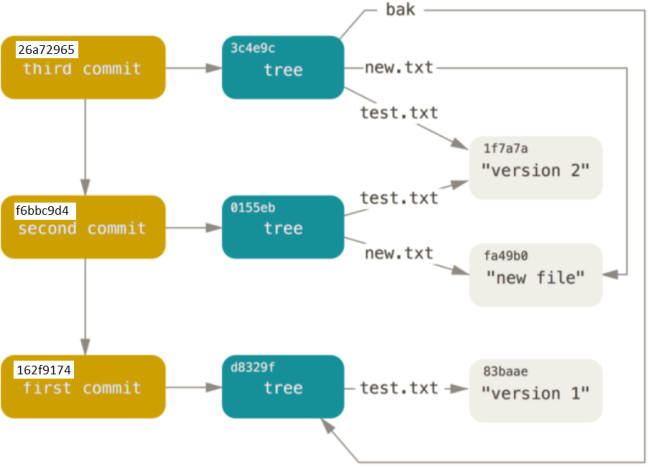 Merged commits may have more than one parent object. If a submission object has no parent object, it is called root commit, which represents the original revision of the project. Each project must have at least one root commit.

The content format of the submission object is as follows:

The first submission object is as follows: 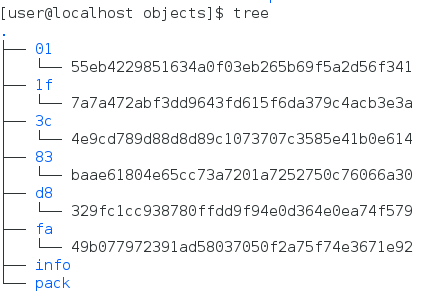 A. Calculate the length of content and construct header;

B. Add header in front of content and construct Git object;

C. Use sha1 algorithm to calculate the 40 bit hash code of Git object;

Use Nodejs to realize the function of GIT hash object - W, that is, calculate the hash value of GIT object and store it in Git file system:

Git operation often needs to browse the complete submission history, but in order to traverse the submission history to find all relevant objects, you must remember the SHA1 hash value of the last submission object. Therefore, you need a file to save the SHA-1 value, give the file a simple name, and then use the name to replace the original SHA-1 value. Yes, I can Find the file containing SHA-1 value in git/refs directory.

You can then replace the SHA-1 value with the newly created reference in the Git command.

In general, direct editing of referenced files is not recommended. If you want to update a reference, Git provides a more secure command update ref to edit the reference.

A Git branch is essentially a pointer or reference to the head of a series of submissions. If you want to create a branch on a submission object, you can do the following:

When git branch (branchname) is executed, Git obtains the Sha value of the latest submitted object through the HEAD file. The HEAD file is a symbolic reference. Unlike ordinary references, which contain a SHA-1 value, it is a pointer to other references and points to the current branch. You can view the contents of the HEAD file:

If git checkout test is executed, Git will update the HEAD file.

When git commit is executed, a submission object will be created and its parent submission field will be set with the SHA-1 value pointed to by the reference in the HEAD file.

The format in which git originally stored objects to disk is called the "loose" object format. However, GIT will package multiple loose objects into a binary file called "packfile" from time to time to save space and improve efficiency. Git packages objects when there are too many loose objects in the version library, or when git gc command is executed manually, or when pushing to a remote server. To see the packaging process, you can manually execute the git gc command to let git package the objects.