Previously on:
We specify that when you click the Save button, the onSubmit method of layer C will be executed to submit the form.

So what we need to do is to know the execution of onSubmit method in the parent component in the child component.
At first, I wondered whether angular has built-in this method. We only need to pass the onSubmit of the parent component to know its call time, but no similar method was found after testing.

To know the execution, we first declare a variable of type observable with the @ Input annotation in the sub component.

Then we declare this in the parent component

At this time, doSubmitSubject has the function of ejecting information from the component. doSubmit is used to pass it to the sub component for subscription.
If we want to implement the corresponding method of subcomponents when the user clicks save, we only need to call doSubmitSubject. in the onSubmit method. Pass the value to next().

Then we can subscribe to the doSubmit in the sub component

After knowing the method, we also need to know what Subject is and why it can realize the above functions.

After looking at its code, we find that Subject inherits from Observable.
Let's look at the asObservable method:

The official notes are as follows:

The observer logic can be called, that is, the observer logic Next () is equivalent to passing values to Observable in our daily use, so as to trigger the subscription of sub components and carry out corresponding operations.

This concludes the whole process. For ease of understanding, the following flow chart is provided: 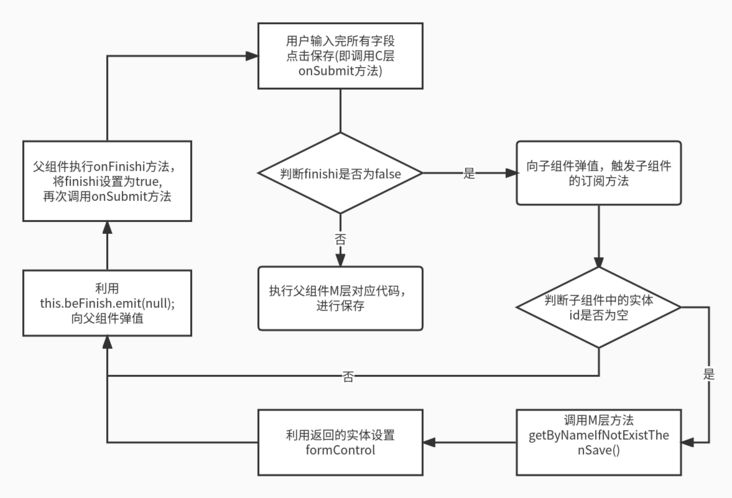 Many times, it is necessary to draw a flow chart with correct logic first, which can well prevent the code we write from entering the dead loop.