I want to use lock as a starting point to explain AQS. After all, synchronization lock is a common means to solve thread safety problems, and it is also a way we use more in our work.

Lock is an interface, and the method is defined as follows

There are many classes that implement the Lock interface. The following are some common Lock implementations

The simplicity and practicality of ReentrantLock

How to use ReentrantLock in practical applications? Let's demonstrate it with a simple demo

This code mainly does one thing, that is, continuously incrementing the shared variable count through a static incr() method. If multiple threads access this method without adding synchronization lock, there will be thread safety problems. Therefore, ReentrantLock is used to implement synchronous lock and release the lock in the finally statement block.
So let me raise a question. Let's think about it

When multiple threads compete for locks through locks, how do they wait and wake up when the lock fails to compete?

The full name of aqs is AbstractQueuedSynchronizer. It provides a FIFO queue, which can be regarded as a core component used to implement synchronization lock and other synchronization functions. The common ones are ReentrantLock, CountDownLatch, etc.
AQS is an abstract class, which is mainly used by inheritance. It does not implement any synchronization interface, but only defines the methods of obtaining and releasing synchronization status to provide custom synchronization components.
It can be said that as long as you understand AQS, most APIs in J.U.C can be easily mastered.
###Two functions of AQS
From the perspective of usage, AQS has two functions: exclusive and shared

Still take ReentrantLock as an example to analyze the use of AQS in reentry lock. After all, simple analysis of AQS does not have much meaning. Understanding this class diagram first can facilitate us to understand the principle of AQS 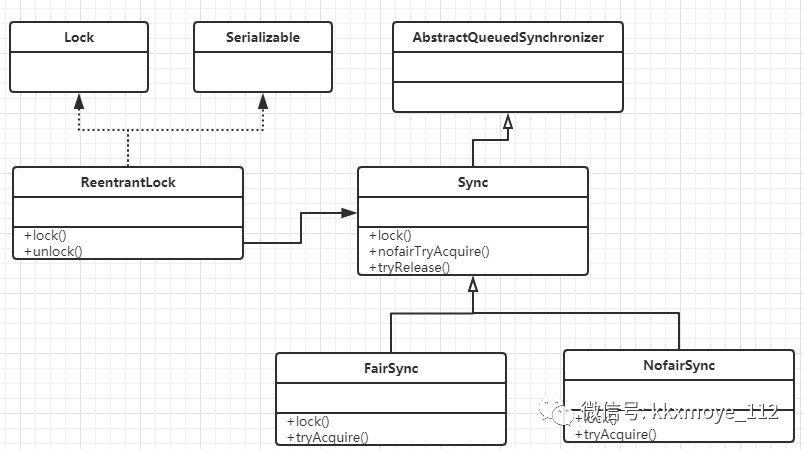 The implementation of AQS depends on the internal synchronization queue, that is, the two-way queue of FIFO. If the current thread fails to compete for the lock, AQS will construct the current thread and waiting status information into a Node to join the synchronization queue, and then block the thread. When the thread acquiring the lock releases the lock, it will wake up a blocked Node (thread) from the queue.

The AQS queue maintains a FIFO two-way linked list. The characteristic of this structure is that each data structure has two pointers, pointing to the direct successor Node and the direct predecessor Node respectively. Therefore, the bidirectional linked list can easily access the predecessor and successor from any Node. Each Node is actually encapsulated by a thread. When the thread fails to compete for the lock, it will be encapsulated as a Node and added to the ASQ queue

The Node class consists of the following

###Release the lock and add thread changes to the queue
####Add node
When lock competition and lock release occur, the nodes in the AQS synchronization queue will change. First, take a look at the scenario of adding nodes.

Two changes will be involved here

After knowing the basic architecture of AQS, let's analyze the source code of AQS, still using ReentrantLock as the model.

Call the lock() method in ReentrantLock. I use a sequence diagram to show the calling process of the source code

It can be seen from the figure that when the lock acquisition fails, the addWaiter() method will be called to encapsulate the current thread as a Node and add it to the AQS queue. Based on this idea, let's analyze the source code implementation of AQS

This is the entry to obtain the lock. Call the method in the sync class. What is sync?

I will explain the difference between the implementation of fair lock and unfair lock later in the article. The following analysis still takes unfair lock as the main analysis logic.

The code implementation logic of compareAndSetState is as follows

In fact, the logic of this code is very simple, which is to compare and replace it through cas optimistic locking. The above code means that if the value of state in the current memory is equal to the expected value expect, it will be replaced with update. If the update is successful, return true; otherwise, return false
This operation is atomic and will not cause thread safety problems. It involves the operation of Unsafe class and the meaning of state attribute at the first level.
state
AQS has such an attribute definition, which represents a synchronization state for the implementation of reentry lock. It has two meanings

It should be noted that the meaning of state is different for different AQS implementations.
Unsafe
The unsafe class is under the sun.misc package and does not belong to the Java standard. However, many basic Java class libraries, including some widely used high-performance development libraries, are developed based on unsafe classes, such as Netty, Hadoop, Kafka, etc; Unsafe can be considered as a back door left in Java, providing some low-level operations, such as direct memory access, thread scheduling, etc

Acquire is a method in AQS. If the CAS operation fails, it means that the state is no longer 0. At this time, continue the acquire(1) operation. Here, let's think about what the 1 parameter in the acquire method is used for? If you don't guess right, review the concept of state

The main logic of this method is

This method is used to try to obtain the lock. If it succeeds, it returns true and if it fails, it returns false
It rewrites the tryAcquire method in the AQS class, and we take a closer look at the definition of the tryAcquire method in the AQS. Instead of implementing it, we throw an exception. According to the general thinking mode, since it is a template method that is not implemented, it should be defined as abstract and implemented by subclasses? Let's think about why

The implementation code of tryAcquire(1) in NonfairSync is as follows

When the tryAcquire method fails to acquire the lock, it will first call addWaiter to encapsulate the current thread into a Node, and then add it to the AQS queue

If two threads T1 and T2 enter the enq method at the same time, t==null indicates that the queue is used for the first time and needs to be initialized first
If the cas of another thread fails, it will enter the next cycle and add the node to the end of the queue through cas operation

So far, an AQS queue has been constructed through the addwaiter method, and the thread has been added to the node of the queue

Pass the Node added to the queue as a parameter into the acquirequeueueueued method, which will preempt the lock

The previous logic is well understood. Let's mainly look at the function of shouldParkAfterFailedAcquire and parkAndCheckInterrupt

It can be seen from the above analysis that only the second node of the queue can have the opportunity to compete for locks. If the lock is successfully obtained, this node will be promoted to the head node. For the third and subsequent nodes, if (p == head) condition does not hold, first perform shouldParkAfterFailedAcquire(p, node) operation
The shouldParkAfterFailedAcquire method is to determine whether a thread competing for a lock should be blocked. It first determines whether the state of the front node of a node is Node.SIGNAL. If yes, it indicates that the node has set the State - if the lock is released, it should be notified, so it can block safely and return true.

If shouldParkAfterFailedAcquire returns true, it will execute the parkAndCheckInterrupt() method, which suspends the current thread to the waiting state through LockSupport.park(this). It needs to wait for an interrupt and unpark method to wake it up. The Lock operation is realized through the wait of such a FIFO mechanism.

LockSupport
LockSupport class is a class introduced in Java 6 and provides basic thread synchronization primitives. LockSupport actually calls functions in Unsafe class. In Unsafe, there are only two functions:

After analyzing the lock adding process, analyze the lock releasing process and call the release method, which does two things: 1. Release the lock; 2. Wake up the park thread

This action can be regarded as an operation to set the lock state, and subtract the passed parameter value from the state (the parameter is 1). If the result state is 0, set the Owner of the exclusive lock to null, so that other threads have the opportunity to execute.
In an exclusive lock, the state will increase by 1 when the lock is added (of course, you can modify this value yourself) and decrease by 1 when the lock is unlocked. After the same lock can be re entered, it may be superimposed into the values of 2, 3 and 4. Only when the number of unlock() corresponds to the number of lock() will the Owner thread be set to null, and only in this case will it return true.

In the method unparksuccess (node), it means to release the lock. It passes in the head node (the head node is the node that occupies the lock). After the current thread is released, it needs to wake up the thread of the next node