Welcome back to continue learning C language. After the data storage section, we come to the most important content in C language, pointer. Pointer can be said that in the eyes of beginners of C language or C + +, we are old friends who can't see their heads up. The data structure pointer of C language version is also the protagonist, Therefore, after we talked about pointers before, we will open another section to specifically study pointers. Therefore, you can see that my previous blog may include several sections, but after entering into C language, the article will only focus on one theme, because we have reached the stage of really studying hard, and our ideas should only belong to the present, Let's start now.

Then there is such an interview question:

Why? Why don't two arrays with the same content want to wait? Why are two pointers like waiting? In fact, we know that except for those two special cases, the array name represents the first element address, so if str1 and str2 are directly compared, the first element addresses of the two arrays are actually compared. Of course, they are not equal, because their two roots have two different spaces. Although str3 and str4 are two pointers, they both point to each other The string "hello world." therefore, in memory, they point to the same memory space. If str3 and str4 are dereferenced at the same time, they will get the initial 'h', so str3 and str4 are equal, and they are maintaining a space together.

So how to define an array pointer?

What do you think is right? When we look at these two codes, we need to consider the priority of operators. We know that the brackets are highly prioritized. When parentheses are used, the expressions in parentheses are first calculated, which is already known in mathematics. Therefore, *p should be combined with advanced technology, so this is a pointer, and then int [10] Combination, so the second formula is the correct way to write array pointers. (note here that the priority of [] is higher than that of * sign, so () must be added to ensure that P is combined with * first)

Your old friends appeared. Why do you want to talk about the array name repeatedly mentioned before? It's because we have a lot of content related to the array, so I think it's better to review this knowledge as a whole. 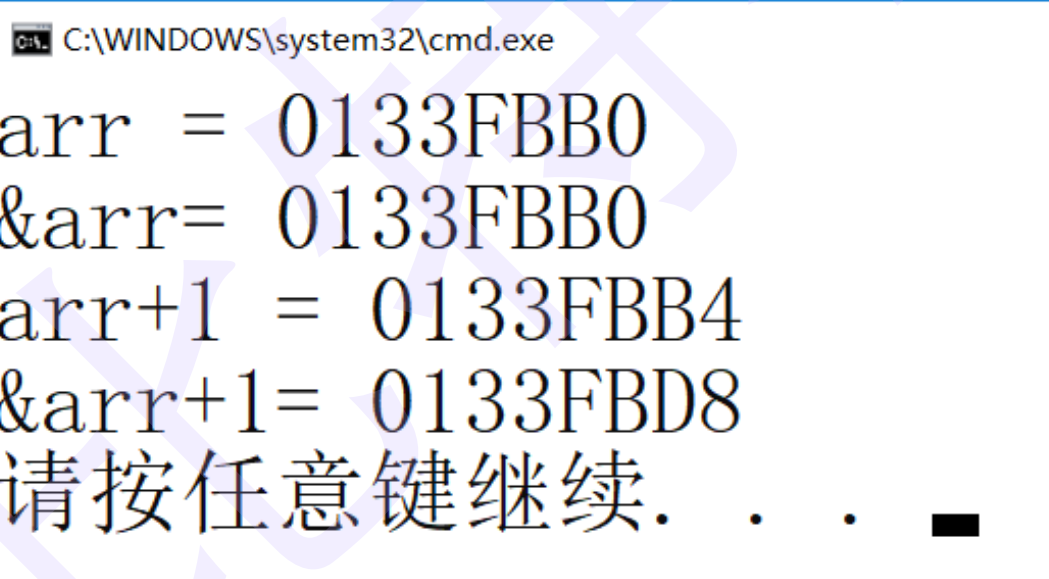 &Put arr into * p, which represents the p pointer. Now we need to maintain the whole array of arr, which is the way to use array pointers.

Use of an array pointer:

We all know that when these two concepts overlap, we look at the suffix. This suffix is an array, so we know that the pointer array is an array used to store pointers. It can also be understood as storing a pile of arrays. Different from the general idea of an array, we just replace the data elements in it with pointers that can point to space.

So how to use pointer array?

The above code represents the definition method of two-dimensional pointer array. If the code just mentioned is the address of the stored variable, the parr in this code is the address of the array, which realizes that the two-dimensional array has rows and columns. After understanding these, I need to emphasize that we know that arr represents the address of the first element, Since it is an address, we can find the elements through the address. Therefore, when we print the elements in the array, we can write arr[i], or we can access the space we want to access through the address dereference * (arr+i). Therefore, can we think that arr[i]==*(arr+i)? Yes, it does comply with the syntax. Now that we return to the above code, can we print the elements in parr without writing parr[i][j]? It's too low. I've learned pointer. OK, let's convert parr[i][j] according to the analysis just now. We know that parr stores the address of the array. For example, we need the third element of the second array. We have to find the first array first. The form of pointer number group is int * parr []. Yes, when we * parr get the first element, That is, the address of the first array. When we add + j, it means that I want to access the first few elements in the second array, so it can be written as * (parr[i]+j). Of course, each printing method has no distinction between high and low status. It is OK to complete our image efficiently and correctly.

After understanding this, let's take a look at these codes:

We talked about array pointer and pointer array, and we know that they can be combined. Let's go back and take a look at the array parameter transfer we talked about at the beginning. How many forms are there in the array transfer function?

We can see that there are so many forms of array parameter transmission, which can be directly transmitted to the arr array, through the pointer (as mentioned earlier), through the array pointer, or through the secondary pointer. These can all realize the transmission of array parameters. Of course, it is recommended to choose a simple method. After all, although too complex methods can be realized, But it's still hard to understand.

Please note that arr is an array of pointers, and all stored in it are pointers. Therefore, when the array name is used to directly pass parameters, the first element address is passed in, so a pointer needs to be taken to receive, so it is correct to pass arr.

We found that when we print the address of a function in the form of% p, we can also get the same effect as printing arrays and variables. The hexadecimal address is printed on the screen. Then the function does have an address in memory. Can we take a pointer to it? The answer is yes. Let's take a look at how function pointers are defined.

Are the answers output by (* pf)(4,5) and Add(4,5) the same? We know that Add(4,5) is to calculate 4 + 5, and pf is a pointer to Add. Then we know that the space can also be accessed through the pointer, so the Add function can also be found by pf. Therefore, the answer to the calculation of the two expressions is the same, and the second representation method is the calling function realized by using the function pointer.

Now, I'm sure you'll know how to observe the superposition of many operators. Let's look at two interesting Codes:

We have entered a new concept, function pointer array. We still understand this concept according to the suffix. First, it must be an array, and then an array used to store function pointers. Therefore, each element in this array points to a function.

So how should it be defined?

When we wrote the project earlier, a main function called many functions. When we need the functions of some functions, we need to call it. After learning the function pointer array, can we directly use it to store these functions as the elements of the array? The answer is yes, then we will implement it with the simplest computer

These are the nested use of functions, arrays and pointers. You need to taste them carefully and understand the priority relationship between these operators.

We can open MSDN and check qsort function

We can find that it is a sort function by name. The return value is vid. There are many parameters in it, except the previous void* base and size_t num and width, let's see, is it a function pointer? Therefore, we find that function pointers are very useful and powerful.

Since qsort is a sort function, how to sort? How to call the function pointer? Let's look at the code:

The first base in qsort is the starting address of the array to be queued, that is, arr, followed by size_ The num and width defined by t represent the number of elements in the generation array, and the other width means width, that is, the size of each element to be arranged (size_t==unsigned int). The last function pointer is used to compare the size of the two passed in elements. How can it be compared? Through the subtraction of two elements, if it is greater than zero, it means that the first element is greater than the second element. If it is less than zero, it means otherwise. We can see that some return values and parameter types are represented by void *. Why? Is there still space for this data type? In fact, this means that any type can be passed in or returned. There is no type restriction on the data to be sorted. Void * can be converted to any type, int * can be char * can be float *. I don't need to say more about the role of const. The parameters passed in the comparison function cannot be changed at will, otherwise the sorting accuracy will be affected. And CMP_ The operation that int passes into the qsort function is called a callback function.

If we define a structure and shoot relative to the data in the structure, we can also use qsort. Of course, the comparison method is still subtraction. If it is Chinese characters, the subtraction is converted into binary code values. You can get your own compiler and input several data to test.

Our bubble sorting can also be realized by callback function:

We'd better encapsulate a BubbleSort function first. The parameters passed in are roughly the same as the array sorting just now, but we need to not only judge the size, but also exchange them. Here we see that the parameter type of cmp call in if judgment is actually char *. In fact, we don't need to be surprised. It is also multiplied by a width, That is, it is still equal to the size of an int type. Other functions are similar to ordinary bubble sorting.

After talking so much, we still need to implement the questions. Let's take a look at some interview questions about arrays and pointers. I believe we will have a good grasp of these questions. (I have written the analysis of the topic in the back. If you don't understand it, you can read the relevant contents in the front. I won't repeat it here.)

Well, let's talk about the advanced pointer. I believe it will take some time to master all these contents, so come on, let's see you next time.