Interpretation of jdk8 HashMap source code based on Java

HashMap is a Map interface implementation based on hash table. It exists in the form of key value storage, that is, it is mainly used to store key value pairs. Among them, key value can be null, and the mapping is not orderly. The implementation of HashMap is not synchronous, that is, the thread is not safe.

jdk1.7 -: it is composed of array + linked list. The array is the main body. The linked list mainly exists to solve hash conflicts (i.e. the array index values calculated through the key are the same) (the "zipper method" solves conflicts). 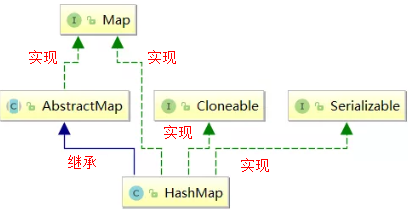 Note: in the tablesizefor method, the calculated data is returned to the call, and directly assigned to the threshold boundary value. Some people will think this is a bug. It should be written like this threshold = tableSizeFor(initialCapacity) * this. LoadFactor, so as to meet the meaning of threshold (the capacity will be expanded when the size of HashMap reaches the threshold). However, please note that in the construction methods after jdk8, the member variable table is not initialized. The initialization of table is postponed to the put method, where the threshold will be recalculated.

Question: why add 1.0F in the line float ft = ((float)s / loadFactor) + 1.0F?
The result of s/loadFactor is decimal, plus 1.0F, (int)ft, which is equivalent to rounding up the decimal to ensure greater capacity as much as possible, which can reduce the number of calls to resize. So + 1.0F is to get more capacity.

The put method is complex, and the implementation steps are as follows:

The specific methods are as follows:

Question: (H = key. hashCode()) ^ (H > > > 16), the high 16bit remains unchanged, the low 16bit and high 16bit do an XOR, and the obtained hashCode is converted to 32-bit binary. Why do you do this?
Answer: if n is the length of the array is very small, assuming 16, then n - 1 is 1111. This value and hashCode directly perform bitwise and operations. In fact, only the last four bits of the hash value are used. If the high-order change of the hash value is large and the low-order change is small, it is easy to cause hash conflict. Therefore, the high-order and low-order are used here to solve this problem.

After adding nodes, judge whether the number of nodes is greater than tree_ The threshold value of threshold is 8. If it is greater than, the linked list will be converted into a red black tree. The method is treeifyBin.

When to expand: when the number of elements in the HashMap exceeds the array size (array length) * loadFactor, the array will be expanded. The default value of loadFactor is 0.75.

Capacity expansion will be accompanied by a re hash allocation, and all elements in the hash table will be traversed, which is very time-consuming. When writing programs, try to avoid resize.

Therefore, during HashMap capacity expansion, you do not need to recalculate the hash. You only need to see whether the new bit of the original hash value is 1 or 0. If it is 0, the index remains unchanged, and if it is 1, the index becomes "original location + old capacity". 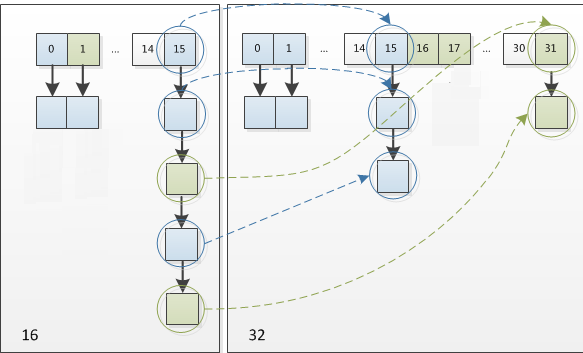 It is precisely because of this ingenious rehash method that not only saves the time to recalculate the hash value, but also because the newly added 1 bit is 0 or 1, it can be considered as random. In the process of resizing, it is ensured that the number of nodes on each bucket after rehash must be less than or equal to the number of nodes on the original bucket, so as to ensure that there will be no more serious hash conflict after rehash, The previously conflicting nodes are evenly dispersed into new buckets.

3.1 jdk8 why should red black trees be introduced?

Answer: jdk1 Before 8, the implementation of HashMap was array + linked list. Even if the hash function is better, it is difficult to achieve 100% uniform distribution of elements. When a large number of elements are stored in the same bucket, the bucket becomes a long linked list, so HashMap is equivalent to a single linked list. If the single linked list has n elements, the traversal time complexity is O(n), completely losing its advantages.

A: for the hashCode of the key, perform the hash operation, move the unsigned right 16 bits, and then perform the XOR operation.
There are also square middle method, pseudo-random number method and remainder method. These three kinds of efficiency are relatively low. The operation efficiency of unsigned right shift 16 bit XOR is the highest.

3.3 what happens when the hashcodes of two objects are equal?

A: hash collision will occur. If the content of the key value is the same, replace the old value. Otherwise, insert it at the end of the linked list. When the array length is greater than 64, if the length of the linked list exceeds the threshold 8, it will be converted to red black tree storage.

3.4 what is hash collision and how to solve it?

3.5 how to store key value pairs if the hashcodes of two keys are the same?

A: compare whether the contents are the same through equals. Similarly, the new value will overwrite the old value, otherwise the new key value pair will be added to the hash table.

3.6 why does the number of nodes in the HashMap bucket exceed 8 before turning into a red black tree?