Before explaining the two-way cycle linked list, let's take a look at the most simple linked list for comparison. Its structural characteristics are: one-way, no lead and no cycle. The structure diagram is as follows:

This linked list is characterized by simple structure and easy to understand. Each node has only one pointer to the next node, and the address of the previous node is not saved. Secondly, it has no header node, and the first node saves the data. Finally, the linked list does not have a circular structure. The post pointer of the last node stores a null pointer to indicate the end of the linked list.

Compared with the basic linked list, the bidirectional linked list does not need to traverse when deleting / adding nodes at random positions. Instead, it can find the front and rear nodes of the nodes to be deleted / added through the front pointer, and complete the deletion / addition of nodes at any position with O(1) time complexity  .

The post pointer of the last node of the circular linked list does not save the null pointer, but the address of the first node. Its structure diagram is as follows:

Combined with the characteristics of the above three linked lists, you can get a two-way leading circular linked list. Its structure diagram is as follows:

Although the structure of this linked list looks very complex, it also contains the advantages of the above three linked lists, which can be well reflected when we realize it.

Because it is a two-way linked list, in addition to the post pointer next, we also add the pre pointer prev to refer to the previous node. typedef is used to define the type of data, so as to change the data type saved in the data field. 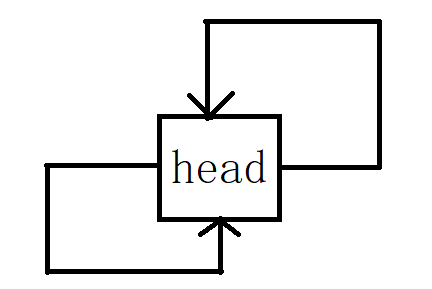 Because the linked list is a two-way cycle, we can easily find the tail node through the front pointer of the head pointer. The tail insertion can be completed by connecting the new tail node with the old tail node and head node.

Header deletion also ensures that there is at least one node in the linked list that saves data through assertion, otherwise the header node may be deleted. Then save the node to be deleted first, and the connection node can complete the header deletion.

Because there are header nodes, the nodes that traverse the linked list during output should traverse from the next node of the node. Because it is a loop structure, when cur points to the head node, it means that the linked list has completed a traversal, and then exit the loop.

Inserts a new node before the specified node

First save the previous node at the specified location to facilitate the connection of new nodes, and then create new nodes and connect them.

By constructing a two-way leading circular linked list, we can find that although the structure of this linked list is complex:

2. Each node contains a pre pointer and a post pointer.

It can be seen from the above implementation stage that although the structure of this linked list is very complex, it greatly reduces the difficulty of implementation: because of the circular structure, there is no need to find the tail during tail insertion. You can directly find the tail node through the front pointer of the head pointer for insertion. With the bidirectional structure, when inserting a node in front of any node, you do not need to traverse the linked list to find the previous pointer, but you can directly find the previous node through the previous pointer to complete the insertion. With the header node, there is no need to judge whether the linked list is empty during insertion.

And this structure also has great advantages in use: it saves a lot of traversal (such as finding the tail and finding the previous node), which greatly reduces the time complexity of this linked list in operation, and greatly improves the efficiency compared with the simplest linked list.

However, this structure also has a small disadvantage. Because of the existence of the front pointer, every time a node is created, it takes an extra pointer space. However, this can not deny that the two-way leading circular linked list is very practical.