Docker is an open source application container engine, which allows developers to package their applications and dependency packages into a portable image, and then publish them to any popular Linux or Windows operating system, or realize virtualization. Containers are completely sandboxed, and there will be no interface between them.

The difference between Docker and traditional Virtualization:

Docker image is a special file system. In addition to providing the program, library, resource, configuration and other files required by the container during operation, it also includes some configuration parameters prepared for operation (such as anonymous volume, environment variable, user, etc.). The image does not contain any dynamic data, and its content will not be changed after construction.

It can be understood as a software installation package, which can be easily spread and installed.

The relationship between image and Container is like a class and instance in object-oriented programming. Image is a static definition, and Container is the entity of image runtime. Containers can be created, started, stopped, deleted, suspended, etc.

The essence of a container is a process. The process in the container runs in an isolated environment and is used as if it were operating under a host independent system. This feature makes container encapsulated applications more secure than running directly on the host.

It can be understood as the state after software installation. Each software running environment is independent and isolated, which is called container.

After the image is built, it can be easily run on the current host. However, if we need to use this image on other servers, we need a centralized service for storing and distributing images, such as Docker Registry.

Warehouse names often appear in the form of two-stage paths, such as kint216 / flash. The former often means the user name in the Docker Registry multi-user environment, while the latter is often the corresponding software name. However, this is not absolute, depending on the specific Docker Registry software or service used.

Execute the following command in cmd with administrator privileges: 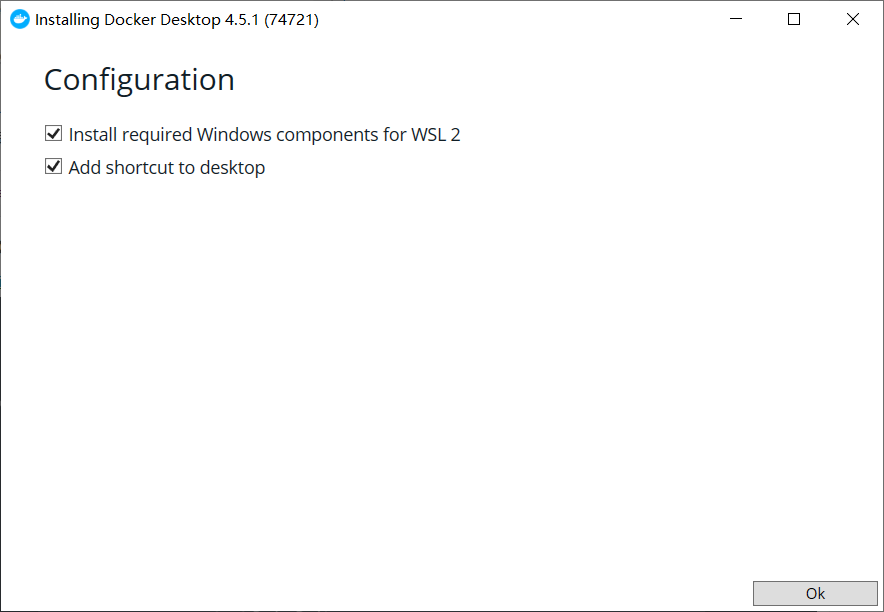 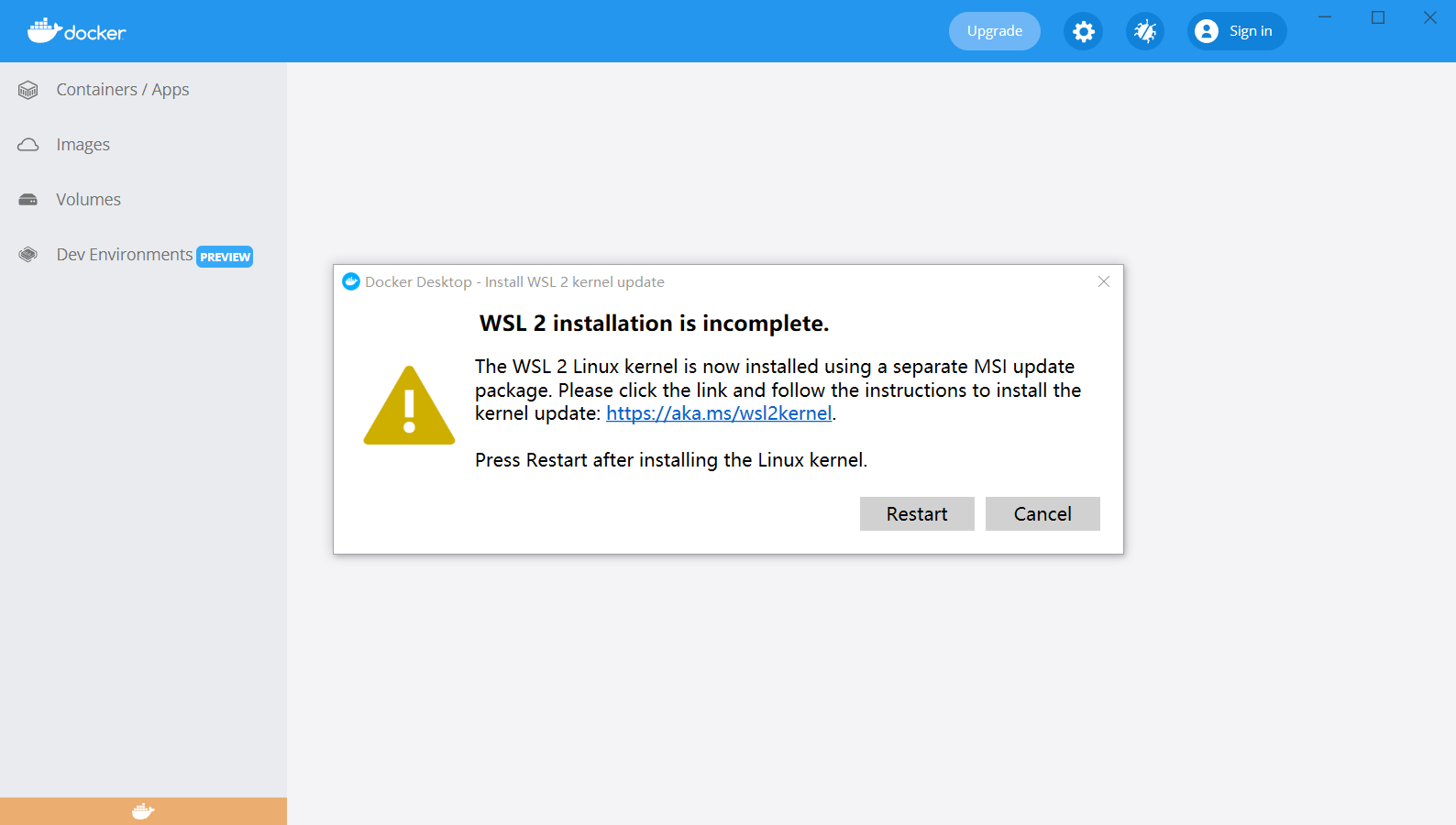 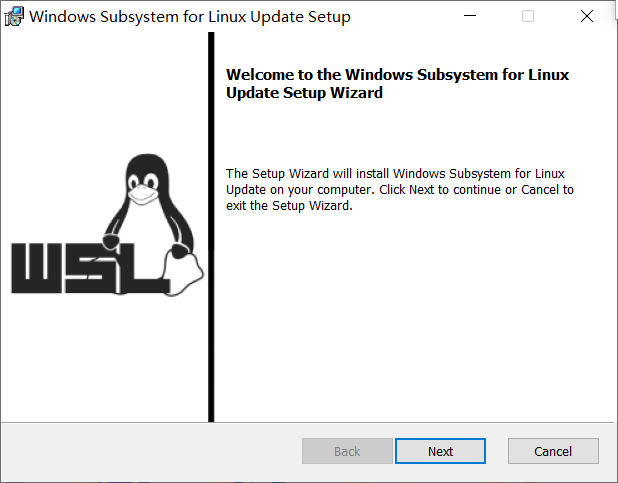 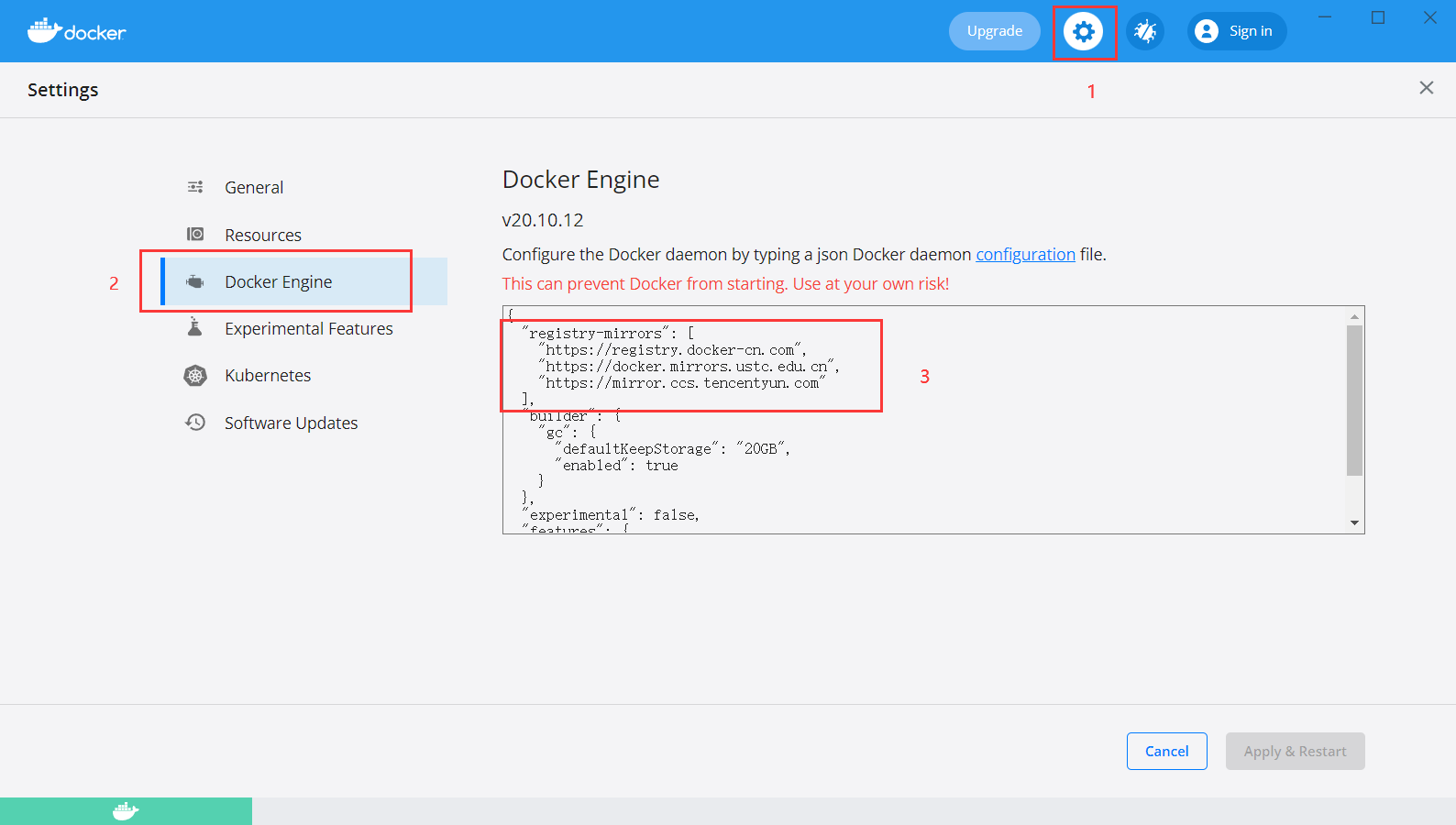 There are a large number of high-quality images available on the Docker Hub. The command to obtain images from the Docker image warehouse is docker pull. The command format is:

The specific options can be seen through the docker pull --help command. Here we will talk about the format of the image name.

The above command does not give the address of Docker image warehouse, so the image will be obtained from Docker Hub (docker.io). The image name is Ubuntu: 18.04, so the image labeled 18.04 in the official image library / Ubuntu warehouse will be obtained. The last line of the output result of the docker pull command gives the full name of the image, namely: Docker io/library/ubuntu:18.04.

List the downloaded images. You can use the docker image ls command.

The image ID is the unique identification of the image. One image can correspond to multiple labels. Therefore, in the above example, we can see that ubuntu:18.04 and ubuntu:bionic have the same ID because they correspond to the same image.

To delete a local image, you can use the docker image rm command. The format is:

Among them, < Image > can be image short ID, image long ID and image name.

For example, we have some images:

We can use the full ID of the image, also known as the long ID, to delete the image, but more often we use the short ID to delete the image. docker image ls lists short IDS by default. Generally, it takes more than the first three characters, as long as it is enough to distinguish them from other images.

For example, here, if we want to delete the docker / getting started image, we can execute the following steps:

We can also delete the image by using the image name, that is < warehouse name >: < label >.

If you observe the output information of the above commands, you will notice that the deletion behavior is divided into two types: Untagged and Deleted. As we mentioned earlier, the unique identification of an image is its ID and summary, and an image can have multiple labels.

Therefore, when we use the above command to Delete the image, we are actually asking to Delete the image of a label, which is the Untagged information. Because an image can correspond to multiple labels, when we Delete the specified label, there may be other labels pointing to the image. If this is the case, the Delete behavior will not occur. Therefore, when the docker image rm ubuntu:18.04 instruction is executed, only the tag name 18.04 is cancelled, because the ubuntu image has other tag names bionic

When all the labels of the image are cancelled, the image is likely to lose its meaning of existence, so the deletion behavior will be triggered. The image is a multi-layer storage structure, so it is also judged and deleted from the upper layer to the basic layer. The multi-layer structure of image makes image reuse very easy, so it is likely that some other image is dependent on a layer of the current image. In this case, the deletion of this layer will not be triggered. The current layer will not be deleted until no layer depends on the current layer.

A container is an application or group of applications that run independently and their running environment.

There are two ways to start a container. One is to create a new container based on the image and start it, and the other is to restart the container in the terminated state.

With an image, we can start and run a container based on this image. The main command used is docker run.

For example, the following command starts a bash terminal to allow users to interact.

After entering the container, we can operate under the Shell and execute any required commands. Here, we execute cat / etc / OS release, which is a common command for Linux to view the current system version. From the returned results, we can see that the container is Ubuntu 18.04.1 LTS system. Finally, we exited the container through exit.

When using docker run to create containers, the standard operations of Docker running in the background include:

You can directly start an exited container by using the docker container start command.

More often, Docker needs to be run in the background rather than directly outputting the results of executing commands. At this point, you can add the - d parameter.

If you do not use the - d parameter, run the container.

As you can see from the above example, the container will print the output.

If the - d parameter is used, run the container.

After starting with the - d parameter, a unique id will be returned. You can also view the container information through the docker container ls command.

To obtain the output information of the container, you can use the docker container logs command.

You can also view the logs of containers in docker desktop.

Containers in the terminated state can be restarted with the docker container start command.

In addition, the docker container restart command will terminate a running container and then restart it.

When using the - d parameter, the container will enter the background after starting. Sometimes you need to enter the container for operations. You can use the docker attach command or docker exec command.

If you exit, it will cause the container to stop.

If you exit, it will not cause the container to stop.

The docker exec instruction is recommended.

You can use docker container rm to delete a container in a terminated state.

If you want to delete a running container, you can add the - f parameter. Docker will send SIGKILL signal to the container.

The image is the basis of the container. Each time docker run is executed, which image will be specified as the basis for the container to run. In the previous examples, we used images from Docker Hub. Using these images directly can meet certain needs. When these images cannot meet the needs directly, we need to customize these images.

The following is a demo based on the flash framework.

The back-end code is as follows. Open the web page to display Hello, World!:

Dockerfile contents are as follows:

docker executes step by step according to the instructions we write, as shown in the figure below.

At this point, open localhost:8080 in the browser, and you can see Hello World in the web page!

Note: the host number of the back-end code of Flask should be written as 0.0.0.0, otherwise an error will be reported when the container is opened on the machine after startup.

A data volume is a special directory that can be used by one or more containers. It has the following characteristics:

The following demonstrates starting a container that mounts data volumes:

At this point, you can see that the test file also appears in the data volume.

Create a mount directory locally. The directory I use here is D:\Volume.

Mount a local host directory as a data volume. The command is as follows:

To create a file in a container:

Updates are also synchronized in the local folder. 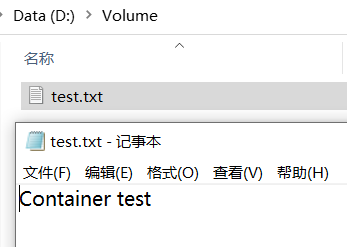 In many cases, we need multiple containers to cooperate with each other to complete a task. For example, to implement a Web project, in addition to the Web service container itself, you often need to add the back-end database service container, and even include the load balancing container. Compose just meets this need. It allows users to use a separate docker - compose YML template file (YAML format) to define a set of associated application containers as a project.

Here I use a simple personal blog system as a demonstration, including flash back-end and MySQL database.
Warehouse address: https://github.com/LenkyAndrews/notebook-docker

The file directory is as follows:

The dockerfile in the backend flash folder is as follows:

The dockerfile in the mysql folder of the database is as follows:

notebook.sql is the database initialization file, which will create the libraries and tables needed by flash application. In the official mysql image, the / docker entrypoint initdb.exe is automatically executed when the container is started D folder (including shell script and sql script). So we just copy the initialization file to / docker entrypoint initdb. When the image starts D folder is OK.

To assemble multiple services that the project depends on, we need to write a docker - compose YML file, which describes which services depend on.

After completing the above steps, click docker-compose The directory where the YML file is located, execute the command:

Problem 1: the flash container cannot access the MySQL container, and cannot be connected after changing the host number for many times.

The error message of the web page is as follows:

**Solution: * * after querying similar problems on github and stack overflow, I found that my host and port were written incorrectly. Host should be written as the name of the database service, namely docker - compose mysql in YML; Because I mapped port 3306 of the container to port 3307 of the local host, I always wrote that port 3307 failed. The two containers are in the same network, so they can communicate with each other after changing to port 3306.

**Solution: * * install the cryptography package or set the encryption method (in docker-compose.yml or modify it manually). 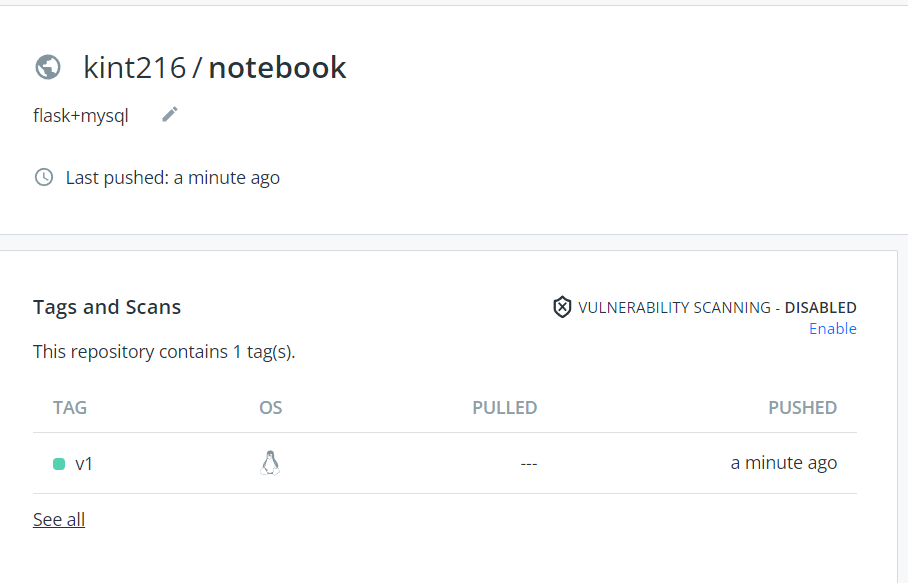 sqlyog:2058 error occurred when connecting to mysql on the local host. This means that the client does not support caching_sha2_password encryption method. 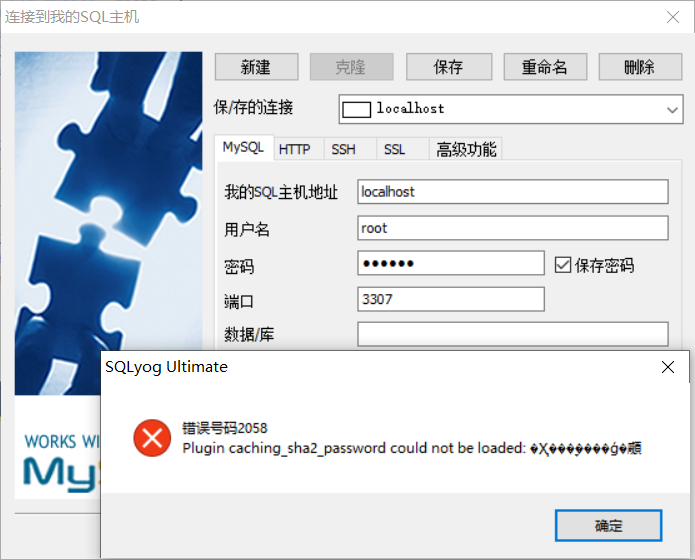