Introduction: This article is an introduction to kubernetes (replaced by k8s below). It will cover the architecture of k8s, cluster construction, an example of Redis, and a tutorial on how to develop an operator using operator SDK. In the process of the article, the concepts of Pod, Deployment, stateful set, etc. will be introduced. These concepts are introduced through examples, which is easier to understand and practice. 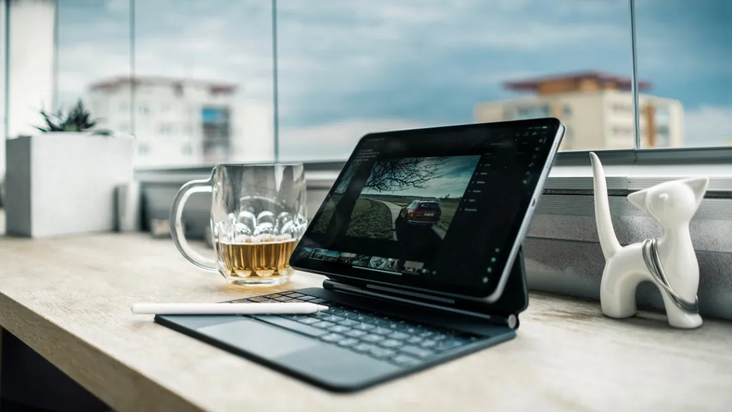 This article is an introduction to kubernetes (replaced by k8s below). It will cover the architecture of k8s, cluster construction, an example of Redis, and a tutorial on how to develop an operator using operator SDK. In the process of the article, the concepts of Pod, Deployment, stateful set, etc. will be introduced. These concepts are introduced through examples, which is easier to understand and practice. The article refers to many blogs and materials, which are put in the resources section at the end. 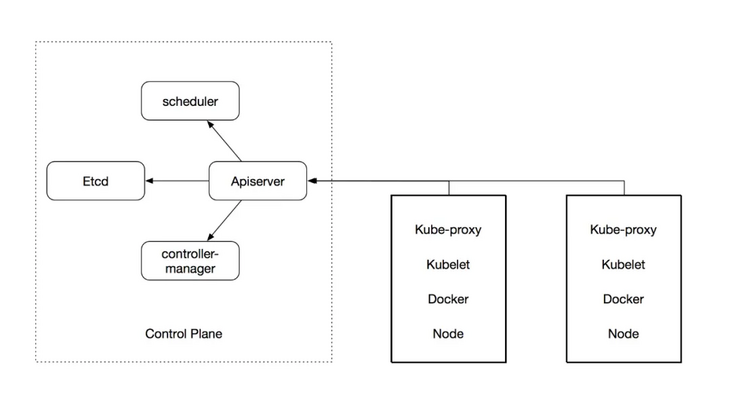 Let's take a look at the k8s cluster architecture. From left to right, it is divided into two parts. The first part is the Master Node (that is, the Control Plane in the figure) and the second part is the Node node.

The Master node generally consists of four components: apiserver, scheduler, controller manager and etcd. What are their respective roles

To sum up, k8s cluster is an architecture composed of two components: Master and Node nodes. The Master Node is the brain of the whole cluster, and the Node node runs the Master Node scheduling application. We will explain the interaction process of these components with a specific scheduling example later.

Having finished the components in the k8s cluster, let's first look at how to build a k8s cluster. There are the following methods (refer to the link at the end of the article):

The following examples in this article are built with the local Docker Desktop APP k8s.

Let's take a look at how to deploy Redis services on k8s top from a practical requirement.

If we want to deploy a stand-alone version of Redis on k8s, we can execute the following command:

You can use kubectl exec to enter the internal connection of Pod and Redis to execute the command:

So what is the relationship between Pod and redis? Redis here is actually a service started by the Docker process, but in k8s, it is called Pod.

Let's talk about the next k8s concept pod. Pod is the smallest scheduling unit in k8s. A pod can contain multiple dockers. These dockers will be scheduled to the same Node. These dockers share NetWork Namespace and can declare to share the same Volume to share disk space.

What are the benefits? In fact, in the real world, many applications need to be deployed on the same machine. For example, if the Redis log collection plug-in wants to collect logs, it must be deployed on the same machine as Redis to read Redis logs. When we talked about the background earlier, we mentioned that Docker Swarm has some problems, one of which is that it is only based on Docker scheduling, Although the affinity can also be set to schedule two dockers on the same machine, because they cannot be scheduled together, one Docker will be scheduled to a machine with few resources in advance, resulting in the failure of the second Docker scheduling.

For example, we have two containers, A and B, Redis and log collection components, which need 2g memory respectively. Now we have two nodes, node1 3.5 memory and node2 4g memory. Under the scheduling policy of Docker Swarm, Redis is scheduled first, which may be scheduled to node1. Then we schedule the log collection components. It is found that node1 has only 1.5g memory, Scheduling failed. However, in k8s, scheduling is scheduled according to pod. When two components are in A pod, scheduling will not consider node1.

Although the Pod can run the Redis service, it does not have high availability, because once a Pod is bound to a Node, it will never leave the Node unless the binding changes (the pod.spec.node field is modified), which means that if the host goes down, This Pod will not actively migrate to other nodes. In order to keep the service running, you need to use a controller such as Deployment.

Redis has disappeared, but redis-deployment-866c4c6cf9-zskkb changed its name and appeared again!

Deployment can define multiple replica pods to provide migration capabilities for applications. If you simply use the Pod, in fact, when the application is scheduled to a machine, the machine goes down and the application cannot migrate automatically. However, if you use deployment, you will call ReplicaSet (a controller) to ensure that the number of application replicas in the current cluster is consistent with the specified number.

3 k8s use yaml to describe commands

In k8s, you can use kubectl to create simple services, but another way to create complex services is to provide yaml files. For example, the above command to create a Pod can be replaced by the following yaml file. After executing kubectl create, you can see that redis Pod has been created again. 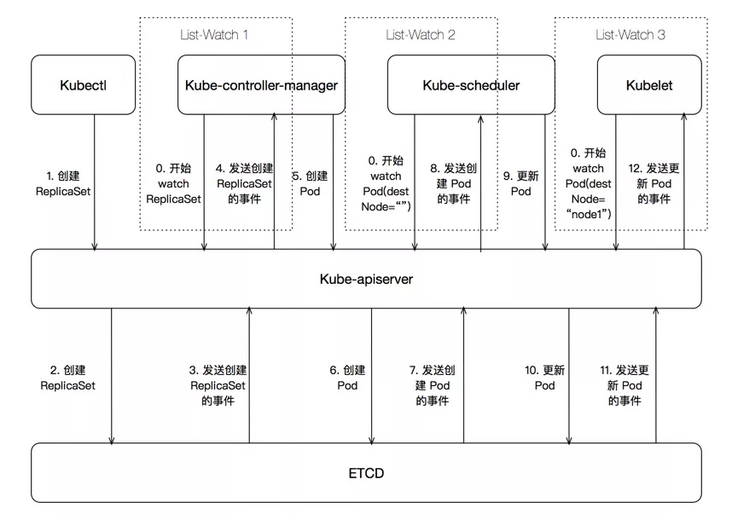 Let's take a look at what the k8s cluster does after kubectl create deployment redis deployment -- Image = redis is distributed.

In these steps, the role of apiserver is self-evident, so it is connected to other components and ETCD. However, apiserver can be expanded horizontally, and then through load balancing, ETCD has become a bottleneck in the k8s architecture.

When I first looked at the architecture, I thought about why apiserver, scheduler and controller manager do not compose a component. In fact, borgmaster is like this in Google Borg, and its functions are also these functions, but together, they also found that borgmaster will have some performance problems after the cluster is large, including the heartbeat of kubelet, So k8s from the beginning, open source, three components in the design are better to maintain the code.

We have deployed the stand-alone version of Redis and realized the continuous operation of the service through Deployment. Next, let's see how to deploy the master-slave version. One of the difficulties is how to determine the master-slave synchronization relationship.

Then start the stateful set and find that redis-sfs-0 and redis-sfs-1 pod s appear. They are officially numbered according to the rule of name index

Then, we continue to check whether the master-slave relationship is effective. After checking the log of redis-sfs-1, we find that:

It seems that redis-sfs-1 doesn't know redis-sfs-0 because we haven't let them know each other. This mutual understanding requires k8s a Service called Headless Service, which is a mechanism used in the k8s project to expose a group of pods to the outside world. For example, if a Deployment has three pods, I can define a Service. Then, as long as users can access the Service, they can access a specific Pod in two ways:

Headless Service can resolve the address of a Pod through DNS. The rule of this DNS address is:

Let's create the Headless Service corresponding to the cluster:

After checking again, it is found that redis-sfs-1 has successfully synchronized the active and standby, because redis-sfs-0.redis-sfs.default.svc.cluster.local is the only accessible in the cluster after the Headless Service is created.

At this time, no matter which Pod we delete, it will be pulled up according to the original name, so as to ensure the preparation relationship. This example is only an example of StatefulSet. Through analysis, it can be found that although it can maintain the master-slave relationship, when the master is hung, the standby cannot be switched, because no component can help us do this switching operation, One way is to use Redis Sentinel. You can refer to the configuration of this project: k8s redis ha master. If your k8s is newer, you need to merge this PR

Although StatefulSet is available, it can only be useful for the basic version. If you want to customize more complex operations, the k8s solution is operator. In short, operator is the solution to customize your k8s object and the operation corresponding to the object.

What is the object? A Redis cluster, an etcd cluster and a zk cluster can all be an object. In reality, we define what we want to describe. In fact, we set a kind in k8s yaml. In the previous example, we used Pod, Deployment and StatefulSet, which are the default implementations of k8s. Now if we want to define our own objects, there are two processes:

The operator method is based on programming and can be implemented in many languages. The most used language is go language. Usually, we will complete it with the help of operator SDK, because a lot of code will be generated automatically. It is equivalent that the operator will generate the framework, and then we will implement the corresponding business logic.

The above steps actually generate a framework for operator. Next we first define what memcached clusters include, modify the default implementation to Size, represent the number of Memcached in a Memcached cluster, and finally call make generate and make manifests to generate deepcopy and CRD resources.

The second step is to define what to do when creating a Memcached cluster.

You can view the operator logs through kubectl logs:

So far, the task of our operator SDK has come to an end temporarily.

This paper introduces the architecture of k8s and the functions of various components, introduces the concepts of pod, deployment and stateful set in k8s through a step-by-step Redis example, and demonstrates a complete example of operator production through operator SDK.

Original link
This article is the original content of Alibaba cloud and cannot be reproduced without permission.