This paper mainly introduces the common locks and the underlying analysis of synchronized, NSLock, recursive lock and conditional lock

Refer to the performance data comparison diagram of a lock, as shown below 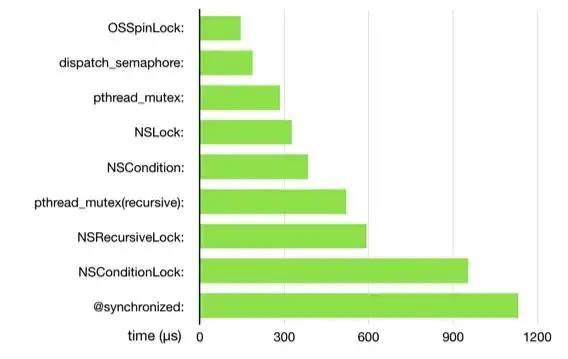 Locks in the figure are roughly divided into the following categories:

In fact, the basic locks include three types: spin lock, mutex lock and read-write lock. Other locks, such as conditional lock, recursive lock and semaphore, are encapsulated and implemented by the upper layer.

Since there was a security problem with OSSpinLock, it was abandoned after iOS10. The reason why spin locks are unsafe is that after obtaining the lock, the thread will always be busy waiting, resulting in the reversal of the priority of the task.

After OSS pinlock is discarded, its alternative is to internally encapsulate the os_unfair_lock, and os_unfair_lock will be in the sleep state when locking, rather than the busy state of spin lock

atomic is applicable to the modifier of attributes in OC. It comes with a spin lock, but it is generally not used. It is nonatomic

In the previous article, we mentioned that the setter method will call different methods according to the modifier. Finally, the reallySetProperty method will be called uniformly, including atomic and non atomic operations

As can be seen from the source code, spinlock is used for the attributes modified by atomic_ T lock processing, but the OSSpinLock mentioned earlier has been abandoned. Here is spinlock_t at the bottom is through os_unfair_lock replaces the locking implemented by OSSpinLock. At the same time, in order to prevent hash conflict, salt adding operation is used

Through the comparison of the above two implementation logics, it is found that they have one thing in common. When obj exists, they will obtain SyncData through id2data method

Therefore, the id2data method is mainly divided into three cases

What's wrong with the following code?

The running result shows that the running will crash

The main reason for the crash is that testArray becomes nil at a certain moment. According to the @ synchronized underlying process, if the locked object becomes nil, it cannot be locked. This is equivalent to the following situation. The non-stop retain and release inside the block will not be released at one moment and the next will be ready for release, which will lead to the generation of wild pointers

According to the above code, open edit scheme - > Run - > diagnostics and check Zombie Objects  ， To see if it is a zombie object, the results are as follows

Go directly to the NSLock definition, which follows the NSLocking protocol. Let's explore the underlying implementation of NSLock

Returning to the previous performance chart, we can see that the performance of NSLock is second only to   pthread_mutex, very close

What are the problems in the following nested block code?

The operation results are as follows

This is mainly because of the recursion used in nesting and the use of NSLock (simple mutex lock. If you don't come back, you will sleep and wait all the time), that is, there will be a blocking situation of adding lock and waiting for unlock

Therefore, the following methods can be used to solve this situation

pthread_mutex is the mutex itself. When the lock is occupied and other threads apply for the lock, they will not be busy waiting, but block the thread and sleep

Recursive lock is mainly used to solve a nested form, in which loop nesting is most common

NSCondition   It is a condition lock, which is rarely used in daily development. It is somewhat similar to semaphores: thread 1 needs to meet condition 1 before going down, otherwise it will block and wait until the condition is met. The classic model is the production consumer model

NSConditionLock is a conditional lock. Once one thread obtains the lock, other threads must wait

NSConditionLock is essentially NSCondition + Lock. The following is the underlying implementation of its swift,

As can be seen from the source code

Therefore, it can be verified that NSConditionLock calls the lock method of NSCondition at the bottom

condition matches the value of value