After iptables is enabled, the data message will pass through 5 checkpoints from entering the server to exiting 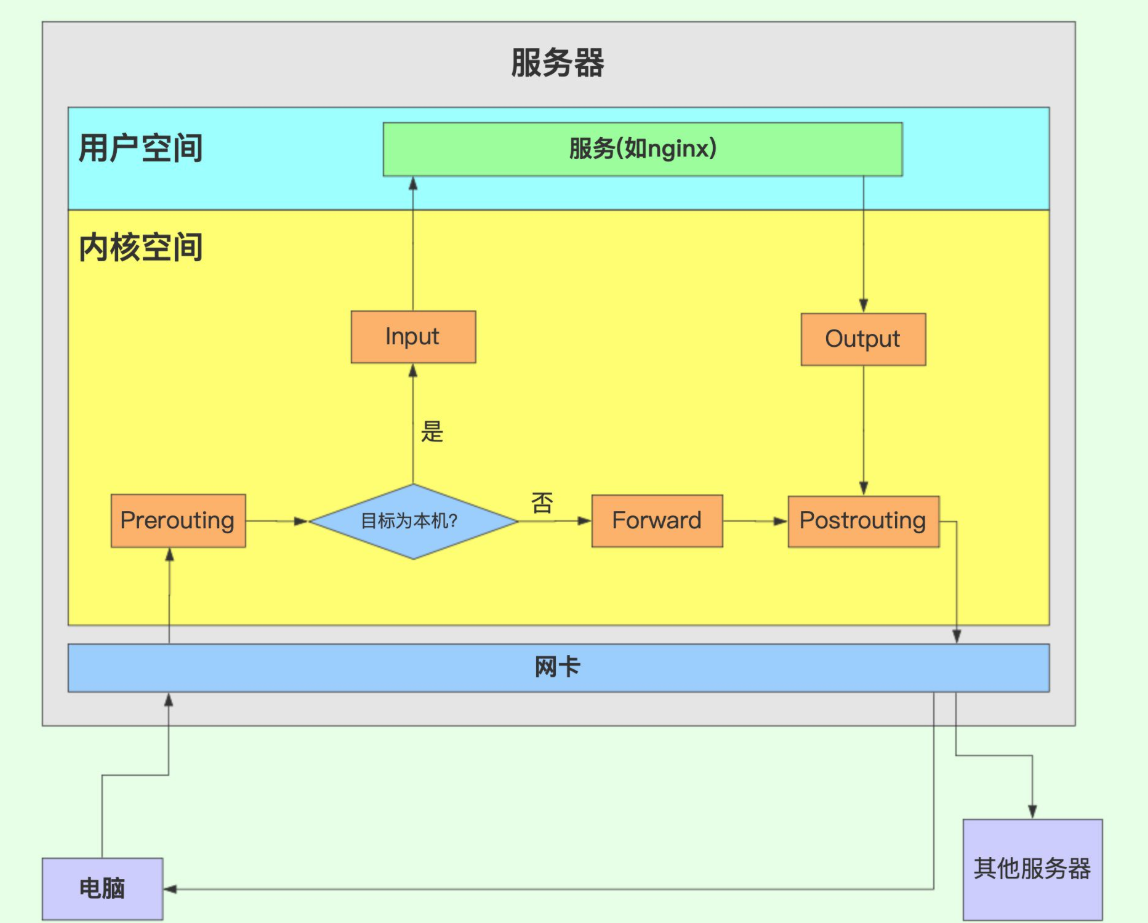 beyond the limits of the visible world

Although there are multiple rules in each chain, the functions (functions) of some rules are very similar. Multiple rules with the same functions together form a "table". iptables provides four "tables":
- * * filter table: * * it is mainly used to filter data packets and decide whether to release the data packets according to specific rules (such as DROP, ACCEPT, REJECT and LOG). The so-called firewall basically refers to the filtering rules on this table, corresponding to the kernel module iptables_filter；
– * * NAT table: * * network address translation, the network address translation function, is mainly used to modify the IP address, port number and other information of the packet (network address translation, such as SNAT, DNAT, MASQUERADE and REDIRECT). Packets belonging to a stream (data may be divided into multiple packets due to packet size constraints) will only pass through this table once. If the first packet is allowed to do NAT or Masqueraded, the remaining packets will automatically do the same operation, that is, the remaining packets will not pass through this table again. Corresponding kernel module iptables_nat；
- * * mangle table: * * disassemble the message, modify it, and reseal it. It is mainly used to modify the TOS(Type Of Service), TTL(Time To Live) of the packet and set the Mark mark for the packet to realize Qos(Quality Of Service) adjustment, policy routing and other applications. Due to the need for corresponding routing equipment support, Therefore, it is not widely used. Corresponding kernel module iptables_mangle；
– * * * raw table: * * is a new table added to iptables since version 1.2.9. It is mainly used to determine whether data packets are processed by the state tracking mechanism. When matching data packets, the rules of raw table shall take precedence over other tables, corresponding to the kernel module iptables_raw.
The firewall rules we finally define will be added to one of the four tables.
Linked list relation

The matching order of each table in each chain is: raw → mangle → nat → filter.

The file is saved in / etc/sysconfig/iptables