It's over. Why doesn't my business take effect?

We should write about affairs at ordinary times. We encountered a pit when writing affairs before, but it didn't take effect. Later, we checked and reviewed the failure scenarios of various affairs. We thought we might as well make a summary, so that we can have confidence in the next troubleshooting. First, let's review the relevant knowledge of transaction. Transaction refers to the smallest work unit of operation. As a separate and non cutting unit, the operation will either succeed or fail. Transactions have four characteristics (ACID):

Transactions are not only applicable to databases. We can extend this concept to other components, such as queue services or external system state. Therefore, "a series of data operation statements must complete or fail completely and leave the system in a consistent state"

Previously, we have deployed some demo projects and quickly built the environment with docker. This article is also based on the previous environment:

The normal transaction example includes two interfaces: one is to obtain the data of all users, and the other is to update the user data, which is actually the age of each user + 1. Let's throw an exception after the first operation to see the final result:

Get first http://localhost:8081/getUserList All users see:

When calling the update interface, the page throws an error:

The console also has an exception, which means divide by 0, exception:

Then we ask again http://localhost:8081/getUserList , you can see that the data is both 11, indicating that the data has not changed. After the first operation, the exception and rollback succeeded:

When is the transaction rolled back abnormally? Listen to me carefully:

1. The engine is not set correctly

We know that Mysql actually has the concept of a database engine. We can use show engines to view the data engines supported by Mysql:

We can use show variables like 'default_storage_engine 'from the default database engine, you can see that the default is InnoDB:

Let's see if InnoDB is also used in the data table we demonstrate. We can see that InnoDB is indeed used

What if we change the table engine to MyISAM? Try it. Here we only modify the data engine of the data table:

Then update. Not surprisingly, errors will still be reported. It seems that the errors are no different:

Conclusion: the transaction cannot take effect until it is set as an InnoDB engine.

2. The method cannot be private

The same final modification method, if annotated, will also report an error, because using final does not want to be rewritten:

Spring mainly uses radiation to obtain Bean annotation information, and then uses AOP based on dynamic proxy technology to encapsulate the whole transaction. In theory, I think there is no problem calling private method. Use method at the method level setAccessible(true); It's OK, but the spring team may think that the private method is an interface that developers are unwilling to disclose. There's no need to destroy the encapsulation, which can easily lead to confusion.

Is the Protected method OK? may not!

Next, in order to realize the magic change of the code structure, because the interface cannot be ported. If the interface is used, it is impossible to use the protected method, which will directly report an error, and must be used in the same package. We put the controller and service under the same package: 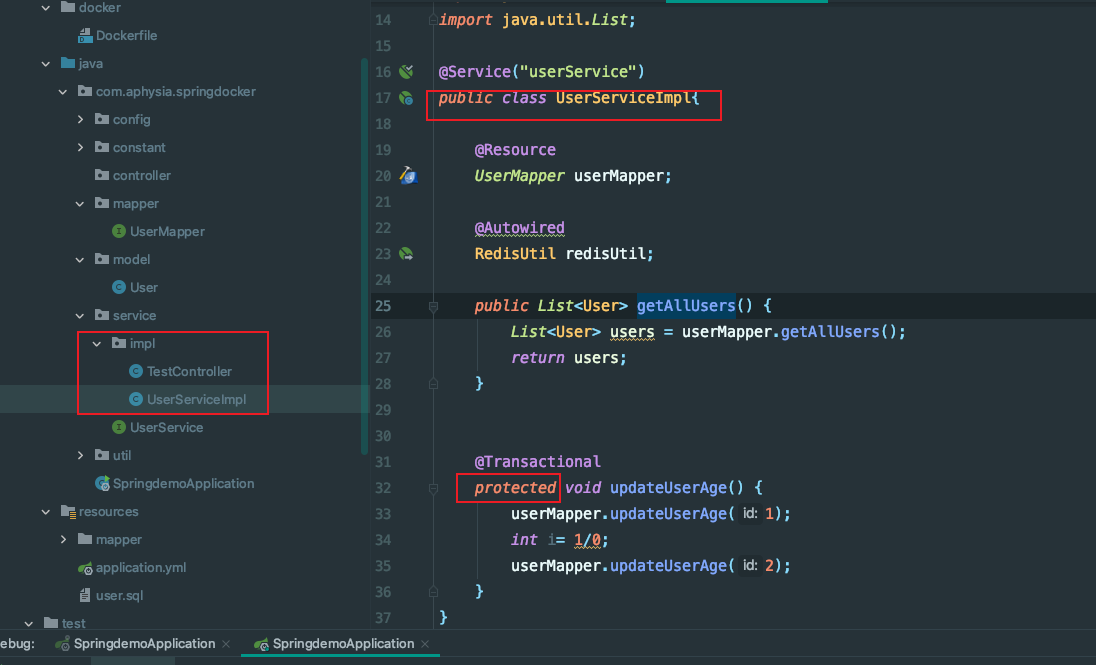 After the test, it is found that the transaction does not take effect. The result is still that one is updated and the other is not updated:

Conclusion: it must be used on public methods, not on private,final and static methods, otherwise it will not take effect.

3. Exceptions must be run-time exceptions

From the source code, we can also see that the rollbackOn(ex) method will judge whether the exception is a RuntimeException or an Error:

Exceptions are mainly divided into the following types:

All exceptions are Throwable, and Error is an Error message. Generally, the program has some uncontrollable errors, such as the absence of this file, memory overflow, and sudden IO Error. Under Exception, except RuntimeException, other exceptions are CheckException, that is, exceptions that can be handled. Java programs must handle this Exception when writing, otherwise compilation will not pass.

It is worth noting that @ Transactional can be used not only for methods, but also for classes, indicating that all public methods of this class will configure transactions.

5. Transaction methods cannot be called in the same class

For example, we change the service transaction method to:

After calling, it is found that the transaction is invalid, one is updated and the other is not updated:

Spring wraps the cut surface method and only intercepts the external calling method, but not the internal method.

Look at the source code: in fact, when we call the transaction method, we will enter the public object intercept (object proxy, method, object [] args, methodproxy, methodproxy) method of dynamicadisceptor (): 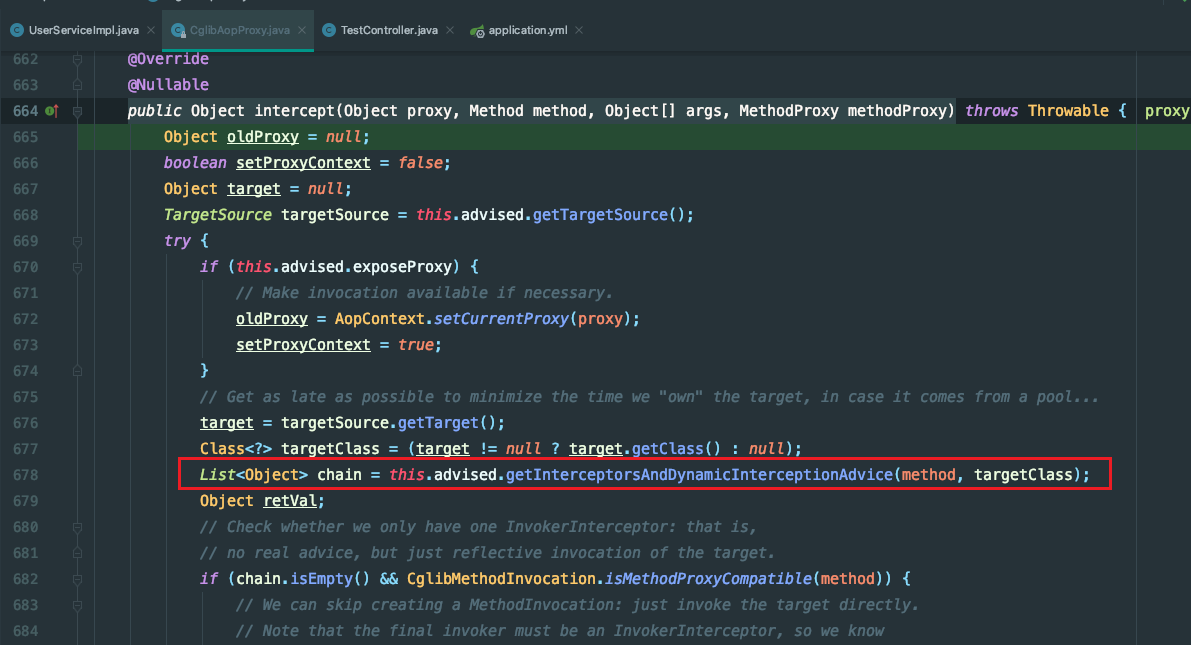 It calls advised support Getinterceptorsanddynamicinception advice(), here is the get call chain. The method userservice without @ Transactional annotation Testtransaction() can't get the proxy call chain at all. The method of the original class is called.

To proxy a method in spring, aop is used. An identifier must be used to identify which method or class needs to be proxied. Spring defines @ Transactional as the cut-off point. If we define this identifier, it will be proxied.

When is the time for agency?

Spring manages our beans in a unified way. The time of proxy is naturally the process of creating beans. See which class carries this ID and generate proxy objects.

The SpringTransactionAnnotationParser class has a method to judge the TransactionAttribute annotation:

Because different threads use different sqlsessions, which is equivalent to another connection, the same transaction will not be used at all:

7. Pay attention to the rational use of transaction nesting

First, there is a communication mechanism for transactions:

The following error is thrown:

How to deal with it?

Sometimes, we not only operate our own database, but also consider external requests, such as synchronizing data. If synchronization fails, we need to roll back our state. In this scenario, we must consider whether the network request will make an error, how to deal with the error, and which error code will succeed.

If the network times out, it actually succeeds, but we judge it as unsuccessful and rollback it, which may lead to inconsistent data. The callee needs to support retry. When retrying, it needs to support idempotent. Multiple calls save the same state. Although the whole main process is very simple, there are still many details.

The transaction is wrapped in the complexity of Spring, and many things may have deep source code. When we use it, we should pay attention to simulate and test whether the call can be rolled back normally. It can't be taken for granted that people will make mistakes. Many times, the black box test simply tests this abnormal data. If there is no normal rollback, it needs to be handled manually later. Considering the problem of synchronization between systems, It will cause a lot of unnecessary trouble. The process of manually changing the database must go. 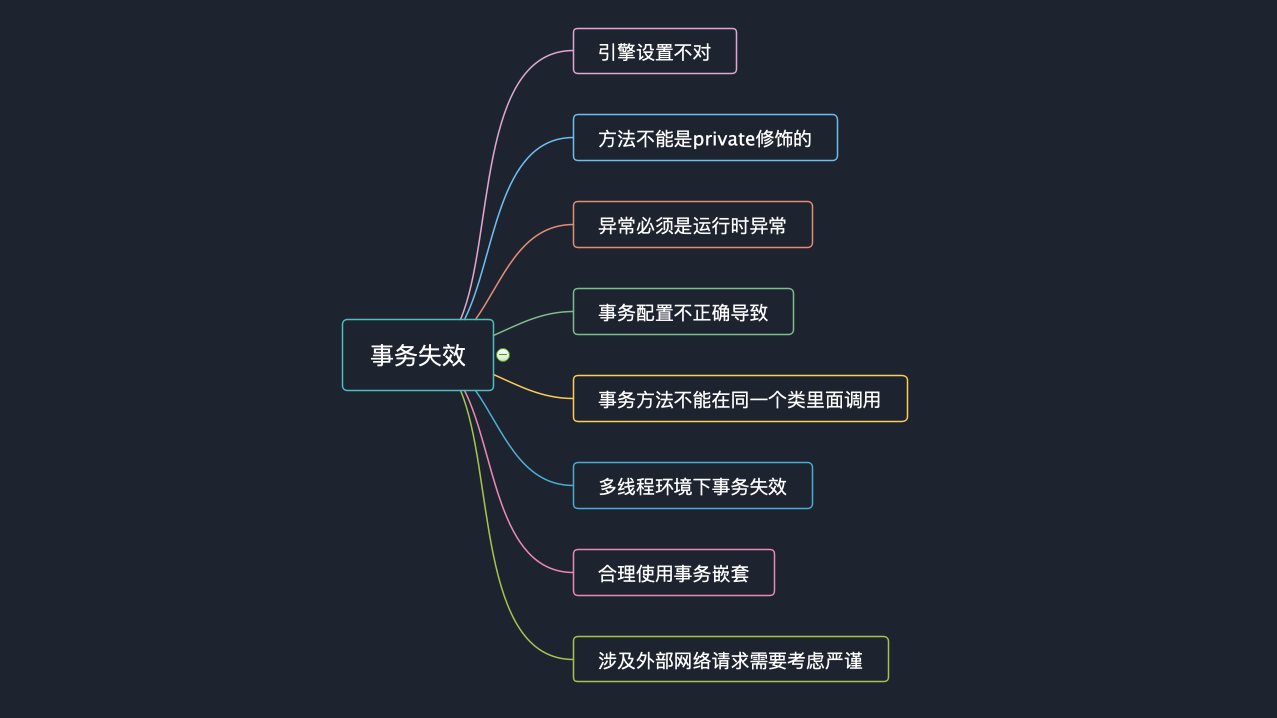 [about the author]:
Qin Huai, official account [Qinhuai grocery store] the author, the road of technology is not at the moment. The mountain is high and the river is long. Even if it is slow, it will not stop. His personal writing direction: Java source code analysis, JDBC, Mybatis, Spring, redis, distributed, sword finger Offer, LeetCode, etc. He carefully writes every article. He doesn't like the title party and fancy. He mostly writes a series of articles, which can't guarantee that I write completely correctly Yes, but I guarantee that what I write has been practiced or searched for information. Please correct any omissions or mistakes.