IO technology is an extremely complex module in JDK. One of the key reasons for its complexity is the correlation between IO operation and system kernel. In addition, network programming and file management all rely on Io technology, which is a programming difficulty. To understand IO flow as a whole, start with Linux operating system.

Linux is used to distinguish users, which is a basic common sense. Its bottom layer also distinguishes between users and kernel modules:

The common sense user space permissions are much weaker than the kernel space operation permissions, which involves the interaction between the user and the kernel modules. At this time, if the application deployed on the service needs to request system resources, the interaction is more complex:

The user space itself cannot directly issue scheduling instructions to the system. It must pass through the kernel. For the operation of data in the kernel, it also needs to be copied to the user space first. This isolation mechanism can effectively protect the security and stability of the system.

You can dynamically view various data analysis through the Top command, and the status of resources occupied by the process:

wa indicator is one of the core items of monitoring in large-scale document task flow.

At this time, look at the flow in figure [1] above. When the application side initiates an IO operation request, the request flows along each node on the link. There are two core concepts:

This is what is often said in the file stream: [synchronous / asynchronous] IO and [blocking / non blocking] io. See the details below.

The interaction mode between the user thread and the kernel. The request of the application side is processed by one thread. In the whole process, the accept and read methods will be blocked until the whole action is completed: 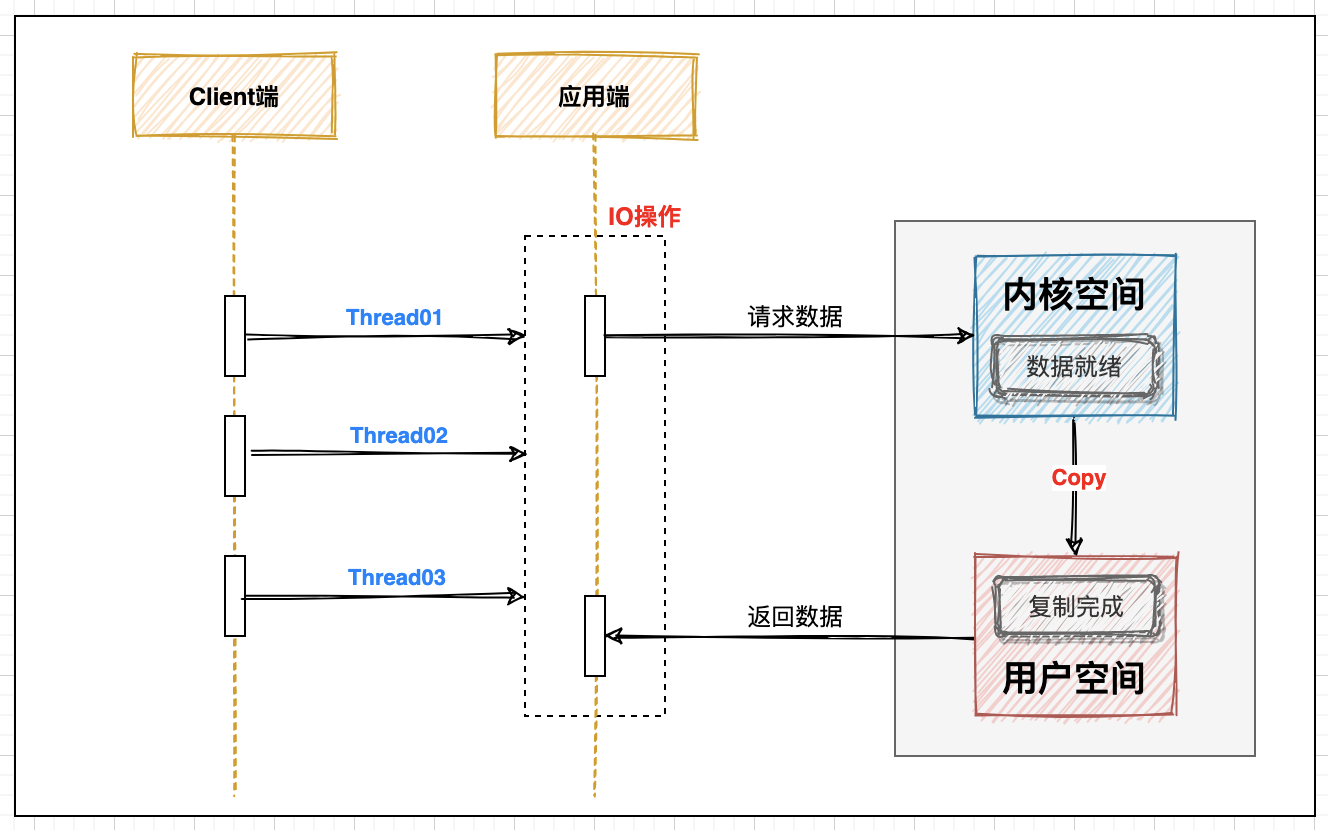 In the conventional CS architecture mode, this is the basic process of an IO operation. In this mode, in the scenario of high concurrency, the request response of the client will have serious performance problems and occupy too many resources.

Based on synchronous blocking IO, the current thread will not wait for data to be ready until replication is completed: 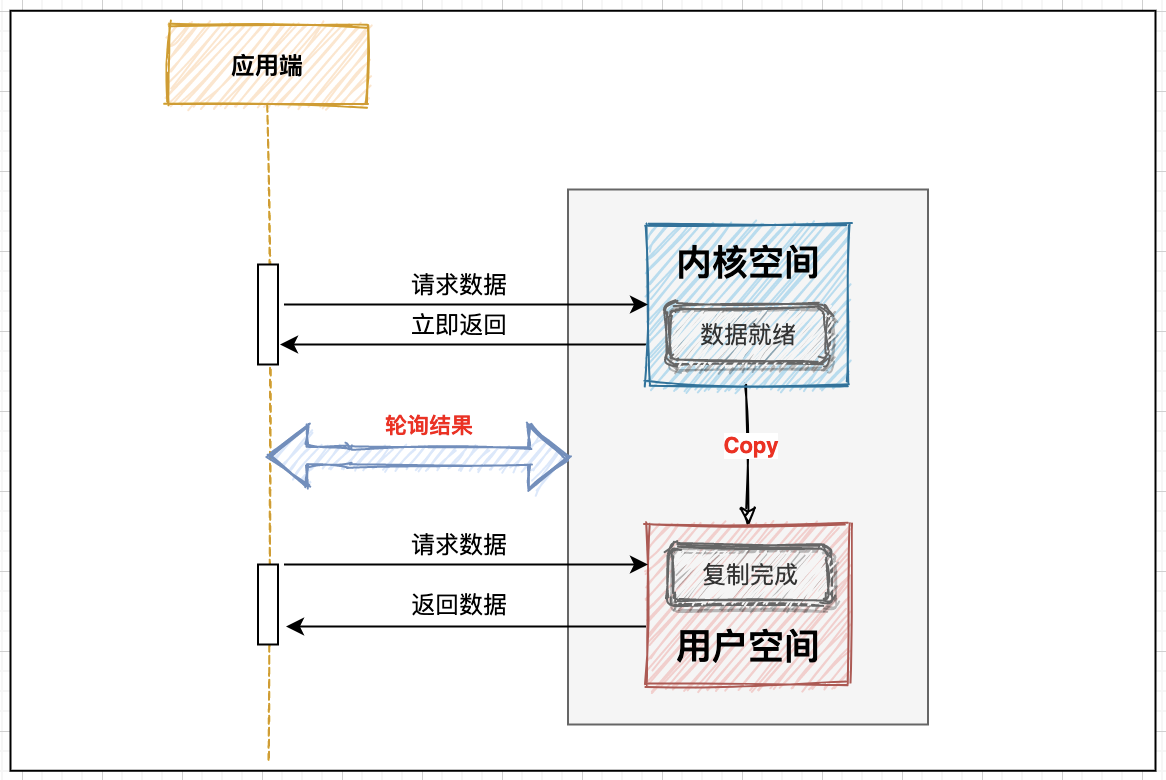 The thread will return immediately after the request, and will continue to poll until it gets the data. The defect of this mode is also obvious. If the data is ready, notify the thread to complete the follow-up action, which can save a lot of intermediate interaction.

In the asynchronous mode, the blocking mechanism is completely abandoned and the process is interactive in segments, which is very similar to the conventional third-party docking mode. When a local service requests a third-party service, if the request process takes a lot of time, it will be executed asynchronously. The third party will call back for the first time to confirm that the request can be executed; The second callback is the result of push processing. This idea can greatly improve the performance and save resources when dealing with complex problems: 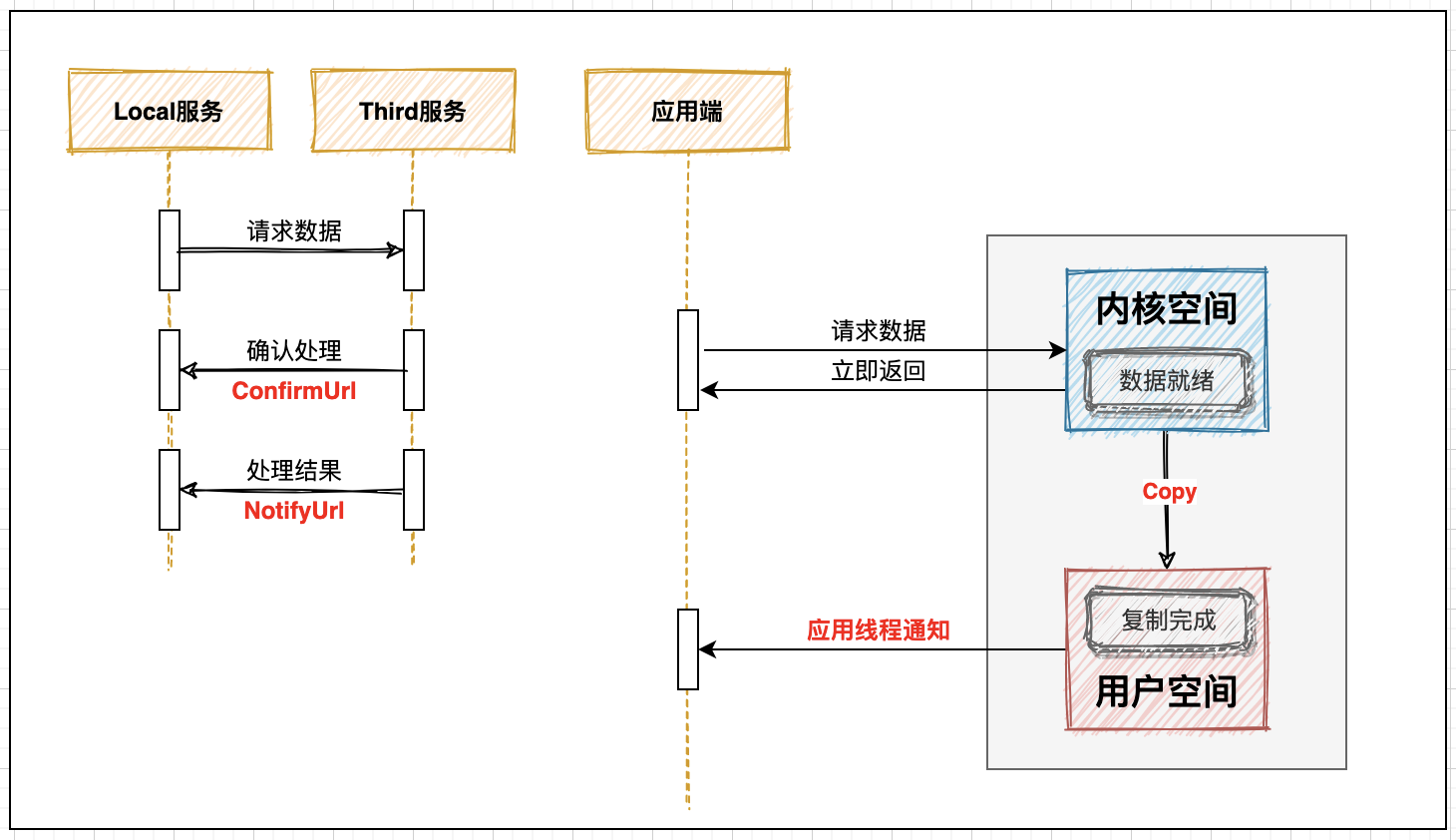 Asynchronous mode can greatly improve the performance. Of course, its corresponding processing mechanism is more complex. The iteration and optimization of the program are endless. The IO flow mode is optimized again in NIO mode.

Note: File does not operate the data content carried by the File. The File content is called data, and the File's own information is called metadata.

The above case uses the basic structure and common methods (read, judge, create and delete) in the File class. The JDK source code is constantly updated and iterated. Judging the basic functions of the class through the class constructor, method and annotation is a necessary ability for developers. 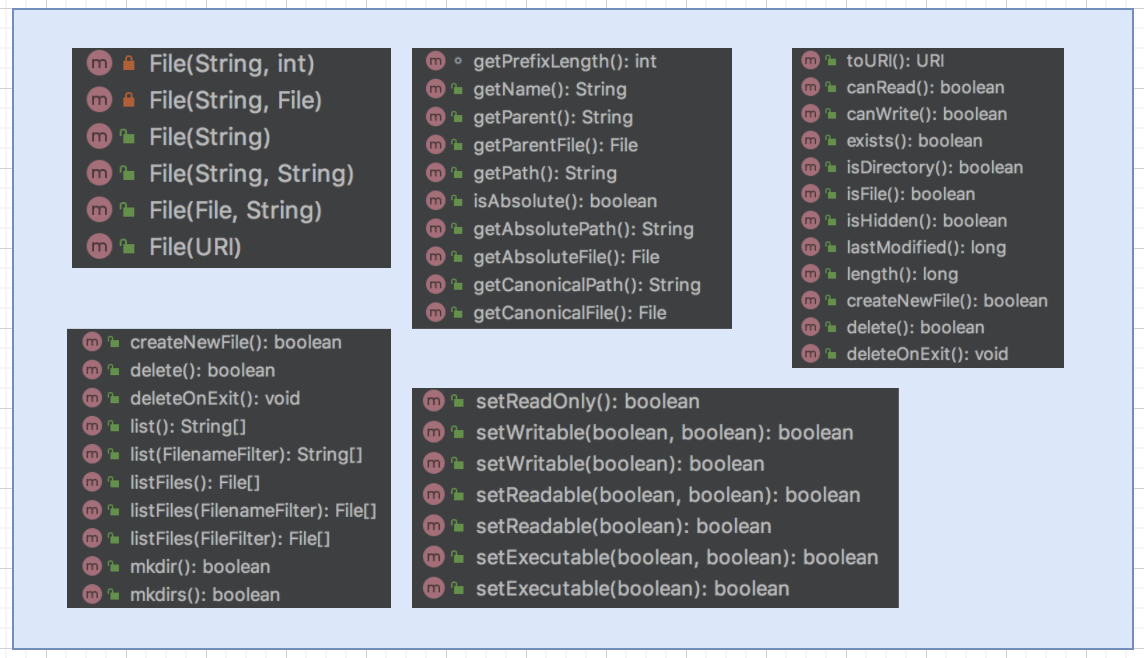 The File class lacks two key information descriptions: type and code. If you often develop the requirements of the File module, you know that these are two extremely complex points, which are prone to problems. Let's see how to deal with them from the perspective of actual development.

As shown in the figure, three basic forms of [file, stream and data] conversion will be involved in the conventional file flow task: 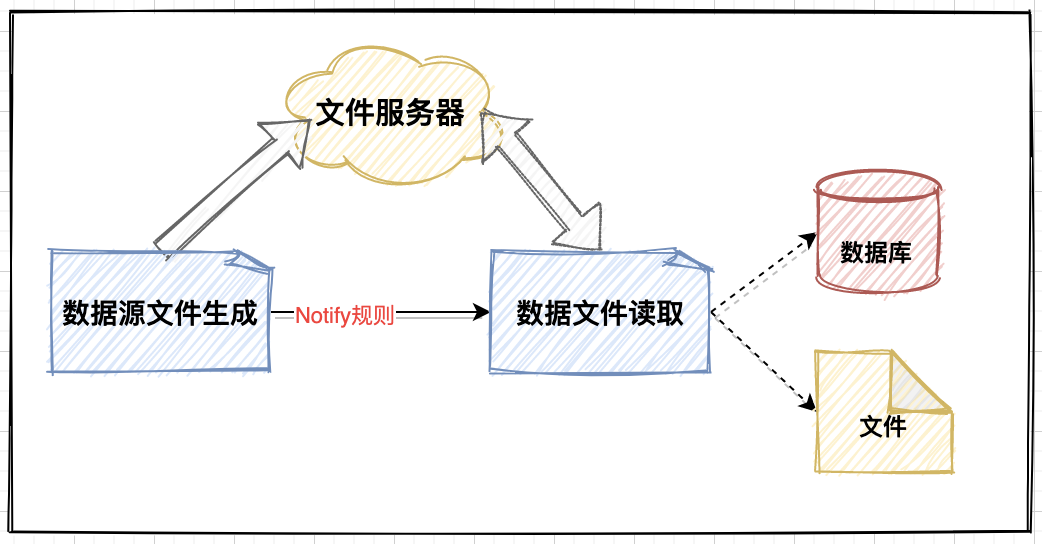 Obviously, no node can adapt to all file processing strategies, such as type and coding. In the face of problems in complex scenarios, rule constraints are a common solution strategy, that is, things within the agreed rules can be handled.

In the above process, the data subject description when the source file node notifies the business node:

The whole process is encapsulated as a task, that is, task batch, file information, service library table routing, etc. of course, these information can also be directly marked on the file naming strategy, and the processing methods are similar:

Based on the information described by the subject, it can also be transformed into naming rules: Naming Strategy: numbering_ Compress_ Excel_ Code_ Storehouse_ In this way, non-conforming files are directly excluded during business processing, so as to reduce the data problems caused by file exceptions.

From different perspectives, flow can be divided into many modes:

There are many modes of IO flow, and the corresponding API design is also very complex. Generally, complex APIs should grasp the core interface and common implementation classes and principles.

The advantages of buffer mode are very obvious. It ensures the high efficiency of the read-write process and is executed separately from the data filling process. It is a concrete implementation of buffer logic in BufferedInputStream and BufferedReader classes.

Byte stream application scenario: data is the file itself, such as picture, video, audio, etc. 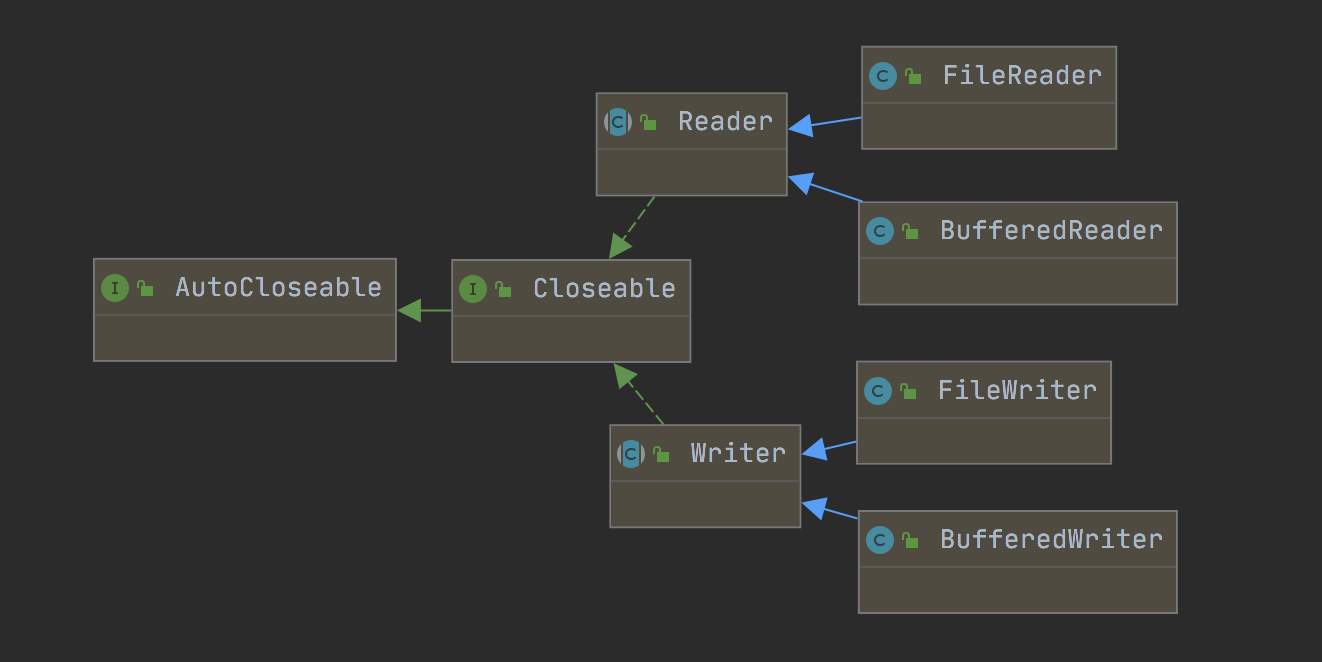 The root cause of garbled code is the different coding types used in the two stages of coding and decoding.

Note: the member object of reference type must also be serializable, otherwise NotSerializableException will be thrown.

NIO (nonblocking IO), a data block oriented processing mechanism and a synchronous non blocking model. A single thread on the server can process multiple client requests, which greatly improves the processing speed of IO streams. There are three core components:

The above case is only the most basic file replication capability of NIO. In network communication, NIO mode has a wide space to play.

The single thread of the server can process multiple client requests and check whether there are IO requests by polling the multiplexer. In this way, the concurrency of the server is greatly improved and the resource consumption is significantly reduced.

SelectionKey binds the association between Selector and Channel, and can obtain the Channel collection in ready state.

The IO stream is the same as the series of articles: