1. What is a Java exception

Anomalies in our life are some unusual and abnormal phenomena. In Java, exceptions refer to some errors in the program, that is, the program does not go in the direction we want. For example: the data passed in by a module we wrote does not meet your requirements; You access online services, but your network connection fails; The data you query in the database is empty; The file you accessed does not exist or the format of the file is different from what you think; When the program is running, the JVM makes an error or runs out of memory space, etc. These exceptions occur during program operation and interrupt the normal instruction flow of the executing program.

In Java, all exceptions are objects. They have one thing in common. The parent class is Throwable. The inheritance diagram is as follows 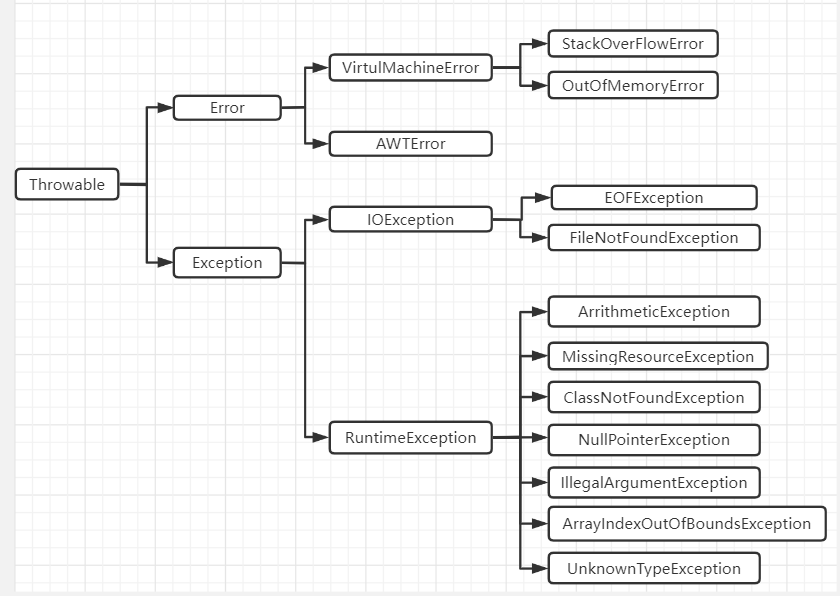 Throwable is the ancestor of all Exception classes. It includes two important subclasses: Error and Exception.

The Error class and its subclasses are used to describe internal errors and resource exhaustion errors in the Java running system. Such errors cannot be handled by the program and are more serious. The occurrence of this Error is generally independent of the coder, and the JVM generally selects thread termination when this Error occurs, because this situation is outside the processing scope of the program, which can not be handled only by the program itself, and the Java program will not catch and throw the Error exception.

Exception exception can be caught to make the program continue to execute. It is an exception that the program itself can handle, also known as non fatal exception.

According to the cause of the error, it can be divided into runtime exception and checkedexception

People feel bad when they make mistakes. If a user loses user data during running the program due to program errors or the influence of some external environment, the user may no longer use the program. In order to avoid such things, at least the following points should be done:

For exception situations, such as error input that may cause program crash, Java uses an error capture mechanism called exception handling.

In Java applications, the exception handling mechanism is to throw exceptions and catch exceptions.

If no exception operation is caught, once an exception occurs, the console will print the exception type and its stack trace. As follows:

So when we debug the program, we can check the stack trace to find out the specific location of our error!

The following is a simple try..catch statement:

Whether or not an exception is caught, the statement in finally will be executed. The general writing method is as follows (take the file input stream as an example):

The following example gives you a deep impression of the try..catch..finally statement:

During development, we will encounter many exceptions that cannot be described by standard Exception classes. In this case, it is important to create your own Exception class. When creating, we only need to create a class or subclass that inherits Exception. Generally, a custom Exception class contains two constructors, one is the default constructor, and the other is the constructor containing detailed information. For example:

Next, it's the same as throwing an exception before.