In addition, the thread pool also provides many adjustable parameters and extensible interfaces to meet the needs of different situations. We can use the more convenient factory method of Executors to create different types of thread pools, or customize the thread pool ourselves. 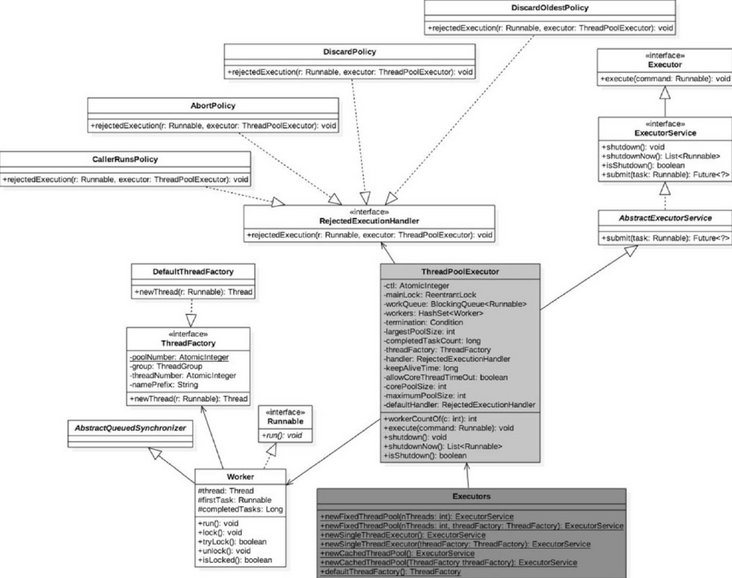 As shown in the above class diagram, Executors is a tool class that provides a variety of static methods and provides different thread pool instances according to our choices.

ThreadPoolExecutor inherits the AbstractExecutorService abstract class. In ThreadPoolExecutor, the member variable ctl is an atomic variable of Integer, which is used to record the status of the thread pool and the number of threads in the thread. It is similar to ReentrantReadWriteLock using a variable to save the two kinds of information.

Assuming that the Integer type is a 32-bit binary representation, the upper 3 bits represent the status of the thread pool, and the last 29 represents the number of threads in the thread pool.

Get the upper 3 bits and the running status

Get the lower 29 bits and the number of threads

The meaning of thread pool status is as follows:

The state transition of thread pool is as follows:

Thread pool parameters are as follows:

As shown in the ThreadPoolExecutor class diagram above, mainLock is an exclusive lock used to control the atomicity of new Worker thread operations. termination is the condition queue corresponding to the lock. It is used to store blocked threads when a thread calls awaitTermination.

The worker class inherits the AQS and Runnable interfaces and is an object that specifically carries tasks. Worker inherits AQS and implements a simple non reentrant exclusive lock. state = 0 indicates that the lock has not been acquired, state = 1 indicates that the lock has been acquired, state = -1 is the default state when creating worker, and the state is set to - 1 when creating to avoid the thread being interrupted before running runWorker method. The variable firstTask records the first task executed by the worker thread, and thread is the thread that specifically executes the task.

The main function of the execute method is to submit the task command to the thread pool for execution. 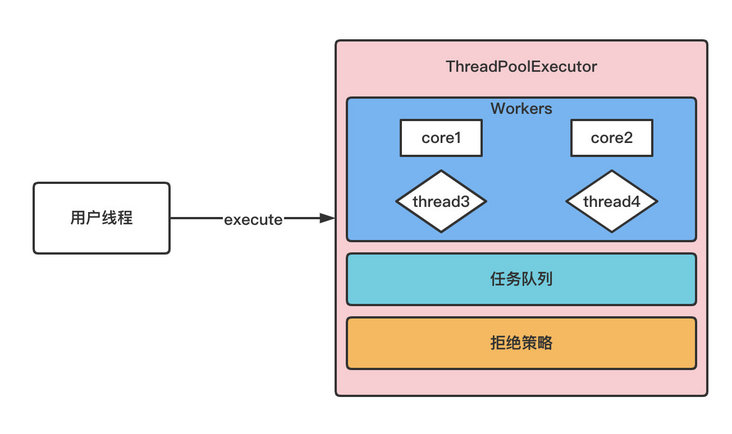 The specific codes are as follows:

If code (4) fails to add a task, it indicates that the queue is full. Then execute code (5) to try to add new threads, that is, thread3 and thread4 threads in the above figure to execute the task. If the current number of thread pools > maximumpoolsize, execute the rejection policy.

Let's next look at the addWorker method:

Firstly, it is clear that the purpose of the first part of double loop is to add the number of threads through CAS operation. In the second part, the task is added to workers safely through ReentrantLock, and then the task is started.

First look at the first part of the code (1).

The function of inner loop in code (2) is to use CAS operation to increase the number of threads.

When code (8) is executed, it indicates that the number of threads has been successfully increased through CAS. Now the task has not started to execute, so this part of code adds workers to the work set workers through global lock control.

After the user thread is submitted to the thread pool, it is executed by the Worker. The following is the constructor of the Worker.

In runWorker code, the unlock method will be called when running code (1), which sets the status to 0, so calling shutdown now will interrupt the Worker thread.

The cleaning work code is as follows:

In the above code, the code (1.1) counts the number of tasks completed by the thread pool, and adds a global lock before the statistics. Add the tasks completed in the current working thread to the global counter, and then delete the current Worker from the working set.

Code (1.3) determines whether the number of threads in the current thread pool is less than the number of core threads. If so, add a new thread.

After the shutdown method is called, the thread pool will not accept new tasks, but the tasks in the work queue still need to be executed. This method will return immediately without waiting for the queue task to complete.

First, see whether the thread currently called has permission to close the thread.

Then the code of code (2) is as follows. If the current thread pool state > = SHUTDOWN, it will be returned directly; otherwise, it will be set to SHUTDOWN state.

After calling the shutdown now method, the thread pool will no longer accept new tasks, and will discard the tasks in the work queue. The executing tasks will be interrupted, and the method will return immediately without waiting for the execution of the activated tasks. The return value is the task list discarded in the queue at this time.

It should be noted that all threads interrupted include idle threads and threads executing tasks.

When a thread calls the awaitTermination method, the current thread will be blocked and will not return until the thread pool state changes to TERMINATED or the waiting time expires.

First obtain the exclusive lock, and then judge whether the current thread pool state is at least TERMINATED within the infinite loop. If so, it will be returned directly. Otherwise, it means that there are still threads executing in the current thread pool. It depends on whether the set timeout nanos is less than 0. If it is less than 0, it means that there is no need to wait, so it will be returned directly, If the waiting time of the calling process variable is greater than the expected time of terminals, the process will change to the waiting time of terminals.