Like the program counter, the Java virtual machine stack is also thread private, and its life cycle is the same as that of the thread

The method area is a memory area shared by each thread. It is used to store type information, constants, static variables, code cache compiled by the instant compiler and other data that have been loaded by the virtual machine.

If the method area cannot meet the new memory allocation requirements, an OutOfM emoryError exception will be thrown.

Assuming that the memory in the Java heap is absolutely regular, all used memory is placed on one side, the free memory is placed on the other side, and a pointer is placed in the middle as the indicator of the dividing point, the allocated memory is only to move the pointer to the free space for a distance equal to the size of the object. This allocation method is called "pointer collision"

If the memory in the Java heap is not regular, and the used memory and free memory are staggered with each other, then
There is no simple pointer collision, and the virtual machine must maintain a list and remember
Record which memory blocks are available. When allocating, find a large enough space in the list, allocate it to the object instance, and update the records on the list. This allocation method is called "free list"

Java programs will manipulate specific objects on the heap through the reference data on the stack.

If handle access is used, a piece of memory may be divided in the Java heap as a handle pool. The reference stores the handle address of the object, and the handle contains the specific address information of the object instance data and type data 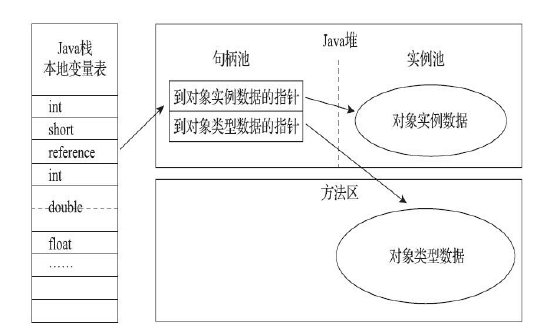 If direct pointer access is used, the memory layout of the objects in the Java heap must consider how to place the related data of the access type
Information. The direct address stored in reference is the object address. If you only access the object itself, you don't need another indirect access 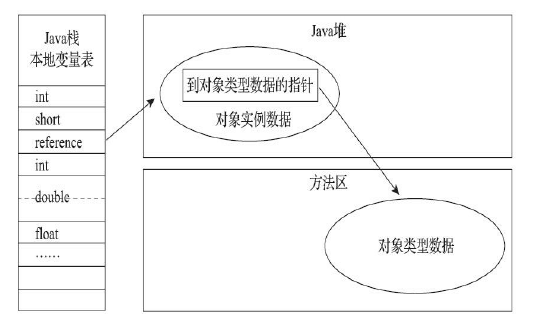 As the number of objects increases, a memory overflow exception will occur when the total capacity reaches the maximum heap capacity limit

Analyze the heap Dump snapshot from Dump through the memory image analysis tool (such as Eclipse Memory Analyzer).

The capacity of direct memory can be specified by the - XX: M axDirectMemorySize parameter. If it is not specified, it defaults to the maximum value of Java heap (specified by - Xmx)