For Java multithreading, in fact, it has been some scattered learning. Multithreading is often asked in the interview. I really want to summarize this certification this time, and I really don't want to fall in this field. According to "Java high concurrent programming details" a book to learn and summarize.

Let's start with a simple example

After running, use JConsole to connect to the specified JVM process. The results are as follows 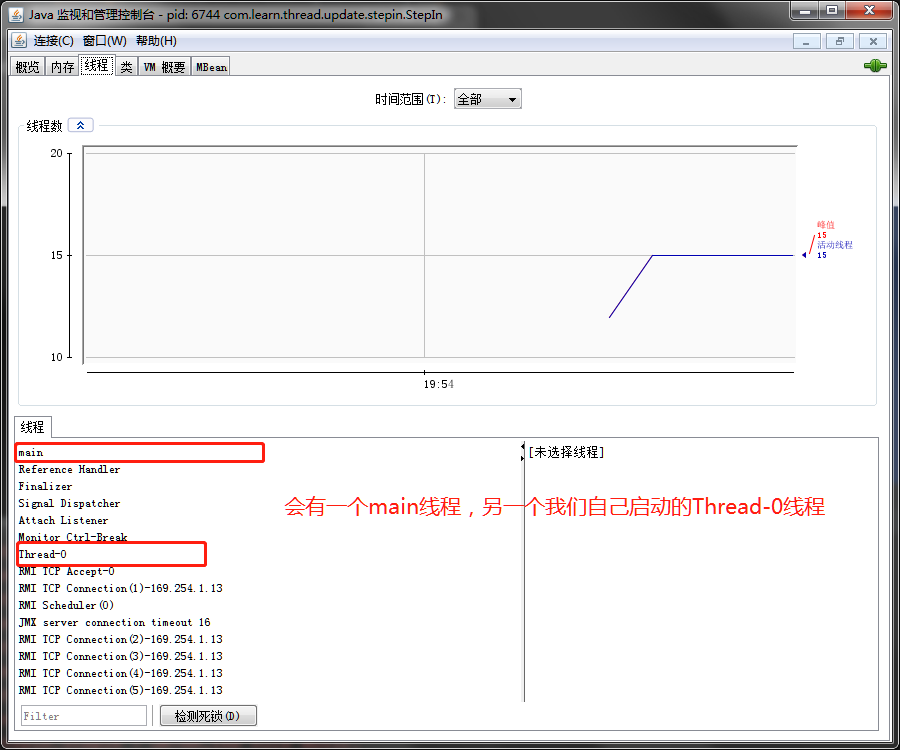 It is normal to see that there will be a main thread and Thread-0 thread started by itself, as well as other daemons (what is daemons will be discussed later). Each thread has its own local variable table, program counter, and life cycle.

Does the start method of Thread mean that the Thread has started executing? The life cycle of a Thread can be roughly divided into the following five main stages, as shown in the figure below

The life cycle of a thread can be roughly divided into five main stages: NEW, RUNNABLE, RUNNING, BLOCKED, TERMINATED.

When a Thread object is created through new Thread(), no Thread start operation is performed. At this time, the Thread is not in the execution state. Because start is not called, the Thread can only be in the NEW state.

By the way, a thread cannot enter the TERMINATED state directly from the RUNNABLE state.

Only when the CPU selects this thread can it really enter the RUNNING state, and then it can actually execute its own code logic. A thread in RUNNING state may send the following transitions

Enter the TERMINATED state directly from RUNNING, such as calling stop method (although not recommended)

Enter the BLOCKED state from the RUNNING state, such as calling the sleep or wait method, or performing a BLOCKED IO state to obtain a lock resource,

Enter the RUNNING state into the RUNNING state, for example, the scheduler polling of the CPU causes the thread to give up execution, or the CPU's execution right is given up due to the active call of the yield method.

From RUNNING to BLOCKED, we have already introduced it. The BLOCKED state can be switched to other states as follows:

1. Enter the TERMINATED state directly, such as calling the stop method

2. Directly enter the RUNNABLE state, and the operation of thread blocking ends, such as reading the desired byte, or completing the sleep for a specified time, or acquiring a lock resource, or being interrupted during the blocking process (such as other threads calling interrupt method).

This is the final state of a thread, and there will be no switching. Thread running error or JVM Crash will cause all threads to enter this state directly

Why there should be a Runnable interface

In fact, there are two reasons: one is that if a class already inherits a class, it is difficult to inherit the Thread class, so there is a Runnable interface, but there is another reason. This reason needs to start from the following program, which we will discuss later.

It can be seen that the start source code is relatively simple, and the core is nothing more than calling a local method of start0(). But when we inherit Thread, we copy the run method instead of the start method? In fact, we can see this from the comments: Causes this thread to begin execution; the Java Virtual Machine calls the run method of this thread.

2. You cannot start a thread twice, otherwise the IllegalThreadStateException will appear.

3, group.add(this); after the thread starts, it will be added to a thread group.

From the template method

An example of a simple template method

There is an abstract class

Now back to our previous question, what's the difference between the two? Is there anything else worth considering besides convenient inheritance? Let's start with the run method in the Thread class

Take a look at one of the Thread constructors

You can see that the Thread constructor here takes a Runnable parameter.

Before, there was a saying that there were several ways to create threads. Some people answered that there are two ways: one is to implement the Runnable interface, the other is to inherit the Thread class. At least for now, it seems to be a little superficial. In the previous start method, we can see that run is just a template method, and the local method start0 calls back the run method of the corresponding subclass. In fact, the two ways are the same. In essence, the only way to create a Thread is to construct a Thread class. There are two ways to create a Thread execution unit: one is to rewrite the run method of the Thread, the other is to implement the run method of the Runnable interface, and the second method uses the Runnab instance as the Thread construction parameter.

After the Runnable interface is implemented, it will be much better. Index can share index to a certain extent without static decoration, which can separate business data and business operation. However, if the index value is too large, there will be thread safety problems.