The agent is in English P r o x y Proxy Proxy translated. The agents we have seen in life are probably the most common ones who sell mask in the circle of friends.

They take the goods from the manufacturer, publicize them in the circle of friends, and then sell them to acquaintances. 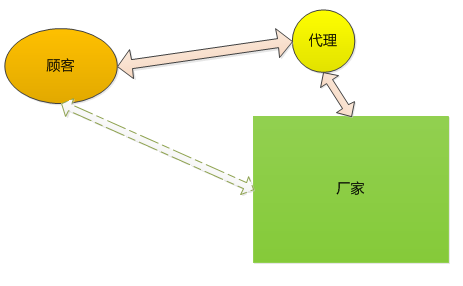 Reasonably speaking, customers can buy products directly from manufacturers, but in real life, there are few such sales models. Generally, the manufacturer entrusts the agent for sales, and the customer deals with the agent rather than directly associated with the actual producer of the product.

Therefore, the agent has a taste of middleman.

Agent pattern is a common design pattern in object-oriented programming.

This is a common UML diagram of a common agent pattern.

The following points should be noted:

If it's difficult to understand, I'll illustrate it with examples. It is worth noting that agents can be divided into static agents and dynamic agents.

When we usually go to the cinema to see a film, do we often put advertisements at the beginning of the film?

The film is entrusted by the film company to the cinema for broadcasting, but the cinema can produce some economic benefits when playing the film, such as selling popcorn and coke, and then play some advertisements at the beginning and end of the film.

Now use the code to simulate.

(1) First of all, there must be an interface. The general interface is the basis for the implementation of proxy mode. This interface is named Movie, which represents the ability of Movie playback.

(3) This represents a real film. It implements the Movie interface. When the play() method is called, the Movie starts playing. What about Proxy proxy?

(4) Cinema is a Proxy object that has a play() method. However, when the play() method is called, it does some related interest processing, that is, advertising. Now, let's write the test code.

Then observe the results:

The above describes the content of static proxy. Why is it called static? Because its type is predetermined, such as Cinema in the above code.

Since it is an agent, its function and purpose are no different from that of a static agent. The only difference is the difference between dynamic and static.

So what is the dynamic representation of dynamic agents?

In the code in the previous section, Cinema class is an agent. We need to write code manually to make Cinema implement the Movie interface. In the dynamic agent, we can let the program automatically create an agent implementing the Movie interface in memory when running without defining Cinema class. This is why it is called dynamic.

Maybe the concept is more abstract. Now give an example to illustrate the situation.

Suppose there is a large shopping mall with many counters and one counter selling Maotai liquor. We simulate the code.

(1) SellWine is an interface. You can understand it as a license to sell wine. We also need a counter to sell wine.

(2) Then create a class Maotai Jiu. Yes, it means Maotai.

Here, we come into contact with a new concept. It doesn't matter. Let's leave it alone and see the results first.

See, I didn't implement a proxy class for the SellWine interface like a static proxy, but it still implements the same functions in the end. The difference is the reason why the dynamic proxy discussed earlier is so-called "dynamic".

Relax. Let's start with the grammar. The grammar is very simple.

Dynamic code involves a very important class Proxy. It is through the static method newProxyInstance of Proxy that the Proxy is dynamically created.

The meaning of its three parameters is explained below.

Beginners should be unfamiliar with InvocationHandler. I'll talk about it right away.

InvocationHandler is just an invoke() method, which determines how to handle the method calls passed by the agent.

GuitaiA is actually the place where wine is sold.

Now, we increase the difficulty. We want to sell not only Maotai liquor, but also Wuliangye.

The Wuliangye class also implements the SellWine interface, indicating that it also has a license to sell wine and also sells it on GuitaiA.

Let's look at the results:

Some students may ask that they have learned the knowledge of agents, but what is the use of them?

The main function is to enhance the function without modifying the source code of the proxy object.

This is often seen in AOP aspect oriented programming.

In the software industry, AOP is the abbreviation of Aspect Oriented Programming, which means: Aspect Oriented Programming, a technology to realize the unified maintenance of program functions through precompile and runtime dynamic agent. AOP is the continuation of OOP, a hot spot in software development, an important content in Spring framework, and a derivative paradigm of functional programming. AOP can isolate each part of business logic, reduce the coupling between each part of business logic, improve the reusability of program, and improve the efficiency of development.

The above reference is Baidu Encyclopedia's explanation of AOP. As for how to log functions and performance statistics through agents, you can refer to the relevant source code of AOP and think about it carefully.

Like the notes, many students may wonder when I use an agent?

It depends on what you want to do. You've learned the grammar. The rest depends on the business requirements. It is suitable for the framework to realize logging function.

At this point, the static agent and dynamic agent are finished.