A JavaScript library, or library, is an encapsulated collection of specific methods and functions. To understand the library from the perspective of encapsulating a large number of functions, it is in this library that many predefined functions are encapsulated, such as animation, hide and show, such as obtaining elements.

Simple understanding: it is a js file that encapsulates our native js code and stores it in it. In this way, we can use these encapsulated functions quickly and efficiently.

For example, jQuery is to quickly and easily operate DOM, which is basically functions (Methods).

In addition, the understanding of several concepts:

The general overview of jQuery is as follows:

1x: compatible with lower version browsers such as IE 678, and the official website will not be updated

2x: incompatible with IE 678 and other lower version browsers, and the official website will not be updated

3x: it is incompatible with IE 678 and other lower version browsers. It is the version mainly updated and maintained by the official

There are two common entry functions in jQuery:

The elements obtained by using jQuery method are different from those obtained by native JS. The summary is as follows:

Only jQuery objects can use the jQuery method, and DOM objects use the native JavaScirpt method.

There are many ways for native JS to obtain elements, which are very complex, and the compatibility is inconsistent. Therefore, jQuery encapsulates us to make the acquisition of elements unified.

The basic selector is shown in the following figure:

The selector is shown in the figure below:

Filter selector, as the name suggests, is to select the one that meets the conditions among all options for filter selection. Common are as follows:

Understanding: filter selector to filter from a collection. 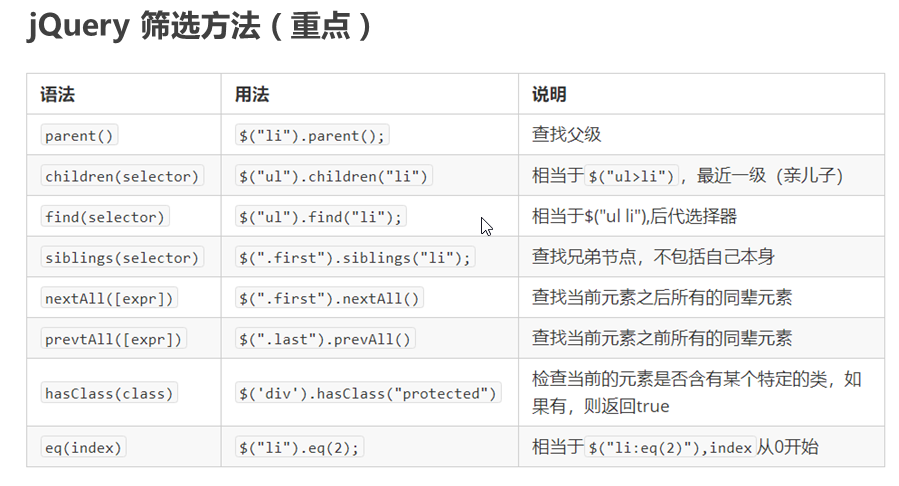 In the above methods, the parameters of children, find and sliblings are strings, representing selectors

Understanding: why do children have parameters?

For example, there are two p's and two a's under Div. if you want to get the sons named P, you can get them through $('div '). children('p')

Note: why is the jquery object a pseudo array because of implicit iteration

1. Core principle: when the mouse passes a small li in the box on the left, the corresponding pictures in the box in the content area will be displayed, and the other pictures will be hidden.

3.jQuery gets the index number $(this).index() of the current element

4. The corresponding picture in the middle can be selected by eq(index) method

jQuery can use css methods to modify simple element styles; You can also manipulate classes to modify multiple styles.

The function is the same as the previous classList. You can manipulate the class style. Pay attention not to add points to the parameters in the operation class.

There are three common methods for setting class styles:

1. Click the li in the upper part to add the current class to the current li and remove the other classes.

2. Click to get the index number of the current li

3. Display the items in the corresponding index number in the lower part and hide the other items

jQuery encapsulates many animation effects. The most common are as follows:

There are three common methods to show and hide Animation: show() / hide() / toggle();

1.5.2. Sliding in and out (sliding door, height animation)

There are three common methods for sliding in and out animation: slideDown() / slideUp() / slideToggle();

1.5.3 fade in and fade out (transparency animation)

There are four common methods to fade in and out animation: fadeIn() / fadeOut() / fadeToggle() / fadeTo();

Custom animation is very powerful. You can simulate all the above animations through parameter transfer. The method is: animate();

The method to stop animation queuing is: stop();

jQuery adds a new event hover(); The function is similar to the pseudo class in css: hover. The introduction is as follows

1. When the mouse passes a small li, there are two steps:

2. The current small li width changes to 224px, while the small picture inside fades out and the large picture fades in 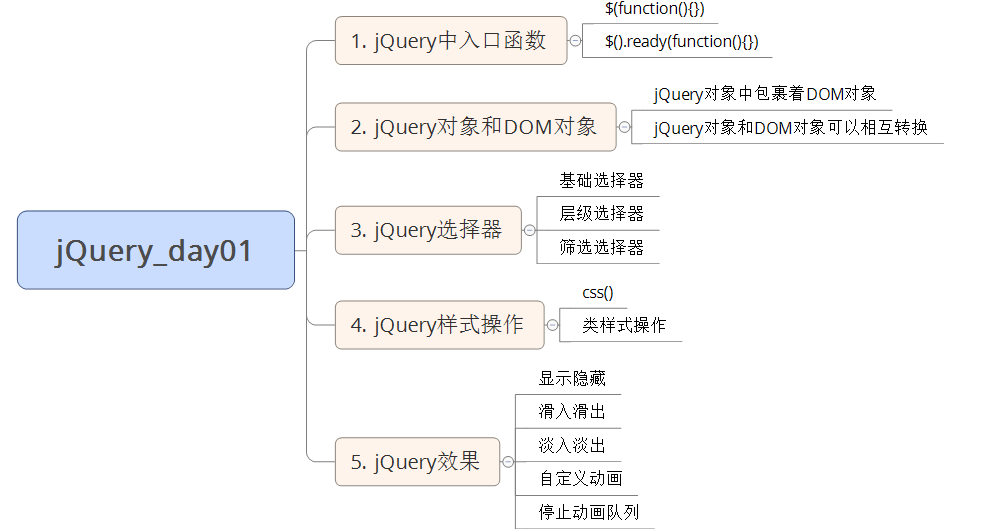 The top-level object $in jquery is special. It can be used as an object or a function***

(1). If an anonymous function is passed, it is used as the entry function (DOMContentLoaded)

(2) if a DOM object is passed, it is used as a type conversion to convert the DOM object into a jq object

(3). If a css selector (string) is passed, it is used as an element to get

(4). If it is a string of html content, it is used as an element object