K8s provides a series of basic resource definitions such as Pod, Service and Volume. In order to provide better scalability, CRD function was introduced in version 1.7. 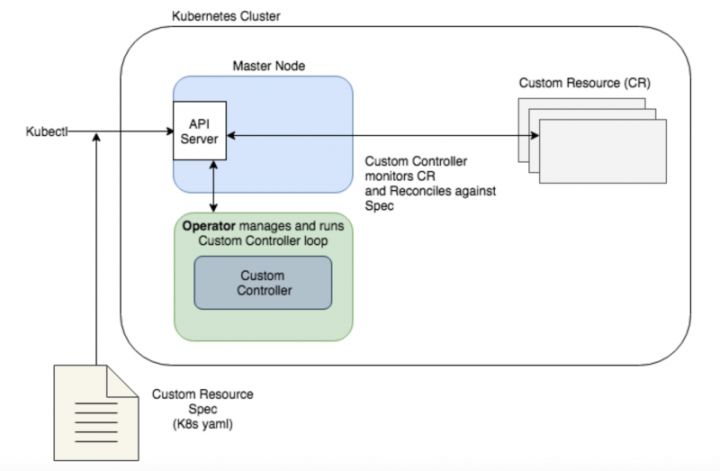 CRD is K8s's standardized resource expansion capability. Taking java as an example, int, long, Map and Object are built-in classes in java. Users can customize the Class to realize Class expansion. CRD is the user-defined Class in K8s, and CR is an instance of the corresponding Class.

With a hammer, all you see is nails

Our team (KubeOne team) has been working on how to deploy complex middleware applications to K8s. Naturally, it is also a practitioner of the Operator model. After nearly two years of development, the deployment of Middleware in K8s in various environments has been preliminarily solved. At present, there are many detours and pits in the middle.

KubeOne kernel has also undergone three major versions of iterations. The first two development processes are basically developed and designed according to the standard development process of follow Operator. Following a standard and typical Operator design process, everything seems to be so perfect, but every design is very painful. After practicing the Operator model, the most worthy of reflection and reference is "with a hammer, only nails can be seen". To sum up, there are four things:

Myth 1 all designs are yaml

The API of K8s is in yaml format, and the design process of Operator also allows you to define crd first, so the team directly adopted yaml format when starting design.

According to the standardized process, the team's design process for yaml is generally as follows:

This is the second version of the design:

Such pain is difficult to express in words. I feel that everything is out of control. There is no unified judgment standard and design standard. The public says that the public is reasonable and the woman says that the woman is reasonable. The content has been added and the field has been changed. No more than three times, during the third design, we collectively discussed and reflected on why it was so difficult to reach a consensus? Why does everyone understand differently? Why is it always changing?

From the huge yaml above, we can understand the complexity of our design, but this is not the most painful. The most painful thing is that we abandoned the original design process and design language and tried to use an open Map to describe everything. When there is no object or relationship in the design, there is only one attribute in the Map, so it doesn't matter whether it's right or wrong, or whether it's good or bad. In the end, it was just another field to fight for loneliness.

Is it wrong for the Operator to design CRD first and then develop controller?

Like Java Class, simple objects do not need to go through complex design processes. Designing yaml directly is simple and efficient.

When designing a complex system, such as application management, including multiple objects, complex relationships between objects and complex user stories, UML and object-oriented design are very important.

Only UML and domain language are considered in the design. After the design is completed, CRD can be regarded as java Class or database table structure, which is only an option when it is finally implemented. Moreover, many objects do not need to be persistent, nor do they need to trigger the corresponding logic through the Operator mechanism, so there is no need to design a CRD, but directly implement a controller.

Yaml is a formatted expression of interface or Class declaration. Conventional yaml should be as small as possible, as single as possible and as abstract as possible. Complex yaml is an arrangement result of simple CRD resources, which provides a similar one-stop resource matching scheme.

In the third version and PAAS core design, we adopted the following process:

Myth 2 everything is one

In order to ensure the final state of an application, or to manage an application using gitops, should the application related content be put into a CRD or an IAC file? According to the design of gitops, the whole document needs to be distributed every time it is changed?

Case 1: the application of WordPress needs to rely on a MySQL. How to define the final state?

Is the code above the final state of the wordPress application? This file contains the definition of DB and application required by the application. As long as it is distributed once, the corresponding database can be created first, and then the application can be pulled up.

Case 2: during each change, some contents of the whole yaml are modified directly, and then directly distributed to K8s, causing unnecessary changes. For example, to expand the capacity from 3 nodes to 5 nodes, after modifying the replica of the above yaml file, you need to distribute the whole yaml. The whole distributed yaml is parsed into the underlying stateful set or Deployment twice. After the parsing logic is upgraded, it may produce unexpected changes, resulting in the reconstruction of all pod s.

Yes, the dependency between multiple objects is realized through choreography. Choreography can be created by a single application or a complex site. Take Argo as an example.

For the second case, do you need to issue all complete yaml for each interaction?

When CRD or Iac is defined, the final state of a single object should only contain itself and references to dependencies. As with object-oriented design, we should not put all Class definitions in one Class.

Myth 3 everything is final

Case 1: application orchestration or take WordPress as an example, deploy WordPressDB and WordPress together, deploy DB first, and then create an application. The example yaml is the same as above.

The main idea of imperative programming is to pay attention to the steps executed by the computer, that is, tell the computer what to do first and then what to do step by step.

For example, if you want to filter numbers greater than 5 in a number collection (variable name), you need to tell the computer:

1. The first step is to create a set variable results that stores the results;

3. Step 3: judge whether each number is greater than 5 one by one. If so, add this number to the result set variable results.

The code implementation is as follows:

Obviously, this kind of code is very common. Whether you use C, C + + or C#, Java, Javascript, BASIC, Python, Ruby, etc., you can write it in this way.

Declarative programming is to express the logic of program execution in the form of data structure. Its main idea is to tell the computer what to do, but not specify how to do it.

SQL statement is the most obvious example of declarative programming, for example:

By observing the code of declarative programming, we can find that it does not need to create variables to store data.

Another feature is that it does not contain code for loop control, such as for and while.

• imperative programming: command the "machine" how to do things, so that no matter what you want, it will be implemented according to your command.

• explicit programming: tell the "machine" what you want and let the machine figure out how to do it.

The more the interface expresses "what you want", the more explicit it is; The more you express "how to", the more imperative you are. SQL is expressing what I want (data), not how to get the data I want, so it is very "declarative".

In short, the closer the expression of the interface is to human language - the serial connection of words (a word is actually a concept) - the more "declarative"; The closer to the computer language - "sequence + branch + loop" operation process - the more "imperative".

Based on the above analysis, orchestration or workflow is essentially a process of process control, which is generally a one-time process, and there is no need to force the finalization. Moreover, the final state cannot be maintained after the execution of site establishment orchestration, because it will be released and upgraded according to a single application in the future. Case 1 is a typical choreography, which only creates two object DB and the final state of the application at one time. 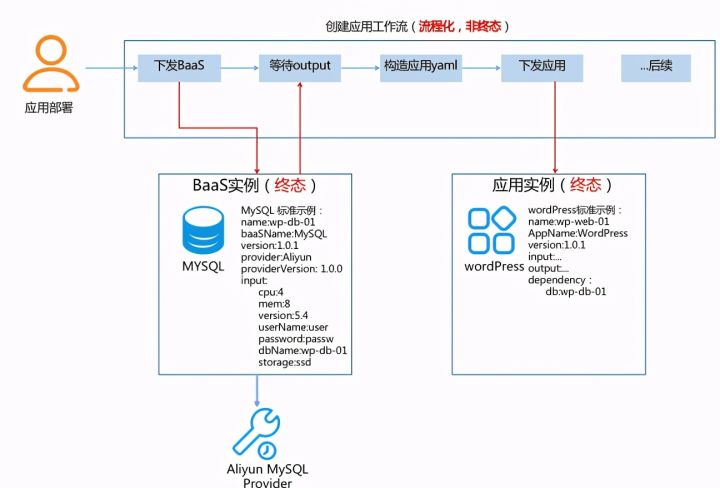 Application publishing is actually a process of controlling the finalization of two different versions of application nodes and traffic through a release order or workflow. It should not be a part of the final application state, but an independent control process. 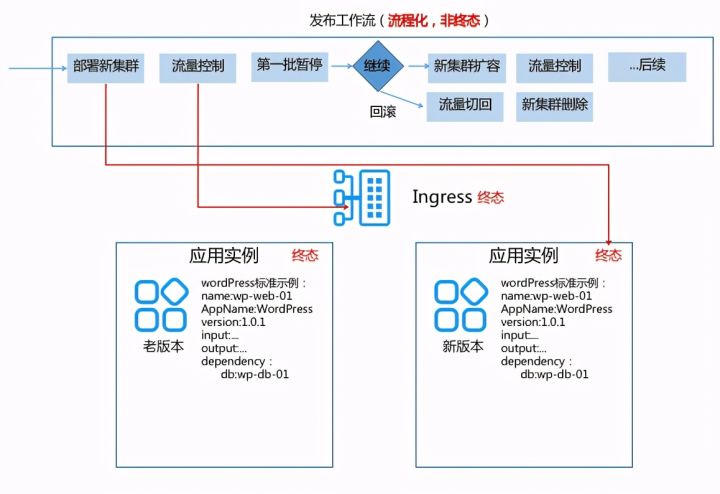 Without too much interaction, there is no need to pay attention to the scenario of the underlying implementation, that is, after the declaration is provided to the system, the system will automatically reach the state required by the declaration without human intervention.

Imperative and declarative are two complementary programming modes. It's like that after object-oriented, some people despise process oriented programming. Now with declarative, they begin to despise imperative programming. That's the house!

Myth 4 all interactions are cr

Because the API interaction of K8s can only pass yaml, everyone's design is centered on cr. all interactions are designed to issue a Cr and trigger the corresponding logic through watch cr.

Does all logic need to issue a cr?

If you need to call the corresponding interface frequently, try to call it directly through sdk. 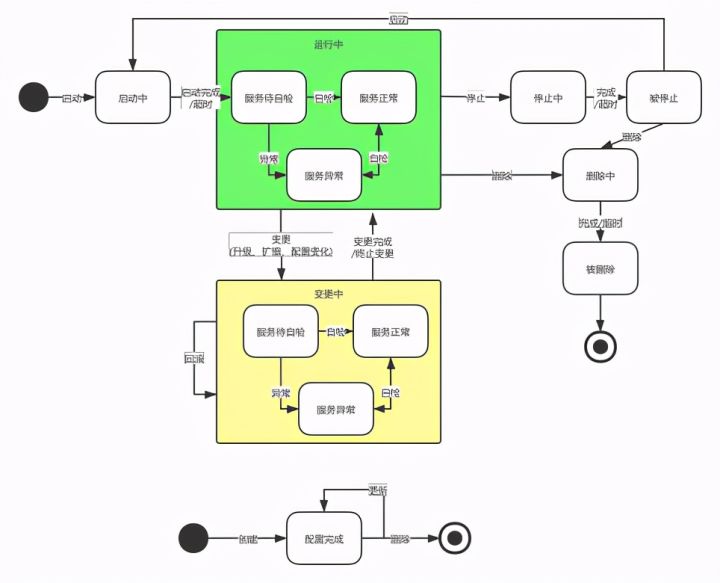 Different stateful applications need to trigger different logic when receiving different instructions. For example, when MQ receives the stop instruction, it needs to stop writing first to check whether the data consumption is completed. Events related to the application state machine cannot be covered only through yaml state machine, so we must break the mode of issuing cr. For applications, the ideal interaction mode is to apply the change of state machine through event driven, and trigger the corresponding logic when the state changes.

After more than 10 years of development, software design has formed a set of effective design methodology, k8s which is also designed with the support of these design methodologies. Taking the essence to remove its dross is what our programmers should do.

This article is the original content of Alibaba cloud and cannot be reproduced without permission.