There are several names (parent-child, base-derived)
Let's start with a code demonstration:

1. When inheriting a method of a parent class, if you do not want to call some methods of the parent class, you need to override them in the child class yourself.

(Override the work method in the parent class in the following classes, don't think too much about restrictions first)

2. When inheriting a parent method, your child overrides it, but still wants to execute the method whose parent is overridden, do the following:

(Find the car() method in the father class first, then jump to the mother class if none)

(2) If there is a parent above the inherited parent, then "always search to the end", then call, or inherit the next parent to find a method

The sequence of execution is as follows: 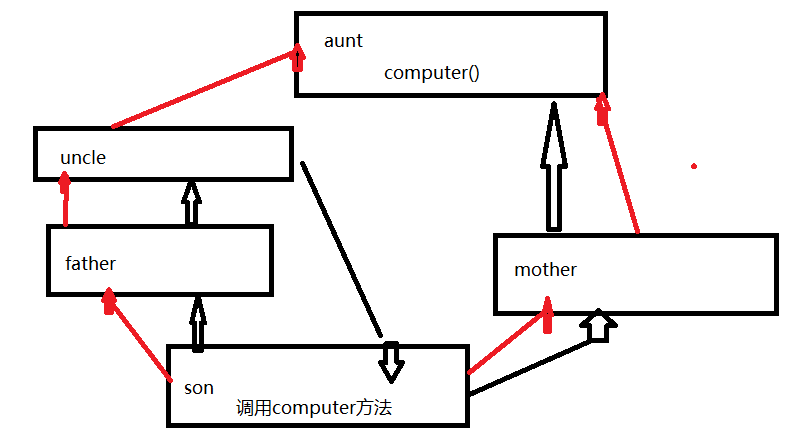 Red lines inherit upwards and black lines are the process of code execution
It's similar to (1) (2), but unlike (1) (2), when the method invoked is never found on the left, it doesn't always find the bottom. Instead, it goes back to the son subclass before the last parent, starts looking in the mother class, and finally points to the aunt class and finds its computer() method
(3) Summary: If you have a common parent, you will not always search to the end when looking for a method. Instead, you will search for the parent before the end and change to the original parent before the end. If you can't find it, you will find the parent after the end.) How to understand and remember

(4) Order of code execution when self. method () is used

(The code below modified a little)

When an object is looking for a method in the de-parent class, since the mother class does not have its method, after it is found and executed under the father class, there is also self.car(),This method should reasonably take precedence in the same class, but the result is mother.car. The simple reason is that when a self.method () is encountered, it should be returned to the class called by its object (the object that self points to, this code is obj) to execute its method call (in the case of the above code, obj.car() is called again).Then look for a method from its subclass, and then look for a method from its parent. The first parent, mother, has a car() method in the mother class, so call execution directly, over!).

(5) The u init_() method in the class is executed when the first one is found: