There is an identification of pipeline file on the disk. The transfer data is stored in memory and will not be stored in disk space.
To create a pipe file:
① Command:

Open pipeline file: due to the half duplex characteristic of pipeline, the flag can only be O_RDONLY and O_WRONLY 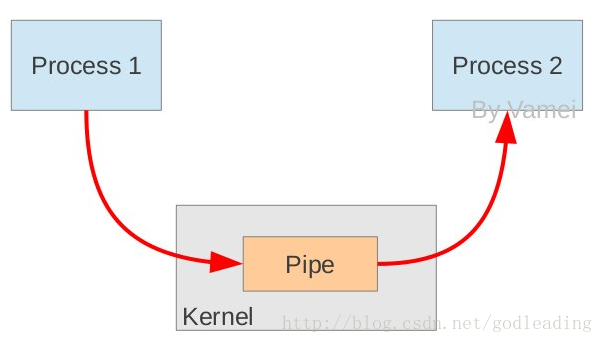 As can be seen from the above figure, there is only one buffer, and the pipeline is a half duplex communication mode
Exercise: process A accepts the data input by the user, and process B converts all the strings input by the user into uppercase and outputs them. The loop is executed, and the end input by the user ends.
A.c

Running A program alone will be blocked because the pipeline files must be opened at the same time to complete communication.
The reading operation can be completed only when the two terminals open A and B respectively.

To sum up, the two blocking modes of famous pipelines are:

Therefore, the pipe will not be blocked, and the read and write ends will appear at the same time.
The general framework is as follows:

The problem with this code is that the child process does not read data, but the parent process continues to execute, resulting in a problem in the terminal display. Asynchronous IO is needed to solve this problem.