What are the resources in UE?

https://docs.unrealengine.com/4.26/zh-CN/Basics/AssetsAndPackages/
In UE4, all resource files in the project can be considered UObject s serialized into files

Relationship between resource files and in-memory objects in UE

Come from
Resource Management for UE4

When packaging, these files may be made smaller platform-specific by cook, depending on the platform, and then placed in a compressed package with a suffix of pak. When the game runs, the program will mount and unzip the Pak packages, then load the resource files in the packages to use. For example, a Pak package is like Unity's AssettBundle package, and a uasset file is like a unit's. meta-managed resource file.

Programs do not use these files directly when they use resources, but instead convert them into UObjects or memory objects that other programs can use. For example, a grid resource file is actually a UStaticMesh object. Turning a resource file into a UObject object in memory is what resource management does.

For UE4, there are probably several steps to this process:

UE4 associates index resources through paths, and each resource has its own unique path.
Example

Loading resources is actually deserializing to construct objects in memory

In UE4, all resource files in a project can be thought of as UObject s serialized into files. Loading resources is actually deserializing to construct objects in memory

Hard and soft references to resources

Resource hard reference:
That is, Object A references Object B and causes Object B to load when Object A loads. It is common to say that resources represented by a hard reference are loaded into memory when the reference is initialized, so there is little need for a hard-referenced resource to load a method.

Resource soft references:
Soft references, that is, Object A references Object B through indirect mechanisms such as object paths in the form of strings.

FSoftObjectPath is a simple structure with a string containing the full name of the resource. It essentially represents the corresponding resource with a string, which allows you to find the target resource on the hard disk and load it into memory at any time.

FStringAssetReference: It's actually just an alias that sounds easier to understand. It's actually like this in the UE4 source code:

TSoftObjectPtr is the same as the SoftObjectReference in the blueprint

With regard to resource loading, I think there should be three types of requirements:

Here are some ways to reference resources in UE

Clicking the Play button this way will load all by default.

FClassFinder< T >:
It is typically used to load blueprint resources and obtain blueprint classes. This is because if C++ wants to create objects with blueprints, it must first get the Class of the blueprints, and then generate the blueprint objects from the Class:

This way you can control when the resource is loaded, and the load requires manual code loading, which is checked to see if it is loaded before loading. If it is not loaded, you need to use FStreamingManager to perform synchronous loading, and if it is already loaded, you can return the pointer to the resource object directly

This is the opposite of the construction-time reference mentioned in point 2, which allows you to load a resource at run time with the specified path.

The following is an example code:

There is also a potentially common global function, FindObject(), that queries whether a resource is loaded into memory and, if it exists, returns the resource object pointer or otherwise returns null. But we don't need to query before we use LoadXXX, because FindObject is inherently useful in LoadXXX to check for existence.

This approach does not provide a blueprint interface and calls in the blueprint need to be encapsulated in C++.
Examples of C++ encapsulation:
Create a FunctionLibrary and write the following code:

Click on VS generation and UE4 compile to invoke in the blueprint:

Since the soft reference contains the full path name of the resource, instead of writing the path name again, call the member method as above to load the resource into memory.

FStreamableManager.RequestAsyncLoad()
First, the FStreamableManager needs to be created, and it is officially recommended that it be placed in a certain type of global game singleton object, such as one specified in DefaultEngine.ini using GameSingletonClassName.

FStreamableManager.RequestAsyncLoad(): Loads a set of resources asynchronously and invokes the delegate when finished.

The FStreamableManager also has a synchronous loading method: the SynchronousLoad() method performs a simple block loading and returns the object.

If the resource is never used and you want to uninstall the resource object from memory, the code is as follows:

Objects in UE4 (i.e. class objects derived from UObjects) are best not to use C++ new/delete, but to use the object generation method provided by UE4, otherwise inheriting the garbage collection capabilities of UObjects is useless.

If you have a derived class of UObject (non-Actor, non-Component), you can use the NewObject() template function to create its instance object:

To create components for an Actor, use the UObject::CreateDefaultSubobject() template function

Because blueprints are scripts in nature and not direct C++ classes, they often need to be generated by dynamic types. All ways to load resources and create them in a scene are dependent on the SpawnActor code.

AssetManager is a singleton UObject that UE4 provides developers with a resource management class for querying and reading Assets while runtime is in progress.

(UE4 4.20)UE4 gets the resource path for all the specific resources (FAssetData)

First: Where is the picture located? Web, computer files, or uasset resources for UE projects? 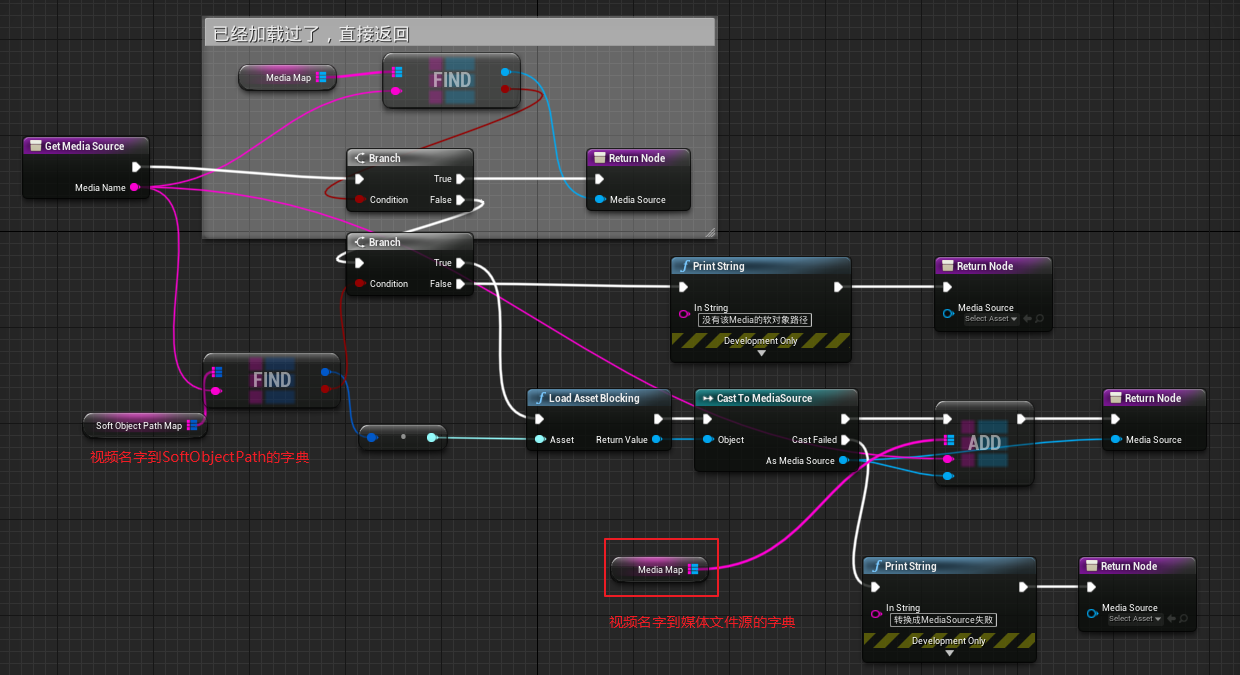