1. First briefly review the general steps. The knn algorithm can be divided into three steps. The first step is to determine the K value, that is, to find the k data similar to the first k test points. Generally, the value is an integer not greater than 20. The second step is to find the distance between the test point and the sample point. The third part is to determine the type of test points according to the sample rules. The following is a picture found on the Internet.

The following is a picture found on the Internet. When k=3, the determined sample points are within the circle in the figure. At this time, it is natural to judge that the test points are blue triangles according to the statistical rules.

Similarly, different values of k will also cause errors in the results. The following figure is a representative figure found on the Internet 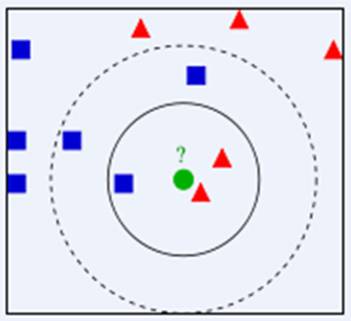 For the distance test in knn algorithm, the following test method is generally used, and the test points are represented by (x, y)

First, write a function img2vector, convert the image into a vector, create a 1 * 1021 NumPy array, and store the 32 * 32 image character values in the array.

Then there is the test code of the identifier

The output result of the function depends on the machine speed. Loading the data set also requires a lot of data and has a certain error rate. Changing the value of k will also affect the error rate of the algorithm.