MongoDB is characterized by no Schema restrictions and high flexibility. The data format is BSON. BSON is a binary storage format similar to JSON, called Binary JSON for short. Like JSON, it supports embedded document objects and array objects.

MongoDB stores data as a document in BSON format. It consists of key and value.

MongoDB has its own replica set and sharding, which is naturally suitable for a large number of scenarios. There is no need for developers to divide databases and tables through middleware, which is very convenient.

Many times, we need to store some operation logs, which may only need to be stored. For example, in the last month, the general practice is to clean them regularly. There is the concept of fixed set in MongoDB. We can specify the size when creating the set. When the amount of data exceeds the size, the old data will be automatically removed.

There are web pages and data in Json format, which are generally stored in table format. If we use MongoDB, we can directly store the captured Json data in the collection without format restrictions.

In the social scene, MongoDB is used to store user address and location information, and the nearby people, nearby places, etc. are realized through geographic location index.

Different commodities have different attributes. The common practice is to extract the public attribute table and associate it with SPU. If MongoDB is used, the attributes can be embedded directly in SPU.

Insert a single document into a collection

Insert multiple documents into the collection

Single or multiple files are inserted into the collection

Aggregation there are two ways to realize the need for data statistics. One is aggregate and the other is MapReduce.

Aggregation there are two ways to realize the need for data statistics. One is aggregate and the other is MapReduce. 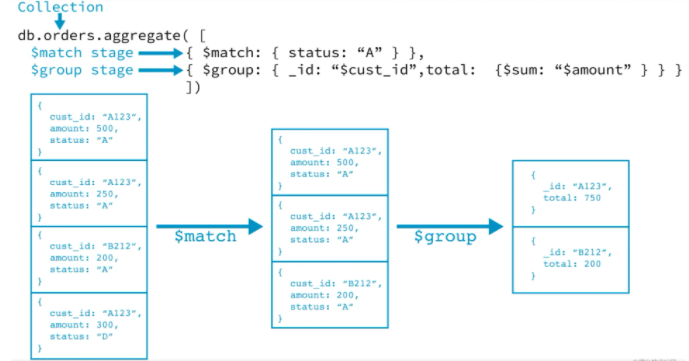 Aggregation has many built-in functions. After using these functions, we can count the data we want.

$project: modify the structure of the input document. It can be used to rename, add, or delete fields, or to create calculation results and nested documents.

$limit: used to limit the number of documents returned by the MongoDB aggregation pipeline.

$skip: skip the specified number of documents in the aggregation pipeline and return the remaining documents.

$group: groups documents in the collection, which can be used to count results.

$sort: sort the input documents and output them.

$unwind: split an array type field in the document into multiple pieces, each containing a value in the array.

The following figure shows the execution principle of MapReduce: 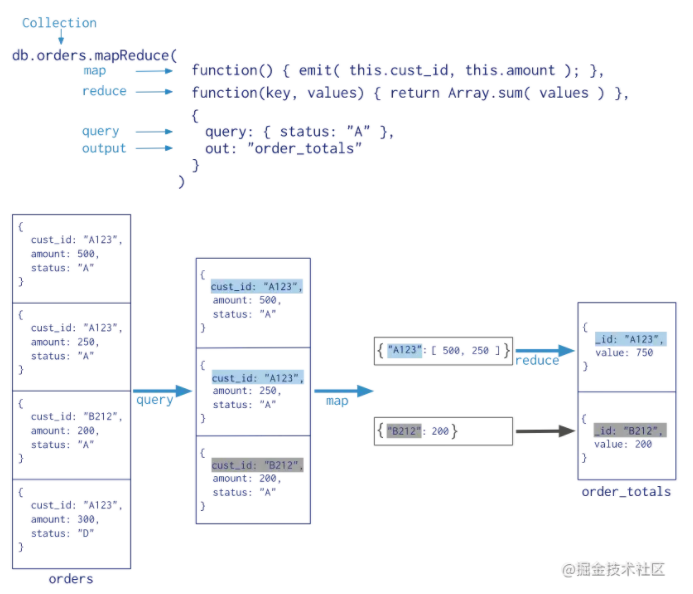 There are 4 pieces of data in total. Query specifies query criteria and only processes data with status=A.

In the map stage, the data is grouped and aggregated, that is, the effect of the third part is formed, according to cust_id de duplication statistics.

The key in reduce is cust_id and values are the total amount set. Then perform sum operation, and the final result is output to a collection through out.

Everything is limited. In some scenarios, data relationships cannot be completely described in an embedded way, or there will be multiple sets. It is convenient for users using MongoDB to support transactions.

The release of mongodb version 4.0 has brought us native transaction operations.

Attention should be paid to the security in MongoDB. At present, it is unknown whether there are mandatory restrictions on startup. In the past, the authentication method can not be specified during startup, that is, access can be obtained without a password. Then, the default port directly used by many people is exposed on the public network, giving opportunities for illegal children, and the data is deleted, There are many cases where bitcoin needs to be used to retrieve data.

You still need to enable security authentication. There are many built-in roles. Different roles have different operational contents, and the control is relatively detailed.

The replica set consists of the following components:

Arbiter: the arbitration node itself does not store data, but only participates in the election. 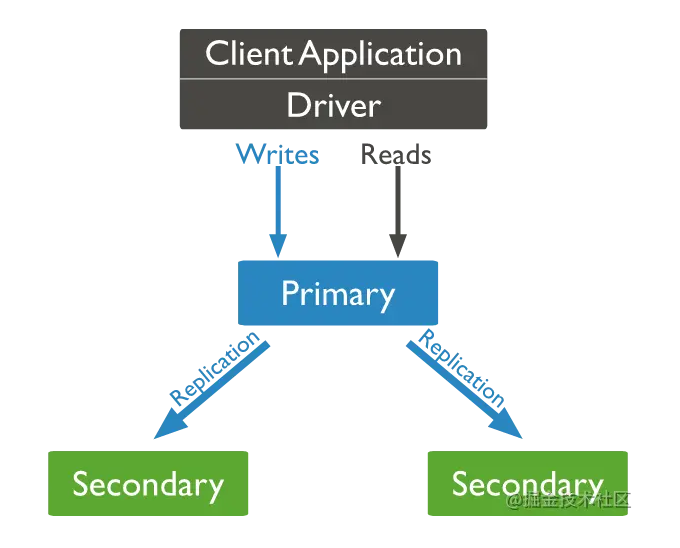 Sharding is the absolute highlight of MongoDB, which splits the data horizontally into multiple nodes. MongoDB fragmentation is fully automatic. We only need to configure the fragmentation rules, and it can automatically maintain data and store it in different nodes. MongoDB uses sharding to support large data storage and high-throughput operations. 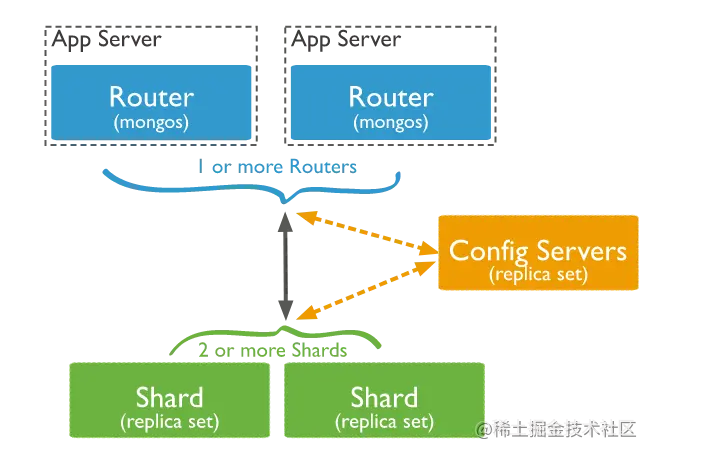 Shard: the data of each shard is an independent and complete copy. And can be deployed as a replica set.

Mongos: mongos is a query router. At the middle layer between the client and server, the request will be directly to mongos, which will route to the specific Shard.

Config Servers: stores the routing information of all nodes and fragmented data in the cluster.

GridFS is a sub module of MongoDB. It is mainly used to store files in MongoDB, which is equivalent to a built-in distributed file system of MongoDB.

In essence, the data of the file is stored in blocks in the collection. By default, the file collection is divided into FS Files and FS chunks.

fs.files is the basic information for storing files, such as file name, size, upload time, md5, etc. fs.chunks is the place where the real data of a file is stored. A file will be divided into multiple chunk s for storage, generally 256k / piece. 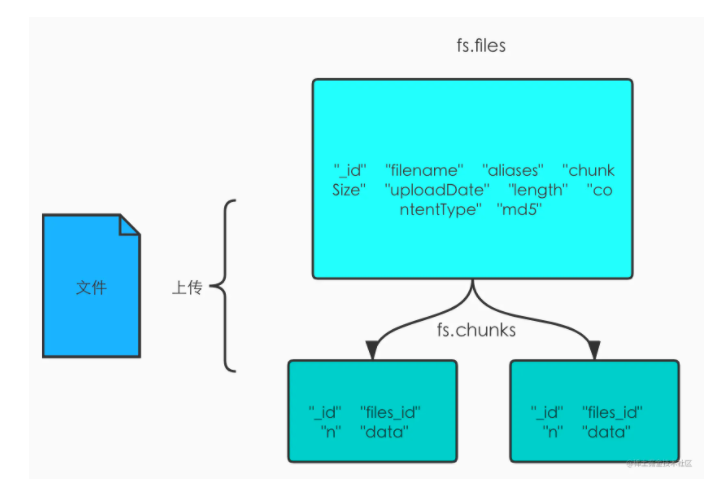 If MongoDB is used in your project, you can use GridFS to build a file system, so you don't have to buy third-party storage services.

The advantage of GridFS is that you don't have to build a file system alone. You can directly use the self-contained file system of mongodb. Backup and fragmentation depend on mongodb, which is also convenient to maintain. 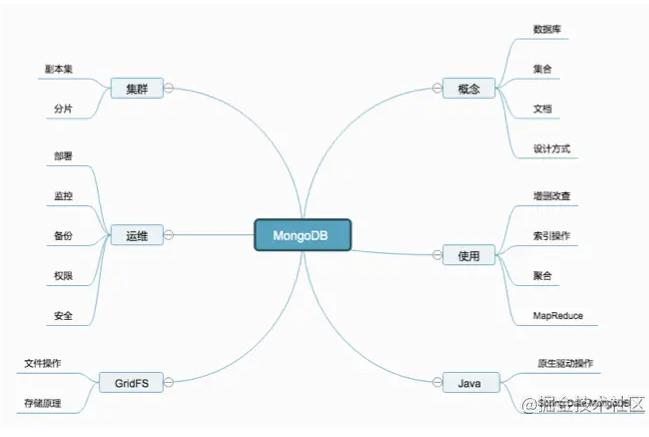 Syntax comparison between MongoDB and Mysql 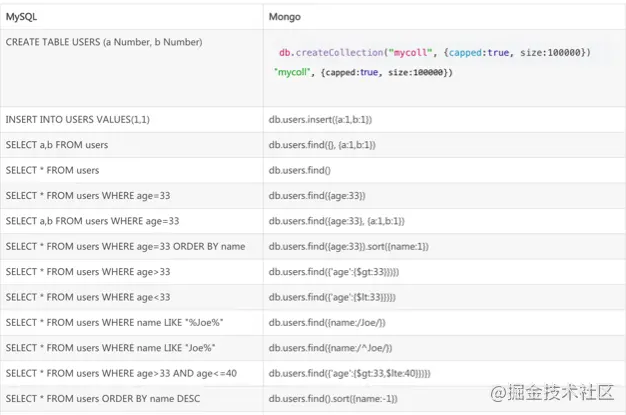 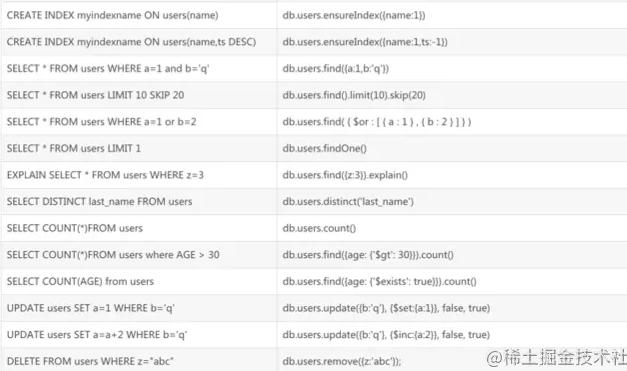 You can directly inject MongoTemplate to operate MongoDB:

Create an entity class corresponding to the MongoDB collection

The format finally stored in the data is as follows: