Download and install first Vagrant and VirtualBox , you don't need to know what it is. After installing the software, open cmd or the terminal and execute the following commands to install the operating system. It's so simple!

🙉 The main system installation methods are listed below 🙉 :

Don't you understand? It doesn't matter, just enter it directly!!!

☀️ Want to get started? Want to unlock 🔓 More ways to play? Look down, take you to play Vagrant!!! ☀️

Vagrant - a command line utility for managing virtual machines, developed in Ruby language. In other words, you can save all the operations of creating an operating system using a virtual machine, such as creating a virtual machine, mounting an image file, and clicking install step by step; Using vagrant, you don't need to do any of these. It's a simple 2-line command to quickly create your personal system.

❤️ How to get started: Vagrant installation ❤️ 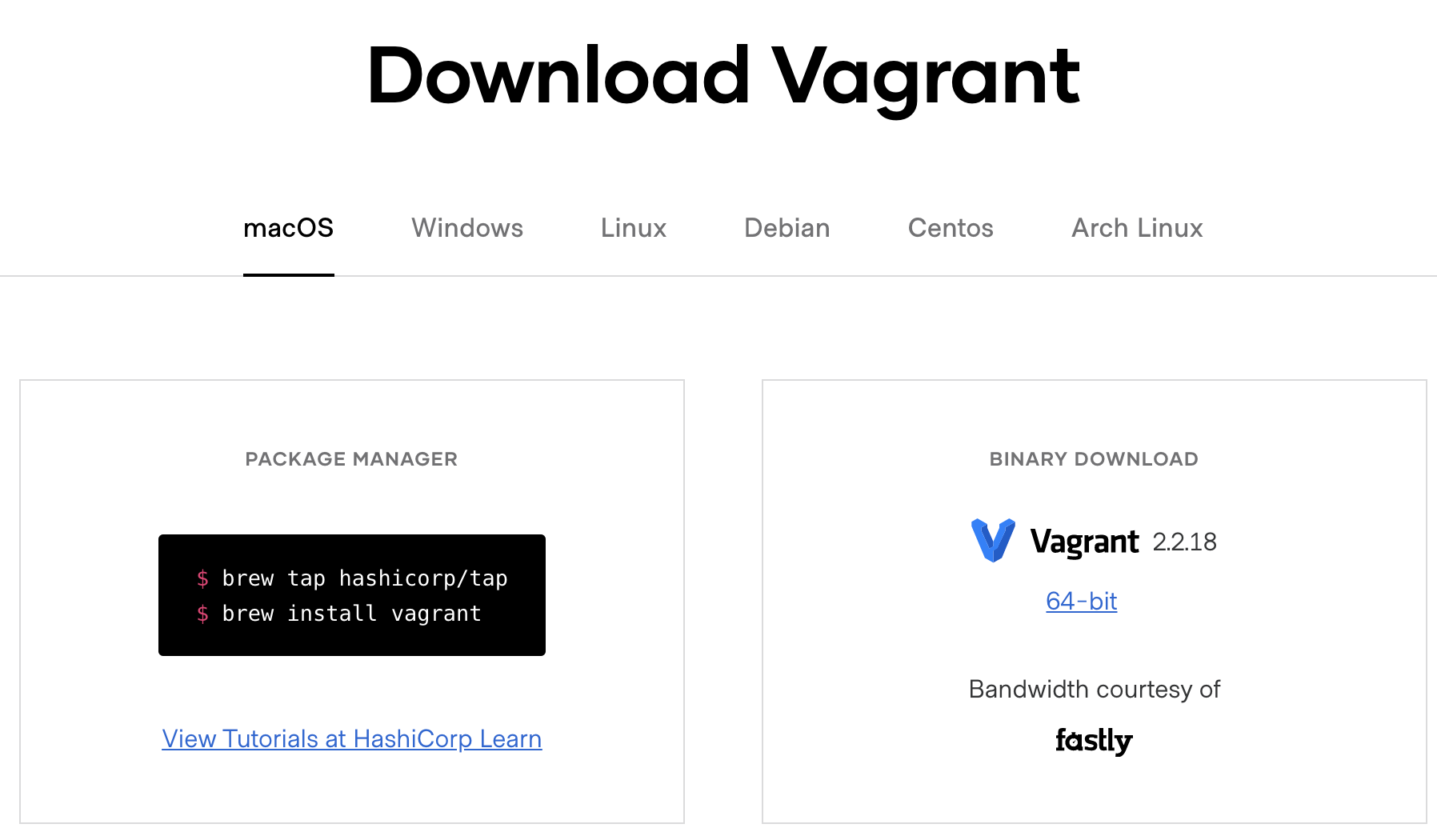 After installation, it is convenient to use and enable automatic completion of the command line:

o(￣ ▽ ￣) d, after installation, restart the terminal, try to enter some commands vagr, and then directly press Tab to bring out the complete command automatically. 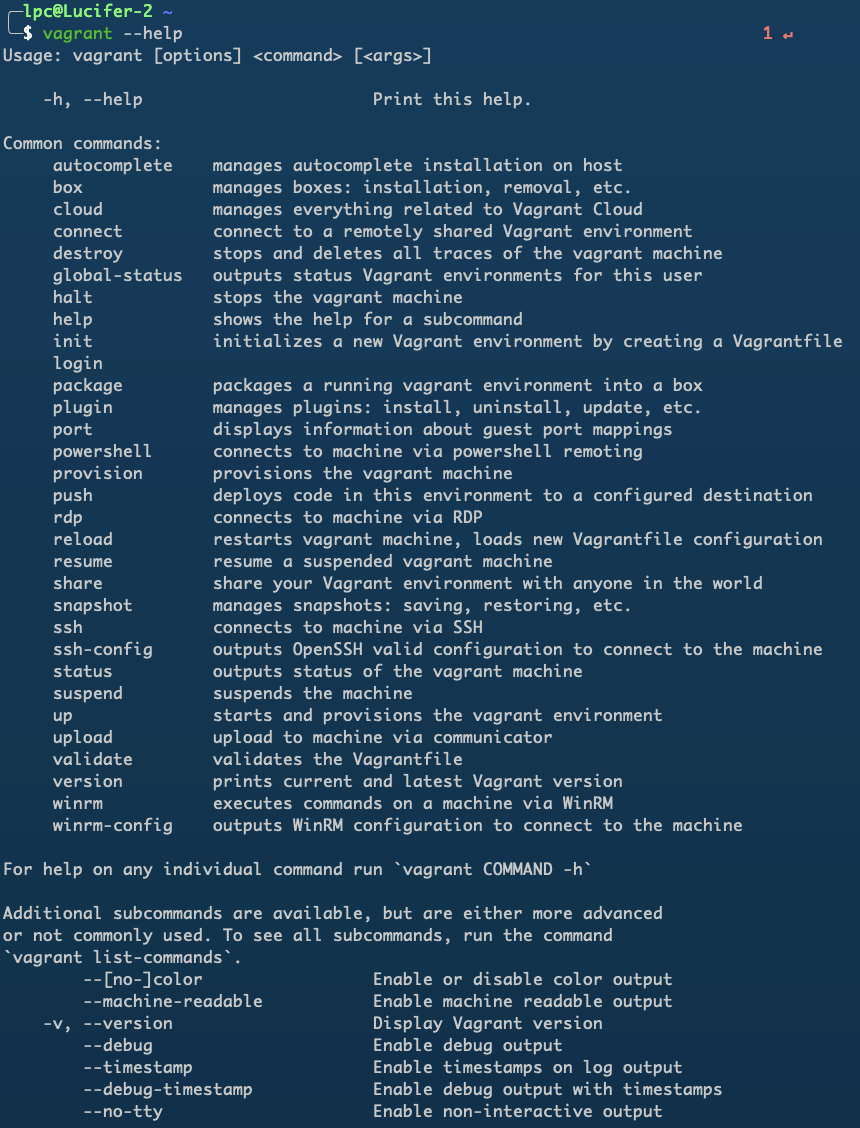 ☺️ Obviously, this command is to help us understand what commands Vagrant has, what functions and how to use them.

With this command, you can view the details of the virtual machine system installed in the current system, which is very convenient.

Download the box to the local, specify the local box to add, and the name is centos7.

After initializing the virtual machine system, a Vagrant file will be automatically generated, which can be customized and edited to play with Vagrant key.

After you edit a Vagrantfile, you are not sure whether it is written correctly. You can use this command to verify whether it is correct. 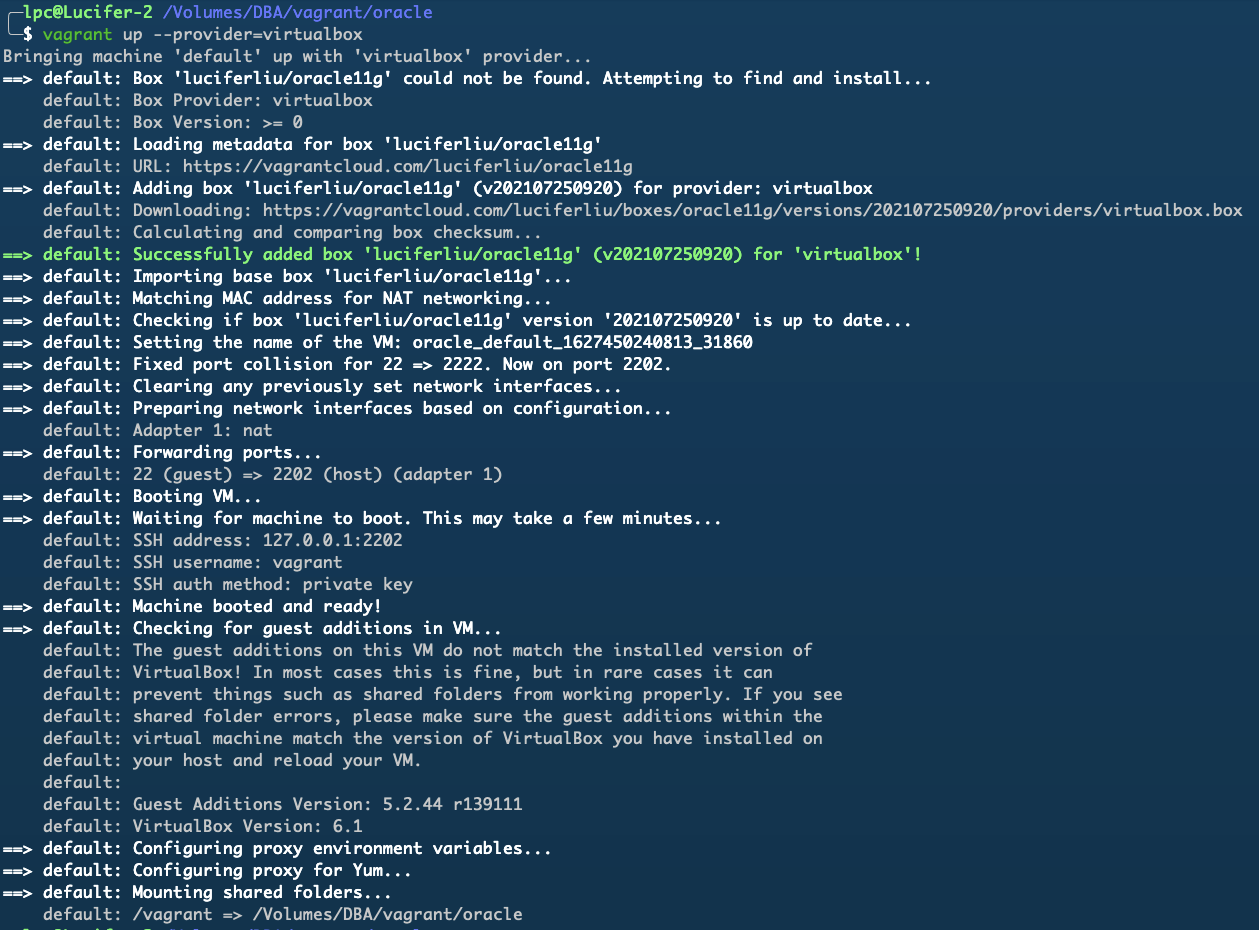 Start the virtual machine system with the default virtual machine virtualbox. The process shows that if no box has been added locally, vagrant up will automatically download and add it after startup.

With this command, you can quickly connect to the system without conventional SSH. The default user is vagrant and the password is vagrant.

Shut down the virtual machine system

After the shutdown command is executed, the virtual machine system will shut down immediately.

Why package the system? Very simple, you can back it up after packaging, share it with your friends, and use it to synchronize the one click deployment development environment.

The delete command will delete your virtual machine system, including all files, which will disappear without trace. Use it with caution ⚠️.

This section mainly introduces the management commands of Vagrant plug-in:

Displays all the Vagrant plug-ins you installed. 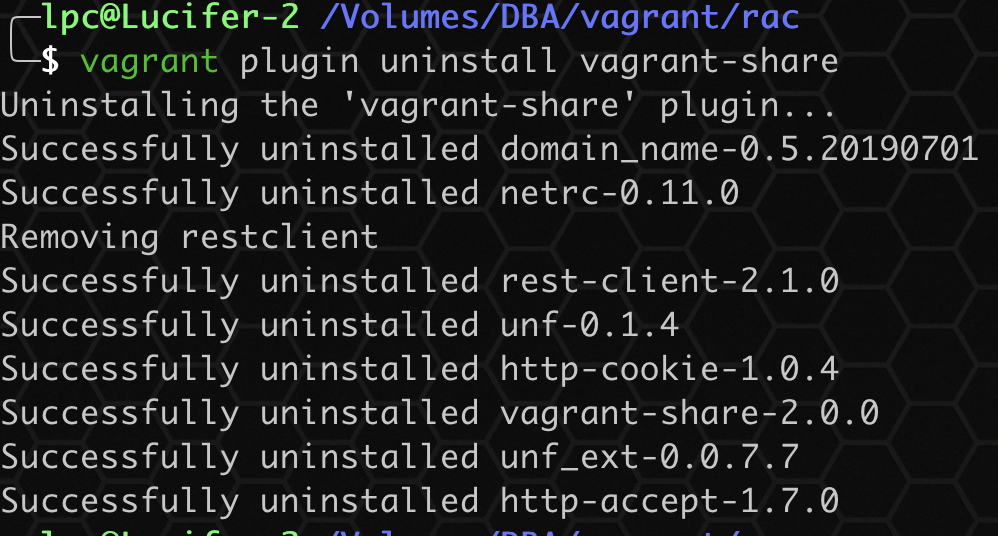 When there is a problem with the plug-in, you can use the repair command to repair it.

Since it is a plug-in, of course, it needs to be updated frequently. Use the update command to update your plug-in.

Since plug-ins are mentioned above, we recommend common plug-ins. The newly installed vagrant is equivalent to an unarmed soldier. If you want to have strong combat effectiveness, you need to be fully armed with plug-ins. Vagrant has many powerful functions out of the box to let your environment start and run.

👌🏻 Here are some plug-ins I have installed:

❤️ By the way, let's share a solution to the slow installation of Vgrant plug-in: ❤️

Yes, it is to replace the source of RubyGems and ensure that there is only one source. If it fails, replace it, 😌 It's better to slow down than not to use it.

Next, I'll teach you how to use ngrok to share your virtual machine environment with People all over the world!!!

Step 1: install ngrok, download the installation package from the official website, unzip it as an executable file, and directly double-click o(￣▽ ￣) d.

Step 2: you need to register an ngrok user and obtain the authorization code to authorize the local machine.

Step 3: test whether ngrok is available

There is a small premise here: you need to configure ngrok in the environment variable, otherwise vagrant cannot get the change command:

Note: I put the extracted ngrok executable tool into the / opt/vagrant/bin directory. Refer to the above configuration.

Enable sharing on the server:

Note: during the process, you need to enter the password twice to provide it to the client for login.

If the server displays the above figure after execution, it indicates that the sharing has been successful and the client can access it.

Simulate other friends to connect to my virtual machine environment: 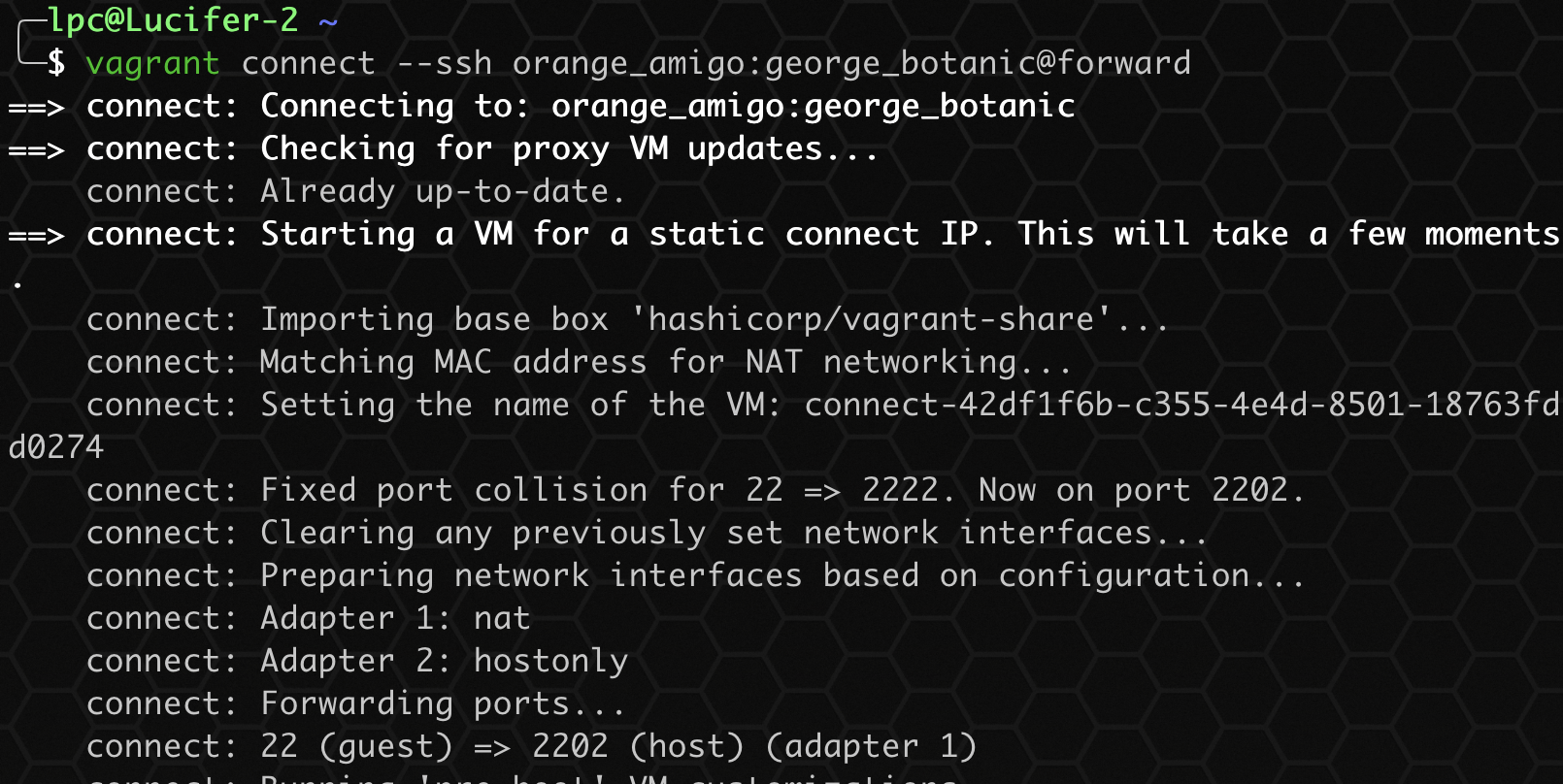 After entering the password here, I have connected to the virtual machine environment. This is one of the nodes of an Oracle RAC environment: 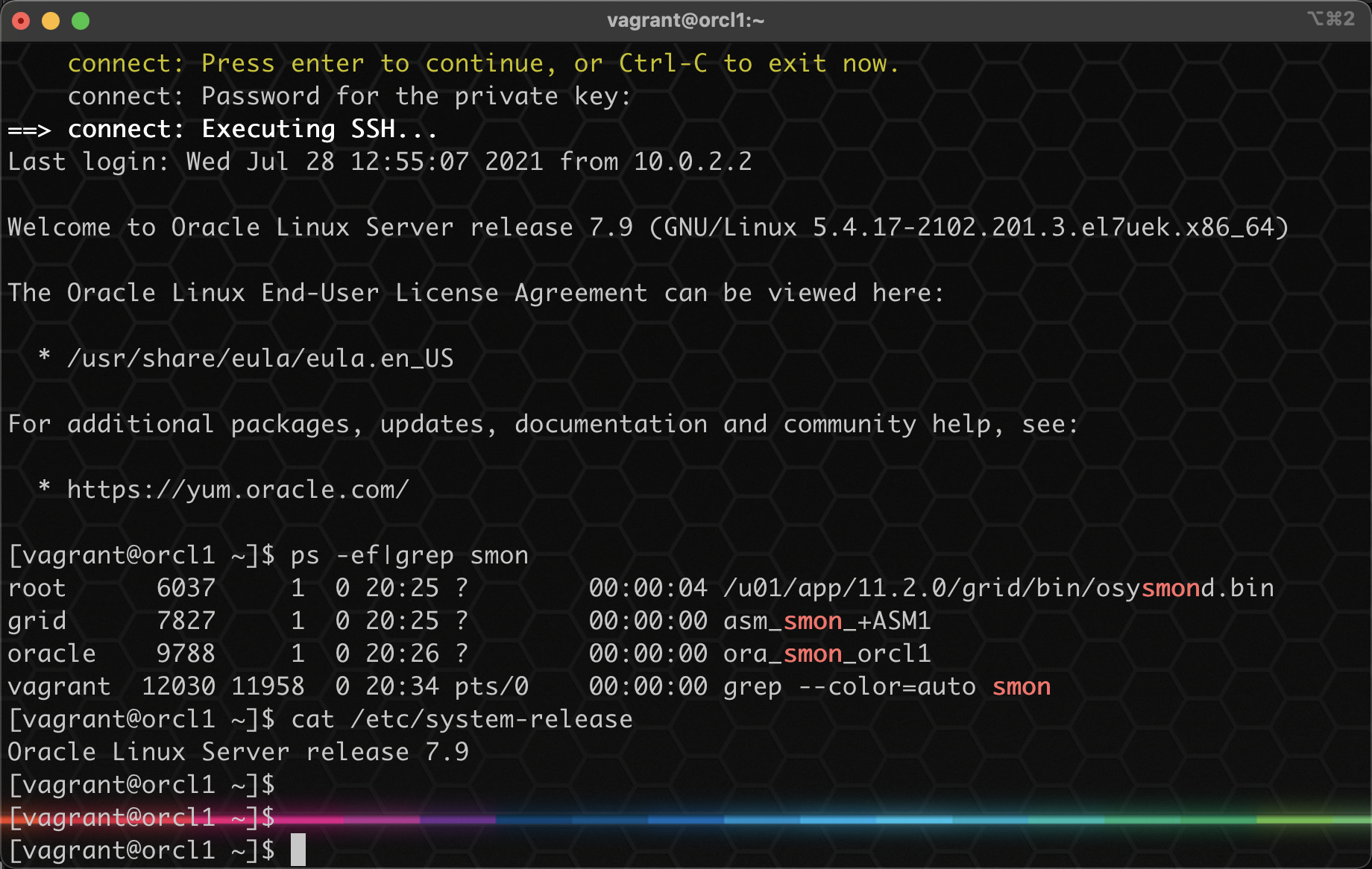 Orange here_ amigo:george_ botanic@forward It is generated automatically. It is recommended to fill in according to the actual situation.

Next, I'll teach you how to use packer to create a customized virtual machine environment for you!!!

Step 1: install the packer, download the installation package from the official website, unzip it as an executable file, and directly double-click o(￣▽ ￣) d. 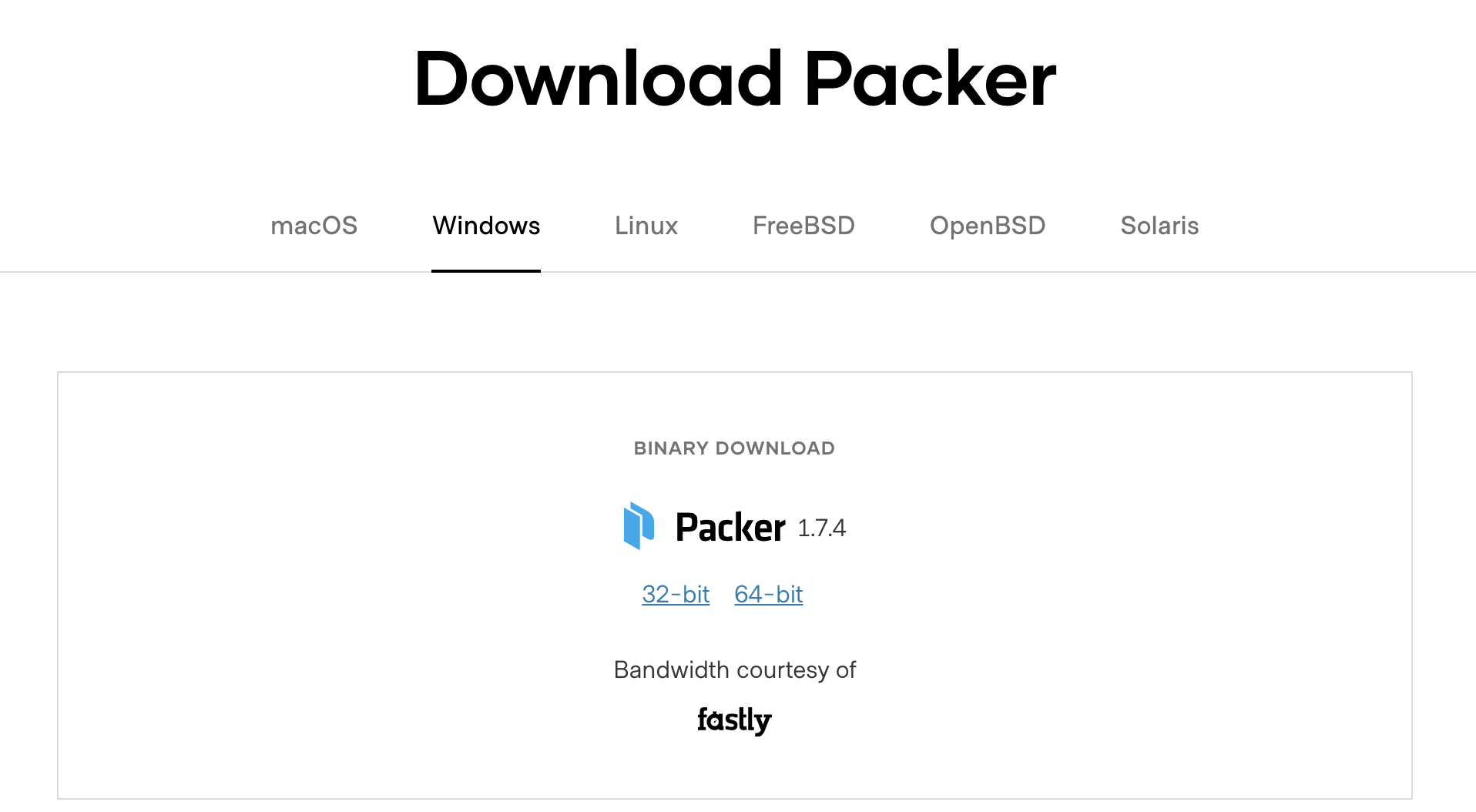 There is a small premise here: you need to configure packer in the environment variable, otherwise vagrant cannot get the change command:

Note: I put the decompressed packer executable tool into the / opt/vagrant/bin directory. Refer to the above configuration.

Step 2: download a centos or windows image, that is, the installation package. Take centos as an example:

Here, I have successfully downloaded it. I need to check the sum:

Step 3: here, we use the template written by the predecessor bento for packaging. First, through the git clone project:

The revised content is as above, and the reader can fill in it according to the actual environment.

It should be noted that the reader's main modifications are:
1. Storage location of iso:

Modify the above two parts.

Here, - only = virtualbox ISO means that only the box files of virtualbox are created. 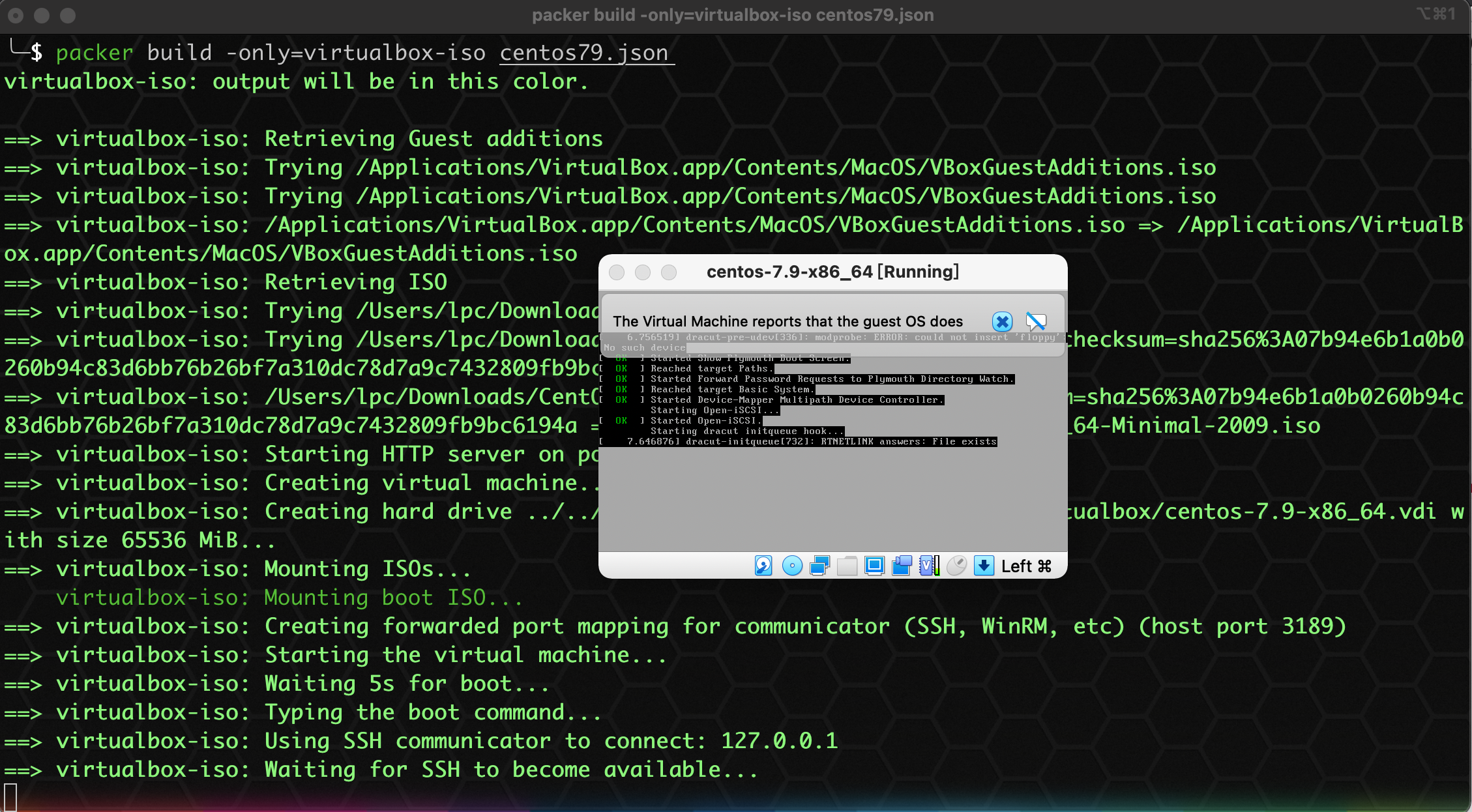 In the process of implementation, we don't need to do anything. We just need to be a beautiful man quietly and wait to finish it. 😄

Idleness is also idleness. After studying the script of the great God, I found a script very interesting. Take it out and share it:

To put it simply: when we install a virtual machine system and want to package, some excess space or garbage in the system will occupy space, resulting in too large packaged boxes. Using this script will clean up these garbage and excess space, making the packaged boxes very small, which is basically the same size as the initial image. ❤️ It can be said to be a gadget of grey Chang Nice!!! Love, love, collect a wave.

To get back to business, after a period of waiting, our packer ran out:

😰 The report is wrong. It says that the visit to GitHub failed. ASI, the script written by the foreign god, is uncomfortable for the domestic GitHub. Find a way to solve it:

Add the following contents to the networking.sh script:

Test if you can:

👌🏻， No trouble, old fellow, ha ha, forget that linux ping will not stop automatically, unlimited ping. 😓 Let's do it again. If I can do it again, I'll choose the code! 😄 ， Amend to read:

We only ping 10 times, just a minute! 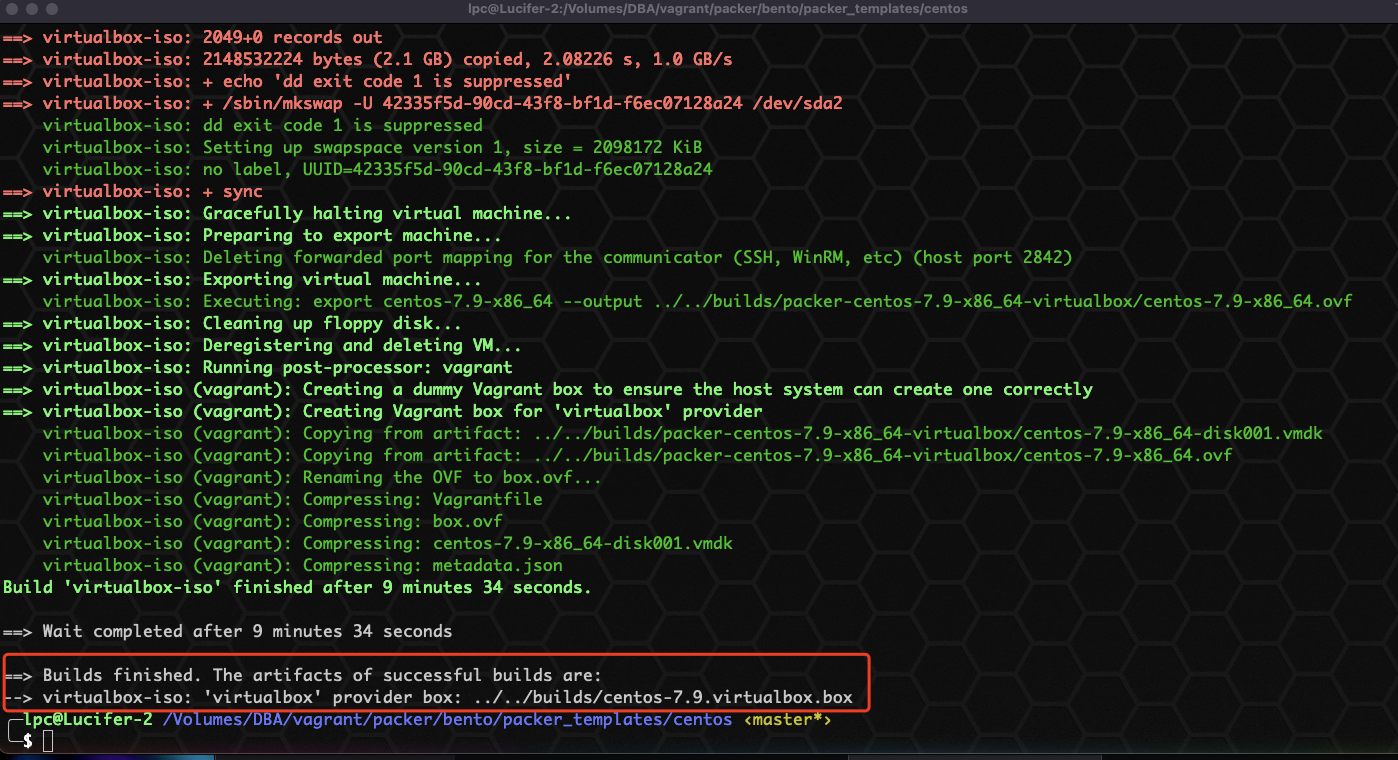 🎉 The emperor has lived up to his heart and became Nice! 👌🏻

After packing, the box is only more than 300 M. let's test whether it can be used: 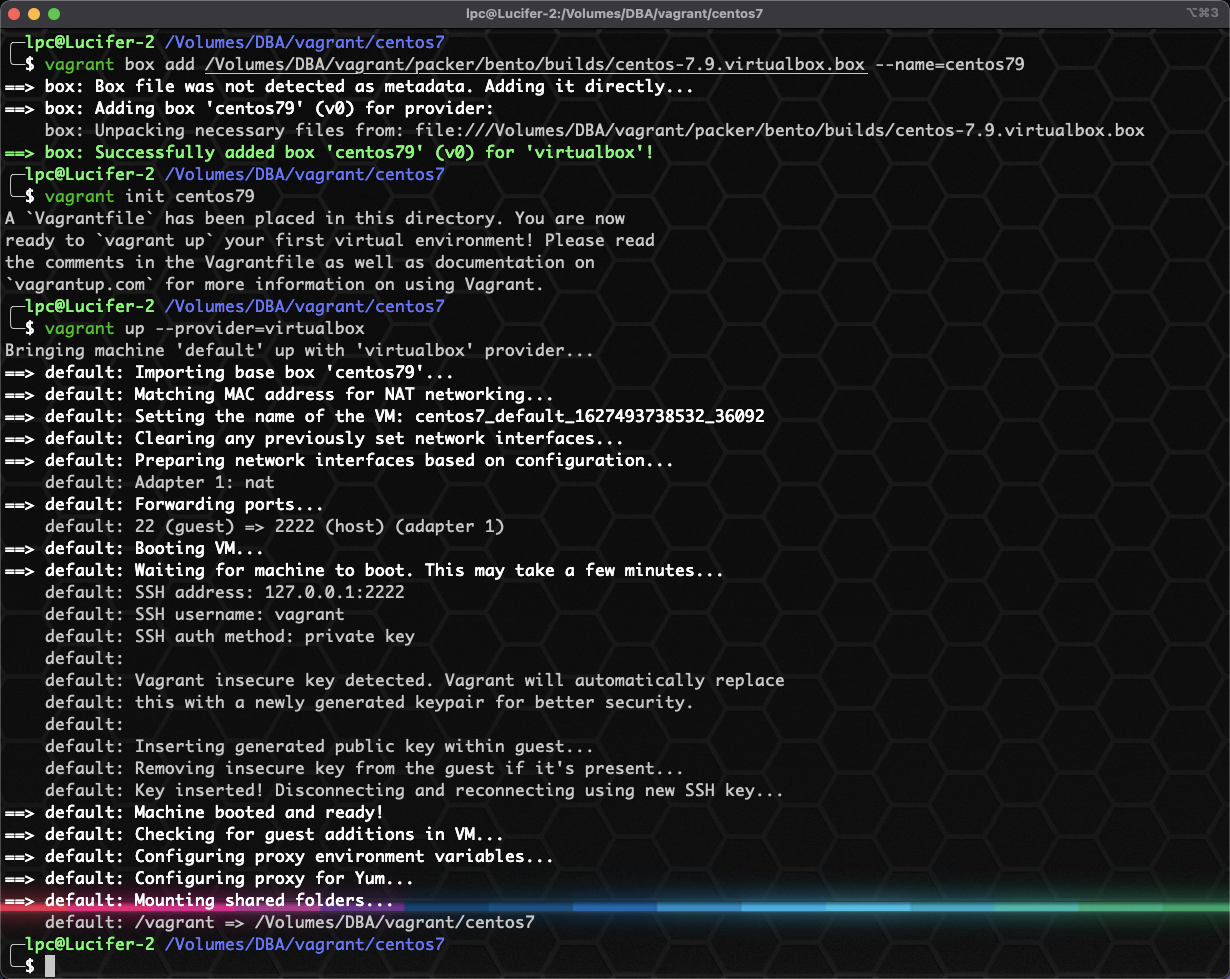 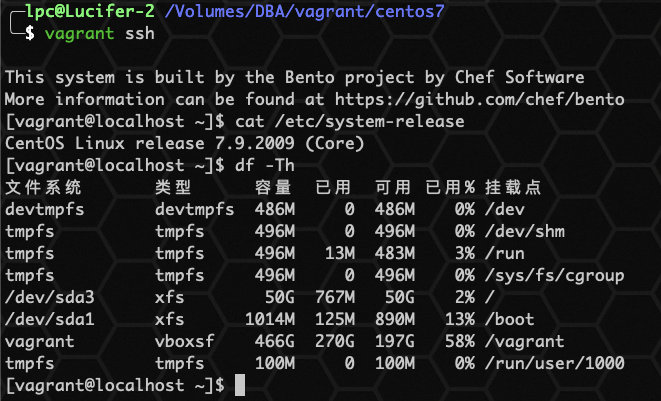 There's nothing wrong with using it. It's very good and powerful. Here's the packer. 😄

I only talked about two high-level playing methods. One is the combination of gnrok and vagrant share plug-ins, and the other is the packer box. I'm also slowly studying and playing. If you are interested, you can pay attention to the bloggers. 😄

Ha ha, it is said that the end point of all transactions is to return to the origin, which is unloading! 😄， In order to blog for you, I have uninstalled and installed many times before and after, which is quite experience.

Deleting the vagrant program will remove the vagrant binaries and all dependencies from your machine. After uninstalling the program, you can still reinstall using standard methods. Uninstalling vagrant does not delete user data. The following sections of this section provide more detailed instructions on how to remove the directory from the system.

Use the add / Remove Programs section of the control panel to uninstall, so I don't need to teach you, ε= (´ ο｀*))) No, geek uninstaller, let's go.

⏰ Write at the end

I've just got in touch with Vagrant. If there are big guys who play well, you can add my friends, share your experience and give advice. I feel that Vagrant's playability is still very high. You can start if you are interested. 😄