Nginx (engine x) is a high-performance HTTP and reverse proxy web server. It also provides IMAP/POP3/SMTP services. Nginx was developed by Igor sesoyev for Rambler.ru, the second most visited site in Russia. It is famous for its stability, rich feature set, simple configuration file and low consumption of system resources

Nginx is specially developed for performance optimization. Performance is its most important consideration. It attaches great importance to efficiency in implementation, can withstand the test of high load, and supports up to 50000 concurrent connections

The general access process is that the client directly accesses, sends a request to the target server and obtains the content. After using the forward proxy, the client sends a request to the proxy server and specifies the target server (original server). Then the proxy server communicates with the original server, transfers the request and obtains the content, and then returns it to the client. The forward proxy hides the real client and sends and receives requests for the client, making the real client invisible to the server

For example, if the browser cannot access Google, you can use a proxy server to help you access Google. This server is called forward proxy

Compared with the general process, after using the reverse proxy, the server that directly receives the request is the proxy server, and then forwards the request to the server that actually processes it on the internal network, and the obtained results are returned to the client. Reverse proxy hides the real server and sends and receives requests for the server, making the real server invisible to the client. It is generally used when processing cross domain requests

For example, when you eat in a restaurant, you can order Sichuan food, Guangdong food and Jiangsu and Zhejiang food. The restaurant also has chefs of three cuisines 👨‍🍳， But as a customer, you don't care which chef makes the dishes for you, just order. The waiter assigns the dishes in your menu to different chefs for specific processing. Then the waiter is the reverse proxy server

The reverse proxy server can hide the existence and characteristics of the source server. It acts as an intermediate layer between the Internet cloud and the web server. This is good for security, especially when you use web hosted services

For the early rising system, this mode is competent when the functional requirements are not complex and there are relatively few concurrent requests, and the cost is also low. With the continuous growth of the amount of information, the rapid growth of access and data, and the continuous increase of system business complexity, this approach can not meet the requirements. When the amount of concurrency is particularly large, the server is easy to collapse

In the case of explosive growth of requests, no matter how strong the performance of a single machine is, it can not meet the requirements. At this time, the concept of cluster arises. A single server can use multiple servers, and then distribute the requests to each server and the load to different servers. This is load balancing. The core is "sharing pressure". Nginx implements load balancing, which generally refers to forwarding requests to the server cluster

How is the load balancing algorithm implemented

In order to avoid server crash, the pressure of the server is shared through load balancing. The polymorphic servers are formed into a cluster. When users access, they first access a forwarding server, and then the forwarding server distributes the access to the servers with little pressure

Each request is allocated to different back-end servers one by one in chronological order. If a back-end server goes down, it can automatically eliminate the faulty system

Each request is allocated according to the hash result of the access IP, so that visitors from the same IP can access a back-end server, and can effectively solve the problem of session sharing in dynamic web pages

In order to speed up the resolution of the website, dynamic pages and static pages can be parsed by different servers to speed up the parsing speed and reduce the pressure of the original single server

Advantages and disadvantages of Nginx

yum could not be installed because the rpm package is missing

Then install using yum or up2date 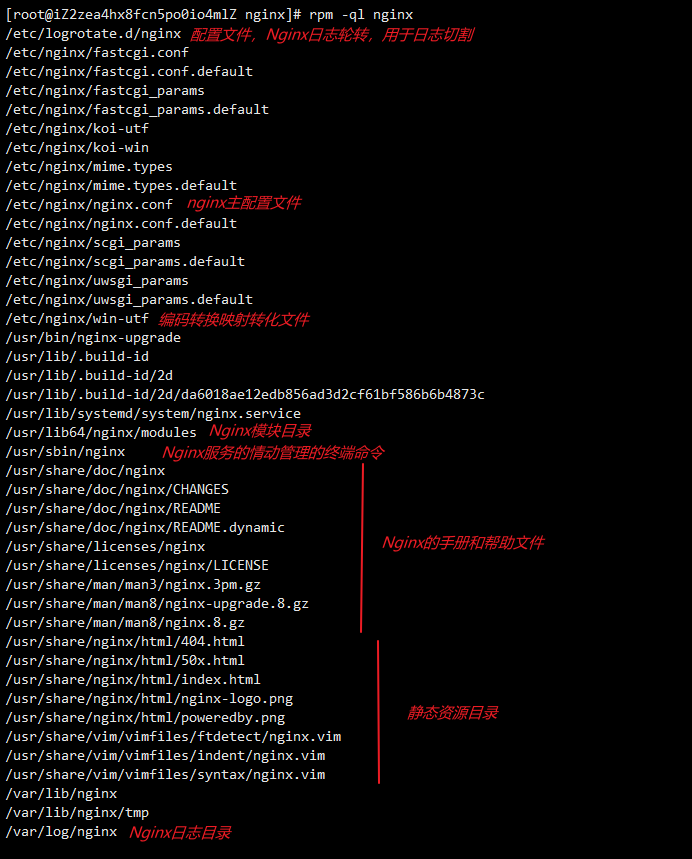 /usr/share/nginx/html / folder, usually static files are placed in this folder, or you can put them according to your own habits

Operate the firewall and open port 80

Nginx command, enter nginx -h in the console to see the complete command

systemctl is the main command of the linux system application management tool systemd. It is mainly used to manage the system. We can also use it to manage Nginx

The configuration file location of Nginx is / etc/nginx/nginx.conf

Install tomcat server in linux, and open firewall port 8080 to access the test

Example of dynamic and static separation

Different request forwarding is realized by specifying different suffix names through location. By setting the expires parameter, you can make the browser cache expiration time and reduce the requests and traffic with the server. The specific definition of expires: it is to set an expiration time for a resource, that is, it does not need to be verified by the server, but directly confirm whether it expires through the browser itself, so no additional traffic will be generated. This approach is well suited to resources that do not change frequently. (if a file is frequently updated, it is not recommended to use expires to cache it). I set 3d here, which means that there is no change in the last update time of the file compared with the server by accessing the URL and sending a request within these three days. It will not be fetched from the server, and the status code 304 will be returned. If it is modified, it will be downloaded directly from the server and the status code 200 will be returned

Nginx uses the Reactor event driven model to handle high concurrent IO. The successor component of Reactor model includes three basic units: event collector, event transmitter and event processor. Its core idea is to register all I/O events to be processed on an I/O multiplexer, and the main thread / process is blocked on the multiplexer. Once an I/O event arrives or is ready (file descriptor or Socket can be read and written), The multiplexer returns and distributes the I/O events registered to the response first to the corresponding processor 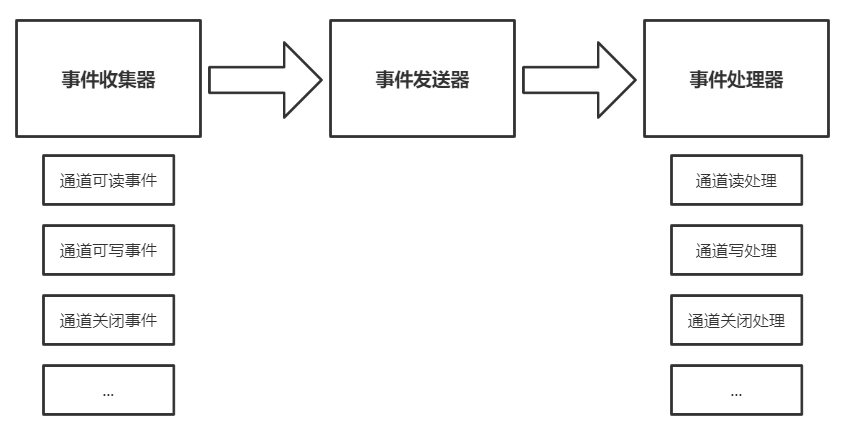 The event collector puts the IO events of each connection channel into a waiting time column and sends them to the corresponding events for processing through the event transmitter. The reason why the event collector can manage millions of connections at the same time is events, which is based on the "multiplexing IO" technology provided by the operating system. The common models include select and epoll

Two types of processes in Nginx

Generally speaking, Nginx will run in the background in daemon mode after startup. There are two types of background processes: one is called master process (equivalent to management process) and the other is called Worker process (work process) 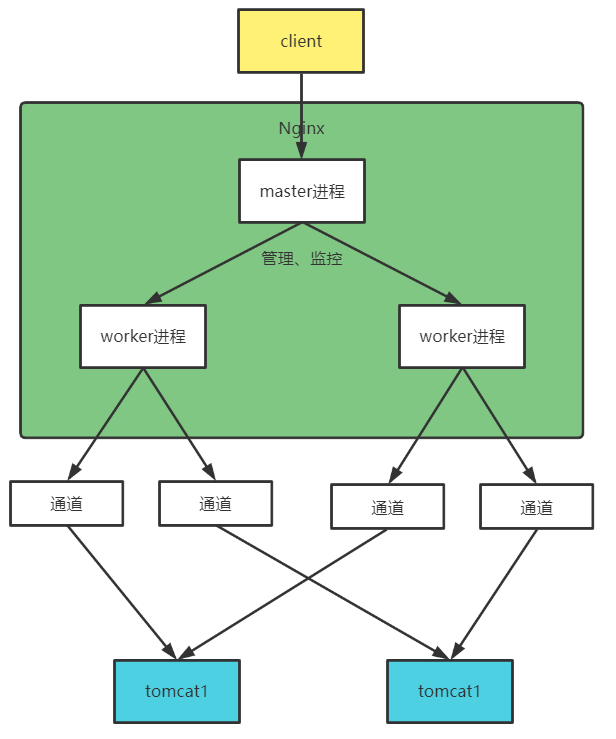 Nginx can be started in two ways:

In the field of communication, current limiting technology is used to control the rate of communication data sent and received by the network interface, so as to optimize the performance, reduce the delay and improve the bandwidth

For example: suppose that the QPS that an interface can resist is 10000, then 20000 requests come in. After passing through the current limiting module, 10000 requests will be put first, and the other requests will be blocked for a period of time. It is not easy to return 404 rudely and let the client retry. At the same time, it can play the role of traffic peak clipping

Why is Nginx high performance

How does Nginx handle requests

How to solve front-end cross domain problems with Nginx

What is cross domain?

How to solve cross domain problems?

JSON with Padding (JSON) is a new method of applying JSON

Similarly, adding a script tag to the page triggers the request for the specified address through the src attribute, so it can only be a get request

Modify header on PHP side