NMF can be applied in a wide range of fields because it has a good explanation of the local characteristics of things.

It is similar to Principal Component Analysis, but it is better than PCA in actual engineering environment. The idea is as follows:

For face recognition, LNMF is the most effective and prominent, which is more efficient and accurate than ordinary NMF.

Text occupies a large part in the information that human beings contact daily. In order to obtain the required information from a large number of text data faster and more accurately, the research on text information processing has not stopped. Text data is not only informative, but also generally unstructured. In addition, typical text data is usually processed by computer in the form of matrix. At this time, the data matrix has the characteristics of high-dimensional sparse. Therefore, another obstacle to the processing and analysis of large-scale text information is how to reduce the dimension of the original data. NMF algorithm is a new way to solve this problem.
NMF has successful application examples in mining user required data and text clustering research. Due to the high efficiency of NMF algorithm in processing text data, the famous commercial database software Oracle specially uses NMF algorithm to extract and classify text features in its 10th edition.
Why does NMF extract text information well? The reason is that the core problem of intelligent text processing is to represent the text in a way that can capture semantic or related information, but the traditional common analysis method is only to count words without considering other information. Unlike NMF, it can often achieve the effect of representing the correlation between parts of information, so as to obtain better processing results.

The Topic of Topic recognition is similar to probabilistic late semantic analysis:

Automatic speech recognition has always been the direction of computer scientists, and it is also the basic technology of intelligent application in the future. Speech also contains a large amount of data information. The process of speech recognition is also the process of processing these information.
NMF algorithm also provides us with a new method in this regard. In the existing applications, NMF algorithm successfully realizes effective speech feature extraction, and because of the rapidity of NMF algorithm, it is of great significance to realize the real-time speech recognition of the machine. There are also applications of music analysis using NMF method. The recognition of polyphonic music is a very difficult problem. Mitsubishi Research Institute and MIT (Massachusetts Institute of Technology) scientists cooperate to use NMF to recognize each tone from the polyphonic music playing and record them separately. The experimental results show that this method using NMF algorithm is not only simple, but also does not need to be based on knowledge base. 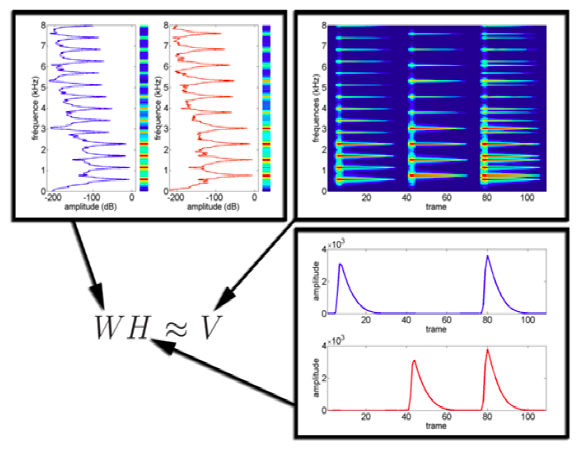 hidden markov models HMM is used to process time series data, such as audio and video:

NMF can segment file sequence data into different interest topics through threshold setting. The following is an example of mining movie clip structure: 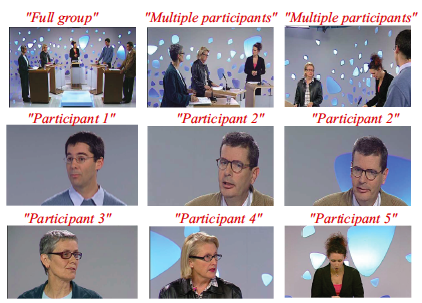 Similarly, based on the idea of temporal segmentation, there is such a speech processing project to segment the speech features of a paragraph spoken by many people and identify which person said each paragraph: 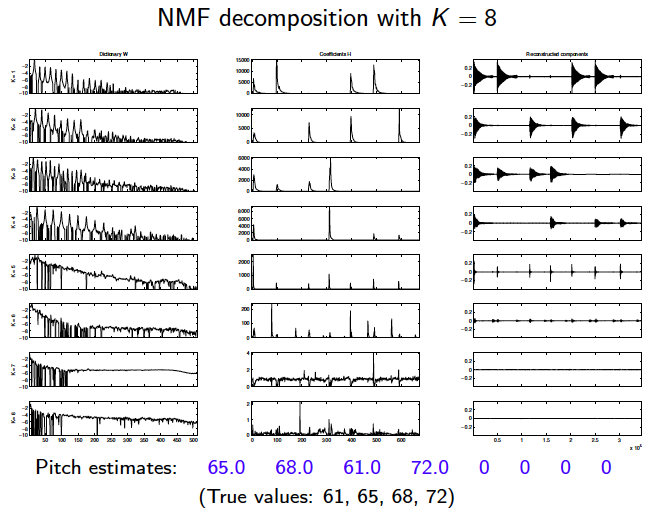 How to make the robot recognize the surrounding objects quickly and accurately is of great significance for robot research, because it is the basis for the robot to respond and act quickly. The robot obtains the image information of the surrounding environment through the sensor, which is also stored in the form of matrix. Some researchers have used NMF algorithm to realize the robot's rapid recognition of surrounding objects. According to the existing research data, the recognition accuracy has reached more than 80%.

In biomedical and chemical research, it is often necessary to analyze and process the experimental data with the help of computers. Often some complicated data will consume too much energy of researchers. NMF algorithm also provides a new efficient and fast way for the processing of these data. 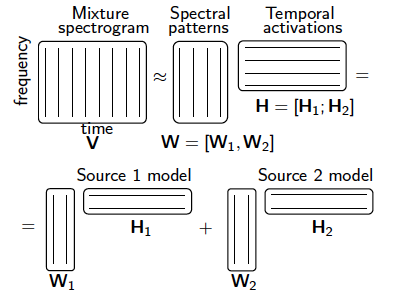 There are two collections: users and movies. Give each user's score on some movies, and hope to predict the user's score on other movies he hasn't seen, so that he can make recommendations according to the score. The relationship between users and movies can be represented by a matrix. Each column represents users, each row represents movies, and the value of each element represents the user's rating of movies that have been seen.
Related packages: from sklearn decomposition import NMF
The following is a brief introduction to the NMF based recommendation algorithm:
data
The name of the movie, using 10 movies:

NMF decomposition matrix of users and movies, where nmf_model is the NMF class, user_dis is the W matrix, item_dis is the H matrix and R is set to 2: 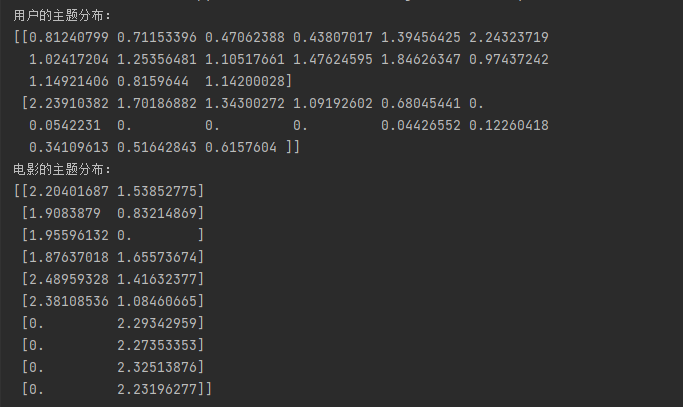 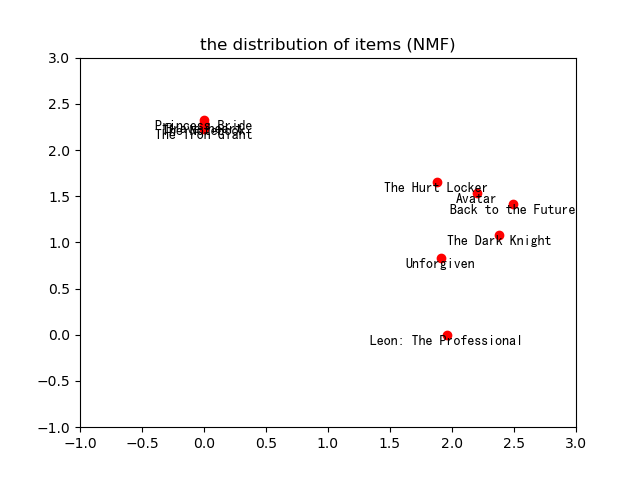 It can be seen from the above figure that the movie theme is divided. Movies can be divided into two categories by using KNN or other distance measurement algorithms, that is, n set according to the previous NMF matrix decomposition_ Components = 2. Back to this n_ The value of components is interpreted.

Let's look at the topic division of users: 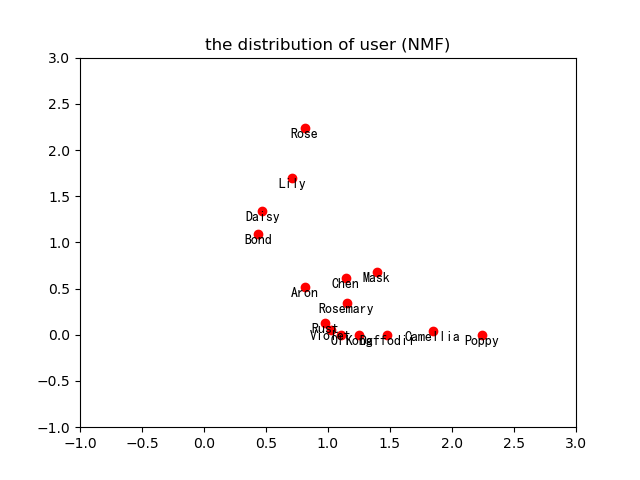 It can be seen from the above results that the movies recommended to the user 'Camellia' can include 'The Dark Knight', 'brake heart', 'The Notebook', 'Princess Bride'.
error
View the error after decomposition:

The above errors are

It is necessary to tolerate errors in matrix decomposition, but for the number of errors, we don't think the errors calculated by NMF are too obsessed. What's more, it depends on how many topics you set. Obviously, the more topics, the closer to the original matrix, the less error, so first determine the business requirements, and then define the number of topics that should be clustered.

In the above practice, clustering is used to extract the features of different users and items. The features can be regarded as the similarity of recommendations, so they can be used as recommendation algorithms. However, this is not recommended because the accuracy and recall of NMF are not significant compared with SVD.