The core of process oriented programming is process (pipeline thinking). Process is the step to solve the problem. Process oriented design is like carefully designing a pipeline and considering when to deal with what.
The advantage is that it greatly reduces the complexity of writing programs, and only needs to stack the code along the steps to be executed.
The disadvantage is: a set of pipeline or process is used to solve a problem, and the code affects the whole body.
Application scenario: once the scenario is completed, it rarely changes. Famous examples include Linux kernel, git, Apache HTTP Server, etc.

The core of object-oriented programming is the object (God thinking). To understand what the object is, we must regard ourselves as God. In God's eyes, all things in the world are objects, and those that do not exist can also be created.
The advantage is that it solves the scalability of the program. If you modify an object individually, it will be immediately reflected in the whole system. For example, it is easy to modify the characteristics and skills of a character parameter in the game.
Disadvantages: poor controllability, unable to predict the processing flow and results of problems to the process oriented programming pipeline. Once the object-oriented program starts, the problems are solved by the interaction between objects, and even God cannot predict the final results.

Know some nouns: class, object, instance, instantiation
Class: a class of things (people, dogs, tigers) with the same characteristics
Object / example: a specific thing (ah Hua next door, Wangcai downstairs)
Instantiation: the process of class - > object (this is not obvious in life, we will explain it later)

Instantiation: the class name is instantiated with parentheses, which will be triggered automatically__ init__ Function can be used to customize its own characteristics for each instance

Originally, we had only one Person class. In this process, we generated an egg object with its own specific name, attack power and health value.

self: automatically pass the object / instance itself to the__ init__ For the first parameter, you can also give him an individual name, but normal people don't do that.
Because you changed, others don't know

Exercise 1: output the following information at the terminal

Python does not support polymorphic writing in strongly typed languages such as Java and C#, but it is native polymorphic. Python advocates "duck type".

Hide the properties and implementation details of the object, and only provide public access.

[packaging principle]
1. Hide all contents that do not need to be provided externally;
2. Hide all attributes and provide public methods to access them.

Like java, python also has the concept of abstract class, but it also needs to be implemented with the help of modules. Abstract class is a special class. Its particularity is that it can only be inherited and cannot be instantiated

From a design perspective, if a class is abstracted from a real object, then the abstract class is based on class abstraction.
From the implementation point of view, the difference between abstract classes and ordinary classes is that there are abstract methods in abstract classes. This class can not be instantiated, but can only be inherited, and subclasses must implement abstract methods. This is a bit similar to the interface, but it is actually different. The answer will be revealed soon

2. Implementation of the method
In abstract classes, we can make basic implementations of some abstract methods;
In the interface class, any method is only a specification, and the specific functions need to be implemented by subclasses

Object oriented composite usage
In addition to inheritance, there is another important way of software reuse, that is, composition
Composition refers to taking objects of another class as data attributes in one class, which is called class composition

The relationship between classes and combined classes is established in the way of composition. It is a kind of "yes" relationship. For example, professors have birthdays and teach python courses

When there are significant differences between classes, and the smaller class is the component required by the larger class, it is better to use composition

In python, the attribute is hidden (set to private) by starting with a double underscore

Features of this automatic deformation:

1. Defined in class__ X can only be used internally, such as self__ x. The reference is the result of deformation.
2. This deformation is actually aimed at the external deformation, which cannot be passed externally__ The name x is accessible.
3. Defined in subclass__ X does not override the definition of the parent class__ x. Because the subclass becomes:_ Subclass name__ x. The parent class changes into:_ Parent class name__ x. That is, when the attribute at the beginning of the double sliding line is inherited to the subclass, the subclass cannot be overwritten.

The problems needing attention in this deformation are:
1. This mechanism does not really restrict us from directly accessing attributes from the outside. We can spell the name after knowing the class name and attribute name:_ Class name__ Property, and then you can access it, such as a_ A__ N
2. The deformation process only takes effect inside the class. The assignment operation after definition will not deform
In inheritance, if the parent class does not want the child class to override its own method, it can define the method as private 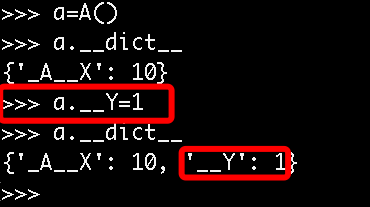 Encapsulation is to clearly distinguish the inside and outside, so that the class implementer can modify the things in the encapsulation without affecting the code of the external caller; External users only know one interface (function). As long as the interface (function) name and parameters remain unchanged, the user's code never needs to be changed. This provides a good basis for cooperation -- in other words, code changes are not a concern as long as the basic interface convention remains unchanged.