On the sorting of bert

Input and output of bert model 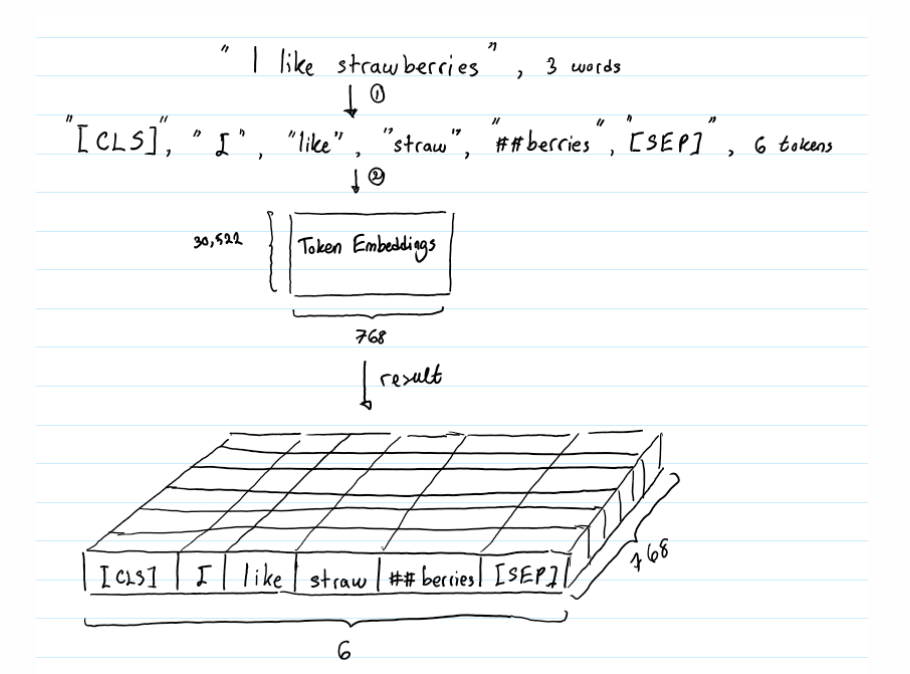 BERT Medium Position Embedding and Transformer dissimilarity, transormer The Chinese formula directly uses the formula to calculate the value of the corresponding dimension. stay BERT Learning is to learn. for instance d_model If the size is 512, each sentence will generate one[0,1,2,...511]A one-dimensional array of, and then repeat batch Times, so the actual input is[batch,d_model]，Send it to one_hot The specific coding process and Token Embedding Same, and then the final output is[batch,seq_len,d_model]. and Token Embedding The output dimensions are the same 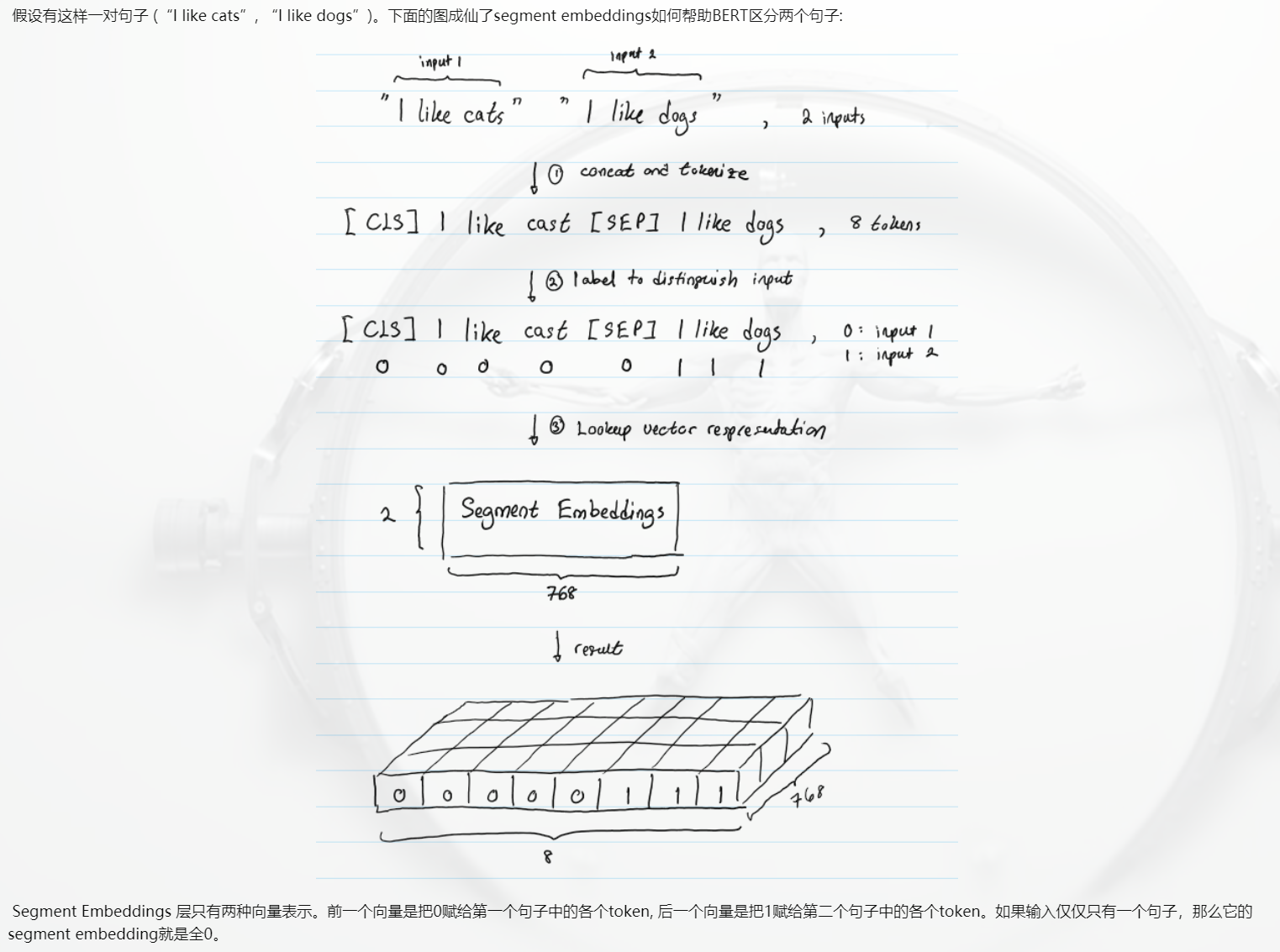 BasicTokenizerIt is a preliminary word splitter. For a character string to be segmented, the process is roughly converted to unicode-->Remove all kinds of strange characters-->Processing Chinese(Judge whether it is Chinese (Chinese is separated by characters)-->Space participle-->Remove redundant characters and punctuation word segmentation-->Space participle again

WordpieceTokenizerYes BT On the basis of the results, the sub words are segmented again( subword，with ## The vocabulary was introduced at this time. This class has only two methods: an initialization method__init__(self, vocab, unk_token="[UNK]", max_input_chars_per_word=200)，A word segmentation methodtokenize(self, text). tokenize(self, text): This method is the main word segmentation method. The general idea of word segmentation is to split a word into multiple sub words in order from left to right, and each sub word is as long as possible. according to Source code This method is called greedy longest-match-first algorithm，Greedy longest first matching algorithm. 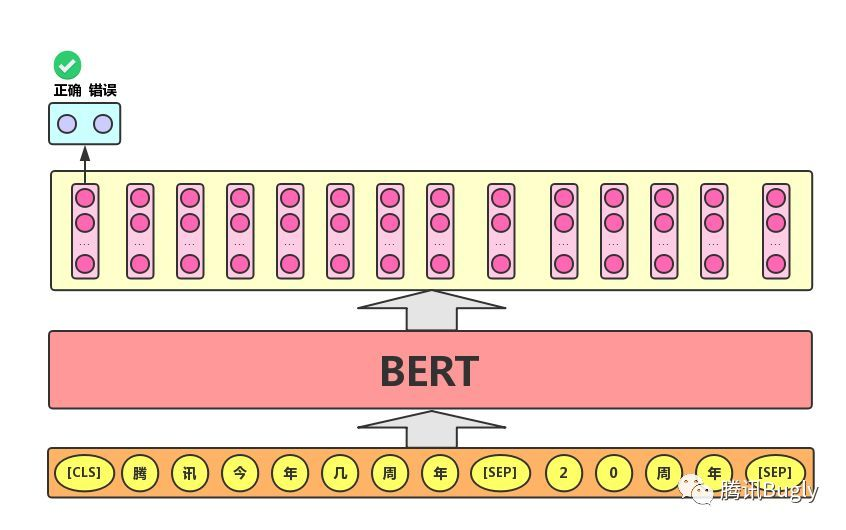 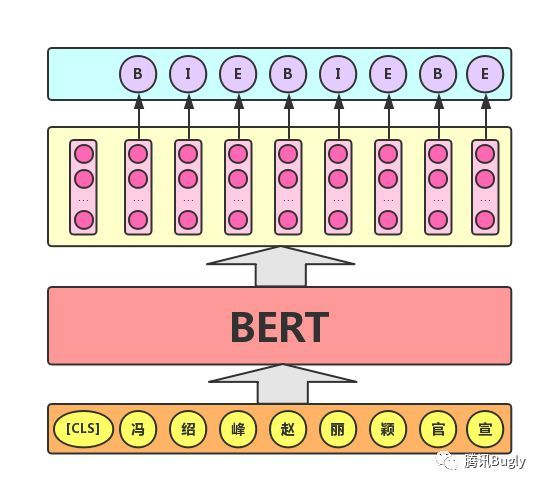 Get the output of bert model and use   model.get_sequence_output() and model.get_pooled_output()   Two methods.

In BERT's Masked LM training task, 15% of the words in the corpus will be replaced with [MASK] token, and then predicted at the last layer. However, there will be no [MASK] token in downstream tasks, resulting in inconsistency between pre training and fine tune. In order to reduce the impact of inconsistency on the model, in the replaced 15% corpus:

2. 10% of tokens will be replaced by random tokens

3. 10% of tokens will remain unchanged but need to be predicted

Substitution in the first point: it is the main part of Masked LM, which can fuse true two-way semantic information without divulging label;

Random substitution of the second point: because the token bit that needs to be randomly replaced at the last layer is needed to predict its real word, and the model does not know that the token bit is randomly replaced, it forces the model to learn the representation of a global context on each word as much as possible, so it can also enable BERT to obtain better context related word vectors (this is the most important feature of solving polysemy);

The third point remains unchanged: that is, 10% of the cases are leaked (accounting for 15% * 10% = 1.5% of all words). This can give the model a certain bias, which is equivalent to an additional reward, and pull the model's representation of words to the real representation of words (at this time, the input layer is the real embedding of the word to be predicted. The embedding obtained at the position of the word in the output layer is obtained after layers of self attention. Some of the input embedding information is still retained in this part of embedding, which is the additional reward brought by inputting a certain proportion of real words, which will eventually make the output vector of the model There is an offset towards the real embedding of the input layer). If all mask s are used, the model only needs to ensure the accurate classification of the output layer and does not care about the vector representation of the output layer. Therefore, the final vector output effect may not be good.

Among the randomly selected 15% words, replace with any word with a probability of 10% to predict the correct word, which is equivalent to the text error correction task, which gives a certain text error correction ability to the BERT model; among the randomly selected 15% words, the probability of 10% remains unchanged, which alleviates the problem of input mismatch between finetune and pre training (there is a mask in the input sentences during pre training, but there is a complete sentence during finetune, that is, the input does not match.)

Self Attention: for the input text, we need to enhance the semantic vector representation of each word. Therefore, we take each word as a Query and weight the semantic information of all words in the text to obtain the enhanced semantic vector of each word, as shown in the figure below. In this case, the vector representations of Query, Key and Value all come from the same input text. Therefore, the Attention mechanism is also called self Attention 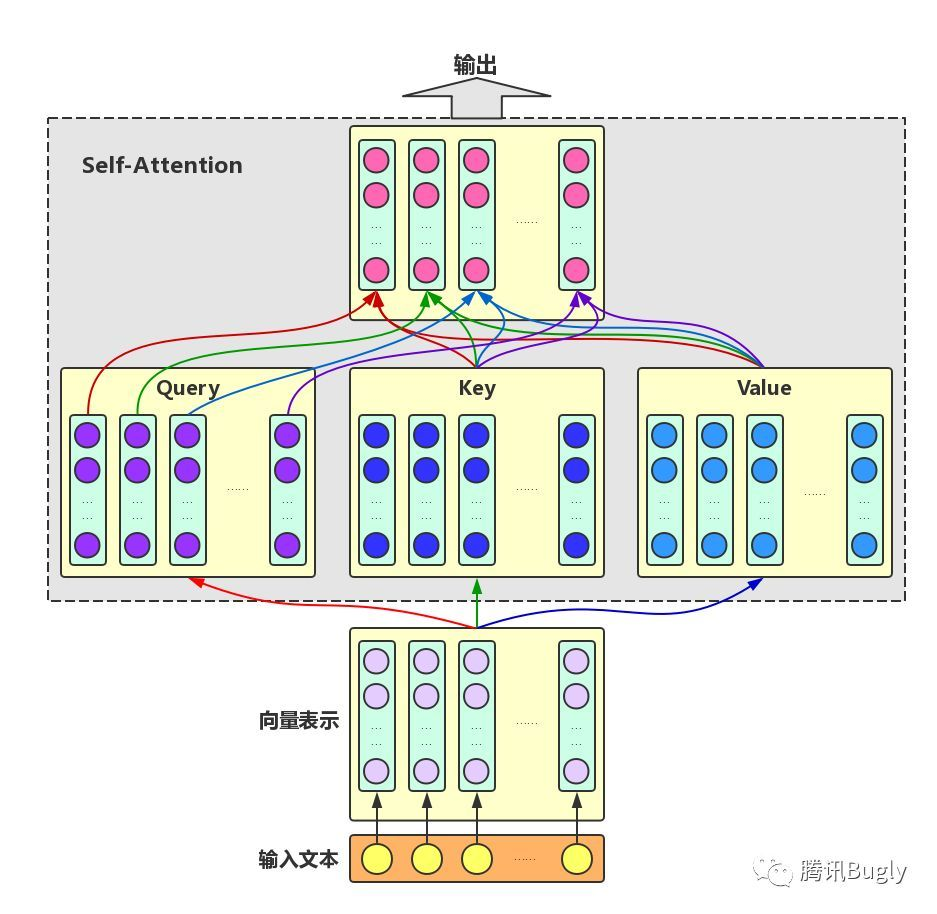 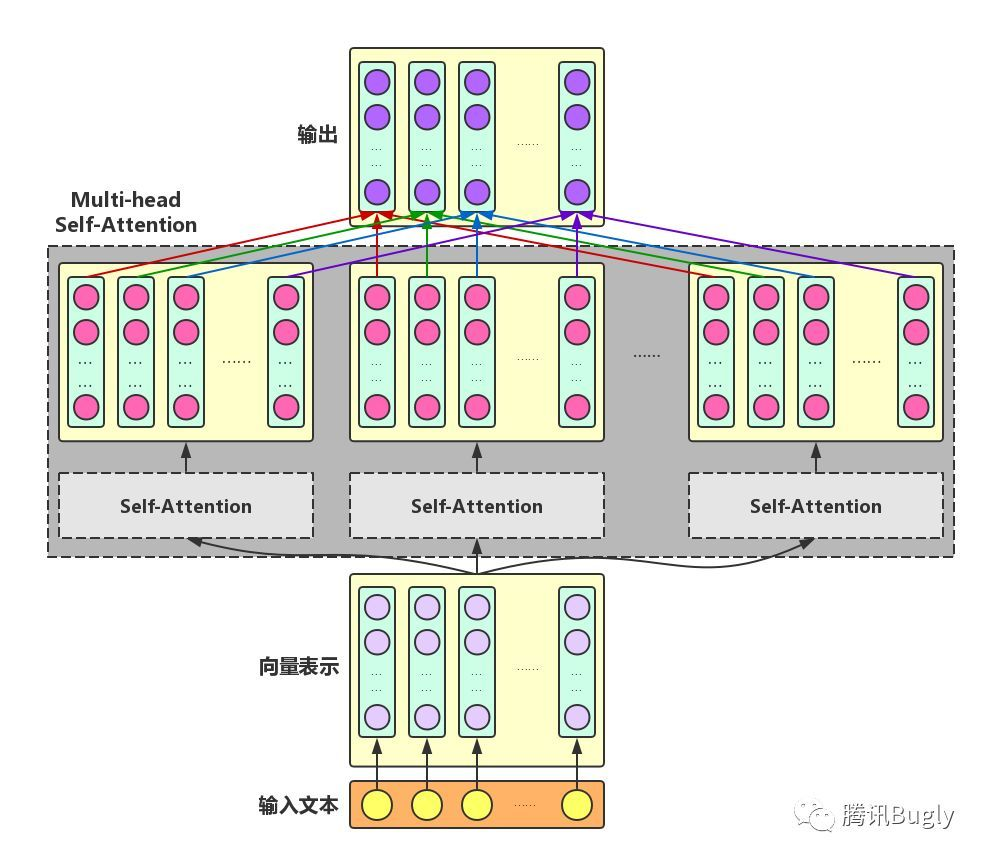 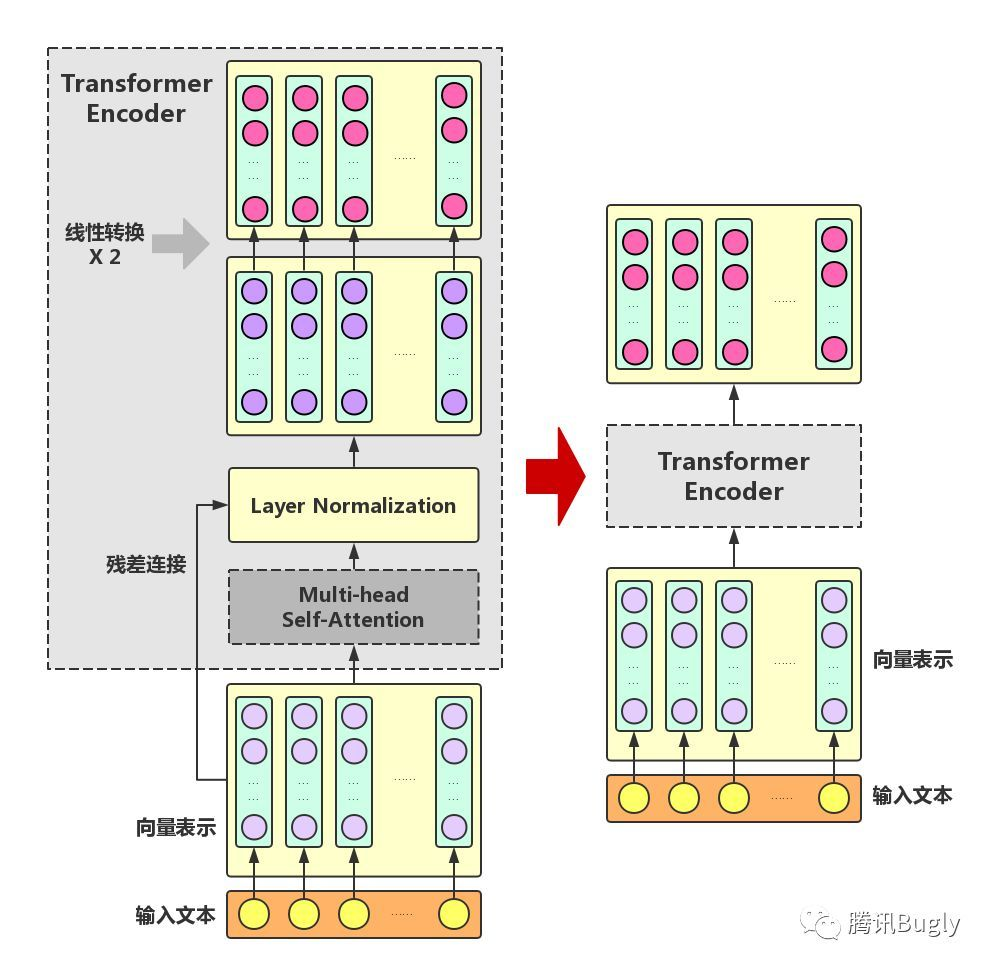 BERT uses transformer encoder to encode input. The self attention mechanism in encoder uses the token of its context when encoding a token, and "using context at the same time" is the embodiment of two-way