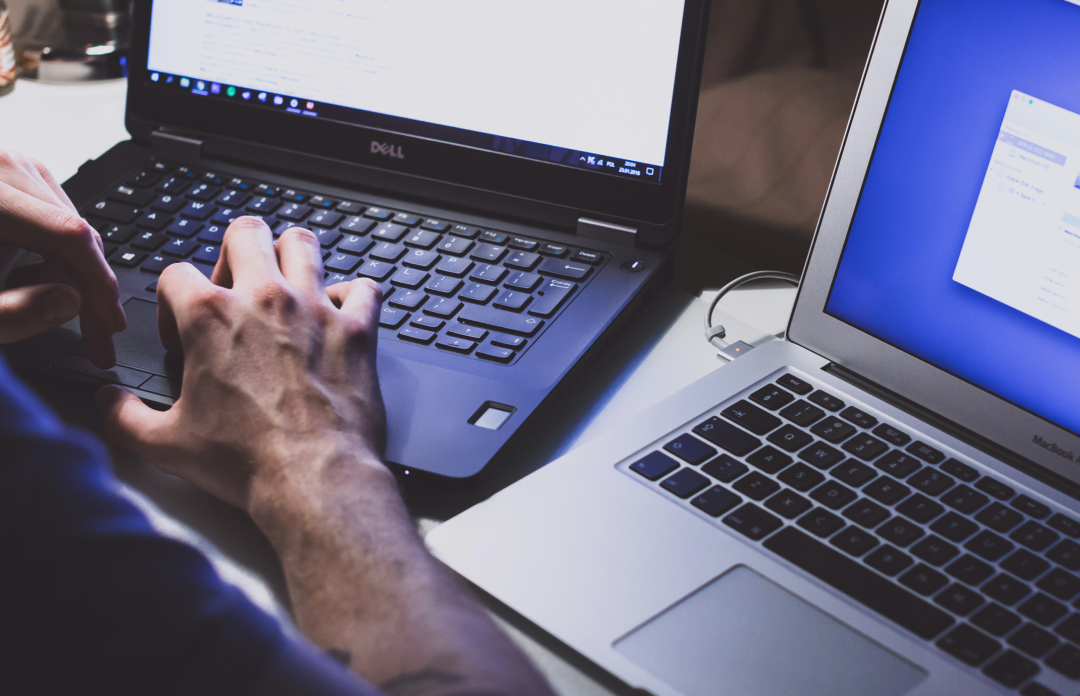 Introduction: in order to cope with the complex interaction of video editing tools, Toka iOS draws lessons from the design idea of Flux architecture mode and the topology concept of directed acyclic graph, centralizes the event management, and realizes a comfortable, refreshing and easy to control "one-way flow" mode from the development experience; In this scheduling mode, the change and tracking of events become clear and predictable, and significantly increase the scalability of the business.

The full text is 6882 words and the expected reading time is 18 minutes.

Video editing tool applications often have complex interactions. Most operations are carried out on the same main interface, and there are many view areas (preview area, axis area, undo redo, operation panel, etc.) in this interface. Each area should not only receive user gestures, but also update the status with user operations. At the same time, in addition to the main scene editing function, it also supports other characteristic functions, such as general editing, quick editing, theme template, etc. all need to use the preview and editing functions; Therefore, there are high requirements for the scalability and reusability of the architecture.

After investigation, Toka iOS finally learned from the design idea of Flux architecture mode and the topology concept of directed acyclic graph to centrally manage events, and realized a comfortable, refreshing and easy to control "one-way flow" mode from the development experience; In this scheduling mode, the change and tracking of events become clear and predictable, and significantly increase the scalability of the business.

The general editing of DKA and many derivative tools and functions need to rely on basic capabilities such as preview and material editing.

For example, the following functions depend on the same set of preview and playback logic. These basic capabilities need to be abstracted as a base controller. 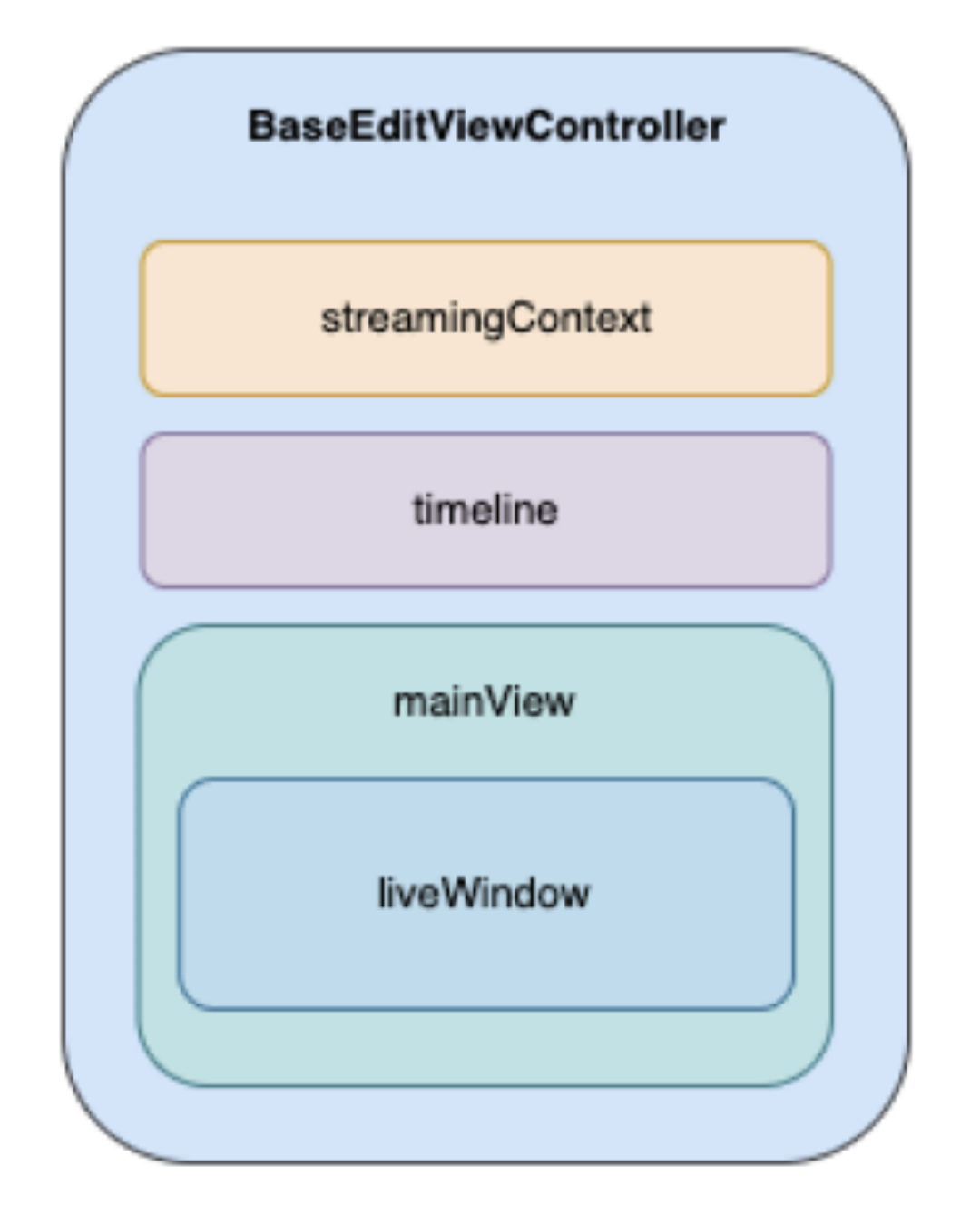 The problem of preview playback reuse has been solved. How to add various material editing functions to this set of logic, such as stickers, text, filters and so on, decouple these functions from VC, and finally achieve the purpose of reuse?

Finally, we use the plug-in design concept to abstract each sub function into a plugin, and directly call the dependency layer to write the attributes of controller, view, timeline, streamingContext and liveWindow, which will be used in 90% of the scenarios, and directly assign them to the plugin through weak.

As long as the protocol is implemented and the plugin is added by calling the add: method of baseVC, the corresponding plugin will get the corresponding attribute to call, avoiding the use of singleton or callback to VC through layers.

plugin is an intermediate layer between specific functions and VC. It can accept VC life cycle events, preview playback events, get key objects in VC, and call all internal public interfaces of VC. As an independent sub function unit inserted in VC, it has the ability of editing, material, network UI interaction and so on.

The plugin is divided into service layer and UI layer. At the beginning of design, the plugin based on this architecture can not only be used in Duca app, but also other apps in the plant can access the plugin immediately with little workload.

All functions can be distributed into plug-ins, assembled and reused on demand.

At the same time, not only a single plugin, but also a combination of multiple plugins can be output. Taking the cover function as an example, cover editing is a controller organized by coverVC, which contains multiple plugins, such as existing text plugins and sticker plugins; In addition to being an independent functional application, coverVC is packaged into a cover plugin, which can be integrated into the general clip VC with only a small amount of data docking code (the general clip data docking plugin in the above figure) and assembled like Lego blocks.

Due to the complexity of interaction, the editing tool app is very dependent on state update. Generally speaking, the following methods are used to notify object state changes in iOS development:

These four methods can manage state changes, but there are some problems. Delegate and Block often create strong dependencies between components; KVO and Notifications will create invisible dependencies. If some important messages are removed or changed, they are difficult to find, thus reducing the stability of the application.

Even Apple's MVC model only advocates the separation of the data layer and its presentation layer, without providing any tool code and guiding architecture.

So we learn from the idea of flux architecture mode. Flux is a very lightweight architecture mode. Facebook uses it for client Web applications to avoid MVC and support one-way data flow (the MVC data flow diagram of the front end listed later). The core idea is centralized control, which allows all requests and changes to be issued only through action s and uniformly distributed by the dispatcher. The advantage is that the View can be kept highly concise. It does not need to care about too much logic, but only about the incoming data. Centralization also controls all data, which can facilitate query and positioning in case of problems.

As can be seen from the above figure, Flux is characterized by one-way data flow: 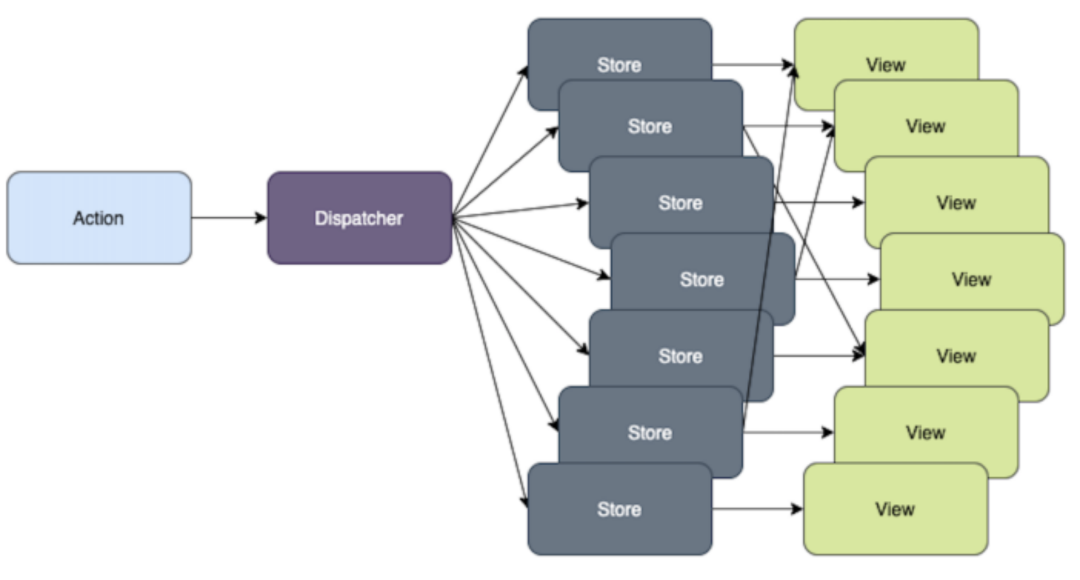 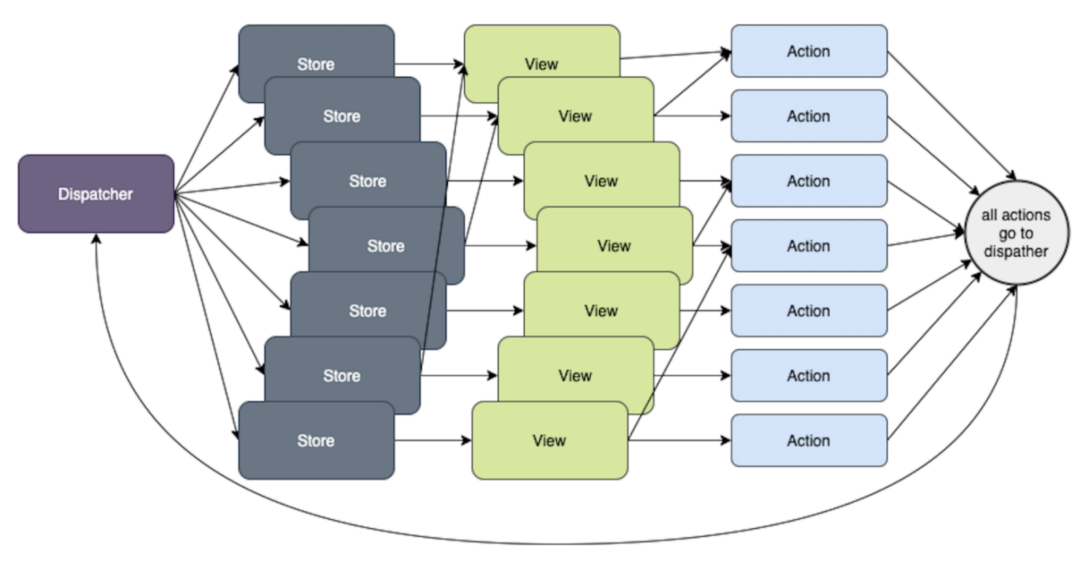 Compared with MVC mode, Flux has more arrows and icons, but there is a key difference: all arrows point to one direction and form an event transmission chain in the whole system.

There are two states: 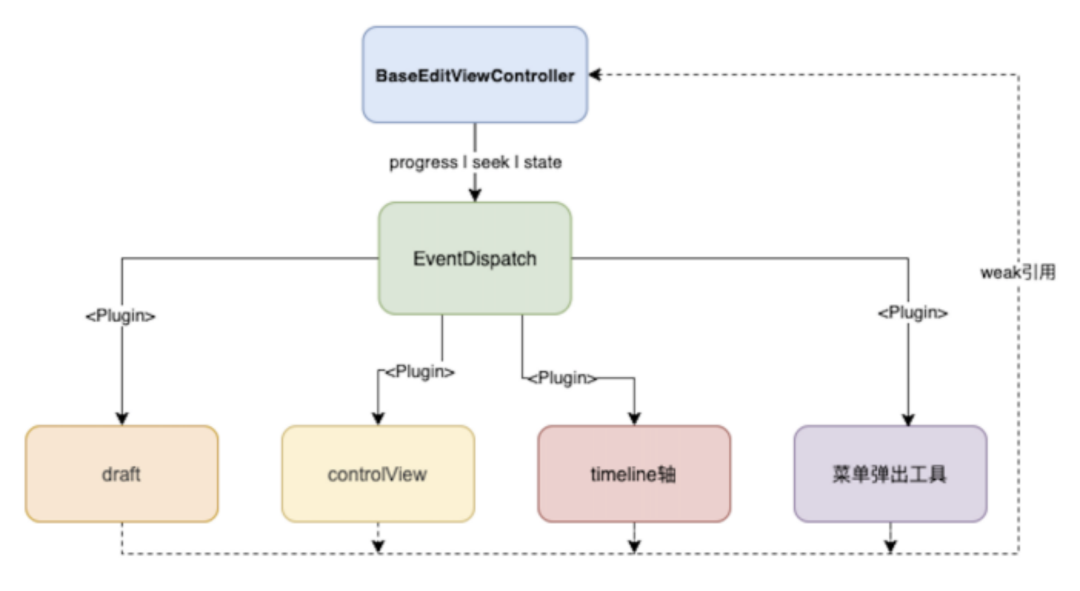 The controller holds the object dispatcher capable of EventDispatch and passes events through this dispatcher.

The event is distributed to the internal objects of subscribers through generic multi proxy (addPlugin: add subscribers internally in the above code Block). Of course, it can also be implemented by registering Block.

Declare that a protocol inherits the capabilities to be distributed

The above BDTZEditActionSubscriber protocol is used for event transmission between plugin s.

BDTZEditAction is an empty protocol, which can be inherited by any class to describe any information you want to pass. Combined with the characteristics of editing tools (although the interaction is complex, but the material types and operations are limited), all States can be described with only a small number of actions. At present, we use these events to describe the operations of adding, deleting, moving, clipping and saving some columns of the draft. Let's take the selected action as an example:

When APlugin sends a selected event, BPlugin and CPlugin will receive this event and make corresponding state changes.

When the sticker in the preview area is selected, the axis area will also be selected, and the bottom area will be switched to a three-level menu** After an action is dispatched, all plugins will receive it, and the plugins interested in this action will make corresponding state changes.
** 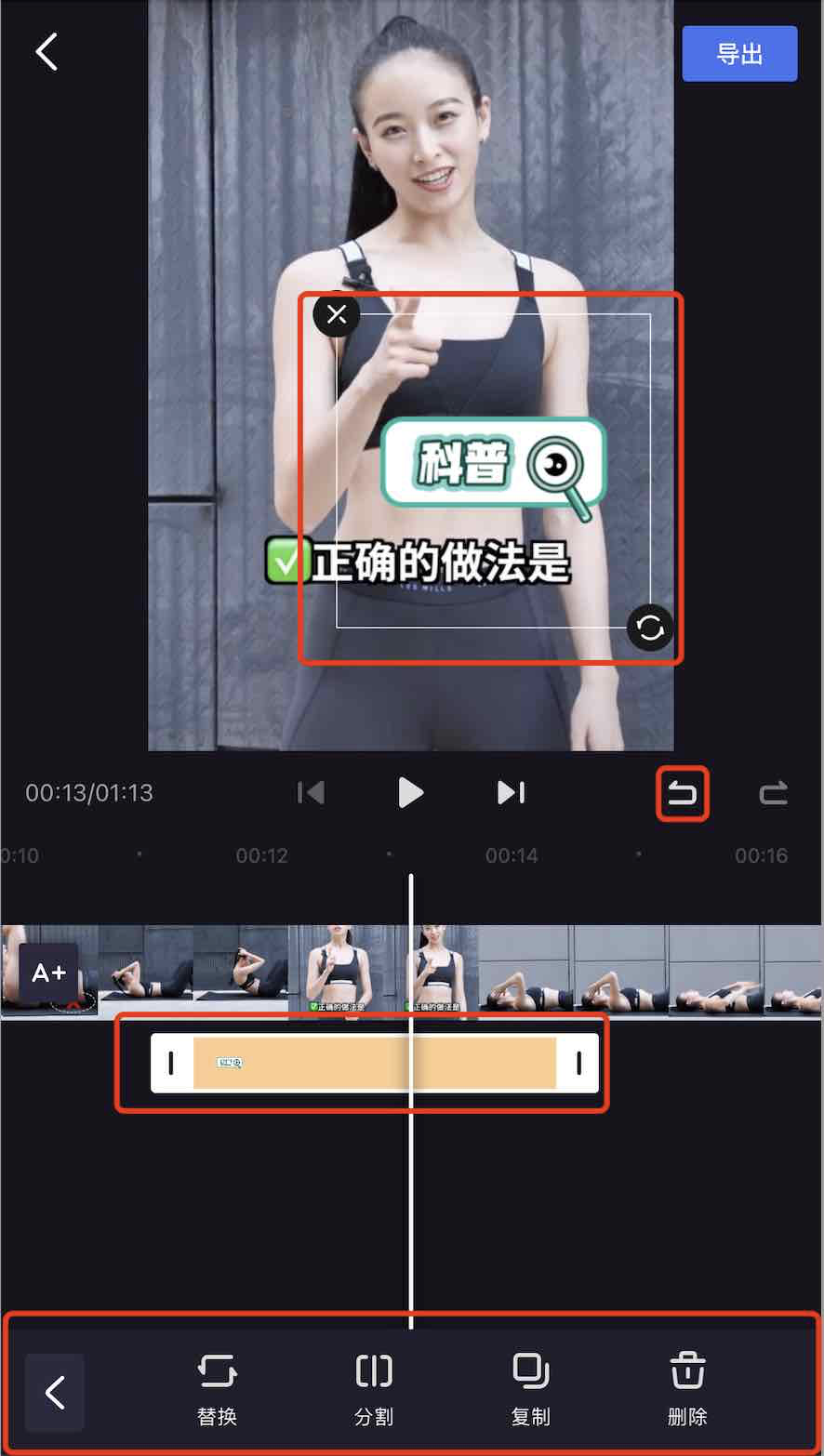 iOS also has a ReSwift framework designed according to the idea of flux, but if it is developed using pure flux mode, the disadvantages are also very obvious:

For us, adopting the design concept of Flux mode is more important than a specific implementation framework. According to the characteristics of Toka business, we just take its idea and use a single-layer structure to manage the relationship and event transmission between ViewController and plugin abstraction, without adding View to the hierarchy. Any architecture such as MVC and MVVM can be used in the plugin, Just unify the communication mode.

The above is just a simple example to introduce the application of editing tools in Flux thought. However, in practical use, it should also consider:

The official account of Baidu technology is on the line.