1.1 relationship between procedure and process

process
1. Program code running in CPU and memory
2. Dynamically executed code
3. Parent and child processes (each program can create one or more processes)
4. It is the process of program operation, with dynamic life cycle and operation state

thread
1. It is the smallest unit that the operating system can perform operation scheduling. It is included in the process and is the actual operation unit in the process
2. A process has at least one execution thread
3. Threads are also called lightweight processes
4. A thread is an internal part of a process

Relationship between program, process and thread
Thread is included in the process. It is not only the actual operation unit in the process, but also the basic unit that can run independently in the operating system. It is also called lightweight process
Multiple threads can be concurrent in a process, and each thread can execute different tasks in parallel, while the processes we see in the task manager are generated by the application we download
Of course, an application can also contain multiple processes 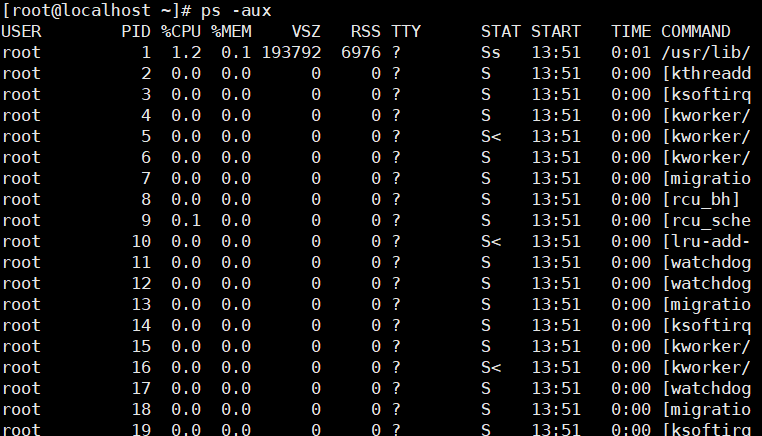 Common option combinations:
In the above output information, the first line list title, in which the meaning of each field is described as follows
USER: the name of the USER account that started the process

PID: the digital ID number of the process in the system, which is unique in the current system

VSZ: amount of virtual memory used by the process (KB)

RSS: amount of physical memory occupied by this process (KB)

TTY: indicates which terminal the process runs on. Processes that are not started from the terminal are displayed as?
Jane said: pts is the remote login terminal ctrl+ALT F1-F6 tty1 image interface 2 and 6 character interface? The process executed by the system itself

STAT: the state of the process (D: non interruptible sleep state: R: running state; S: in sleep state and can be awakened; T: stop state, which may be suspended in the background or the process is in tracking and debugging state: Z: Zombie process, the process has been suspended, but some programs are still in memory)

R: The program is currently in operation or can be operated

Z: The program should have been terminated, but its parent program cannot normally terminate it, resulting in the non interruptible state of zombie (zombie) program state D

They mean the following:
<: indicates that the process is running on a high priority

N: Indicates that the process is running on a low priority

50: Indicates that the process has pages locked in memory

s: Indicates that the process is a control process

l: Indicates that the process is multithreaded

+: indicates that the current process is running in the foreground

START: the time when the process was started

COMMAND: the name of the COMMAND that started the process

Explanation of each column:
F: The system token assigned by the kernel to the process.

S: Status of the process

UID: the user who started these processes

PID: process ID of the process

PPID: the process number of the parent process (if the process was started by another process)

PRI: priority of the process (the higher the number, the lower the priority)

NI: the humility value is used to participate in the decision of priority

ADDR: memory address of the process

SZ: the approximate size of the swap space required if the process is swapped out

If WCHAN: the name of the process in the sleep system

TIME: the cumulative CPU TIME required to run the process 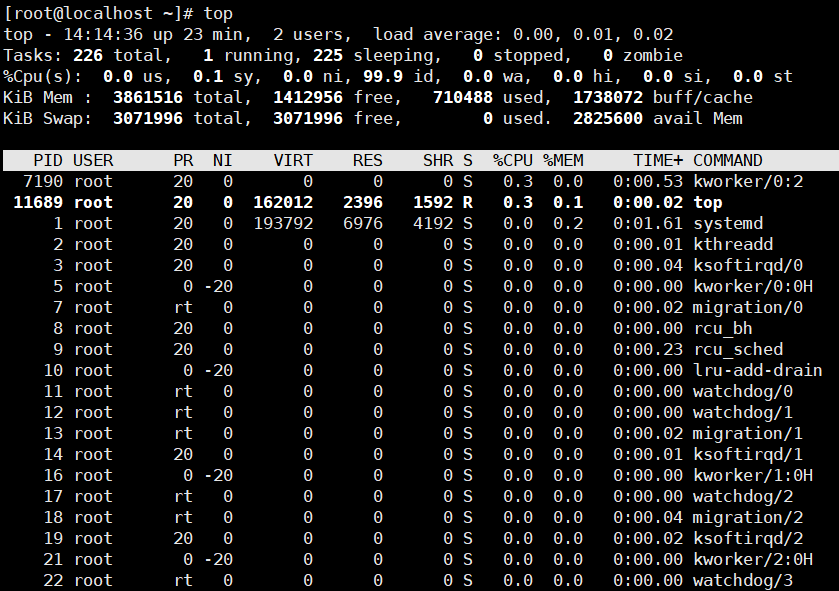 1 running the number of running processes

0 stopped the number of processes stopped

0.0 st (steal) virtualization occupancy. The percentage of idle CPU depends on the% id

st: the time when the virtual machine steals the physical

1738072k buff/cache is used as the amount of memory for the kernel cache. And free -k

What is the total available memory of 2825600 available MEM

PR priority (dynamically adjusted by the kernel), the user cannot

RES (resident memory usage) is the physical memory used by the process. Actual practical memory (ps marked as RSS) RES: resident memory usage
1. The amount of memory currently used by the process, excluding swap out
2. Share containing other processes
3. If you apply for 100m of memory and actually use 10m, it will only increase by 10m, which is opposite to VIRT
4. As for the memory occupied by the library, it only counts the memory occupied by the loaded library files

At least one process can be started by the user manually entering the command or the path of the executable program. According to whether the process needs to occupy the current command terminal, manual startup can be divided into foreground startup and background startup.
Foreground start: the user enters a command and directly executes the program.

Background startup: add the "&" symbol at the end of the command line

1. Use the at command to set a one-time scheduled task

2. Use the crontab command to set periodic scheduled tasks

3.3 front and back scheduling of process

Ctrl+z
Suspend the current process, that is, call it into the background and stop execution

jobs command
View a list of tasks in the background

fg command
To restore the background process to the foreground, you can specify the task sequence number

Use the fg command (ForeGround, ForeGround) to restore the background task to the ForeGround

Unless there is only one task in the background, both bg and fg commands need to specify the task number of the background process as a parameter.

For example, execute the following "fg 1" command to transfer the wget process suspended to the background back to the foreground for execution

Use the pkill command to terminate the process
Using pkill command, a specific process can be terminated according to the name of the process, the user running the process, the terminal where the process is located and other attributes. Most options are basically similar to pgrep command, such as "- U" (specified user), "- t" (specified terminal) and other options, which are very convenient to use. For example, to terminate processes started by the user lu, including logging into the Shell, you can do the following

at command
One time scheduled task

To delete the at task with the specified number, you can use the atrm command. The deleted at task will not be executed and will not be displayed in the display result of atq command, but the executed task cannot be deleted. The specific operations are as follows:

Use of crontab command options

3. Set scheduled tasks with the at command