In this article, we will see the limitations of Prometheus monitoring technology stack and why moving to Thanos based technology stack can improve indicator retention and reduce overall infrastructure costs.

The content for this presentation can be obtained at the link below and submitted to their respective licenses.

When deploying the Kubernetes infrastructure for our customers, it is standard practice to deploy the monitoring technology stack on each cluster. This stack usually consists of several components:

The simplified architecture is as follows: 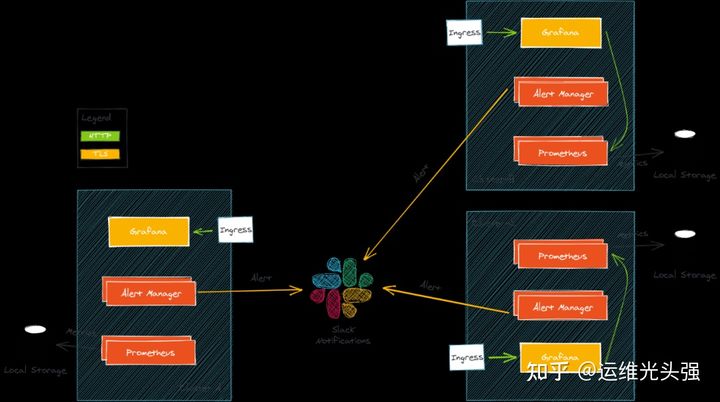 This architecture has some considerations. When the number of clusters from which you want to obtain indicators increases, its scalability and scalability are not very good.

In this setting, each cluster has its own Grafana and its own set of dashboards, which is very troublesome to maintain.

Prometheus stores indicator data on disk. You must choose between storage space and indicator retention time. If you want to store data for a long time and run on a cloud provider, the cost of block storage may be high if you store TB of data. Similarly, in a production environment, Prometheus often uses replication or fragmentation or both, which can double or even quadruple storage requirements.

Prometheus endpoints can be exposed on an external network and added to a single Grafana as a data source. You only need to use TLS or TLS and basic authentication on the Prometheus external endpoint to achieve security. The disadvantage of this solution is that it cannot be calculated based on different data sources.

Prometheus Federation allows you to grab Prometheus from Prometheus. This solution works well when you don't grab a lot of indicator data. In terms of scale, if the capture duration of all Prometheus targets is longer than the capture interval, you may encounter some serious problems.

Although remote writing is a solution (also implemented by Thanos receiver), we will not discuss the "push metrics" section in this article. You can read about the pros and cons of push metrics here [1]. It is recommended to use indicators as a last resort when you do not trust multiple clusters or tenants (for example, when building Prometheus as a service provider). Anyway, this may be the subject of future articles, but we will focus on crawling here.

Thanos is an "open source, highly available Prometheus system with long-term storage capacity". Many well-known companies are using thanos, which is also part of the CNCF incubation project.

A major feature of Thanos is that it allows "unlimited" storage space. By using object storage (such as S3), almost every cloud provider provides object storage. If you run in a prerequisite environment, object storage can be provided through solutions such as rook or minio.

How does it work?

Thanos and Prometheus fight side by side. It is common to upgrade from Prometheus to thanos.

Thanos is divided into several components, each component has a target (each service should be like this:), and components communicate through gRPC.

Thanos runs with Prometheus (there is a side car) and outputs Prometheus metrics to an object repository every 2 hours. This makes Prometheus almost stateless. Prometheus still keeps 2-hour metrics in memory, so in case of downtime, you may still lose 2-hour metrics (this problem should be handled by your Prometheus settings, using HA / shards instead of thanos).

Thanos sidecar, together with the Prometheus operator and the Kube Prometheus stack, can be easily deployed. This component acts as a store for thanos queries.

Thanos comparator is a singleton (it is not scalable), which is responsible for compressing and reducing indicators stored in object storage. Downsampling is the relaxation of index granularity over time. For example, you may want to keep your indicator for 2 or 3 years, but you don't need as many data points as yesterday's indicator. This is the function of the compressor, which can save bytes on object storage, so as to save costs.

Thanos query is the main component of thanos. It is the central point to send PromQL query to thanos. Thanos query exposes a Prometheus compatible endpoint. It then assigns the query to all "stores". Remember, the Store can be any other thanos component that provides metrics. Thanos queries can send queries to another thanos query (they can be stacked).

It is also responsible for deduplication of the same indicators from different stores or Prometheus. For example, if you have a metric value in Prometheus and also in the object Store, Thanos Query can de duplicate the metric value. In the case of Prometheus HA settings, data deduplication is also based on Prometheus replicas and Shards.

As its name implies, the Thanos query front end is the front end of Thanos query. Its goal is to split large queries into multiple smaller queries and cache query results (in memory or memcached). There are other components, such as receiving Thanos in the case of remote writing, but this is still not the subject of this article.

There are many ways to deploy these components to multiple Kubernetes clusters. According to different use cases, some methods are better than others. We can't give a detailed introduction here. 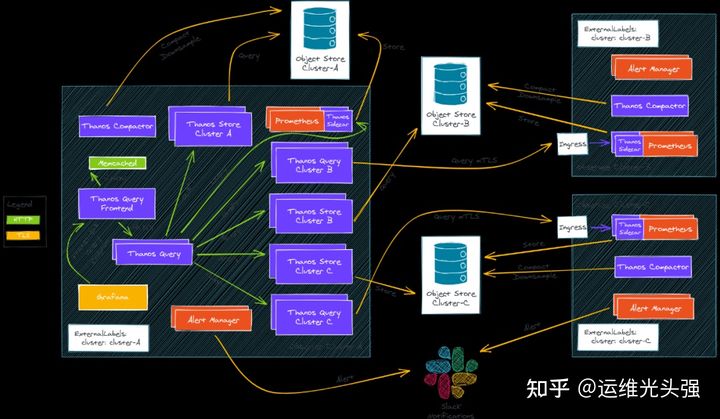 Our example is running on AWS. Two clusters are deployed using tEKS[2]. Our all in one solution deploys the production ready EKS cluster on AWS:

Everything was planned in our terrain kubernetes addons repository.

The directory structure in Thanos demo folder is as follows:

This allows DRY (don't repeat yourself) infrastructure and can easily expand the number of AWS accounts, regions, and clusters.

The observer cluster is our main cluster. We will query other clusters from it:

Generate a CA certificate for the observer cluster:

Let's check what's running on the cluster. With regard to observers, we have:

Our TLS query should be able to query the metrics of the observed cluster. Let's look at their behavior:

Therefore, this query pods can query my other clusters. If we check the Web, we can see the storage:

Great, but I only have one storage. Remember we said that queries can be stacked together? In our observer cluster, we have a standard http query that can query other components in the architecture diagram.

Here we can see that all storage has been added to our central query: 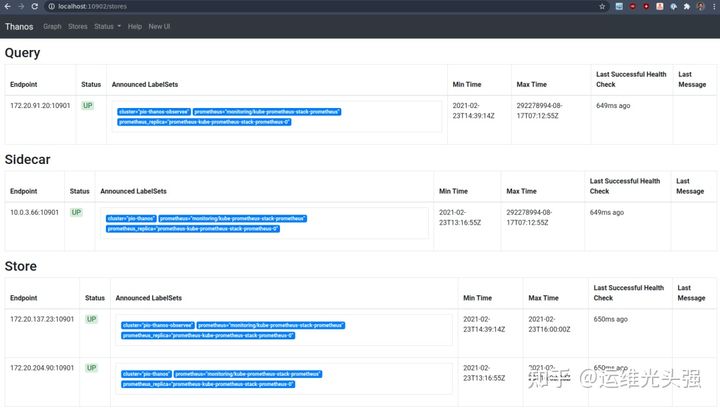 Finally, we can go to Grafana to see how the default Kubernetes dashboard is compatible with multiple clusters.

Thanos is a very complex system with many mobile parts. We didn't study the specific custom configuration in depth because it will take too much time.

We provide a fairly complete AWS implementation in the tEKS repository, which abstracts a lot of complexity (mainly the mTLS part) and allows a lot of customization. You can also use the terrain kubernetes addons module as a stand-alone component. We plan to support other cloud providers in the future. Don't hesitate to contact us with questions about any project on Github.

Depending on your infrastructure and needs, there are many Thanos implementations that may be suitable for you.

If you want to study Thanos in depth, you can check their official Kube Thanos repository and their suggestions on cross cluster communication [5].

Of course, we are happy to help you set up your cloud native monitoring stack. Welcome to contact us contact@particule.io :)

You can also contact us through CNCF/Kubernetes Slack channel every day.