Python tells you: what are the videos of ten million net red Li Ziqi?

Yunqi information:[ Click to view more industry information]
Here you can find the first-hand cloud information of different industries. What are you waiting for? Come on! 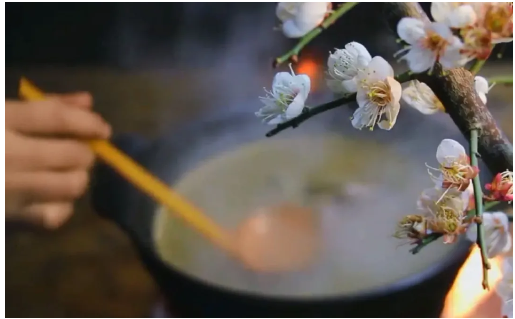 "The Li family has a daughter, who is called Ziqi." If we talk about the most popular online red, I think many people will think of Li Ziqi.

Li Ziqi can always live a poem or a painting on a seemingly ordinary day when he works at sunrise and stops at sunset.

The peach blossom is ripe in March, and it's picked to brew peach blossom wine. In April, loquat ripens, making loquat wine With different seasons, people who have made different delicacies and watched liziqi video yearn for the ancient rural life in that video, and at the same time, it also brings the healing power to countless people.

At present, Li Ziqi has 5.79 million fans in station B. Up to now, only 125 videos have been released, but almost every video is a blockbuster.

So, what are the characteristics of her videos? Which is the most popular video? Today we will take you to interpret Li Ziqi with data.

Why is Li Ziqi's video so attractive?

We use Python to analyze 125 videos released by Li Ziqi on station B. The analysis process consists of the following three steps:

First, see the number of videos released by Li Ziqi in each year on station B. 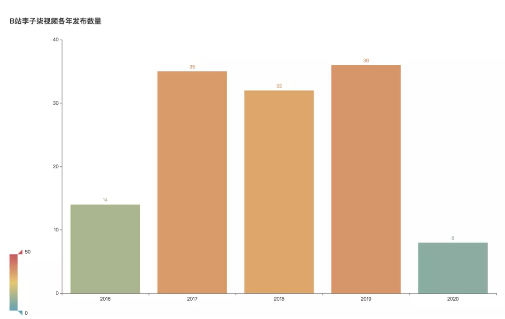 From July 2016, Li Ziqi released the first video in station B. According to statistics, she released 14 videos in 2016. The number of videos released in 2017-2019 is almost the same, all of which are about 34, with an average of 2.8 videos released every month. So far, eight videos have been released in 2020.

It's said that Li Ziqi can feel the changes of the four seasons in her videos. In which months did she release the most videos?

What are the characteristics of video release time? 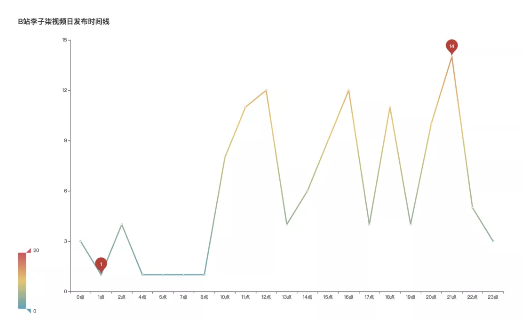 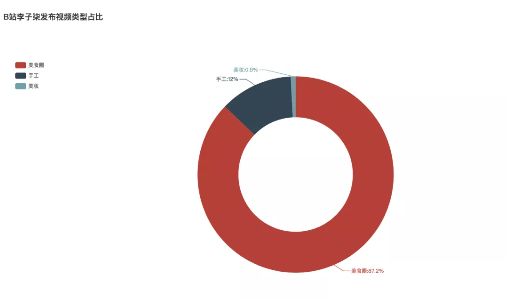 In terms of video type, of course, food is the most, accounting for 87.2%. The second is manual video, accounting for 12%. The least is beauty videos. Only one of the 125 videos released at present is of beauty type. 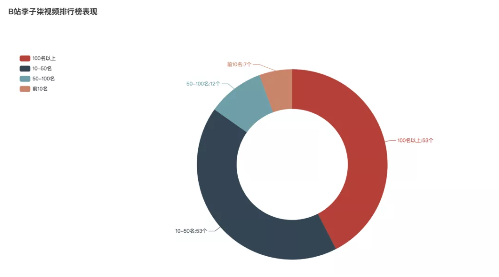 Next, we can see the average performance of all kinds of data in Li Ziqi video. 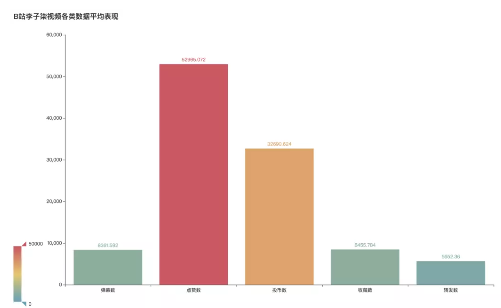 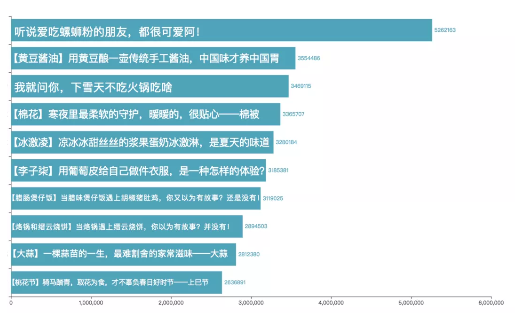 Let's take a look at them separately. First of all, the top 10 videos are the most popular. The most popular video is "it's said that friends who love eating snail powder are lovely!" and the number of videos has reached more than 5.26 million. It seems that snail powder is indeed a proper national online red snack.

What's on the screen of this video? 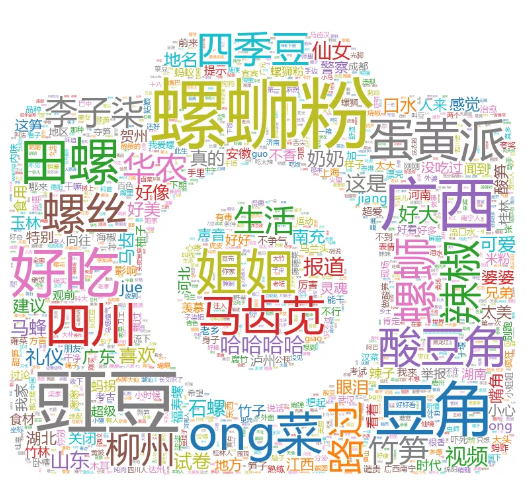 It can be seen that in the video of snail powder with the highest amount of play, the most frequently discussed materials in the screen are "snail", "snail", "bean", "pepper", "cowpea", etc. The origin of "Guangxi" is also mentioned. Interestingly, the main up food area with the theme of snails powder, such as "egg yolk pie", was also mentioned in the screen. 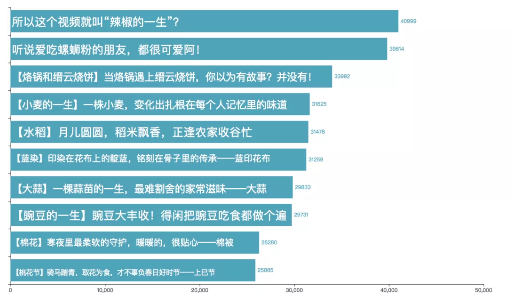 What's on the screen of this video? 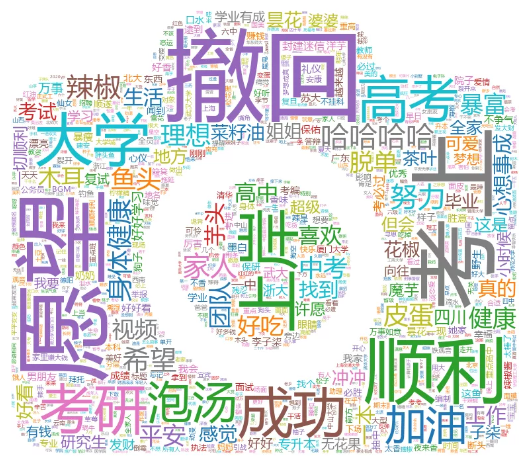 The bullet screen of this video is particularly interesting. The most discussed words in the bullet screen are all kinds of wishing Related words, such as "go ashore", "take the exam", "take the postgraduate entrance examination", "success", "smooth", "refueling", etc., which are mentioned the most frequently. 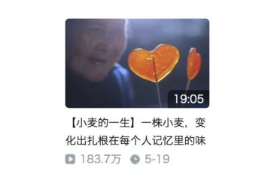 First, we can see the word cloud characteristics of the key words. We can see that in addition to "plum seven", "peach blossom", "preserved meat" and "pea", the key words are all ingredients with high frequency. At the same time, "manual" is also a high frequency word. Secondly, the "life" of a certain kind of food material is also the theme that Li Ziqi is keen on shooting. 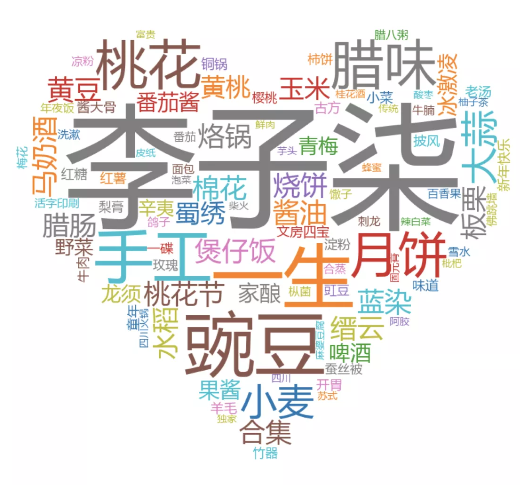 So what are the characteristics of video title description? 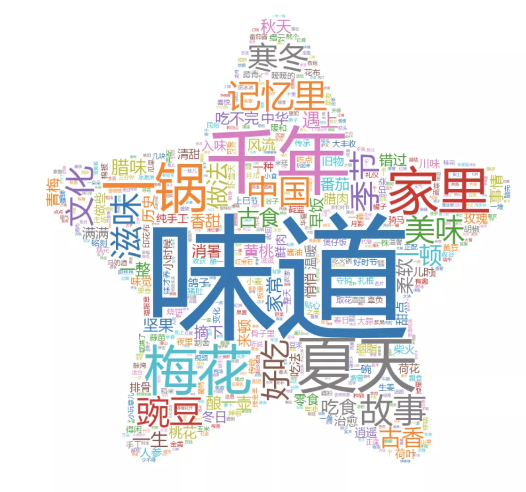 The analysis found that "taste" appeared the most frequently, far more than other words. Secondly, the words "summer", "Millennium", "home" and "memory" appear frequently.

02: what are Li Ziqi's videos shooting?

Python obtained 125 video related information released by Li Ziqi on station B, and made the following analysis. The analysis process is as follows:

The official account dialog box answers Li Ziqi, and gets the complete data. 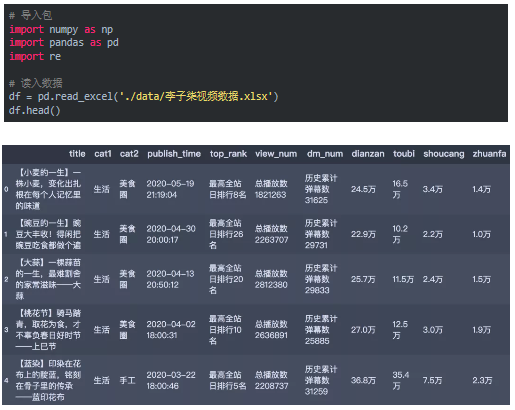 In this part, we preliminarily process the following information, including:

The processed data are as follows:

Here we will do the following visual analysis. First, we import the required package, where pyecharts is used to draw dynamic visual graphics, and stylecloud is used to draw word cloud maps. The key codes are as follows:

Join the community immediately, face to face with experts, and keep abreast of the latest news of the course!
[yunqi online classroom community] https://c.tb.cn/F3.Z8gvnK