This article has been included in the github repository, which is used to share Java related knowledge summary, including Java basics, MySQL, Spring Boot, MyBatis, Redis, RabbitMQ, computer network, data structure and algorithms, etc. Welcome to pr and star!

If github is not accessible, you can access the gitee repository. 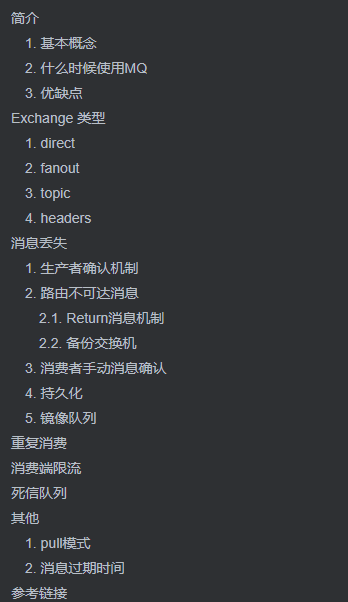 RabbitMQ is a message queue developed by erlang. Message queues are used for asynchronous collaboration between applications.

Publisher: The producer of the message.

Exchange: Receives messages and routes them to one or more Queues. default exchange is the default direct switch with an empty string name. Each new Queue is automatically bound to the default switch with the same routing key name as the Queue name.

Binding: Associate Exchange with Queue through Binding so that Exchange knows which Queue to route messages to.

Queue: Stores messages and queues are first in, first out. A message can be distributed to one or more queues.

Virtual host: Each Vhost is essentially a mini version of RabbitMQ server with its own queues, switches, bindings, and permissions mechanisms. Vhost is the basis of the AMQP concept and must be specified at connection time. RabbitMQ defaults to Vhost /. When multiple different users use the same RabbitMQWhen servers provide services, they can be divided into multiple vhosts, and each user creates exchange s and queues in his own vhost.

When to use MQ

For operations that do not require immediate effect, they can be split up, executed asynchronously, and implemented using message queues.

For example, in a common order system, the business logic after a user clicks on an order button may include: deducting inventory, generating the corresponding document, sending a text message notification. In this scenario, you can use MQ. Place the text message notification into the MQ asynchronous execution, and the main process of the order (such as deducting inventory, generating the corresponding document)Send a message to MQ when finished, allowing the main process to finish quickly, while other threads consume MQ messages.

Exchange distributes messages according to different distribution strategies for different types. There are currently four types: direct, fanout, topic, headers. The headers mode routes messages based on the headers of the message. In addition, the headers and direct switches are identical, but their performance is much worse.

The direct switch routes messages to a queue where the binding key and routing key match exactly. It is a fully matched, unicast mode. All messages sent to a fanout-type switch are routed to all queues bound to that switch. A fanout-type forwarding message is the fastest. The producer sends the message to the queue and cannot ensure that the message successfully reaches the server.

In Springboot, confirm mode is set through the publisher-confirms parameter:

Provides a callback method on the production side. When the service side confirms one or more messages, the producer calls back this method, and subsequently processes the messages based on the specific results, such as resending, logging, and so on.

The producer validation mechanism only ensures that messages arrive at the switch correctly, and messages that fail to route from the switch to Queue are discarded, resulting in message loss.

There are two ways to handle non-routable messages: the Return message mechanism and the backup switch.

The Return message mechanism provides a callback function, ReturnCallback, which calls back messages when they fail to route from the switch to the Queue. mandatory needs to be set to true to listen for messages whose routes are unreachable.

When a message fails to route from the switch to Queue, it returns return exchange:, routingKey: MAIL, replyCode: 312, replyText: NO_ROUTE.

It is possible that the consumer will go down before they have time to process the MQ service, causing the message to be lost. Because the messenger defaults to automatic ack, once the consumer receives the message, they will notify MQ Server that the message has been processed, and MQ will remove the message.

When the message is processed, confirm manually:

When MQ fails, the service will be unavailable. A mirroring queue mechanism of RabbitMQ is introduced to mirror queue over other nodes in the cluster. If one node in the cluster fails, it can automatically switch to another node in the mirror to ensure service availability.

After successful consumer consumption, there is network fluctuation when confirming to MQ. MQ does not receive confirmation. In order to ensure that the message is not lost, MQ will continue to deliver the previous message to the consumer. At this time, the consumer receives two identical messages. Because duplicate messages are caused by network reasons, it is unavoidable.

Solution: When sending messages, let each message carry a global unique ID. When consuming messages, first judge if the message has been consumed, and then guarantee the idempotency of message consumption logic. The specific consumption process is:

Spring RabbitMQ provides the parameter prefetch to set the number of messages processed by a single request. If the message processed by the consumer at the same time reaches the maximum value, the consumer will block and will not consume new messages until there is a message ack.

Native RabbitMQ also provides prefetchSize and global s, which Spring RabbitMQ does not have.

Queue where messages with consumption failure are stored.

Set exchange and queue for the dead letter queue, then bind:

You can also specify the ttl of the queue at the time of queue creation, starting from the time the message enters the queue, beyond which the message will be removed.

If github is not accessible, you can access the gitee repository.