We have a scenario. In the Internet scenario, the scenario of initiating an order to deduct inventory is very scenario and easy to understand. For example, a merchant does an activity and takes out a batch of goods. For example, there is 1000 inventory to do the activity. The program needs to ensure that the 1000 goods cannot be oversold, that is, the 1000 goods are sold to 1000 users, If there is oversold, there is a problem with the program, which is a very simple problem. However, in the distributed scenario, this is not a simple problem. The program should ensure thread safety, that is, ensure that all outbound actions should be executed in sequence, that is, serial execution, and there should be no concurrent deduction of inventory, In the case of a single machine, it can be completed simply through the built-in lock or AQS lock, but it becomes more complex in the distributed scenario. There are many scenarios to be considered. We will analyze them according to these scenarios.

Obviously, this program is not a thread safe program. There are problems in distributed scenarios. If concurrency is not large, there may be no errors. However, as a programmer, the code written should be rigorous. This method must be problematic and can only solve the thread safety in single machine situations. We modify the program as follows:

We use setnx of redis for distributed locking. Setnx can only succeed for the first time under the same key. After calling in java, if it is set successfully, it will return true. If the key already exists, it will return false

Format: setnx key value sets the value of the key to value if and only if the key does not exist. If the given key already exists, then
SETNX does nothing. SETNX is the abbreviation of "SET if Not eXists".
Therefore, the above code:

It means to set lockKey. value is a thread Id+uuid, ttl=30s generated by the method. It will be cleared automatically after 30s. Therefore, the whole sentence means that a ttl lock is added here. If a thread obtains the lock and the system hangs during execution, the key will not be cleared, and other distributed systems will never obtain the lock, This makes it impossible for this business to continue, so a 30s timeout is added, that is, when the system hangs up, it will unlock automatically for up to 30s. We should note that the setnx instruction is to set the key and set the timeout together, because these two actions must be atomic, otherwise other situations may occur, For example, when the timeout time is set after the key is set, it will hang up, so it needs to be executed together as an atomic instruction;
If the program is executed normally and unlocked in finally, other threads can get the lock, but is there really no problem with the program?
Question 1: the code in finally is the unlocking code. The unlocking code first obtains the key, and then determines whether the value corresponding to the key is the value set by my thread. If so, release the lock. At first glance, there is no problem, but we must have distributed thinking when we build a distributed system? There is nothing wrong with these two lines of code, but from the thinking of distributed scenarios, we can know that these two lines of code are not an atomic operation. Although there are very few exceptions in the execution of these two lines of code, there may still be problems from the perspective of the rigor of the program, so how can we turn it into an atomic operation? redis is a single thread task execution, but it does not provide a command to obtain the key and then judge whether the incoming value is equal. The solution is to use lua script to encapsulate and execute it as an atomic instruction;
Question 2: what is the problem from the timeout set above? Will there be a problem that the thread starts to execute after it gets the lock, and other threads are blocked, but the timeout you set is 30s? Will there be a problem that the thread that gets the lock does not complete execution after 30s? At this time, the lock fails, and other threads will get the lock and can execute. The problem is in this scenario, Data security can not be guaranteed, that is, in some cases with high concurrency, thread safety problems will occur in case of slow program execution. Although the probability of this situation will not be too high, as a rigorous developer, this is not intolerable.

Based on the above two problems, how can we solve them? What we need to solve are the atomic problem of instruction execution and the life extension of lock. If we can solve it and have high performance, we can solve the problem of thread safety in this distributed scenario. So how can we solve it?
1. For the atomic problem of lock, with the help of lua script, all the instructions in one thing can be executed in Lua script to ensure that all instructions are not executed or not executed. Anyway, it can not be a success or a failure;
2. The problem of lock renewal: This is to be implemented by developers themselves. After obtaining a lock, you can open a thread task to judge whether the task is completed. If the execution is not completed, the lock renewal will be carried out. If the execution is completed, the set lock will not exist, and other threads can get the lock. 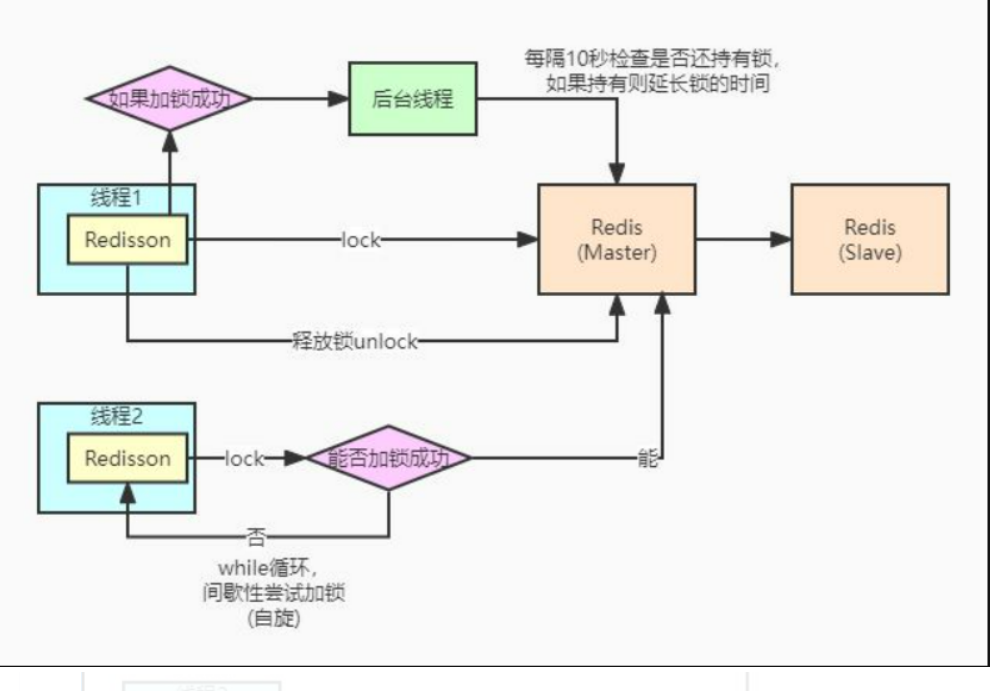 Redisson solves the problem of distributed locks, which is a high encapsulation of Redis. Redisson is a Java in memory data grid based on Redis. On the Netty framework based on NIO, redison makes full use of a series of advantages provided by Redis key value database, and provides users with a series of common tool classes with distributed characteristics on the basis of common interfaces in Java Utility Kit. The toolkit originally used to coordinate single machine multithreaded concurrent programs has the ability to coordinate distributed multi machine multithreaded concurrent systems, which greatly reduces the difficulty of designing and developing large-scale distributed systems. At the same time, combined with various characteristic distributed services, it further simplifies the cooperation between programs in the distributed environment
It's very easy to use redission. The simpler the framework is used, the more the underlying encapsulation is. I think so. The program to become redission is as follows:

Three lines of code, and two lines of code for locking and unlocking. It is very simple, but it solves the problems we haven't solved above, the problem of atomic instructions and the problem of Lock life extension. Its use is the same as that of our Aqs Lock, because as a distributed Lock, it implements the standard interface Lock of jdk 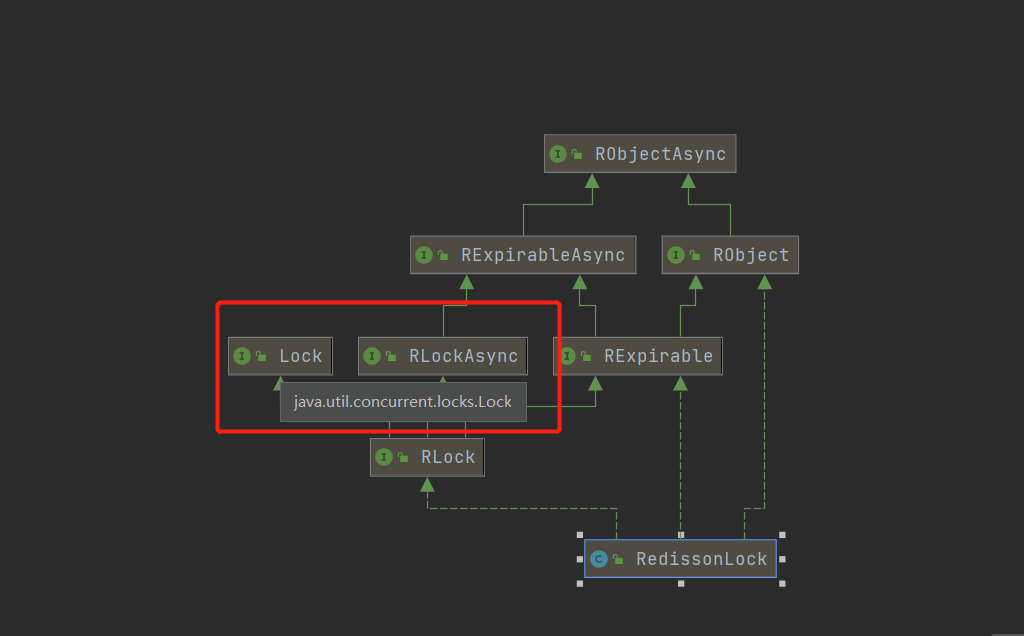 When we call getLock(lockKey) in the above program, we will enter the getLock method in Redisson, where name is the lockKey we import.

As shown in the figure above, this kind of problem really occurs in some extreme cases when redis architecture makes distributed locks. We all know that there are two kinds of persistence schemes of redis, one is RDB, that is, how many commands are executed in how long will persist an RDB snapshot, and the other is aof, which has several options, However, for the sake of redis's high performance, aof will be executed in less than 1s, and aof will not be executed in every instruction. Therefore, for the aof persistence scheme, 1s of data will be lost at most. For systems with low concurrency, it is not a big problem. If the concurrency is particularly high, 1s of data may be distributed lock data, In the above figure, the thread can obtain the data from master node 1 when the master lock is not obtained from master node 2. Therefore, when the distributed thread 1 loses the data from master node 1, the thread can obtain the data from master node 2 when the master lock is not executed, In this way, a serial execution becomes a parallel execution, and the protection of shared resources has been lost. This situation can also be called distributed thread safety in distributed scenarios;
But it is still necessary to say that the probability of this situation is too small. It is only necessary to analyze the problem comprehensively and be strict when it comes to its realization. The point of rigor will always be correct. Analyze according to the business volume of its own, and do not over analyze and design. If the concurrency is very small, it is unnecessary to consider too much.

RedLock says it can be solved online. I don't think so. Red lock is to engage in several redis unrelated nodes to do distributed locks. Only more than half of the nodes can be considered successful. However, it can't be done in extreme cases. For example, three unrelated redis nodes are used to do red locks, The condition for successful locking is that half of the three redis nodes are successfully locked, which means successful locking. However, if one node hangs after successful locking, and there are only two nodes when another thread locks, it may not succeed. However, if the restarted redis node data fails to persist due to some reasons, and the lock data is lost, The second thread can also lock successfully. Even if you add a slave node to redis, there will also be problems. In the business scenario of distributed lock, there is no 100% scheme, which can only be guaranteed as much as possible. In my opinion, it is better to directly use zookeeper as a distributed lock with redis's red lock. Zookeeper's natural CP architecture ensures the data consistency protocol, Its ZAB protocol can ensure the correctness of distributed lock. Because zookeeper will think it will succeed after more than half of the nodes are successful each time they write node data. Even if the leader is hung, the new leader node also has the previous node data. Therefore, in the distributed lock scenario, zookeeper is more stable than redis, but why is zookeeper used to do distributed lock?
1. Redis is a commonly used Middleware in the project, and the high performance of redis based on memory database is the first choice, mainly due to its high performance. This is the most important. It is acceptable even if there are occasional cache problems.
2. If zookeeper has no other use in the whole architecture and is only introduced to be a distributed lock, it will increase the maintenance cost of the system, and its performance is certainly not as good as Redis.