With the development of the times and the progress of science and technology, applications on the market have a large amount of data storage all the time
If the relational database is used uniformly, the data in the file disk will be read through IO every time the data is loaded
It will greatly reduce the carrying capacity and performance of the system, because IO reads the disk, and the addressing of the disk is ms level, and the speed will be affected by the bandwidth of the hard disk
Based on the above scenarios, non relational storage came into being. Among them, redis is the best representative of key value storage
Because redis stores data based on in memory. Memory addressing is nanosecond (ns) (s > MS > US > ns)
Therefore, disk addressing will be 10W slower than memory addressing, and the bandwidth of disk is generally G/M. the bandwidth of memory will be much larger than that of disk

3, What can Redis do for us

1, Under the hot data with large amount of data and frequent queries, redis can reduce the pressure on the database
2, Because redis is memory level storage, the response of data is very fast, which can improve the high availability of our program

4. Use the tool to generate multiple redis processes (optional)

At this point, the redis installation can be concluded

Redis is stored by the key value data structure. There are different types and object information in the key
The key value value in Redis is binary safe, which means that any binary sequence can be used
Key also has a corresponding type. You can use TYPE KEY_NAME view the type of key
You can also use the Object endcoding key to view the internal codes of. The type diagram of each type is as follows 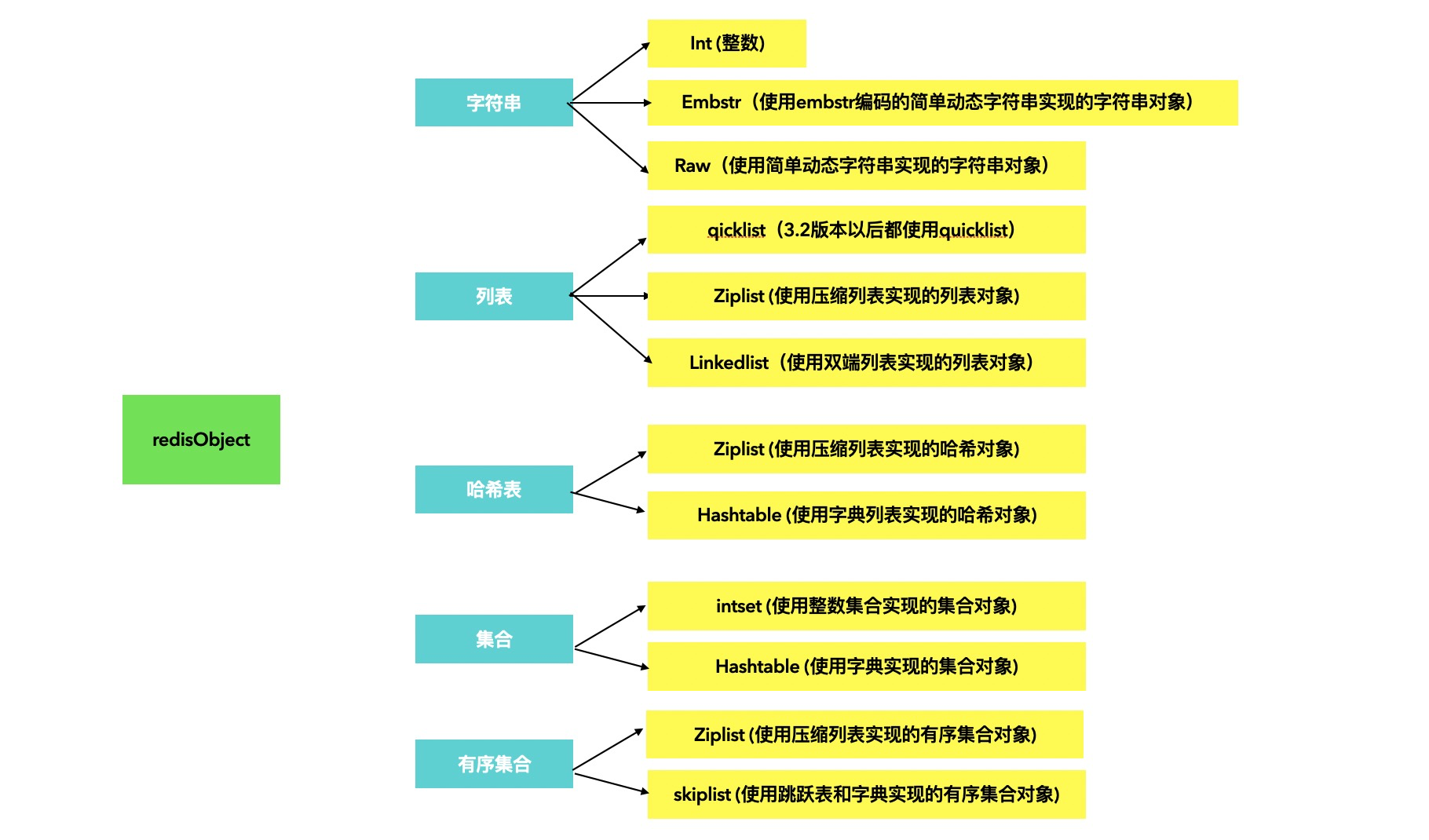 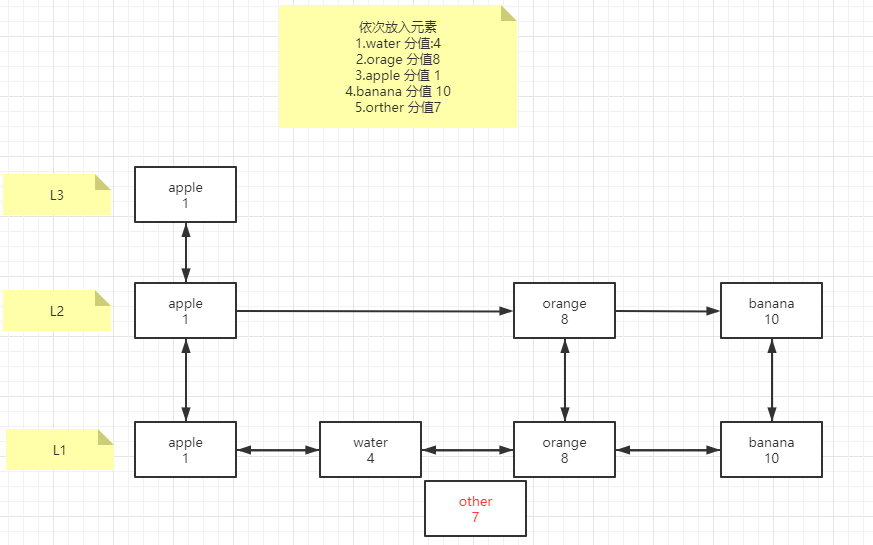 The bottom layer of sorted set is implemented based on the jump table. According to the illustration and case, the explanation process is as follows
1. When the first four elements are inserted in turn, they will be randomly layered. When other elements are to be inserted
2. According to the score 7, if the first layer is larger than the last element of the first layer, it will fall to L2 layer
3. If 7 is smaller than 8 after the L2 layer is compared in turn, find the position of the L1 layer orange, compare it forward, and select the index position of the element to be inserted

The specific commands corresponding to each type can be viewed through the official website of redis or the client through instructions such as helpo @string
Chinese official website address http://redis.cn/topics/data-types-intro.html

The sender (publisher) is not planning to send a message to a specific recipient (subscriber). Instead, the published news is divided into different channels, and there is no need to know what kind of subscribers subscribe to it. Subscribers who are interested in one or more channels only need to receive the messages they are interested in, and do not need to know what kind of publishers publish them. This decoupling of publishers and subscribers can bring greater scalability and more dynamic network topology

1. When redis is used as a cache, when you add data, it is very convenient for him to automatically recycle the data
2.LRU is the only recycling method supported by Redis
3.maxmemory configuration instruction is used to configure the limited memory size when Redis stores data
4. Through redis Conf can set this instruction, or use the CONFIG SET command to configure maxmemory 100mb at runtime
5. Setting maxmemory to 0 means there is no memory limit. This is the default value for 64 bit systems, and the default memory limit for 32-bit systems is 3GB.
6. When the specified memory limit is reached, you need to choose different behaviors, that is, strategies. Redis can only return an error to the command, which will make more memory used, or recycle some old data to avoid memory limitation when adding data

Redis persistence provides two different levels of persistence methods:
1:RDB persistence can snapshot and store your data at a specified time interval
2. The AOF persistence mode records every write operation to the server
When the server restarts, these commands will be re executed to recover the original data
The AOF command uses redis protocol to append and save each write operation to the end of the file
Redis can also rewrite AOF files in the background, so that the volume of AOF will not be too large

The AOF file is a log file that is only appended. It orderly saves all writes to redis in the format of redis protocol
You can use different fsync strategies: no fsync, fsync per second, and fsync every time you write Use the default fsync per second policy
fsync is handled by the background thread, and the main thread will try its best to handle the client request). In case of failure, you can lose up to 1 second of data

Because the operation mode of AOF is to continuously append commands to the end of the file, the file volume of AOF will become larger and larger with the continuous increase of commands
For example, if you continuously set the values of 1 and 2 for a key 1w times, the AOF file needs to use 1w records.
However, in fact, the value of this key is the last written value, and the remaining 9999 are redundant
To handle this situation, rebuild the AOD file, execute BGREWRITERAOF command, and Redis will generate a new file
This file contains the minimum commands required to rebuild the current dataset

Generally speaking, if you want to achieve data security comparable to PostgreSQL, you should use both persistence functions at the same time.
If you care about your data very much, but can still withstand data loss within a few minutes, you can only use RDB persistence.
Many users only use AOF persistence, but we don't recommend this method: generating RDB snapshot s regularly is very convenient for database backup, and the speed of RDB recovery of data sets is faster than that of AOF recovery. In addition, using RDB can also avoid the bug of AOF program mentioned earlier.
For the reasons mentioned above, we may integrate AOF and RDB into a single persistence model in the future

Open AOF and RDB at the same time

On redis2 Before version 4. If AOF is enabled, only cancellation and repeated merging of log instruction sets will be performed
On redis2 4 and beyond. If AOF is enabled, rewriting will store the original data in the header of the AOF file in RDB
Then continue to increase the log by recording the log
So: in redis2 4 and later versions, AOF is a hybrid. The speed of RDB and the total amount of AOF are utilized

From the summary of the notes above, we can draw a few points:
1.Redis is a memory based Middleware that can be used as a cache / database
2. The persistence mode of redis and the implementation principle of AOF and RDB
3. Characteristics and usage scenarios of each data type of redis