Redis or Zookeeper for distributed locks?

Distributed locks are usually implemented in the following ways:

In actual development, Redis and Zookeeper are mostly used, so this article only talks about these two.

Before discussing this issue, let's take a look at a business scenario:

System A is an e-commerce system. At present, it is deployed on A machine. There is an interface for users to place orders. However, users must check the inventory before placing orders to ensure that the inventory is sufficient.

The system architecture is as follows: 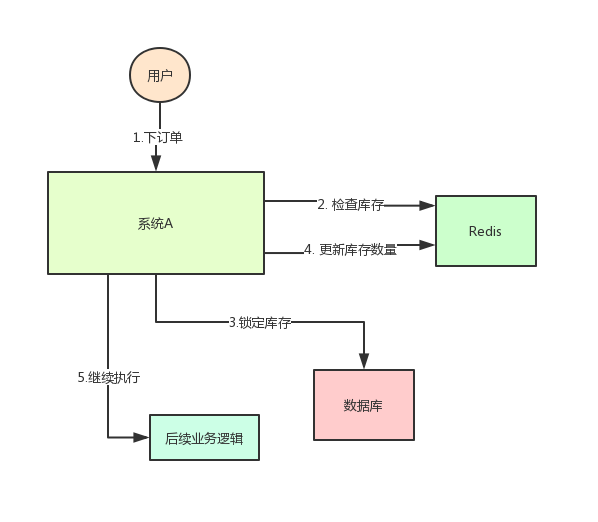 But this will cause a problem: if at a certain time, the inventory of a commodity in redis is 1, then two requests come at the same time. One request is executed to step 3 of the above figure, and the inventory of the database is updated to 0, but step 4 has not been executed yet.

When another request is executed to step 2, if it is found that the inventory is still 1, continue to step 3.

As a result, two goods were sold, but there was only one in stock.

It's obviously wrong! This is a typical inventory oversold problem

At this time, it is easy to think of a solution: Lock steps 2, 3 and 4 with a lock. After they are completed, another thread can come in and execute step 2. 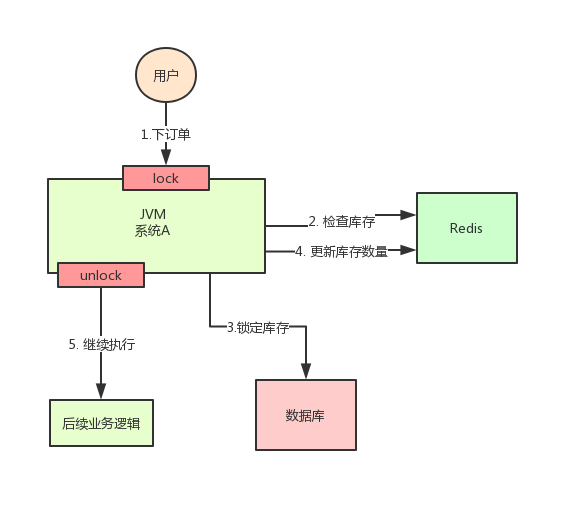 According to the above figure, when executing step 2, use synchronized or ReentrantLock provided by Java to lock, and then release the lock after executing step 4.

In this way, the steps 2, 3 and 4 are "locked", and multiple threads can only be executed serially.

But the good time is not long. The concurrency of the whole system soars, and one machine can't carry it. Now add a machine, as shown in the following figure: 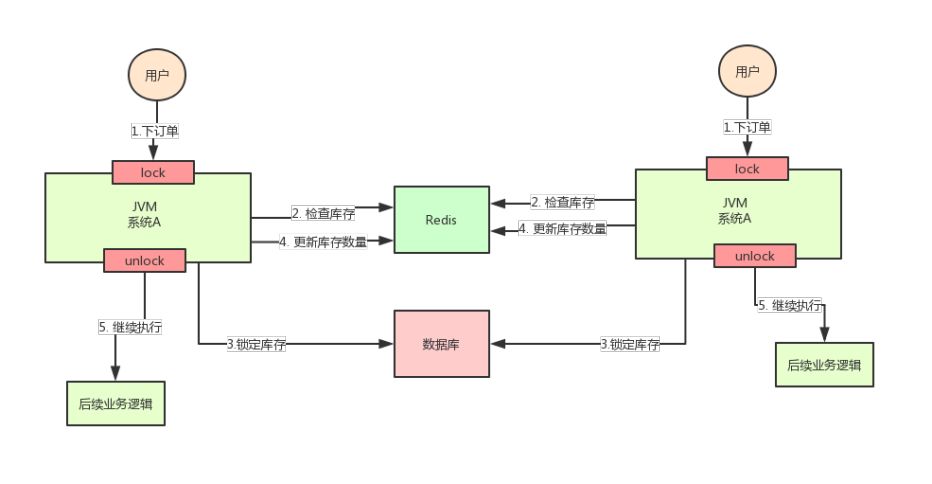 After adding the machine, the system becomes as shown in the figure above, my God!

Why? Because the two A systems in the above figure run in two different JVMs, the locks they add are only valid for the threads in their own JVMs, but not for the threads of other JVMs.

Therefore, the problem here is that the native locking mechanism provided by Java fails in the scenario of multi machine deployment

This is because the locks of the two machines are not the same lock (the two locks are in different JVM s).

Then, as long as we ensure that the locks added by the two machines are the same lock, won't the problem be solved?

Provide a global and unique "thing" to obtain the lock in the whole system, and then ask this "thing" to get a lock when each system needs to lock, so that different systems can be regarded as the same lock.

As for this "thing", it can be Redis, Zookeeper or database.

The text description is not very intuitive. Let's look at the following figure: 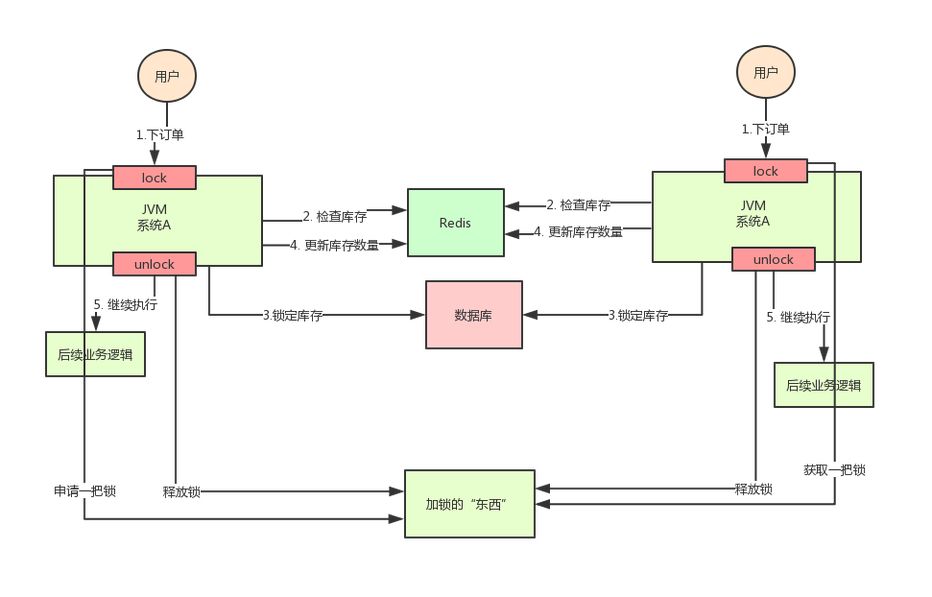 Through the above analysis, we know the inventory oversold scenario. In the case of distributed deployment system, using Java's native locking mechanism can not ensure thread safety, so we need to use the distributed locking scheme.

So, how to implement distributed locks? Keep looking down!

The idea of using redis as a distributed lock is like this: set a value in redis to indicate that the lock is added, and then delete the key when the lock is released.

The specific code is as follows:

There are several main points of this approach: 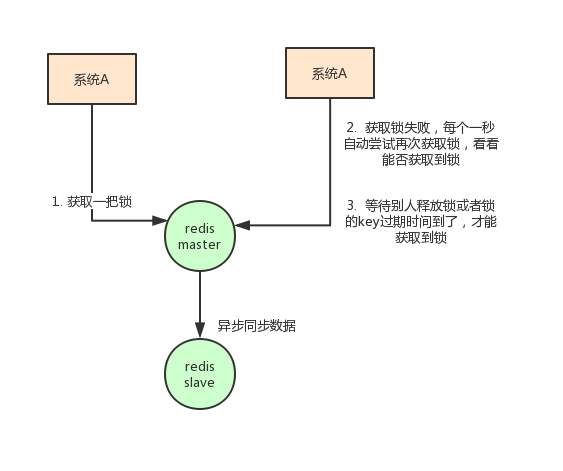 In addition to considering how the client implements distributed locks, we also need to consider the deployment of redis.

redis can be deployed in three ways:

The disadvantage of using redis as a distributed lock is that if the single machine deployment mode is adopted, there will be a single point of problem as long as redis fails. You can't lock it.

The master slave mode is adopted. When locking, only one node is locked. Even if high availability is made through sentinel, if the master node fails and master-slave switching occurs, the problem of lock loss may occur.

Based on the above considerations, in fact, the author of redis also considered this problem. He proposed a RedLock algorithm. The meaning of this algorithm is roughly as follows:

Assume that the deployment mode of redis is redis cluster. There are five master nodes in total. Obtain a lock through the following steps:

However, such an algorithm is still controversial, and there may be many problems, which can not guarantee the correctness of the locking process. 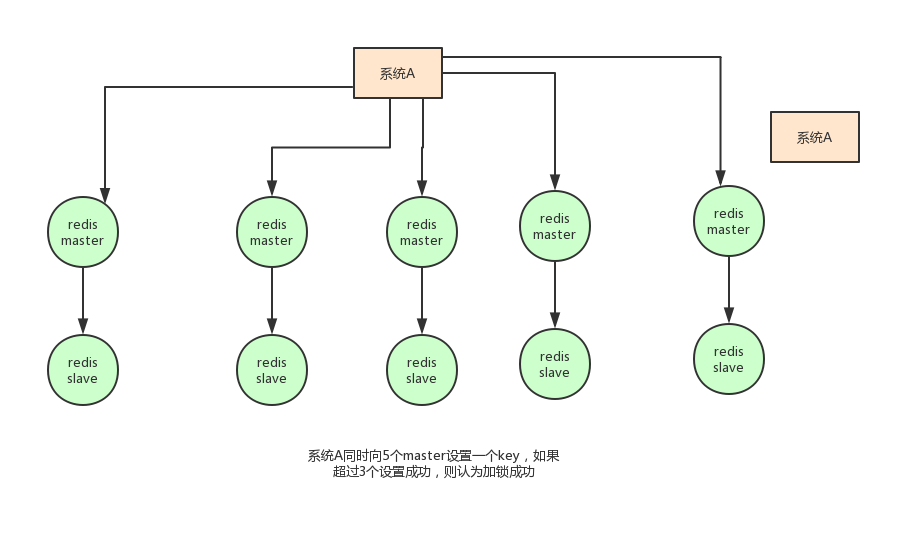 In addition, the Redis distributed lock can be implemented based on redis client's native api, and the open source framework: Redission can also be used

Redisson is an enterprise level open source Redis Client, which also provides distributed lock support. I also highly recommend you to use it. Why?

Recall the above, if you write code to set a value through redis, it is set through the following command.

The timeout set here is 30s. If I haven't completed the business logic for more than 30s, the key will expire and other threads may get the lock.

In this way, the first thread has not finished executing the business logic, and the thread safety problem will also occur when the second thread comes in. So we need extra to maintain the expiration time. It's too troublesome~

Let's see how redisson is implemented? First, feel the cool of using reission:

It's that simple. We only need lock and unlock in its api to complete the distributed lock. He helped us consider many details: 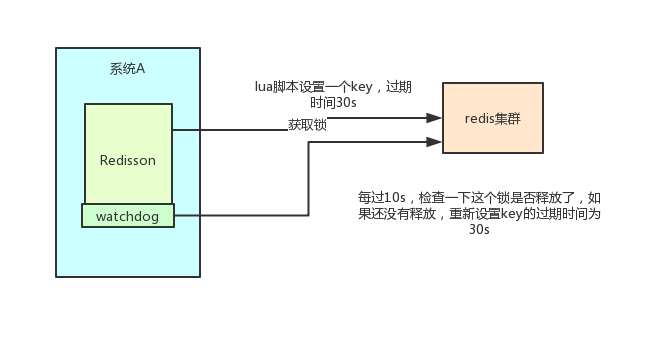 The implementation code is posted here:

Its usage is also very simple:

This section analyzes the specific implementation scheme of using Redis as a distributed lock and some of its limitations, and then introduces redison, a Redis client framework. This is also what I recommend you to use. There will be less care details than writing your own code.

Implementation of distributed lock based on zookeeper

Before introducing the mechanism of zookeeper (replaced by zk below) to realize distributed lock, let's briefly introduce what zk is:

Zookeeper is a centralized service that provides configuration management, distributed collaboration and naming.

zk's model is as follows: zk contains a series of nodes called znode, just like a file system. Each znode represents a directory, and then znode has some features:

Based on the characteristics of zk mentioned above, we can easily get the landing scheme of using zk to realize distributed lock:

If the lock is released, the node with the next sequence number will be awakened, and then step 3 will be performed again to determine whether its own node sequence number is the smallest.

The whole process is as follows: 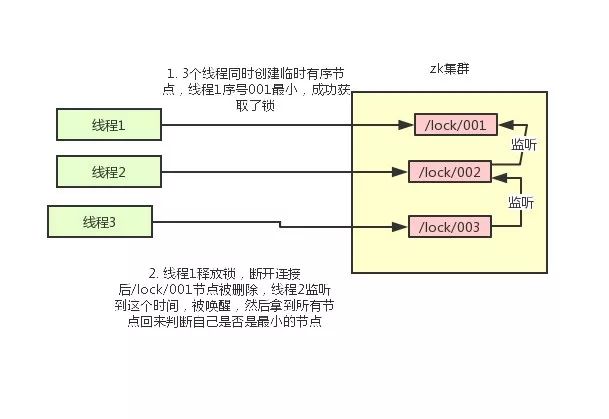 The specific implementation idea is like this. As for how to write the code, it is more complex and will not be posted.

Cursor is an open source client of zookeeper, which also provides the implementation of distributed locks.

His usage is also relatively simple:

The core source code of distributed lock is as follows:

In fact, the underlying principle of curator implementing distributed locks is similar to that analyzed above. Here we describe its principle in detail with a diagram: 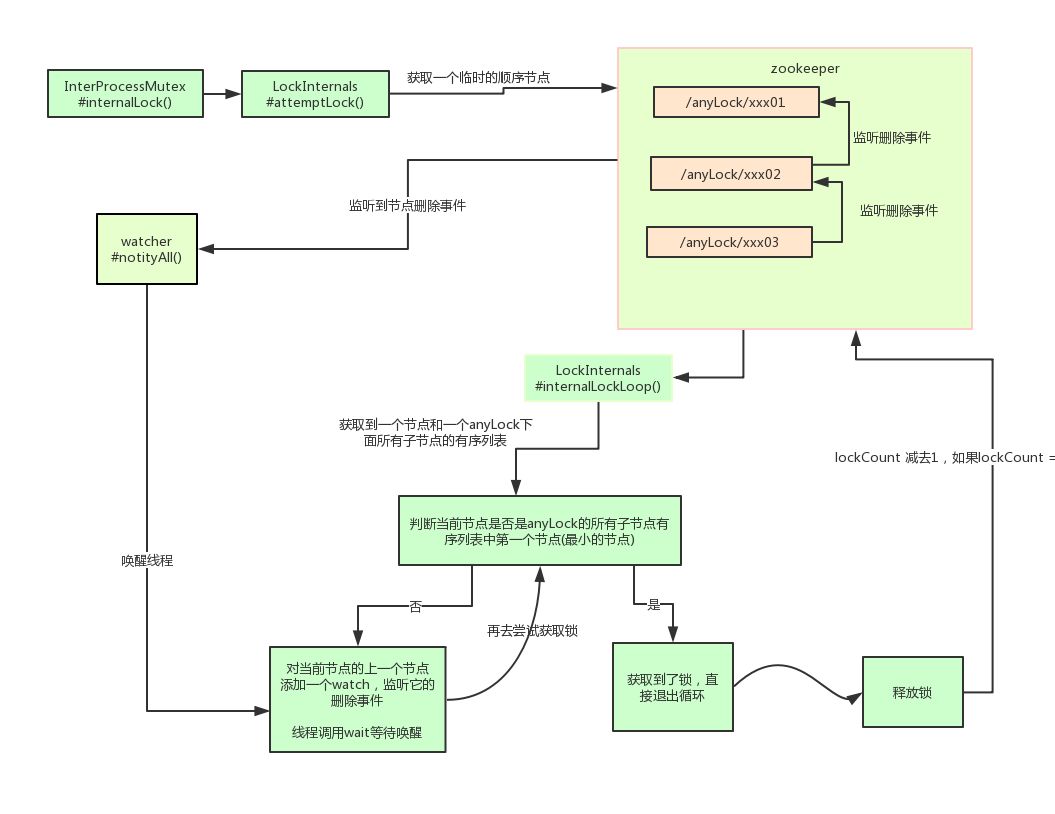 This section introduces the scheme of Zookeeperr to realize distributed lock and the basic use of zk's open source client, and briefly introduces its implementation principle.

Comparison of advantages and disadvantages of the two schemes

After learning the two implementation schemes of distributed locks, this section needs to discuss the advantages and disadvantages of redis and zk.

For redis distributed locks, it has the following disadvantages:

But on the other hand, using redis to implement distributed locks is very common in many enterprises, and in most cases, we will not encounter the so-called "extremely complex scenario".

Therefore, using redis as a distributed lock is also a good scheme. The most important thing is that redis has high performance and can support highly concurrent lock acquisition and release operations.

But zk also has its disadvantages: if more clients frequently apply for locking and releasing locks, the pressure on zk cluster will be greater.

To sum up, both redis and zookeeper have their advantages and disadvantages. We can use these problems as reference factors when making technology selection.

Through the previous analysis, two common schemes for implementing distributed locks: redis and zookeeper, each of which has its own merits. How to select the type?

Because Redis may have hidden dangers, which may lead to incorrect data. However, how to choose depends on the specific scenario in the company.

It can also be realized by using redis. In addition, the system designer may choose redis when considering that the system already has redis, but does not want to introduce some external dependencies again. This is based on the architecture of the system designer.