(1) The core of Java reflection mechanism is to dynamically load classes and obtain class details when the program is running, so as to operate the properties and methods of classes or objects. The essence is that after the JVM obtains the class object, it decompiles it through the class object to obtain various information of the object.

(2) Java is a language that compiles first and then runs. The type of object in the program is determined at the compilation time. When the program runs, it may need to dynamically load some classes. These classes are not loaded into the JVM because they were not used before. Through reflection, you can dynamically create objects and call their properties at run time without knowing who the running object is at compile time in advance.

First, we have an interface X and its method test, and two corresponding implementation classes A and B:

In general, we need to directly create a new implementation class. See the following code:

According to the above description, if hundreds of different X implementation classes need to be created, don't we need to write thousands of if statements to return different X objects?

Let's look at how the reflection mechanism works:

Pass in the package name and class name to the create2() method, dynamically load the specified class through the reflection mechanism, and then instantiate the object.

After reading the above example, I believe you have a certain understanding of reflection. Reflection has the following four functions:

The above function of dynamically obtaining information and dynamically calling objects is called the reflection mechanism of Java language.

During program running, the JVM always maintains a type ID called runtime for all objects. This information tracks the complete structure information of the class to which each object belongs, including package name, class name, implemented interface, owned methods and fields. You can access this information through a special Java class, which is the class class. We can understand a class class as a class type. A class object is called a class type object. A class object corresponds to a. Class file loaded into the JVM.

In general, there must be classes before objects. Taking the following code as an example, the normal loading process of a class is as follows:

First, the JVM will compile your code into a. Class bytecode file, and then load it into the memory of the JVM by the Class Loader. At the same time, it will create a class object of Date class and store it in the heap (note that this is not a new object, but a class type object). Before creating a Date object, the JVM will first check whether its class is loaded and find the class object corresponding to the class. If it is loaded, allocate memory for it, and then initialize new Date().

It should be noted that each Class has only one Class object, that is, if we have the second new Date() statement, the JVM will not generate another Class object of Date because one already exists. This also allows us to use the = = operator to compare two Class objects:

Say it in more detail and explain it again. As mentioned above, under normal circumstances, there must be classes before objects. We call this normal situation "positive". Then the "anti" in reflection can be understood as finding the class to which the object belongs (the source of the object) according to the object

4, Four ways to get Class objects

From the source code of Class, we can see that its constructor is private, that is, only the JVM can create Class objects. We can't directly new a Class object like an ordinary Class.

We can only get a Class object from an existing Class. Java provides four ways:

The first type: you can use when you know the specific class:

However, we generally do not know the specific Class. We basically obtain the Class object by traversing the Class under the package. The Class object obtained in this way will not be initialized.

The second method: pass in the full class name through Class.forName() to obtain:

The actual call inside this method is forName0:

The fourth method is to pass in the classpath through the classloader xxclassloader. Loadclass()

The Class object obtained through the Class loader will not be initialized, which means that static blocks and static objects will not be executed without some steps including initialization. Here's a comparison with forName.

4. Construct an instance of a class through reflection

We introduced the method of obtaining Class objects above. After successful acquisition, we need to construct an instance of the corresponding Class. Here are three methods. The first one is the most common, and the last one can be understood by everyone.

Created an instance with the same class type as alunbarClass2.

② Get the constructor first and then call it through reflection

Since not all classes have parameterless constructors or class constructors are private, Class.newInstance cannot satisfy if we still want to instantiate objects through reflection. 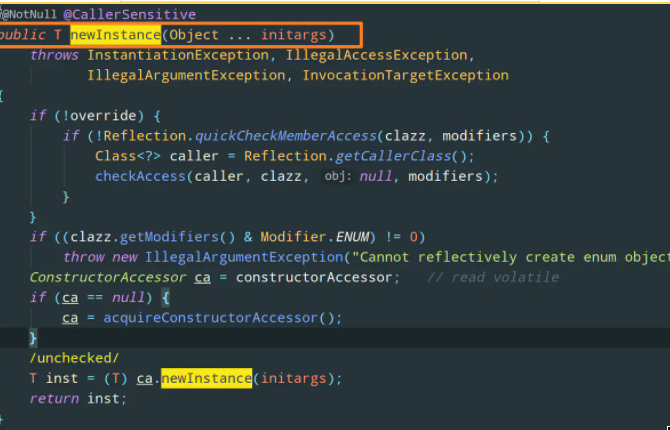 Constructor.newInstance is the method that executes the constructor. Let's take a look at the channels through which the constructor can be obtained. The following methods are easy to remember and understand. The return values are received through the Cnostructor type.

1) Gets all "public" constructor methods

2) Get all construction methods (including private, protected, default and public)

1) Gets a public constructor of the specified parameter type

2) Gets a constructor of a specified parameter type, which can be private, protected, default, or public

Objenesis is an open source library. Like the second method above, you can call any constructor, but the encapsulation is relatively simple:

It is very simple to use. Objenesis is implemented by the subclass objenesisobjenesistd. The detailed source code will not be studied here. Just understand it.

5. Get member variables through reflection and use

Similar to obtaining constructors, obtaining member variables is also divided into batch obtaining and single obtaining. The return value is received through the Field type.

1) Get all public fields

2) Get all fields (including private, protected and default)

1) Gets a public field with the specified name

2) Gets a field with a specified name, which can be private, protected and default

After getting the member variables, how to modify their values?

6. Get member methods through reflection and call

Similarly, the Method of obtaining members can be divided into batch acquisition and single acquisition. The return value is received through the Method type.

1) Get all "public methods" (including the methods of the parent class and, of course, the Object class)

2) Get all member methods, including private (excluding inherited)

Gets a member method with the specified method name and parameter type:

How do I call methods after I get them? 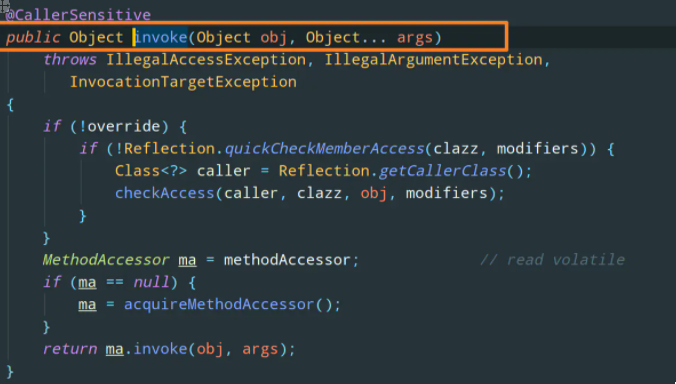 7. Advantages and disadvantages of reflection mechanism

Advantages: it is flexible and can dynamically obtain class instances at run time.

1) Performance bottleneck: reflection is equivalent to a series of interpretation operations to inform the JVM of what to do. The performance is much slower than that of direct Java code.

2) Security problem: reflection mechanism destroys encapsulation, because private methods and fields of a class can be obtained and called through reflection.

Reflection is not directly used in our actual programming, but in fact, many designs are related to the reflection mechanism, such as:

Why dynamic proxy uses reflection mechanism will be explained in detail in the next article.

In JDBC operation, if you want to connect to the database, you must follow the following steps:

Reflection mechanism is the soul of Java framework design. The interior of the framework has been encapsulated, and we basically don't need to write it ourselves. In addition to Hibernate, Spring also uses many reflection mechanisms. The most typical is that Spring loads beans (creates objects) through xml configuration files, that is, Spring's IoC. The process is as follows: