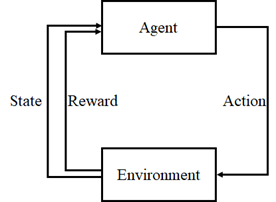 The purpose of Q-learning is to learn the value of a specific Action under a specific State. Create a Q-table, with State as the row and Action as the column, and update the Q-table through the Reward brought by each Action.

Q is Q(s,a), which is the expectation that taking Action a(a ∈ A) in the s State (s ∈ S) at a certain time can obtain benefits. The environment will feed back the corresponding Reward r according to the Action of the agent. Therefore, the main idea of the algorithm is to build the State and Action into a Q-table to store the Q value, and then select the Action that can obtain the maximum benefits according to the Q value.

The source code analysis is attached below. For partners who need formula derivation, please refer to the blogger's blog:
https://blog.csdn.net/qq_30615903/article/details/80739243

Several notes:
1. The window mentioned below can also be called canvas. I prefer to call it window;
2. At the end of the source code, a Baidu cloud link will be attached to you. Because the file is not very large, you can put it on Baidu cloud. If you put github, you may encounter problems such as lack of Intranet connectivity, which is not as good as Baidu cloud;
3. If there is any mistake in the explanation, please forgive me and inform the blogger in time to learn from each other. Thank you.

Here, the analysis is carried out according to the operation sequence:

The main file is q_learning_agent.py, first run the main function, and an env class will be generated, which inherits the parent class Env(). First initialize init:

Relevant notes are written later. Here are some difficult points. The window size is 500 × 500, the initial value is assigned at the beginning of the file. The whole action has four actions, namely, up, down, left and right movement, which have a value corresponding to 0, 1, 2 and 3 respectively;

Why is each grid in the window 100 × 100 later, here is load_ The functions of the images function can be understood in this way. It is equivalent to loading images, that is, pre loading them and then putting them into the window;

The vaguer thing here may be the for loop. The for loop means to cut the window and cut it into 5 × 5-size table similar to a grid map. As for why it is 0 ~ 400 and circulates every 100, this is the syntax feature of python. I don't explain much.

For example, the red box on the left (in fact, there is no box, just easy to understand) is a window, and the right is divided into 5 × 5.

Initialization defines several parameters, such as learning rate and coefficients of several strategies, and defines Q-table in dictionary format:

Enter the main function loop for episode in range(1000):

reset here means that after running a round, the rectangle (rectangle is equivalent to agent) is set to the origin, and the origin is 5 above × 5 the position in the upper left corner of the table;

Here is a function coords_to_state():

Enter the while loop of the main function:

env.render() is a function to update the window

Here is the selection of actions. As mentioned earlier, the actions are random at the beginning of operation. We can substitute a value for specific analysis. For example, just [0.0,0.0,0.0,0.0], enter the for loop, the index of the first loop is 0, value=0.0, and enter the elif statement to give max_ index_ Add the index index to the list. Add the index four times in a cycle. Finally, when running the return statement, max_index_list=[0,1,2,3], which means that the Q values with index values of 0,1,2,3 (corresponding to an action respectively, as mentioned earlier) are the same, so randomly select a value, such as 2, and return; 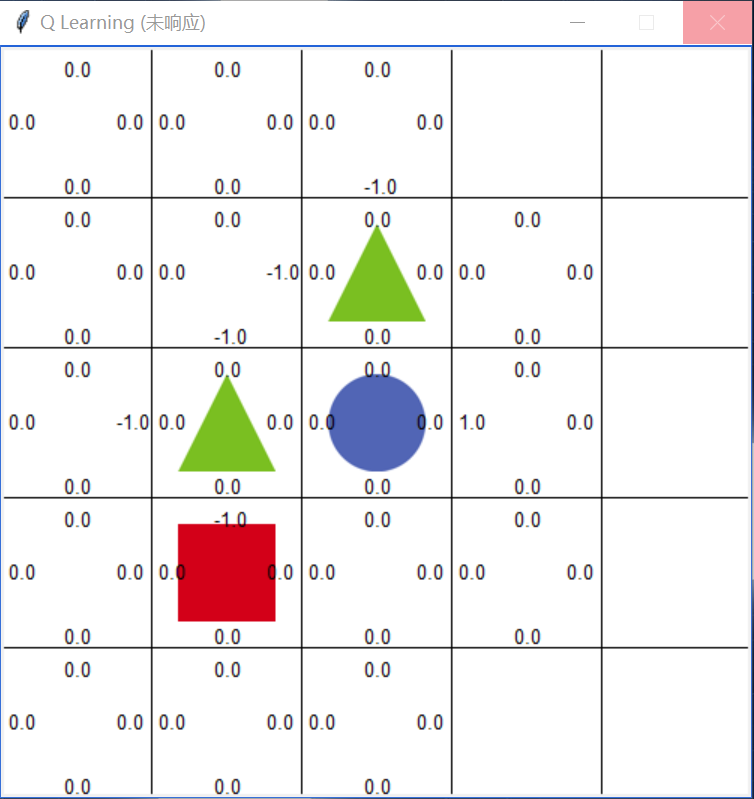 For example, in this figure, the if statement will be entered. The reason is that when traversing the four Q values where the rectangle is located, it is found that 0.0 > - 1.0, so the value of - 1.0 is cleared and only in the list max_ index_ Leave three index values index with Q value of 0.0 in the list, and then select them randomly. This meets the basic idea of Q-learning: select the actions that can obtain the maximum benefit according to the Q value.

The action to be performed in the next step has been obtained, and then the function step is to update the position of the rectangle, calculate the reward reward, and judge whether the rectangle touches a triangle (obstacle) or a circle (end point). If so, it means that the round is ended, done will return true, and then exit the while loop to restart a new round;

This part of the code is easy to understand, mainly about self canvas. tag_ Raise (self. Rectangle) is equivalent to topping, which means that if the rectangle runs to the position of a circle, for example, without this line of code, you know it runs, but you can't see it intuitively. If there is this line of code, the rectangle will cover the circle.

The following is to update the Q table:

Here is the calculation of Q value, so I won't elaborate;

This print_all_value is the Q value re released on the window. You can see it by looking at a picture. 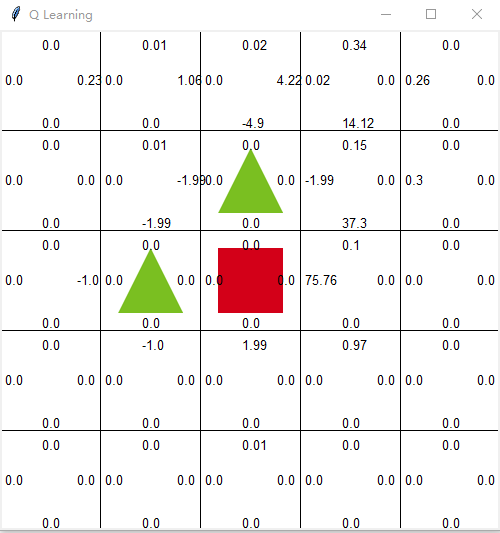