There are two main methods to realize synchronization in Java: Synchronized and Lock. In the previous article, we introduced that Synchronized is an object Lock at the JVM level. Its implementation is based on the MESA management model, while Lock is implemented by Jdk. It is also based on the MESA management model. The core implementation of Lock is ReentrantLock.

The core of Java implementation management model is abstractqueuedsynchronizer (AQS), which is an abstract class. It implements the logic of outgoing and incoming elements in waiting queue and condition queue, as well as the waiting wake-up mechanism of condition queue.

Most synchronizer implementations under Java's JUC package have common basic behaviors, such as waiting queue, conditional queue, exclusive acquisition, shared acquisition, etc. the abstractions of these behaviors are implemented in AbstractQueuedSynchronizer. AQS is an abstract synchronization framework that can be used to implement a state dependent synchronizer.

Most synchronizers in JDK are better than Lock, Latch, Barrier, etc. they use AQS. They basically inherit AQS by defining an internal class Sync, and then map all calls of the synchronizer to the corresponding methods of Sync 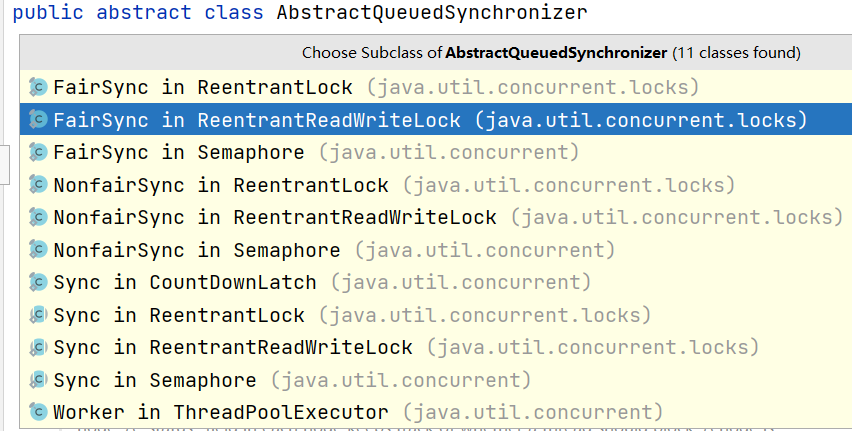 In AQS, a volatile int state attribute is maintained. This attribute indicates the available status of shared resources. Take ReentrantLock as an example, its lock() method will call AQS's tryAcquire() method, and this method is to try to modify the value of state attribute through CAS operation. If the modification is successful, it means that it has obtained the use qualification of shared resources, If the modification is unsuccessful, it will be added to the waiting queue.

The state attribute provides three ways to access and modify:

AQS inherits the AbstractOwnableSynchronizer. There is an exclusiveOwnerThread attribute in this class, which records the current exclusive thread. When judging whether it is reentry, it also calls the getExclusiveOwnerThread() method of this abstract class to obtain the exclusive thread and compare it with the current thread. If it is equal, it indicates that it is reentry and there is no need to retry to obtain the lock again.

An internal class Node is defined in AQS. The Node encapsulates the Thread object, front and rear nodes (synchronization queue), Node status and the next waiting Node (waiting queue). The Node status is divided into five categories, in which the default value is 0.

Different synchronizers compete for shared resources in different ways. When customizing the implementation of synchronizer (i.e. inheriting AQS), you only need to realize the acquisition and release of shared resource state according to specific requirements. As for the maintenance of specific threads in waiting queue and condition queue (failed to obtain lock, queue or wait for wake-up), AQS has been implemented.

When implementing the custom synchronizer, the following methods are mainly implemented. These methods are abstract methods in AQS:

The basic structure is as follows:

When we introduced the Node structure earlier, it includes two front and rear Node pointers prev and next, which are used to block the queue to form a two-way linked list, while nextWaiter indicates the next Node pointer, which is used to form a one-way linked list for conditional waiting queue 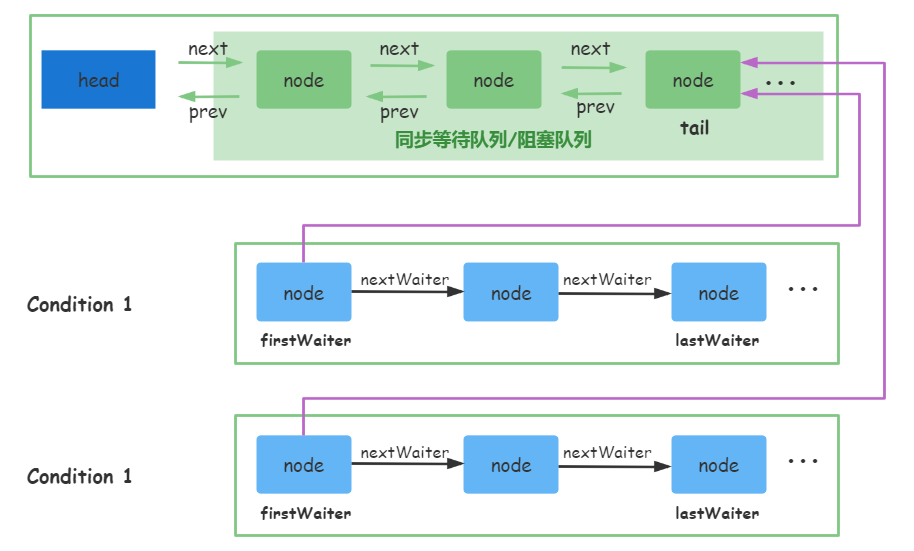 In AQS, the condition queue uses a one-way linked list to save nodes and uses the nextWaiter of nodes to connect 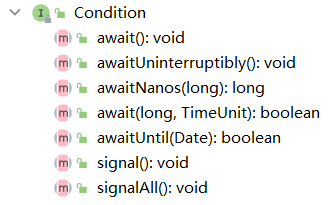 AQS implements the Condition interface through the internal class ConditionObject. In addition to implementing the above methods, addConditionWaiter() and other methods such as adding a waiting node are also defined

When await() method is called, the current thread will be encapsulated as a Node node, then added to the waiting queue and blocked

When the thread in the synchronization queue header is awakened, the call await() method will block (from synchronous queue to conditional queue).

The code is as follows. Later, we will further explain why the thread will wake up when the update to wake-up status fails:

After being awakened, the thread can compete for the lock, so when calling the Condition#signal() method, it must hold the lock. The thread holding the lock wakes up the thread blocked by calling the await() method

The following code shows the use of await() and signal() mechanisms

The printed results are as follows:

ReentrantLock is an implementation of AQS. It is a synchronization means to control thread concurrent access in JDK. Its function is similar to Synchronized. It is a mutual exclusion lock, which can ensure thread safety.

Compared with Synchronized, ReentranLock has the following features:

The main difference between fair locks and non fair locks is that when a lock is added by non fair, it attempts to obtain the synchronization state through CAS. If it succeeds, it can continue to execute. If it fails, it calls the acquire() method to try to obtain the synchronization state, while for fair locks, it calls the acquire() method directly
[external chain picture transfer fails, and the source station may have anti-theft chain mechanism. It is recommended to save the picture and upload it directly (img-sdzrio6e-1643181214248) (? X-oss-process = image / watermark, type_d3f5lxplbmhlaq, shadow_50, text_q1netibac2vybw9ubgl6agk =, size_20, color_ffff, t_70, g_se, x_16#pic_center)] 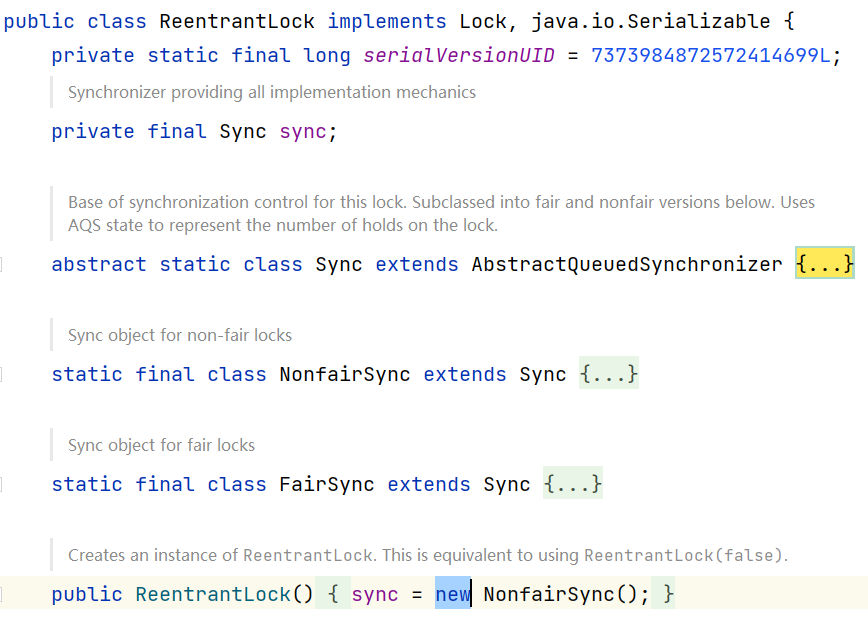 There are some differences between Synchronized and ReentrantLock:

The following code demonstrates the effect of synchronization

The tryLock() method attempts to obtain the synchronization status through CAS. If it fails, it will return directly and will not put the current thread into the waiting queue for blocking

ReentrantLock is the most important lock implementation of JDK. Many synchronizers are implemented on the basis of ReentrantLock, and it is often used as a mutually exclusive tool in development. Next, we will learn how to realize synchronization by combining the source code of lock() and unlock().

Next, take the fair lock as an example to introduce the logic of ReentrantLock locking. The lock() method mainly calls the acquire() method. For non-public flat locks, the acquire() method will also be called after the attempt to obtain synchronization fails. The basic logic is the same

The acquire() method has been implemented in AQS. It first attempts to obtain the synchronization status through the tryAcquire() method. If it fails, it calls the addWaiter() method to encapsulate the thread as a Node and add it to the synchronization blocking queue, and then calls the acquirequeueueueueueued () method to block. In the blocking method, it will judge the interrupt status of the current thread. If it is an interrupt status, The interrupt method of the thread will be called.

4.1.1 trying to get synchronization status

The following code first judges the current state attribute value. If it is not 0, it indicates that a thread has obtained the synchronization status. Because ReentrantLock supports reentrant, the else branch below will compare the current thread with the thread holding the synchronization status. If it is the same thread, it indicates that it is a reentry operation. You only need to set the state attribute value to the new value

If the state attribute value is 0, there is a hasQueuedPredecessors() method here, which is also the core difference between fair locks and non fair locks. This method will judge whether there are threads waiting in the current synchronization queue and there is no current thread in the waiting threads (i.e. not reentrant). Only when the above conditions are met, will it try to modify the state attribute value through CAS, Then set the current thread as the exclusive thread.

For fair lock, its fairness is reflected in that as long as there are other threads waiting in the synchronization queue, the new thread must also wait in the queue

If the attempt to obtain the synchronization status fails, the next step is to call the addWaiter() method to encapsulate the current thread into a Node node, and then add it to the synchronization queue to wait. For ReentrantLock, its Node type is exclusive

In AQS, exclusive and shared types are represented by two Node attributes, and then recorded by nextWaiter

In the following method, first, the current thread is encapsulated into a Node node according to the node type. If the tail node is not null, the current node is set to the tail node directly through CAS, and then the pointer to the front end node is adjusted.

If the setting of the tail node fails or the tail node is null, the enq() method is called to create a waiting queue (two-way linked list) or add a node

Then, combined with the spin, set the current node as the tail node through the compareAndSetTail() method, and finally exit the spin.

The addWaiter() method just encapsulates the current thread into a Node node and adds it to the blocking queue. At this time, the thread has not been blocked, and the thread blocking is completed in the acquirequeueueueueueueueued () method. This method will not only block the thread, but also try to obtain the synchronization status for the thread.

The focus of this method is for(;) It can ensure that the thread of the current node can obtain the synchronization state to execute the business logic.

If the front node is not the head node or the attempt to obtain the synchronization status fails, go back and call the shouldParkAfterFailedAcquire() method in the if below. This method is mainly used to judge the status of the front node.

If the status is SIGNAL, it means that the subsequent nodes will be awakened, so return true directly, and then call the parkAndCheckInterrupt() method to block the thread (that is, the premise of blocking must be that it can be awakened, that is, the status of its predecessor node is SIGNAL)

The implementation of shouldParkAfterFailedAcquire() is also relatively simple. If the status of the front node is SIGNAL, it will be returned directly

If the status is greater than 0, that is, the CANCELLED status, all the preceding nodes with the status of CANCELLED will be removed from the synchronization queue

If it is in other states, CAS is used to change the state of the front node to SIGNAL state, and finally false is returned

Blocking is accomplished through LockSupport's park() method. Thread blocking at JDK level is realized in this way.

Summary: it can be seen from the above steps that after calling the lock() method, the current thread will be encapsulated as a Node and added to the synchronization queue. If its front Node is not the head Node or the attempt to obtain the synchronization status fails, the state of the front Node will be changed to SIGNAL, and then the current thread will be blocked.

When it is necessary to release, change the exclusive thread to null, and then return true, indicating that the synchronization state can be released.

Whether the synchronization state can be released or not, the attribute value of state needs to be updated

If the node is null or the node state is CANCELLED, start from the tail node of the synchronization queue and traverse forward until you find the node whose first state is SIGNAL or initialization. If the node is not null, wake up the thread in the node